Mucking around with the time zones, and I just realized that there's no Newfoundland Daylight Time in the list (GMT-2:30).

Paul wrote:PS. On behalf of anyone who has had to write software that tracks time across different geographic areas, let me just say that Daylight Savings can get bent

This was made for you, Paul.

FYI, Adam's miscalculated challenge to the chat is confusing the schedule when there is a division on the day. From GMT -4 to +7 the graph doesn't know what to do at all.
Top

Adam's stream no longer fits in the formatting for me either. It used to look fine (yes, even at 43 hours) but now it looks like this.

Same error in Chrome and Firefox, for what it's worth.
Top

It seems to be tied to the time zones. It looks fine for me at -7:00, and I checked, everything west of -5:00 (inclusively) looks fine, but once I get to -4:00, it does the same thing as Dominic Appleguard posted.

Yes, sorry, awful bug report from me. As a programmer, I'm self-ashamed.

I'm on chrome too, and, for me, everything between GMT -4 to +7 looks just like Dominic's pic.
Top

Hiya. Sorry if this is a known issue, but just thought I'd mention a minor annoyance. Seems when there's a stream on Sunday which straddles the week divider (I'm in Eastern European Time, so any early stream on Sunday will typically, for me, start on Sunday and go on into Monday), it wraps to the beginning of the current week, instead of the following week. A fairly minor issue, I know, but occasionally mildly confusing at first glance. That is, of course, assuming you haven't actually invented a time machine and have gone back a week in the middle of a stream...

I just noticed that the Schedule page is already set to MY time zone instead of UTC like it used to be. That is such a tiny thing, but somehow SO awesome!

It turns out that there was a bug with the live page where shows scheduled on Sunday would appear on the Monday of the current week instead of the next week when adjusted for some timezones. I didn't noticed this as a problem because we hardly ever stream on Sunday, but with the Lava Bears Finale this week, it was causing some confusion.

In any case, it should be working now. Please let me know if you experience any other glitches with the schedule.

PS. I just noticed that elcalen totally posted this exact problem a while ago, but I must have missed it. Sorry about that!

Just want to say that I sometimes when I go to the LRL Schedule page directly, I get a page where the font hasn't loaded, and it defaults to ugly system fonts (which actually bork the schedule grid slightly). Shift-Refresh doesn't fix it. What does fix it is going to the LRR home page then going back to the Schedule page.

That's kind of annoying, and I wonder if there could be anything done about it. (I'm doing my own work-around right now of just downloading the font itself and installing it on the computer locally.)

This sounds great! I was beginning to lose interest, when the streams were just repeats of a game that didn't interest me. And I'm not super interested in Dark Souls, so I haven't been watching streams a lot lately. And I always thought solo streams with Alex or Cameron was a bit of a shame, as they both are more entertaining with a co-host. I am onboard with these changes.
Top

RustenSkurk wrote:This sounds great! I was beginning to lose interest, when the streams were just repeats of a game that didn't interest me. And I'm not super interested in Dark Souls, so I haven't been watching streams a lot lately. And I always thought solo streams with Alex or Cameron was a bit of a shame, as they both are more entertaining with a co-host. I am onboard with these changes.

I have some mixed feelings on this, as a whole. Most of the individual show changes and replacements look pretty promising, and I can understand the rationale behind it, so (while I'm probably going to miss Heather's Handhelds) I'm pretty on board with that aspect.


I do, however, have some misgivings about the time slot changes.
I suspect it might not be entirely coincidental that several of the most popular streams (AFK; Crossing The Streams; Watch + Play) were typically broadcast around Friday and the weekend. As someone in the UK, it was often possibility to get away with staying up well past midnight for those streams, because of the days they fell on, and I'd wager most of the other European viewers would agree.

It's a lot harder to justify doing that in the middle of the week, which means that while I'd like to see more Watch + Play, a midweek time slot makes those streams harder to actually catch. If Crossing the Streams' provisional Wednesday evening (LRR's local time) slot would probably render it a non-option for anyone east of the Americas.


To be clear: I'm not saying the LRR need to adjust the schedules to better suit me and others in my part of the world. It's an international fanbase and that means that inevitably some parts of it will miss out on certain streams, and that's just how it is. Just that it's now a question of how much the new content can make-up for the content that's being lost due to this in addition the content that's being retired. Most of the newer stuff sounds promising, so hopefully it won't disappoint, but we won't know until it happens.
Top

Well, it's all the personal streams going on the scrapheap with the exception of Adam's, and he only looks to have kept his on the grounds that they're filming at that time anyway.

The first stream of a game does usually turn out to be the best one, so it's not like doing away with streams where you get into a months-long slog on one game was a *bad* idea. Just really jarring, especially when it's a streamer you like (and when the chat's been thinking in terms of 'when does person X get a stream?', which most recently meant Kate and Cori).

It's something that will take some getting used to. (Especially, yes, losing Heather's Handhelds.)

I've been trying so far to get a bit of a handle on what 18 Games and Counting might look like long-term, and since the thing to be done is of a matter ultimately not up to the streamer, we're really going to have to lay down some ground rules so something doesn't come along and break everything, or so we're not stuck playing a game nobody wants to play. When James mentioned it on stream this morning, he took a test spin and #18 wound up being poker.

I'm compiling a list of games arriving at #18, and so far I've pulled the following, to give an idea of what folks might be in for (updated as I continue to compile):

As an aside, I've noticed six games that have so far been perpetually too popular to fall to #18: League of Legends, Hearthstone, Counterstrike: Global Offensive, DOTA 2, Call of Duty: Black Ops III... and Dark Souls 3.
Last edited by mtvcdm on 02 May 2016, 19:31, edited 22 times in total.
Top

I'll be honest here... I really don't like the looks of the changes. I understand that in the end, it's LRR's decision, but as a twitch subscriber, I feel like I have a right to give my feedback, and taking away the solo streams is something I just don't like.

I often watch games I'm not interested in just to hang out with the streamer, now that the single streams are gone, that feeling of hanging out with the streamer won't be as strong for me. I mean... I've watched Mario and pokemon and Kirby and final fantasy and persona and all sorts of games that I would never really play or watch under normal circumstances 'just' because I like the LRR person playing it. The new streams also feel HIGHLY experimental and to start six of them, at least, all at once while cutting half of the current lineup to make room for them seems like a mistake.
Five exclamation marks, the sure sign of an insane mind. -Terry Pratchett
Hahahahahahahahahahahahahahahahaha!!!!!-vorox4
Top

I get the strong impression the old streams aren't going away, they're just not on a regular schedule any more. Think of how often we get bonus streams lately when someone has time and feels like playing a particular game; I don't really expect that to stop in the new schedule. Especially as there will be several time slots currently in use that the new schedule doesn't seem to fill.
I stream video games every friday at 19:00 GMT, at http://www.twitch.tv/magistermystax
Top

I totally understand cutting some of the personal streams, and I'm fully in favor of adding more fun streams, but I wish it wasn't just a sudden smash-cut to a bunch of experiments. I'm also going to miss GPLP a lot.

Excited to see how you go about the non-gaming streams. Ian's building-stuff-corner (though still not called Horner's Corner) is going to be really interesting.
Top

In regards to the solo streams, there will definitely be some gaps in the new schedule that can be filled with extra solo/old style streams. How much of that we do will be dependent on how much time/energy we have left over from the new streams.

I can't speak for everyone, but I know that I, personally, hope to continue doing semi-regular extra streams.
Top

something's funky... Why does it say mobile on my desktop...? Why does the schedule extend right off my window and get revealed more or less when I change my window size? 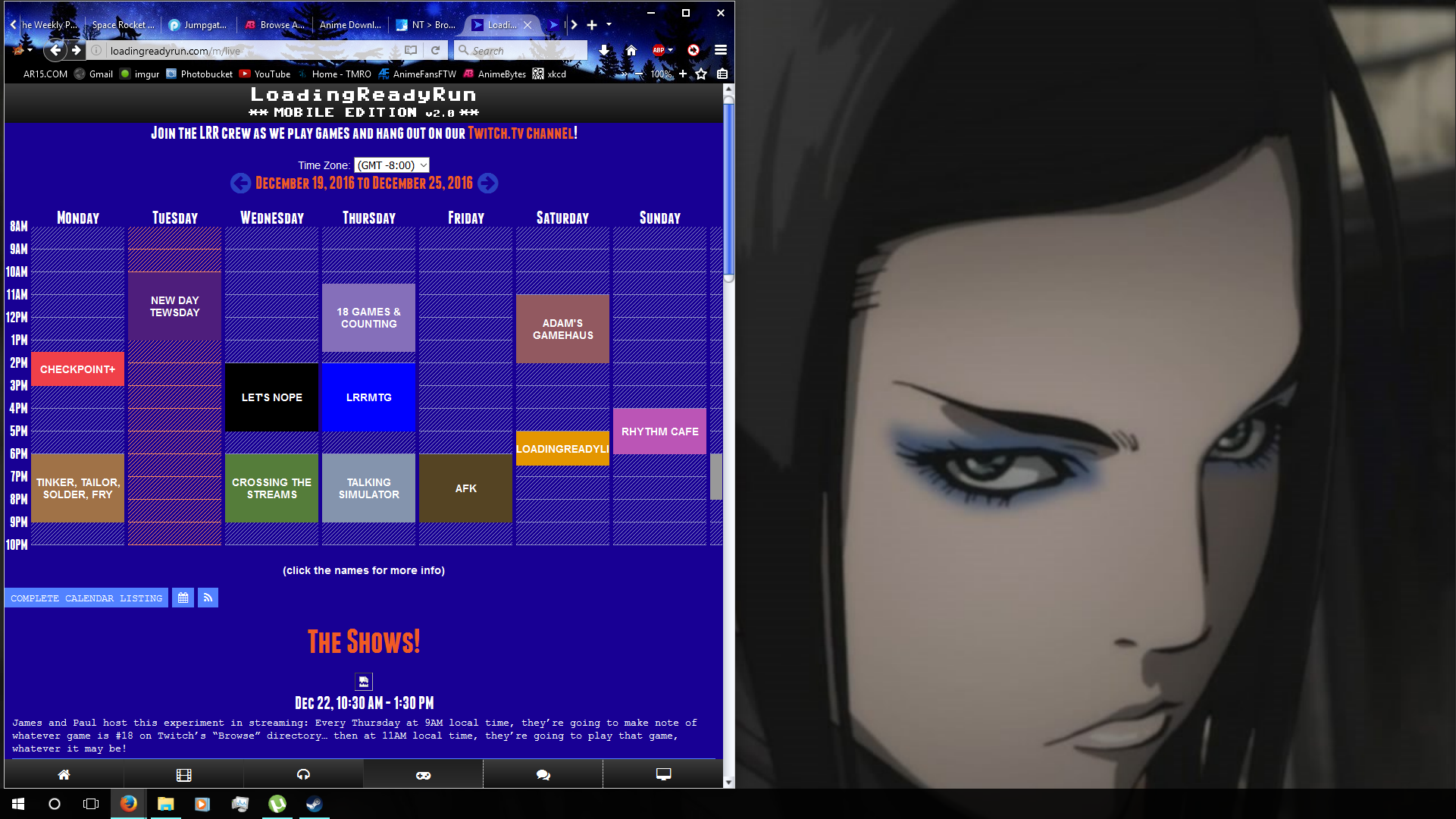 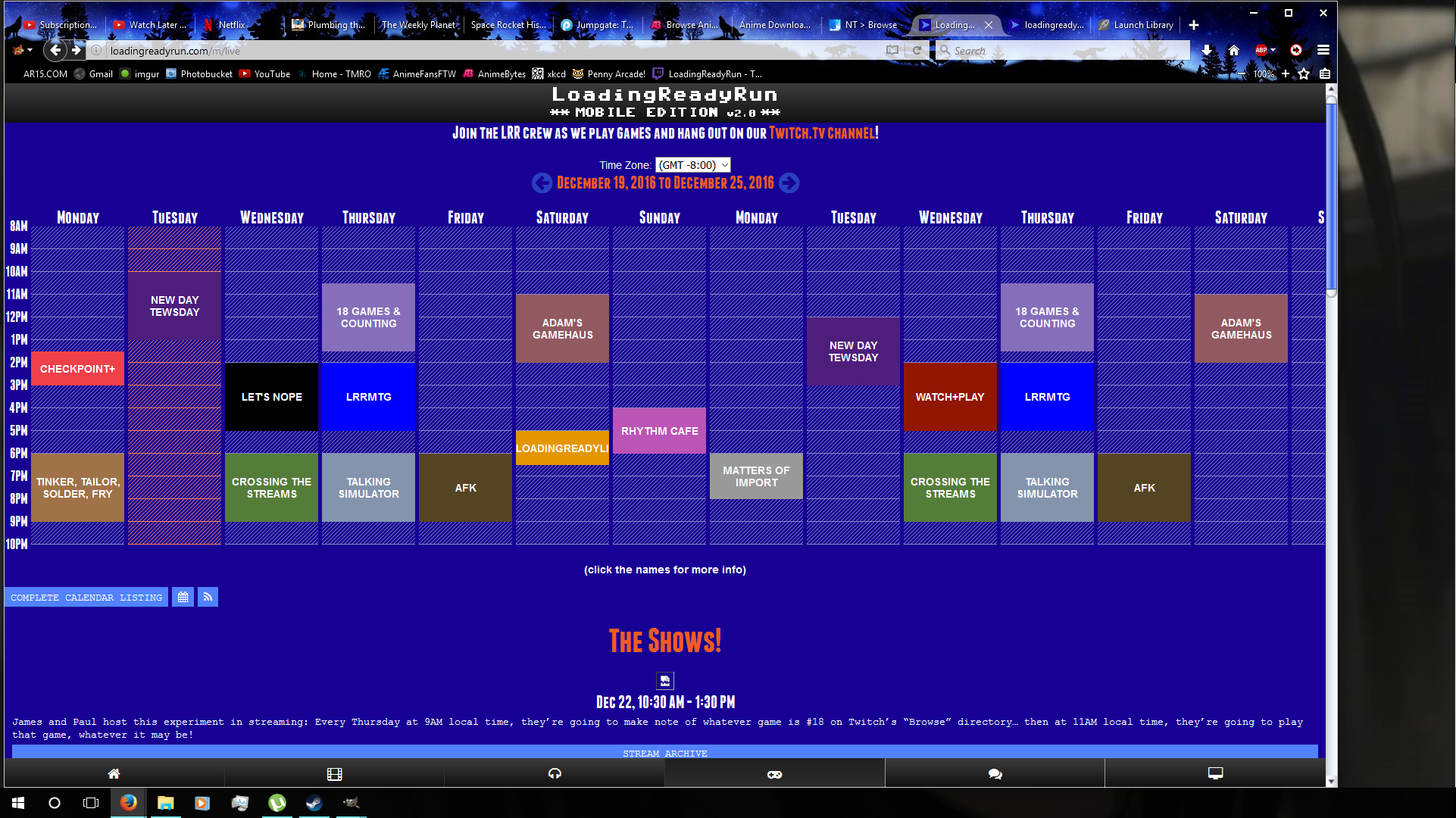 Because that url is http://loadingreadyrun.com/m/live - possible you bookmarked the link on your phone, and the bookmark transferred over? Or you followed a link in chat that was copypasted in by someone on their phone?

Anyways, you can click the desktop icon in the bottom right to go back to the normal version.

Also, for hiding large images, you can use the "collapse" tag instead of the "spoiler" tag.
While no one overhear you quickly tell me not cow cow.
but how about watch phone?
[he/him/his]
Top

thanks. Paul(I assume it was Paul) replied to my twitter question and I was able to switch back to the normal desktop version. I have no idea how it got switched to mobile. I had that page open in a tab and then one day it just switched.
Top
Post Reply
47 posts