Hmm, hello! i see that for some reason I've become the focus of some attention!

I'm building a town with two castles in the spot that I booked using the planning office, after talking to the mod (i forgot his name, sorry!) who was reworking the spawn area (he's been a bit inactive as of late).

i was then featured on James stream, which again no one asked me to stop, and have been building for six weeks-ish (or just before that stream).

if you want to ask about my build that's cool but you have to understand the walls are the canvas that i'm setting out first and then will come the town with the farmland and the tavern and the mines, in-between the two castles (i'm going for a bit of a dark souls look).

I have to ask, i'm i cutting into anyone's stuff? i know i'm close to vithal and stargirl is just across the way from me but I've had a look around and not seen anyone.

I mostly finished my builds around Southwest Village and moved south beyond ff4ede's bridge, so I have no problem with the walls.
Top

I haven't been getting as much time to play as I would like, so progress on the arena has been slower than I would like. If anyone would like to help out, deliveries of black, white, and both dark and light grey wool would be much appreciated!
Top

What about carpet? I think there's a few stacks over at Cameronville that you can have.
Top

I was planning on converting that wool into carpets, so yes, that would work quite well. Thank you. =)
Top

The pigmen grinder seems to have broken. I think the problem is the second level doesn't trigger any more and bounce the XP up. Since I don't know how to make it work, I haven't tried to fix it myself.
I stream video games every friday at 19:00 GMT, at http://www.twitch.tv/magistermystax
Top

Atifexe wrote:I was planning on converting that wool into carpets, so yes, that would work quite well. Thank you. =)

Excellent, thank you. I'll try to put some time in tonight; hopefully the progress will be visible on the dynmap.
Top

Is the server down?
I stream video games every friday at 19:00 GMT, at http://www.twitch.tv/magistermystax
Top

Yeah not even http://lrrmap.rebellious.uno/ is responding so i guess the server is down for a while.
Top

Time to get more work done on LRRcraft then.

I miss the server

went to wales and now i come back and it's down, such a craving to build more!
Top

Server is back up and running!
Top

SquareDotCube: May I have space for a store in the underground market?

Was there a server rollback or something? Because my villagers are missing.
A.K.A. Likal in some places.

The was a server reset. I lost the leads I was using to keep my horses tied up.

And no, I'm not rebuilding the Hall of Chests again. I wash my hands of that disrespect.
A.K.A. Likal in some places.

Is this recent or part of the long running redevelopment of spawn?

Spawn is getting to be a real public works project - a long period of time has passed and no real progress appears to have been made.

I've been snoozing a bit on the game, so I thought I'd give a heads up on stuff I've done...

In short, minor updates on the Lusian Trail. Just added a support pillar to the corner of the West path, just to add a touch of realism (so it's no longer appears to be floating). Adding a little flair at the intersection near Little Arcadium (bit of a gazebo-pagoda vibe, just to spice things up) & finally added a little rest stop & maintenance shelter between Little Arcadium & Rogue's place for travelers.

Construction of my permanent home is going slowly, as I have to wait for the cobble to smelt (lacking iron to build an Auto Furnace. The Iron / Ore I currently have is being held for the charcoal generator... which I could utilize as an Auto Furnace, but prefer to avoid it).

If you're watching the area near Little Arcadium, you've probable notice a wooden platform underway. I will admit that I'm running with a tree-top village motif (which is certain going to please the druids on the servers //end sarcasm) & will be sprawling around the area (expect a maze-like structure). Right now, I'll be using the Lusian Trail as the southern & western boundaries with the one river inlet as my northern boundary... assuming I can get creative enough to build up the hill / mountain.

I will get around amend my land claim to accommodate the development, but if anybody has any spare oak logs that you need to unload, feel free to drop them off in the public storage hut in Little Arcadium. If you're using the nether portal, you'll need to travel through the tower (which the mines, lower level & upper level are accessible).

Other logs will be be accepted for potential expansion as other "districts" (separated by the type of wood used), but may require other players assistance in such expansions (if anybody is interested). Any developments over the Lusian Trail must keep a 5m gap from the road to minimize conflicts.
~TStodden
(Going Text based as Photobucket is being a jerk)
Top

So I was on the server yesterday, digging my rail tunnel, and Myshpoetry asked if anyone wanted to help layout a trading post style build. A few questions back and forth, and a quick site visit, and I went away to put together an idea for a layout that will hopefully fit in the the design aesthetic of the rest of Myshpoetry's building. So three views available. The first is the basic elevation of a single stall design.

If you've seen pictures of the floor of the NYSE (at least in the old configuration) you'll probably recognize the general shape of the individual trade stall. The idea with this design is to coral the tradesman (villagers) inside the stalls, and allow some window space to facilitate trading. I wanted to limit the potential for meandering traders wandering off, but allow players to access sellers easily. Another design that I could only describe as "pulpit based" also came to mind, but it's really a scaling reduction to the open stall space to further restrict the trader's movement, so I figured I'd show this one for first comment. Next view is the individual stall layered build-up. 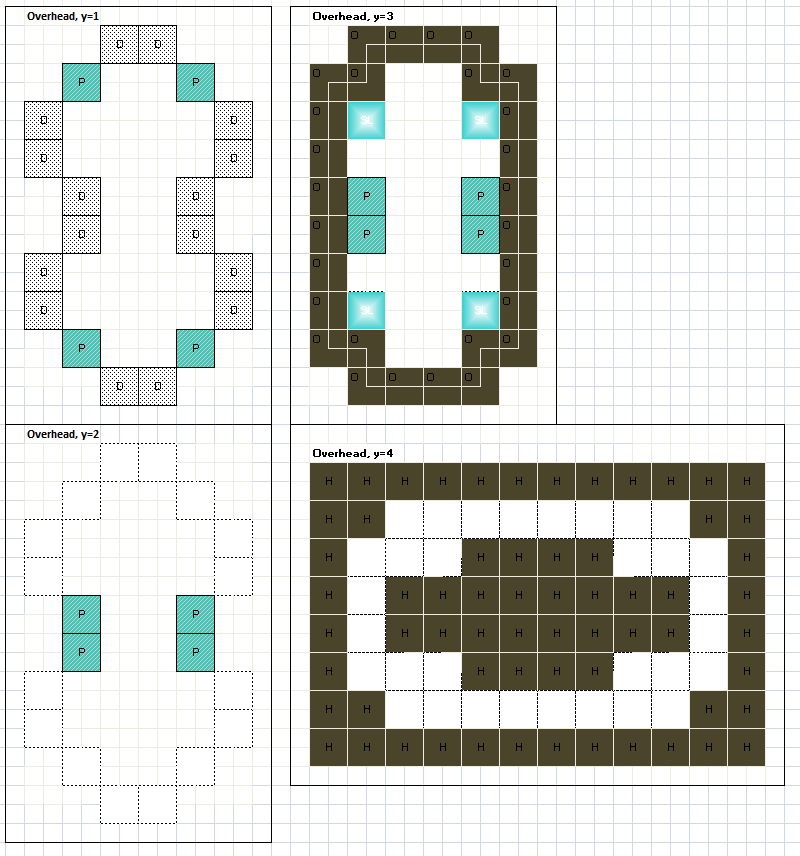 The idea hear is to create the U shaped trading pods with a curb block (y=1) and open space through which to trade (y=2). The stepped blocks and lighting at y=3 should hopefully maintain visibility across the area while providing a crown molding effect into the half slab ceiling in the at y=4 level. The lower half design prevents mobs from spawning on the roof without lighting the world, but the idea to use sea lanterns as lighting without capping the light panels will let the lighting design show through. 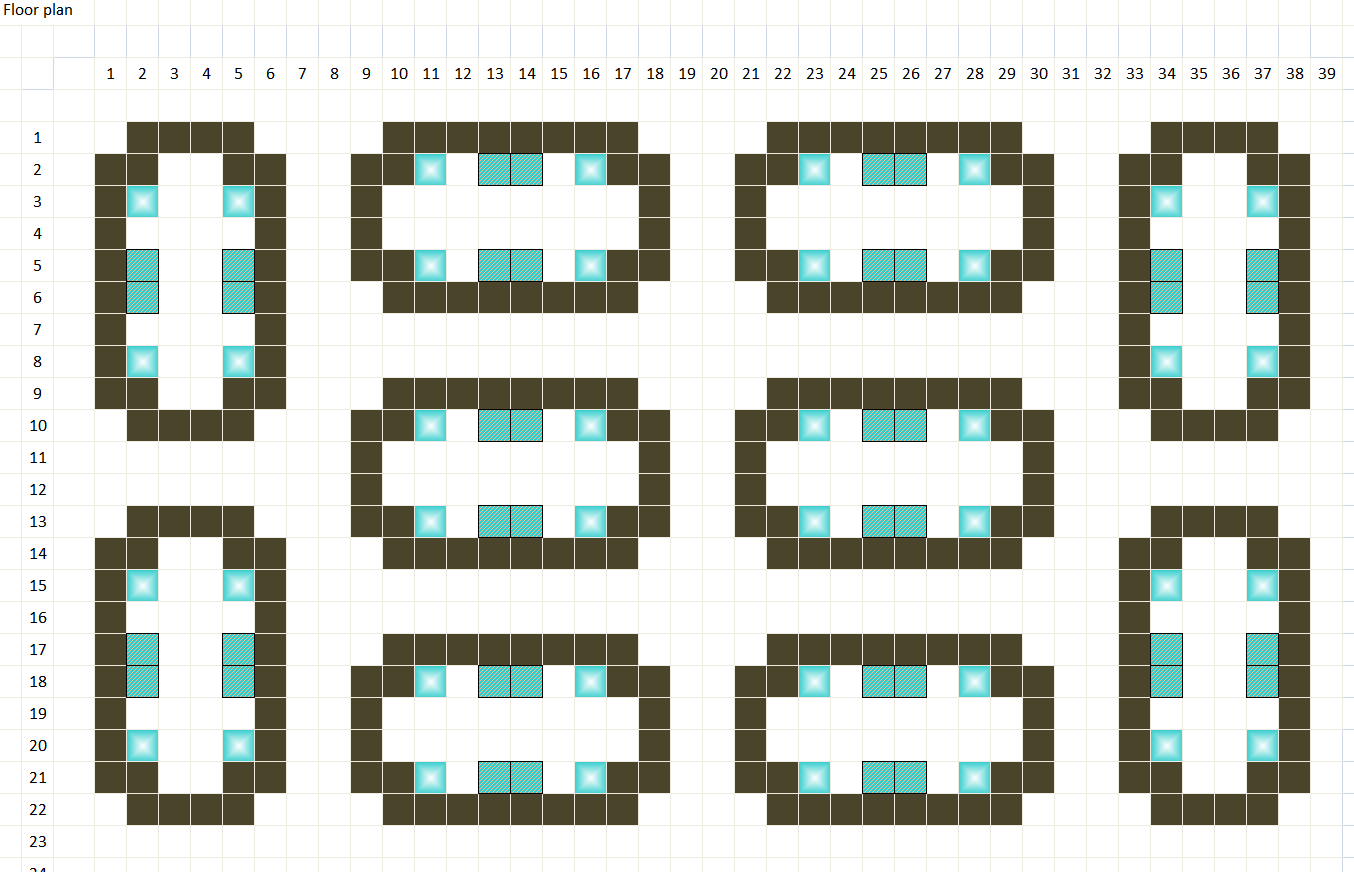 Last display is the overall space floor plan (without the ceiling layer). The goal here is to have a minimum of 2 block wide walkways between the stalls to maintain player mobility. I'm trying to think of a clever way of further limiting the trader-wander distance by shrinking the stalls, but I'm open to any suggestions from folks who know more about the villager AI than I do.

The other thing included in the primary unit elevation is the material needs calculated from the layout. I've tried to match materials and appearance to Myshpoetry's existing construction, but the design is scalable, and block types can easily swap in or out. So, Myshpoetry, thoughts? Anyone else have suggestions?
building on Uno's Minecraft server as ff4ede (pronounced as an exaggerated version of forty).
Top

Alright, when I get some time, I'm going to start on building "Paul Sandbar" somewhere in the neighborhood of -700, -220 down to -700, -120. I'm going to build it as "hollow" so it'll be sand outside and a sandstone inside area to walk around and do stuff in.

I am doing some work to improve the village at -3950, 1720, which I have dubbed Thimbletrimmer. I have built a stone wall around the village and built a Nether gate. I want build more houses and rebuilt the wall but feel free to add to this village if you want. I am planning on building a road south from my castle to the village at some point.

I'm working on getting the library essentials finished. The first floor is almost done as I am re-designing the enchantment tables + bookcases portions. I didn't realize you needed only 15 bookcases, but I plan to reduce that number to 13 by getting rid of the lower-level enchants. Any suggestions on how to reduce that total to a lower number (certain bookcase quantities that don't make a difference, for instance) would be appreciated.

EDIT: Library is pretty much finished, not really sure how to finalize the top though. It's functional however, and that's the part that matters.
Top

squaredotcube wrote:I'm working on getting the library essentials finished. The first floor is almost done as I am re-designing the enchantment tables + bookcases portions. I didn't realize you needed only 15 bookcases, but I plan to reduce that number to 13 by getting rid of the lower-level enchants. Any suggestions on how to reduce that total to a lower number (certain bookcase quantities that don't make a difference, for instance) would be appreciated.

EDIT: Library is pretty much finished, not really sure how to finalize the top though. It's functional however, and that's the part that matters.

Not quite. You need to pull out the carpet, as it blocks the Bookshelf/Table connection. Can't have ANYTHING in those spaces, even transparent non-blocks.
A.K.A. Likal in some places.

Also I've build two exterior design examples out over for the post office, and my idea is to use both. One is the "original" brick and stone design which is the main part of the building while a smaller part is an "expansion" that uses chiseled sandstone and brown stained clay. Building the post office is open to anyone really - I just made those two examples as a recommendation.
Top
Post Reply
6508 posts