Apologies to anyone actually using it, but there's a big hole in the Spawn Town Circular Way - a big chunk has just disappeared near the Spawn Town harbour.
Top

Another victim to the reset, I'm afraid.

On a side note: Ever get an itching to build something and all of a sudden you're making a sewer underneath Spawntown?

Yeah... That's what's going on now. At least it's something you can explore once it's finished.
Top

Ooo - Is the plugin that keeps monsters out if spawn flexible enough to allow mobs from spawners in the spawn sewers?
Top

What'd be great is if we could create biomes and spawn zones for slimes to appear in there. They'd be at home in the sewers.
Top

Just a heads up - I'm going to need a mod with worldguard/worldedit experience soon for a secret project within the next week or so. Right now I'm doing a lot of hollowing out and ore collecting...
Top

/home command is sending me to Spawn for some reason instead of my old home point.

Additionally /sethome isn't work either (unless I have the command wrong)... saying I don't have the right permissions.
~TStodden
(Going Text based as Photobucket is being a jerk)
Top

What happens if you die, do you get sent to spawn? It could be your bed was broken or is obstructed.
Top

I can teleport you to your house if need be.

On a side note, preparation for my project completed earlier than I thought, so a mod with WE & WG capabilities/experience is needed.
Top

When I try to use the /home command, it sends me to SpawnTown instead. Beds have been replaced & are NOT obstructed (as my original point I set was untouched). Thankfully, some of the projects done (The Lusian Trail & the Nether Portal) have provided relatively easy, albeit slower, paths back home. As long as I have a map (like dynmap) to assist & relatively safe path to travel (even if it's a long one), I'll be OK.

As for personal projects, the "Treetop Village" section of Little Arcadium is slowly being developed as I'm trying to figure out how to "naturally" (as it minimizing hanging structures) build from tree to tree that creates the labyrinthine framework (which will likely piss off the druids on he server... I've seen the signs). Once I have the good amount of the framework in, I'll get some buildings put in. Needless to state that the "sprawl" has begun.

As for proposed LRR Public projects, I don't know how far you want each of them... but I was scouting a potential location for the following projects. I'm staking any claims at this time, but throwing out some places to build here.

* Beej's Dairy around -1750, -300 -- Plains area, seems suitable for a farm & likely have a high probability of cows & other livestock wandering around. This is the one that I'll likely stake a claim on as it's fairly close to my place.

* EnDery Heating around -1875, -360 -- Granted this is near the proposed location of Beej's Dairy, it seems fitting that they should be relatively close to each other & the proposed site has some free flowing lava to aid in the "heating" theme... unless building this in the Nether Realm is more appropriate.

Depending on how "creative" we're permitted to be, I'm tempted to build a lava tube (surrounded by 2 blocks of glass or stone with glass panels) going to the Dairy to serve as a heating project (gotta advertise somehow).

* Adam's 24-Hour Fishing Stream (Site Alpha) around -2050, 600 -- An island to the south of JamesTown seems fitting. The east side of the island is the off-fork of the water that seems reasonable for a fishing stream. There is some pixel art on the west part of the island, but that can remain untouched.

* Adam's OTHER 24-Hour Fishing Stream (Site Beta) around -2800, 550 -- A bit west from JamesTown, a couple of coves on this peninsula still has relaxing atmosphere to accommodate prolonged fishing (although it's not an official "stream" by geographical definitions).


* Adam's ALTERNATIVE 24-Hour Fishing Stream (Site Gamma) around -2325, -625 -- A bit away from all other MARKED developments (existing or proposed, there seems to be an unmarked development around 600m from the proposed site), It's a savanna area that has a viable stream to work with.


If somebody else believes there's a better spot, feel free to propose them OR claim the project officially.
~TStodden
(Going Text based as Photobucket is being a jerk)
Top

just fyi, my NPP isn't abandoned, just last months in japan so my focus hasn't been on minecraft

Hello all, once upon a time I was on the LRR Craft server, but then went away for a few months. Any mods around able to authorize me on the new server? Thanks!
Top

Just finished the prototype of another big secret thing I'm building... I require *ALL* the redstone, and a whole bunch of dirt and gravel

I have redstone dust in the thousands I think at my store, if you need it.
Top

The Transportarium renovations are now mostly done. All that's left is part of a tunnel on the North-South line and the entrance from Spawntown/spawn, which I've yet to plan that building and how to connect it.

Are you bussing kidding me. The server's reverted chunks in Spawntown back to ones from months ago again, destroying parts of the renovated Transportarium, the new library, the sewers-in-progress, and a secret project I was working on.

...I'm not working any further until these chunk shenanigans gets sorted out, preferably with the affected chunks turned back into what was present as of 1AM EST today before I went to bed.
Top 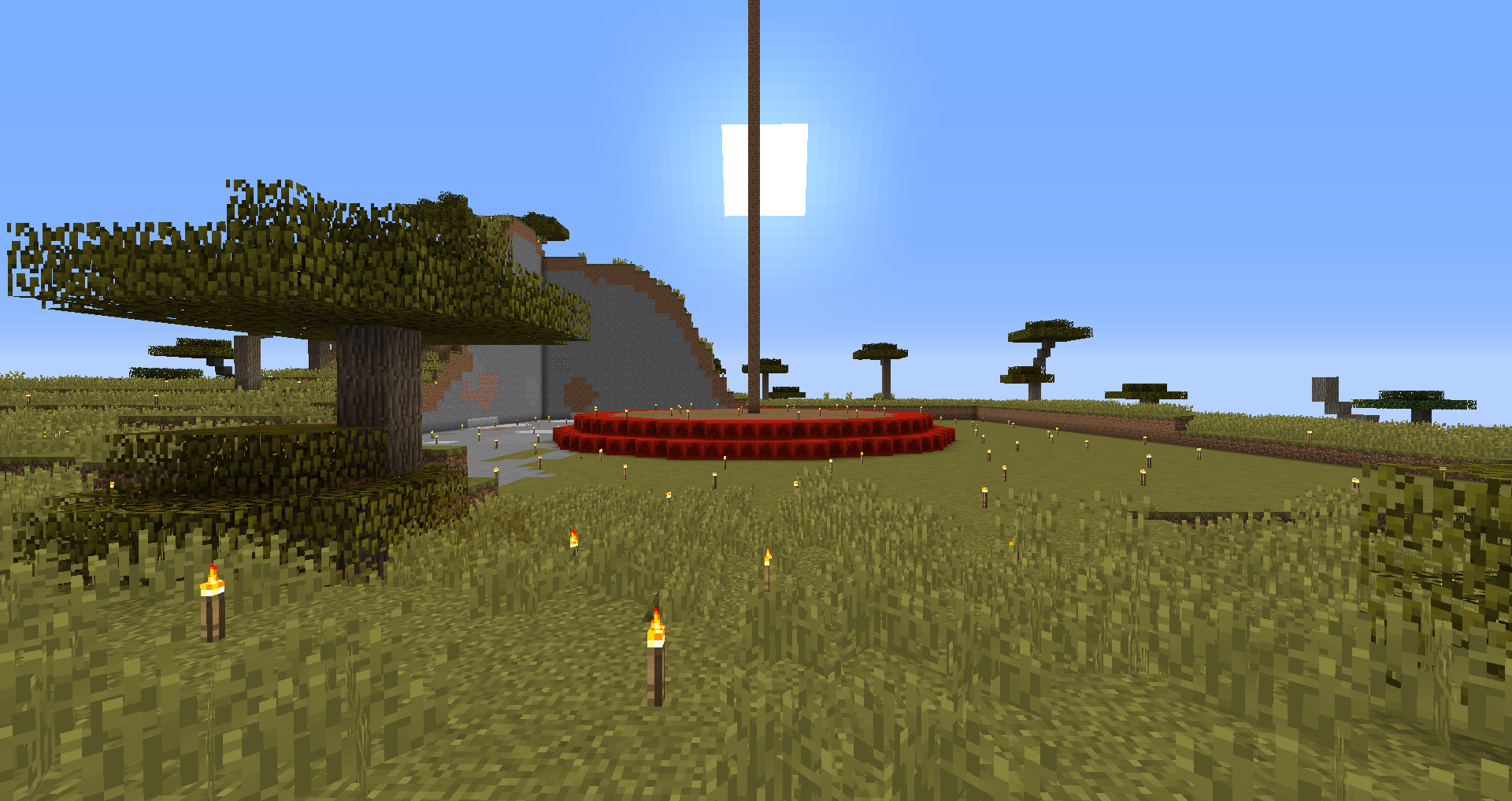 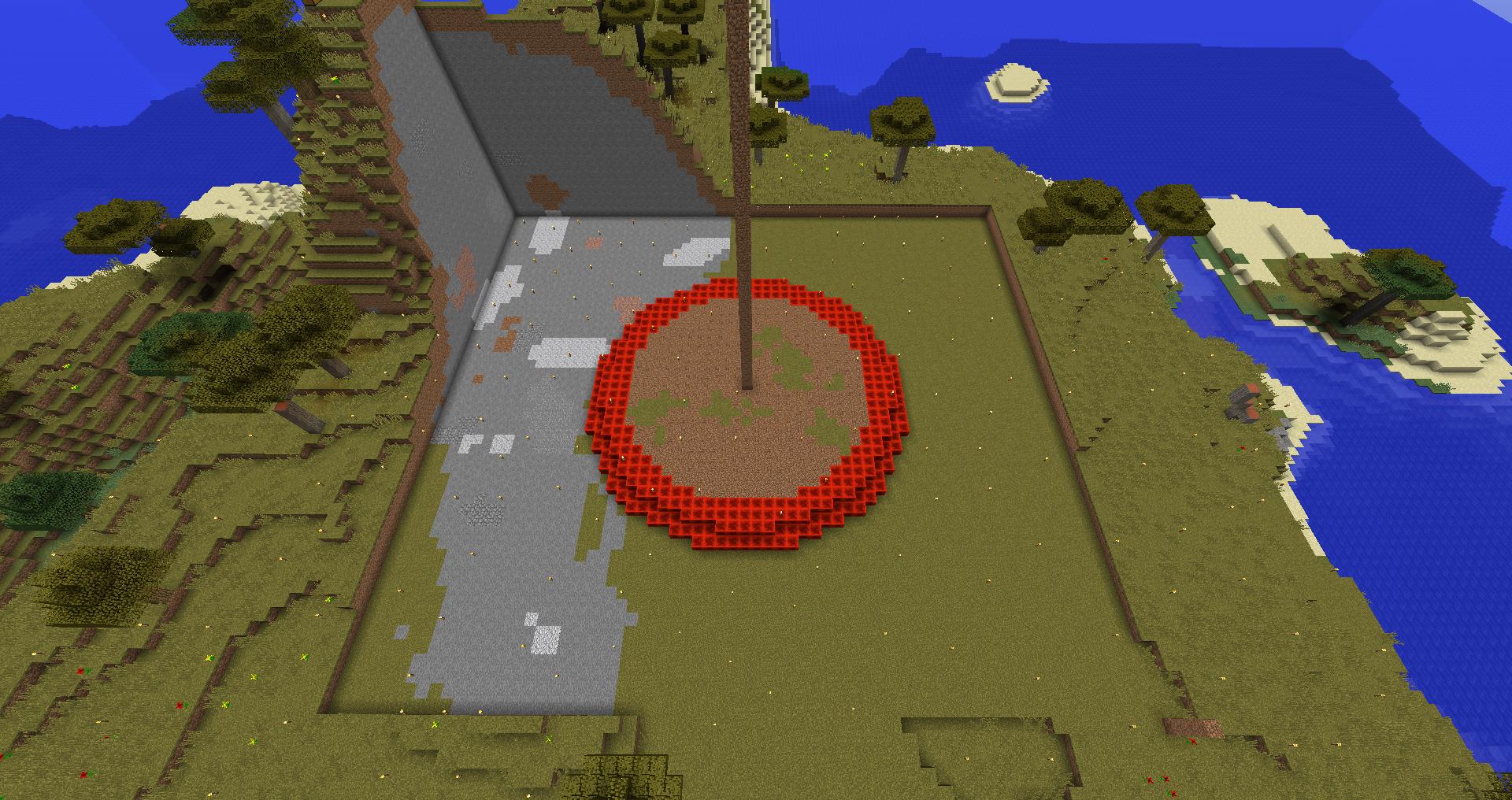 And a bonus look at my poorly placed "foreman's office" 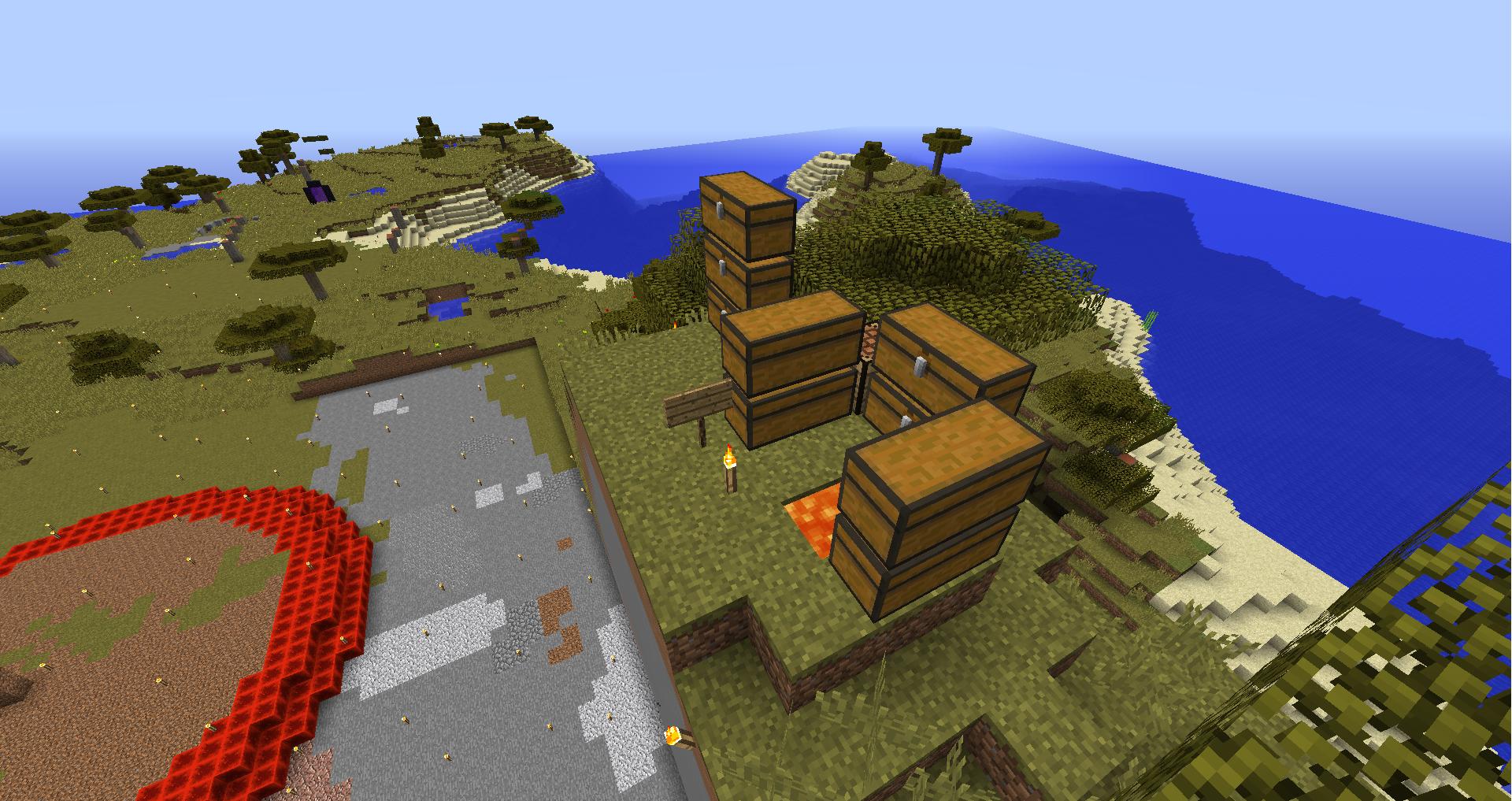 Most of those chests are *FULL* of either dirt or cobble from the mountain which used to be here. The one closest to camera on the bottom? My entire supply of redstone, tools, and a few stacks of coal I dug up while de-mountaining.

This could take a while... and I wasn't exactly exaggerating when I said "*ALL* the redstone". And that's just for the shell. There's internal stuff too... mostly glowstone, but I can cross and subsequently burn that bridge some other time.

Is there any chance we can get some mods on this server? There are many ways we could make our lives easier.
Top

Just checking in. Not dead, but am socially dead atm. PhD stuff (year 2 review on Thursday) so off radar until August most likely.

ATTN Road Construction Crew: I built a tunnel on the west part of my place that can be used as part of a road that can go out towards Mt. LRRMore, Fort Richard Butt, and Valkyria (and I guess whoever owns this place)

Feel free to build a road out there.
Top 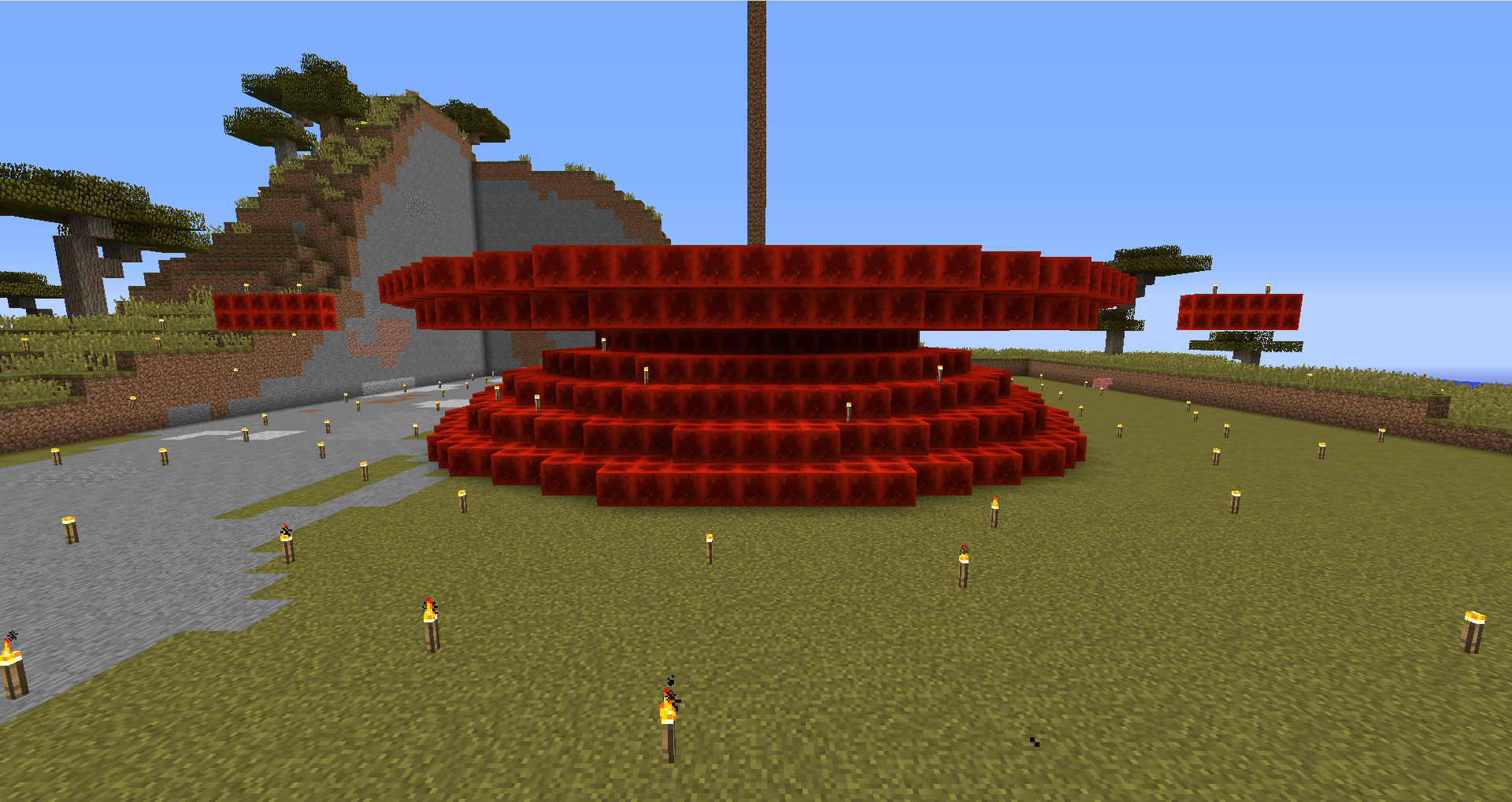 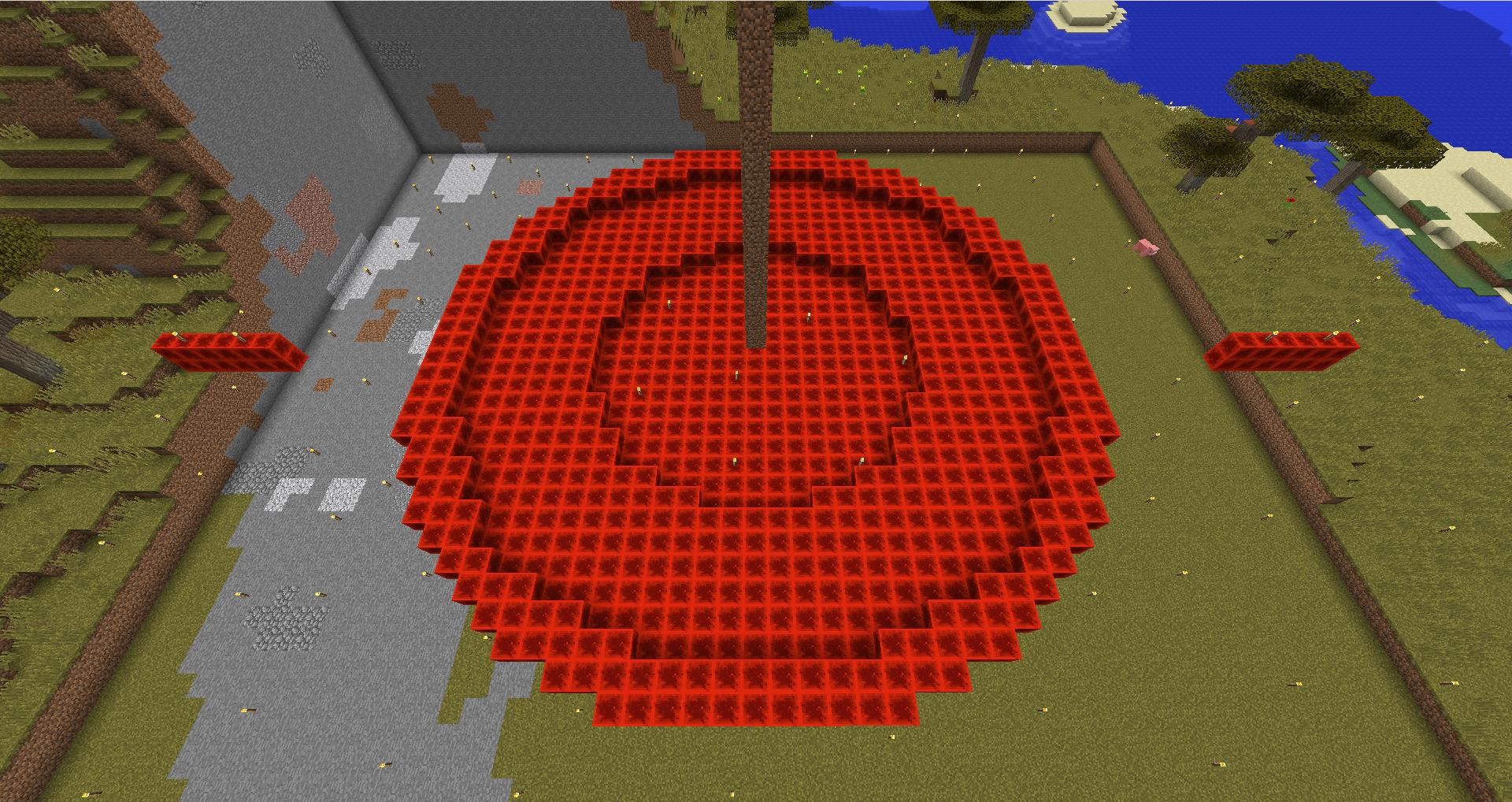 It's still early going, but the basic structure is starting to take shape.

Bonus: a chilling reminder of things left to do (but an awesome sunset backing) 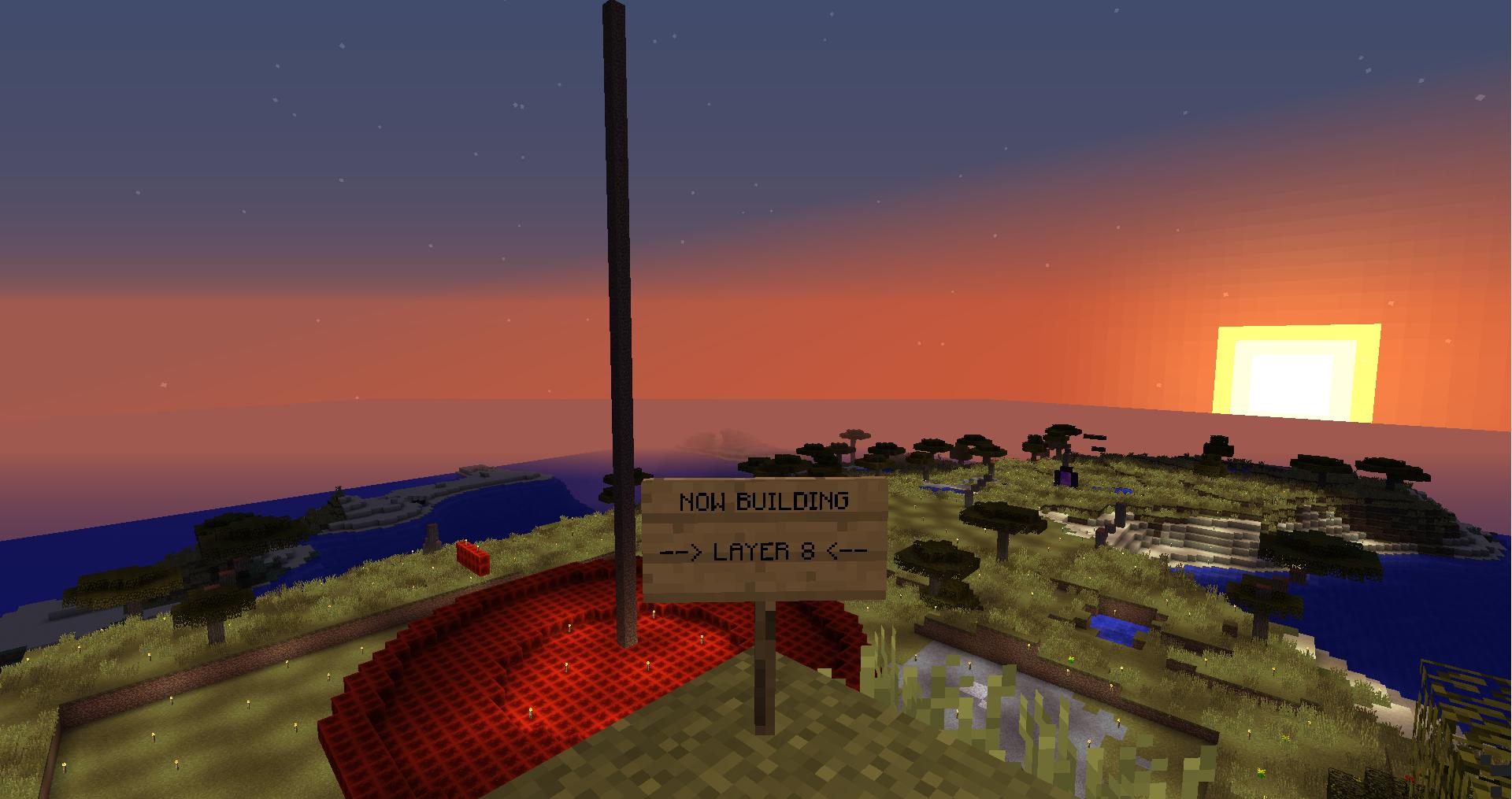 The /home bug seems to be fixed (now going back to my old spot now), I'll be looking at updating that to my new place. UPDATE: Back to derping me to SpawnTown... was working for a moment, though to my old home spot though.

I'm also building the road to the proposed place where Beej's Dery Farm (hereby known as "Project Dery") is underway (to -1725, -325... Path to be named "Dery Way". Muffin Man unavailable for comment). The plains is a reasonable place for the farm, so I'm going get the base stuff in.
~TStodden
(Going Text based as Photobucket is being a jerk)
Top

I haven't been around much lately. Working was greedily taking all my time, but not so anymore.

Hopefully now I can finally finish the Herbert Hole. If anybody wants any lava feel free to scoop some up from the bottom of the hole.

Also I have some redstone if you want it, Omega Lairon.

Hi everybody, I didn't think about this before I logged onto the server but could I be authorized to do things on the server? Minecraft name is UnluckyDesperado.
Unlucky Desperado Youtube
Twitter
Top

Has the server died?
Top

Thanks for the offer, but at this point I recommend you hold onto it for yourself.

Having built most of the base, and simultaneously making "a bit of" and "absolutely no" progress really drives home the stark reality that the required amount of redstone bricks lays somewhere between "ludicrous" and "I can't even count that high".

So I've made a kinda disappointing executive decision to basically cheat - adding whatever I need into my inventory, *trying* to keep a running tab of materials used, and then obtaining the back balance through honest means before promptly deleting it.

If nothing else though, I'm at least going to still actually build the damn thing entirely in survival mode, because dammit, *something* about this project has to have some semblance of moral integrity.

Dntspard wrote:Hi everybody, I didn't think about this before I logged onto the server but could I be authorized to do things on the server? Minecraft name is UnluckyDesperado.

Sure, once the server apparently stops being dead