Talk about what you are playing now or join in with one of our forum games.
Post Reply
63 posts

I can't say I like the direction this series has taken. I loved SR2 so damn much, but I don't even recognize this series anymore.

As someone who's first intro to the franchise was Saints Row: the Third, though, I'm so ready for this. I LOVED SR3, and this looks AMAZING.
Do a Pivot Table!

Even having only played Saints Row III before (no Playstation), that seems...out there.

SR2 was fun, albeit with shonky controls on the PC. SR3 was hilarious, I'm thinking SR4 might be the shark jumper, though knowing SR that will probably be a mission somewhere...
Keab42: Keeb-forty-two Deal with it. @Keab42 | | +Keab42 | | Tumblr
Top

Keab42 wrote:SR2 was fun, albeit with shonky controls on the PC. SR3 was hilarious, I'm thinking SR4 might be the shark jumper, though knowing SR that will probably be a mission somewhere...

I... I might be disapointed if this isn't a mission, now...
Do a Pivot Table!

The PC version of SR2 was crap, the console version was better. I'd be fine with this if they transitioned from the Saints Row franchise into a new one. I miss my not entirely serious open world crime game. This is just too much.

I started with the second one, (still haven't actually finished the third) and I have to agree. The parody of the former was, to me at least, a lot more fun than the absurdity of the latter.
"Jamfalcon's a super weird name" - Graham

I've only played the third. This year. And I finished it all. I loved it. And looking at this trailer, I think I'm going to love this game! I like a game that doesn't take itself too seriously while being a parody even of ITSELF!

It's basically the Evil Dead of videogames.

Evil Dead and Saints Row 1 were mostly serious attempts at the genre.
Evil Dead 2 and Saints Row 2 were comedic interpretations of the genre that played mostly for laughs while still holding true to the genre as a whole.
Army of Darkness and Saints Row: The Third ditched the original naming scheme in some way, moved to being a parody of the genre more than an honest attempt at it, and were fun, but not quite "there" in a way the second was.

So, what would Army of Darkness 2 have been like, I wonder?

Saints Row 4, from all appearances, is summed up by the phrase, "Because I'm the motherfucking president, bitch!"

That's far truer to the Saints Row 2 ethos than the third was. We'll need to see if first appearances are correct, but I'm hopeful based on that.

And bonus points, just for you, fans of The Onion, I wanna let you know that the entire first chapter of Pride And Prejudice is on a radio station. So they will have an embracement of culture. They will get more fucking Jane Austen than any other M-Rated game they could possibly buy.

Like a lot of people taking part in this discussion, I've only played SR3rd and to me, Volition did exactly what needed to be done when Rockstar North shovelled out the glum-fest that was GTA IV. (I have yet to FINISH that game, and I don't think I ever will.)

SR3 was FUN; it was sufficiently absurd to take the sting out of the blatant sociopathy of the gameplay.

I'll admit, when I heard the first news about Saint's Row IV, I was skeptical as to whether this one has "gone full retard" as Lincoln Osiris would say.

And don't forget that Volition is under new management - we have yet to see what difference a Deep Siver-produced SR game will be from a THQ-produced one.

...but a few days ago, I saw this same trailer on Steam.

Yeah. I'll give it a chance. Probably not until it goes on some drastic sale, maybe a year or two after its release, but still...

I enjoyed SR2 quite a bit. Driving was a bit difficult on the PC, but I still enjoyed my experience with it. SR3 blew me a way in terms of gameplay, absurdity and dialogue. However, I felt the overall story wasn't as good as it was in SR2. It was very linear, which I didn't like. However, it did make for an EPIC final mission.

I feel they need to define themselves and the type of game they want to make and stick to that. I've enjoyed the series so far and I'm sure I will continue to do so, but I just wish they would settle on what they want to do.

From my understanding, this was originally going to be DLC/an Expansion for SR3, that took place in a Matrix kind of virtual world. It was cancelled and retooled and beefed up to become a full-fledged sequel.

I'm definitely interested in it. I don't mind how much it has changed, but it is really crazy considering the evolution it has undergone over time. 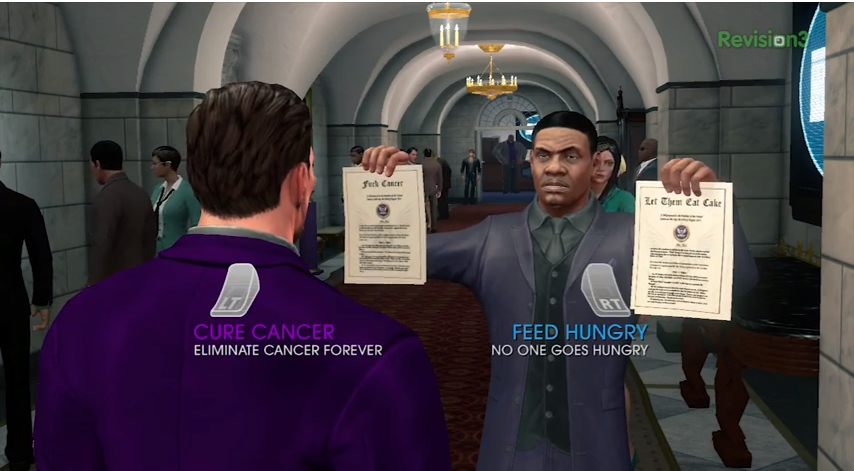 Think my opinion of this game might be changing.

I love the name of the bills. It's the little things, you know?
Do a Pivot Table!

They are masters of absurdity.

I played SR2 four years ago. I was extremely surprised when I played it. I mean, that Carlos scene. Oh, and Johnny's revenge. Man.

When SR3 started showing itself off, I was surprised by the direction, but not put off. It looked AWESOME! They even fixed, like, all of my gameplay complaints. Especially that driving. Man, SR2 sucked at that.

Anyway, while I was kinda disappointed that SR3 didn't have, like, any serious tones at all, I wasn't put off. The tone shift was fine for me. SR4 may seem like a bit much, but the trailer with Keith David in it sold me. Not BECAUSE of Keith David, but that whole trailer just reassured me that it's not just "go around, punch things with your dubstep gun". There is still SOME kind of story, and that's all I really needed.
Top

You better be able to ask people what they know about the reapers. S'all I'm saying.
http://youtu.be/gzV8Q2fsN0o?t=2m48s

That's a well-crafted trailer. It makes me want to reach inside the screen and cuddle the video -- just give it a long warm hug. And this is just a Side-quest?

Is the static thing at the beginning a joke off of the Man of Steel trailer?
Top

At this point, they should really just call it a new IP.
H̼̮̖͓̻ͮ̀ͬ̓e̟̦͉̾̔̀ͣ͆̄ ͚̤̈̉ͦ̎ͭ̚c̰̠͚̜̹ͪ̐̎̃ͅo̗͌͛ͥ͑m̍ͬͥ̚e͍̱̲̤͚̹͔͛s͚̱̤͚̲̭̗̃̎ͭ̚.̘̫̖̮̠͒̔.̝̹̟̳͚̂̆̋͌̐̚.̬͓̰̃̑
Top

I mean, I'm pretty sure it's knowingly dumb, but that's hilarious anyway.
Top

I think its important for games to be different. I would think more people would understand that as well, but I'm never surprised by people's idiocy.

Saints Row IV gains the honor of being the first AAA game refused classification in Australia since the R18+ rating comes in.
Top

It's really got to be hard to be a gamer in Australia, Jack Slack. You guy's have my sympathy.
Do a Pivot Table!

I will never ever understand it. Here's hoping they'll eventually see some reason!

The cynic in me believes they're getting great kickbacks from the black market sale of 'refused games'.