by Jostain
So...
During the holidays I started a small project to learn developing for android and mobile phones in general.
I went trough a bunch of prototype games that turned out to have a too large of a scope for a single developer.
I have now arrived at a game that I may have a chance of making playable within a reasonable amount of time. This game is Currently called SpellCasters (look! names are hard).
It is a location based game where you play as a wizard competing with other wizards. You fight other wizards by casting spells from your spell book. You get more powerful by learning new spells. all spells are cast simultaneously so there are no round and each spell has a mana cost and a casting time. a weak spell could have a casting time of 60 seconds and a powerful spell could have a 5 minutes.

The reason I am posting about this is that I want there to be a very large amount of spells to choose from with nice flavors and different effects.

So this is more or less a "What is your favorite spell" thread so that I can get some ideas for mechanics that I could include in the architecture of the spell system.

All feedback is appreciated and if anyone is interested in some beta testing further down the line that would be cool too.

I'll add some screenshots of the app later if the thread gets going.

Magic Missile:
"Projectile of pure magic that always hit its target unless blocked. Low damage and low mana with a short casting time"

Stone skin:
adds moderate armor(secondary health meter) to the wizard but adds slowness to the next spell cast due to the sudden loss of agility. Next spell has 50% extra casting time.

Blood Barrier:
Uses blood magic to create a force field around the wizard. The wizard loses health but the next spell the wizard is hit by explodes the shield and the spell has no effect.

The spells do not have to be balanced at all at this point. its just to get common mechanics into the game.

by Merrymaker_Mortalis
I've always liked fire and lightning spell effects. And I have always longed for a viable way to focus on these two "elements".

Lightning and Ice (storm) & Fire and Ice always seem to be paired up.
-
In the context of this game, perhaps a spell of:

Strikes the target with a bolt of energy from the heavens. The target is left suffering from burning damage for a duration afterward.

Some people also like to use magic as a way to set things up. Perhaps a thing could be changing the polarity of the target to be positive or negative. If two targets with opposite polarities ever meet, physics happen.

by Aeralis
Oh hey, I remember seeing something about this game a while back. It looked really neat!

Anyway, the first two spells that immediately jump to mind are both from Diablo. The first is Teleport, which of course isn't actually implementable, but the second is Chain Lightning. I always get excited to just fill a room with electricity.

Outside of that, my favorite kind of spells are the ones that let me just kinda screw around with my opponent. Using Pathfinder as an example pool, things like Mirror Image (create multiple illusion copies of yourself) Forbid Action (force target to not do a certain action) and Beguiling Gift (target immediately consumes/uses any offered item) are tons of fun. To turn that into something actually useful, I guess spells that let me "take control" of my opponent by retargeting their spells or locking out certain types of magic (like, hey, you can't use Enchantments anymore).

If we use MTG as a different example pool, I'm rather fond of anything Blue. Counterspells especially. So I'd definitely have a lot of fun with counterspells, dispel effects, reflective barriers...

[EDIT] Oh, hey, sudden burst of inspiration. Going back to Diablo, we have the Blizzard spell. Places an entire area under a constant ice barrage for a while. Seems kinda perfect for a location-based game, yeah? You could even tune it to different elements, like a meteor swarm for fire, an electrostatic field for lightning...

by unpronounceable
I'm a really big fan of Heroes of Might and Magic, so here are a few spells based on theirs, sans flavour text. I'm assuming all spells are meant to be used in a combat situation, and that there's no movement in combat.

Armageddon - Deals extreme damage to everyone (including the caster).

Dispel - Removes buffs/debuffs from the target.

Protection against [element] - self explanatory.

There's also a lot of inspiration you could get from the pokemon games.

Substitute - Reduces the caster's health to create a double that will take hits instead of the caster. Health of the double is equivalent to the health drained.

Toxic - Inflicts poison on an enemy that does more damage the longer they are poisoned.

Crunch - Inflicts damage, and has a chance to interrupt the target's spell.

This would be extra cool if it tied into the location tracking systems to generate an elemental based on your local climate or environment. Cloudy or rainy weather could generate wind, rain, or thunder elementals, playing in mountainous regions could give you rock elementals, ice elementals could be exclusive to winter months...

by Jostain
I like the heat idea. It can be implemented with a very minimal amount of counters. You can have one status counter that encompass hot/cold/wet where each frost damage attack bring you further along the cold axis and at certain points penalties are added.

for example after a number of frost attacks the wizard reaches 100 cold and gets a slowness effect and start take the cold effect as damage instead making spells with the cold stat a lot more dangerous.

In this the wet penalty would be weakness to electrical attacks but resistant to heat because the heat stat removes 2 wet points or add 1 heat point if the target is dry.

Its nice. It encourages the player to try sets of spells in order to force the opponent to use certain spells as counter. "ok Im freezing to death but the only spell i know that adds heat is fireball... I guess Im fireballing myself then?"

The elemental stuff would be initial "release".
The weather spells probably be static buffs or debuffs in the area rather than recurring things. recurring things needs counters...

I actually made some plans for a teleport spell but it wont work the way you think. It more like making the player unable to cast spells and unable to be targeted/seen until the player moves out of that area. The movement is not instant but the effect is that you can move from one place to another without being murdered by other wizards on the way. which is the more useful part of teleportation. Thats why suggestions that doesnt sound like they would work are really useful because the spirit of it might still work and the flavor of the spell is still there.

by Jostain
Im just going to continue updating the progress on the thing here. Its pretty much a dev diary to keep me going with it and actually finish it.

So this is the current "design" of it. 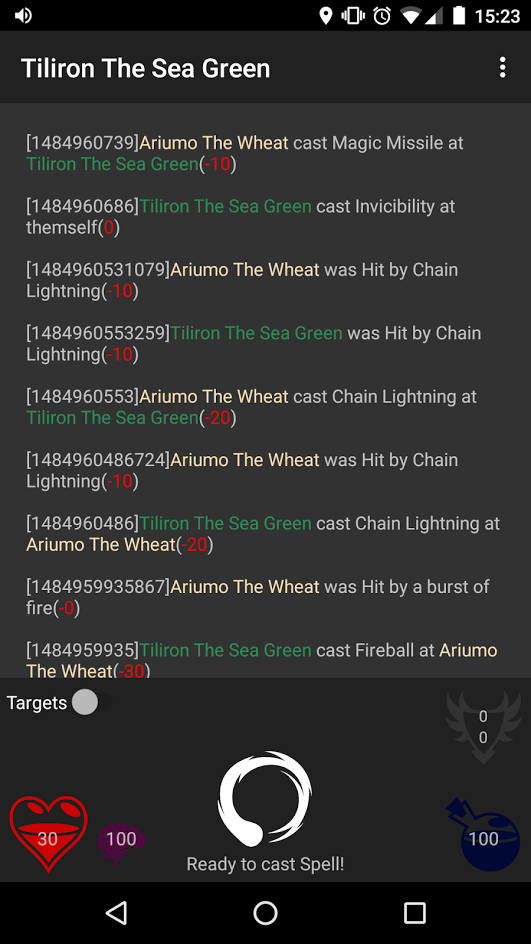 The text area is more or less designed to be the textprompt from rpgs and the bottom half is all the stats.
My design statement is basically that all information about the player should be able to fit comfotably inside that square or the systems need to change. Its more or less to prevent feature creep.

The names here are generated. the first time you open the app on a specific phone you get a generated name and a random color.

The "database" currently have about 100 different colors and some of them are stupid like wheat and some of them are funny (like sal the fuchsia wizard). The idea is that when you die you need to revive yourself in some way and then you get a new random color. It gives you an incentive to stay alive if you like your current color.

Most of the time since the last update has gone into reworking the position system because there were too many problems with edge cases in the current system of squares.

Instead i found a system that works really way with my current database and allows me to just get all the users within a certain radius of the user.
That radius is currently set to a pretty large area (roughly 6 km diameter).

I should probably proof read this but im not going to.

tl:dr
gps databases are hard and proceduraly generated names are fun and or stupid.
All times are UTC-08:00
Page 1 of 1
Powered by phpBB® Forum Software © phpBB Limited
https://www.phpbb.com/