Talk about what you are playing now or join in with one of our forum games.
Post Reply
10 posts • Page 1 of 1

I don't play but I went with the goal of capturing paint balls mid splatter.. It may not be a video game but it is a game.. and I was just really proud of how the pictures turned out especially the top two in my eyes 344 and 345(Tony Paint Splatterx2)...

http://flickr.com/photos/corvis29
This post is not real its just a figment of your imagination...

And now for something completely different!
Trailer Park Ninja
Top 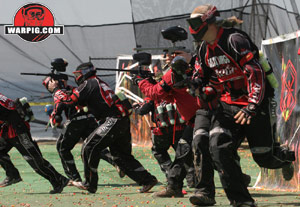 Airsoft it better IMO as in Airsoft we wear actual military uniforms and our weapons are basically the real thing with a different firing mechanism. And you don't need to wash your uniform after Airsofting.
Top

I've been paintballing twice, the second was on my 18th birthday.

The first time I was probably one of the better youngsters because I seemed to be the only person in general taking advantage of cover and adjusting for distance in my firing trajectories.

The second time I was shot twice in rapid succession at short range, in the nuts. I also heartily enjoyed spamming smoke grenades and probably gave half the attendants cancer because of it.

airsoft is better than paintballing, but too many people not taking thier hits can ruin it a bit
Thoughts From a Fish Bowl<------ my blog...

Airsoft and paintball are the same game, only airsoft has cheaper ammo. Every time I've played paintball it's in the woods wearing camo.

Both are terribly expensive and thus I don't play any more.
*
Top

I think Airsoft is cheaper on the low-end(I have one airsoft gun which set me back $15-20 at purchase and protective gear is basically something to keep the pellets out of my eyes and ears) than paintball, and due to the lower muzzle velocities involved, can be played in places you can't play Paintball in(such as inside of my house).

Never played Paintball. Haven't had much chance to play Airsoft, either. Clearly, I need to do some rethinking on the people I befriend.(far too many munchkinish DnD players, not nearly enough athletes)

though most sports are
1: team sports. I don't do team sports.
and/or
2: expensive. I can barely cover gas expenses for driving to and from work and school currently.

Oh, and there's the catch that everything I try to do, I find the majority of the people who already do it are better at it than me, better funded than me, AND like to berate me for being a casual, low-budget person.(which is why I tend to avoid team sports)
Top

Hmm...woodsball still rages on, but there's a new type of paintball now.

But most importantly!
Typical paintball field

As an avid paintball player, I can say I've never tried airsoft, and would like to try at some point or another. However I have to admit that since the airsoft pellets don't leave any kind or mark on the clothing, it would be far too easy to cheat. And don't think that they don't make paintball guns that look basically like the real thing.

Yes that is in fact a paintball gun.
Follow my boring ass life

I started a blog!
Top

Sadly I have yet to play either paintball or airsoft (although I like both, and I have shot airsoft rifles in the past). However, for my school's safegrad, the entire grad class will be going paintballing. That, I am looking forward to.

Back in High School we used to play paintball every Sunday. It was like church, becuase you always showed up to the same place once a week, without having to make sure everyone else would show up. It was garunteed that someone would show up and 3 or 4 games would be played. Typically it was 3v3, but it was always different people each weekend. One weekend the paintball shop in St. John's had a large game, and we had 18 players from school show up and we managed to all get on the same team.

I've played once since moving into St. John's, and that 1 time I got shot in the head. The ball went 1mm over my mask and hit me in the temple. I dropped to the ground and was blind for a bit, and 2 days later I still couldn't concentrate enough to take notes in class. There is a video of it on someone's hard drive, but it'll take some work finding it. Our guns typically fire over 350 fps, and you aren't supposed to shoot over 300.
Top

Everytime anyone ever mentions paintball I'm just more and more set on my way of never playing it. The amounts of comments of people getting shot in the nuts is just horrific.

I'd rather be lazy and get up next day not achey and bruised and wishing I wore two cups rather then one. You may think its a boring way to live, but I'll enjoy myself regardless, just wish all the asshats at work werent determined to get me in a field so they can flog me with plastic balls of paint.