It's fantastic, and that's all I have to say about it.
Top

And with that, I can never sleep again.
Twitter
Top

Awesome guys, yet again. Deffinate Spaced influence on the first few shots... then the story kinda swept me up and I stopped noticing

Is Morgan really going to California for a couple months? Say it ain't so

Also like that Kathleen is considerably more scary than Graham, and that, of the two of them, he seems to be the one that might go walking into doors.. as it were.

I've never even come accross a Hardy Boys book before, but I presume it's got a plot that's transparency is akin to that of glass. I've not some accross Brad's other book either, but I would be interested in reading it..

The hard boys books are as transparent as scooby doo.
Tonberry's poked the dutch again.

Yay! LaserDisk!!! I've got one of those players at home. Unfortunately no the HDTV version of it.
Top

Oh I see what you did there with the Nueralizer. Inspired by the comment that the Paul-flash made a whining up noise like the MiB nueralizer?

Outstanding. Simply outstanding! The writing was superb, and there were so many great lines in this, it was like CH meets Rapidfire. Funny, well acted, well edited. IS THERE ANYTHING I DIDN'T LIKE? No, no there isn't. And here I thought all the poop jokes were going to seem old or immature, but they just work so well. And they're so funny!

Brad as the grizzled PI? Goodness me, I do believe I have a case of the vapors. (Graham and Brad as The Twelfth Doctor and Captain Jack, plzkthx. Seriously, the BBC doesn't know what they're missing.)
Top

I have to say that I didn't like cH7 that much, but I like this one (despite all the poop jokes). The memory erraser was fun.

kinda curious what Photo shopped images would look like of kathleen beaten up. not that i want to see her find bodily harm, just wondering. may try to make some.

While I love the photoshop challanges; I don't think I'm gonna do this one... sure you can blame me for it though if but for the sake of a joke

Also; Morgan, have a nice tripp. you will be missed.
Deviantart: http://warran.deviantart.com/
Tumblr (Not NSFW anymore): http://thesmeggyone.tumblr.com/
Top

damn my office internet, I can't watch it until I get home.

Oh wow. You were right Graham, this is solid gold. However, I must refrain from congratulating you and nitpick apart your video. As follows.

During the Morgan and James scene, where were a few over-Morgan's-shoulder shots where Morgan was looking at James, but outside of those shots Morgan was not. (2:50 - 2:55)

Also: The "Was that fedora red the entire time?" line was kind of fourth-wall breaking. Since the cH fourth wall is fragile enough as it is...

Damn, best cH yet guys. Cudos to Matt and James btw
Sex is like air, it really doesn't matter until your not getting any
Top

I enjoy how the commodore hustle version of the LRR crew makes sketches that are kind of lame. This makes for great possibilities.
Top

Aw man that was so god damn funny. I nearly fell off my chair during the dream sequence and the "I'll show you how vincable your balls are" line.

This vidya was full of lols and made up for last weeks. I only wish hustle came out more often.
Top

Hey... wait a minute. There was a dead body in this episode, and Paul wasn't playing it?

gryffinp wrote:Also: The "Was that fedora red the entire time?" line was kind of fourth-wall breaking.

Very intentionally so. That's why I love that joke so much.
Top

Smeghead wrote:Hey... wait a minute. There was a dead body in this episode, and Paul wasn't playing it?

Who did Morgan kill this time?

Maybe THAT was Andy's cameo? 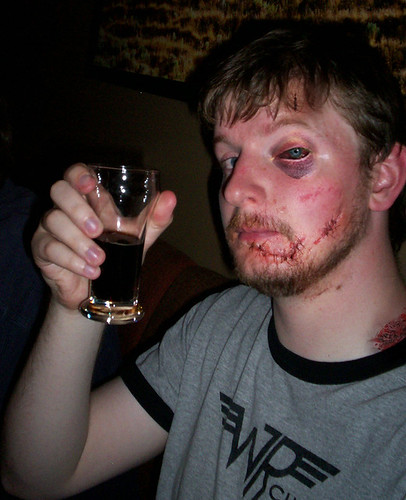 couldn't find a image of Kathleen but i did find out what happened to Gram when he said that it looked like she ran into a door... looks like she ran him into a "door".
"traditional?! what about this is traditional? you're not a 8 year old girl trying to sell me a cup for a nickel, you're a mid twenties predatory sales fiend trying to accost me with second rate citrus beverage!"

That's painful to look at, Fox. Why did you feel the need to do that to my eyes?

Wow....both in regards to the video and the above picture.

Apart from the slightly out of place looking eye, that is worryingly good

yah the eye troubled me a bit. not bad for 15 min of work
"traditional?! what about this is traditional? you're not a 8 year old girl trying to sell me a cup for a nickel, you're a mid twenties predatory sales fiend trying to accost me with second rate citrus beverage!"