My submission, I thought that for Mike's plus three abillity there was no better card than Booster Tutor from unhinged. I decided I wanted him to have a commander focus so Symbol Status seemed like a good fit as in commander you will have lots of permanents from different sets and hopefully you would be opening boosters from different expansions with the +3. Finally the ability of Richard Garfield P.H.D seemed like a great flavor fit for commander as you can't choose the same card twice fitting into the singleton nature of the format.
The casting cost was chosen because it has the color of each of the cards his abilities are based on and I felt that 5cmc was a fair casting cost. I debated making his casting cost BUGRW but I felt it made more sense to have the colors based on his abilities and made it a bit easier to play him in commander decks that don't have all 5 colors

Here are the emblem and the token as well, hope you like it All my current Commander Decks
I stream Magic http://www.twitch.tv/acowen Tune in for EDH Fun Times!

The wording is a bit too tight, but I think the idea is there.

Edit: SIIIIIGH. Still not happy with it. Stupid word limits.

The last ability would be better written:

"Each player sacrifices all Booster Boxes they control. For each Booster Box sacrificed this way, each player searches their library for one permanent and puts it into play."

I played James in a bit of one-on-one. I managed to win, partly due to the fact he couldn't hit any red to cast Rakdos Return to kill me. Though I realized after it wouldn't have because, if I remember correctly, I had Gisela on the field, which would have halved the damage I took. But yea, it was a pretty fun game.

I also played in Kathleen's second commander game. And I had literally no effect on the board position, so I just scooped. Had that changed the game at all, I likely wouldn't have. But I figured that I wasn't doing much anyways. Plus there was a panel I wanted to see... which I had to walk around the entire convention center to find, and then found out was canceled.

Love the podcast and i have a ton of revised cards, my dad kept them from when he played and gave them to me, actually have just about all the cards you opened on the crack a pack.....shame they are not worth that much...... ah well.
Those Mike Gills events sound awesome (if tiring and carpel-tunnel worthy) and something like that planned to last all day could prove interesting 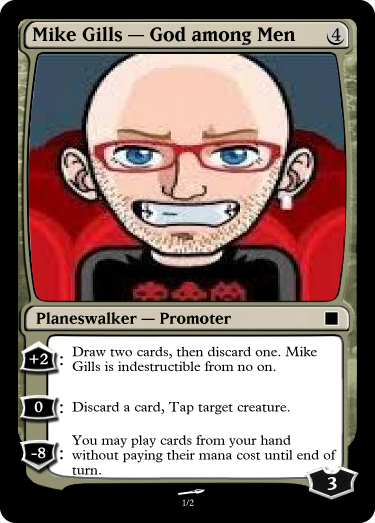 my idea for Mike Gills planeswalker
With these words, I do Declare....Check my blog

i dont own the art btw, i found it on google images and thought it looked ace
With these words, I do Declare....Check my blog Given that a lot of the discussions surrounding him in the pod-cast was
about the meta of drafting I tried to incorporate the pick all of a kind
draft in his final ability. and since it seemed like card draw would match
this ability quite well I thought that blue would be the colour for him.

For the background I wanted to go classic, and since we already made our
card draw association what could be more fitting than having him planes
walk back to the library?
Last edited by Eagi on 11 Apr 2013, 22:13, edited 2 times in total.
Top

BTW if there is a better way to word his final ability I would be really grateful for a correction. the temporary exile felt sort of clunky but where else would you put them while shuffling the rest of the deck?
Top

"Name a card. Search your library for all cards with that name, then shuffle your library and place the named cards on top."

I think the exiling bit is not required. A bit of commonsense is all.
Top

Also, I like that one, feels very much like a playable card, but I think the final ability may be overcosted; I see the first ability being almost exclusively the one played, although I understand how the second and last are meant to play with each other. Drop the last one down to -4, maybe?
Top

Yeah seems like a logical balancing edit, Basicly I wanted him to be a bit tricky to have go of. but six was a bit much to be sure.

Thanks for the assist!
Top

I didn't want him to bring in extra cards from outside the game. I think I managed to make it suitably broken though. Just like those rotisserie draft decks sound.

Colourless mana cost to go with the first ability. I considered making it WUBRG, but then the first ability is kind of pointless, because you've already got mana variety in play. Second ability is "Empty your hand into the stack. Opposing player probably tilts." Third isn't broken to the same extent. You have to win that turn if you cast it. But then you do have every spell in your deck, and probably the mana to cast enough of them, given that it'd be turn 12 before you could cast it.

Of course, if you manage to extend the game until both those resolve, it becomes "Put the best spells in your deck onto the stack, opposing player tilts."
Top

doubling season. Also, that really feels like it should be 2UUG. G because of +1 and UU because of the power of both of the -* abilities.
Formerly madAlric
All of the Crapshots in one place
Top

Doubling season would work well with my one too, although I imagined pairing it with Populate or anything that can pip the enemies boxes for one.
Top

Here is my submission, trying to keep it playably broken. Green for money, blue for card draw, and Orzhov for greed.

I just had to comment that sorting all those cards sounds like heaven to me. Perhaps it's odd (okay, it is odd), but I love sorting cards. Love it so much.
My husband's going to be Buckaroo Banzai when he grows up. I'll be Emma Peel. Together, we'll fight ignorance and crime!
Top

Two weeks with no TTC? ::Crawls through the desert of withdrawal...::

Help me... I keep buying old packs and unopened decks of magic cards to send you... I need an intervention...
Top

I'm pretty sure they've skipped the last two weeks so they'd be able to have all four regular cast members in TTC.
Formerly madAlric
All of the Crapshots in one place
Top

We've got one recorded! I'll put it up in the next day or so.
Sorry for the delay!
Top

Graham wrote:We've got one recorded! I'll put it up in the next day or so.
Sorry for the delay!

All my current Commander Decks
I stream Magic http://www.twitch.tv/acowen Tune in for EDH Fun Times!

I will make up the package and send it out tomorrow. (or as soon as I have the time and brain cells to rub together...)
Top
Post Reply
46 posts