by Graham
Graham and Paul chat with some special guests as we learn the ins-and-outs of Highlander, and its frugal cousin. Apologies for the crackly audio.

by Lord Hosk
The Orahan Vipers ability is also different from death touch because its combat damage. Death touch is "Any amount of damage this deals to a creature is enough to destroy it."

Deathtouch can be any damage. the viper has to be "combat damage"

by Yaxley
I saw the thread before watching the podcast and my first thought was, "ZOMG, Serge's deck must run $2k at least. I don't know whether to be happy or sad I called it so closely.

That aside, since first introduced to the format (probably by Alex's twitter), I've taken my Ezuri commander deck, which was pretty crap, and turned it into a highlander deck. I haven't even changed any of the cards yet. Same deck just seems way better in a different format.

by guidance
My friend gave me a bunch of his old cards and a lot of them came from cold snap. I thought it was normal for a little while to have snow covered lands.
Also anyone else getting some weird crackling/zapping sounds in the video?

by Koneko
Awesome podcast guys. I'm always interested in the talk on taptapconcede but as graham said this edition was fascinating. Being poor as hell, I was keen to see what went into Alex's budget deck. Thanks for the deck list

by Eric the Orange
I don't know much about modern magic but If I were to make a banned list I'd say nothing that wasn't reprinted past 4th ed. Soooooo many broken cards pre 4th.

by zombub
Great cast as usual, I'm from Australia and have heard about Highlander but never delved too far into it, mainly because it's terrifying. My local store actually has their own format called 99+boss which is similar to EDH but is only 1v1 and they maintain their own ban list for it, it's a lot more ruthless and competitive and A LOT faster.

One question, what's Paul using to check the price of Tabernacle that shows prices for other languages?

by Professor STAFF
TapTapConcede has officially arrived. This was not only your strongest podcast of TTC yet, but also one that I feel should serve as the template for what future TTC podcasts should be like.

Alex and Serge
Alex and Serge were a perfect addition to this podcast. They came across as knowledgable, and most of all energetic. This was a lively and informative podcast this week. I'd love to see Alex and Serge return regularly. It would also be great to see guest appearances from people like Jer, and anyone else with a lot of interesting things to say about Magic.

Highlander & Budgetlander as Topics
Having clearly defined topics really helped. I've said that the Friday Nights videos benefit from having an aspect of "teaching" or "explaining" a format to character, and I think that the podcast benefitted greatly from the focus of having to teach and explain these casual formats. I also really liked the contrast between Serge's expensive deck and Alex's budget one.

Posting Decklists
Kudos for posting the decklists. I'd love this to be a semi-regular thing. I don't know if people are guarded about what's in their decks, but I'd love to see more decklists posted after being talked about. For example, Graham's treefolk deck has now been mentioned in four (4) TTC podcasts. I'd really love to see what's in that thing! Kathleen mentioned she has a Paupers Cube. I'd really love a podcast that talks Paupers and Cube and then has Kathleen's Paupers Cube list posted.

Which brings me to...

Suggestions for Future Podcast Topics
*Paupers
*Cube
*Block Constructed
*Modern
*How To Organize Casual Formats At Your LGS
*Fostering Better Behavior and Better Play
*Supporting Your LGS Even If You Can Buy A Card For $1.00 Less On eBay.

Big Suggestion: Have you considered tying Friday Nights and TapTapConcede together in terms of topic? For example: What if the next Friday Nights explored Highlander and Budgetlander? I like the idea of watching an episode of Friday Nights, then listening to TapTapConcede explore the format and cards in more depth.

Great job, everyone. Hope to see more of Alex and Serge in future podcasts.

by Can't Wear Hats
Awesome episode guys, highlander and budgetlander sound super fun (although I think budgetlander is more in my wheelhouse), and the deck lists are really helpful. Looking forward to the next one!

I know you didn't set a card challenge but I made some cards to go with this episode anyhow: 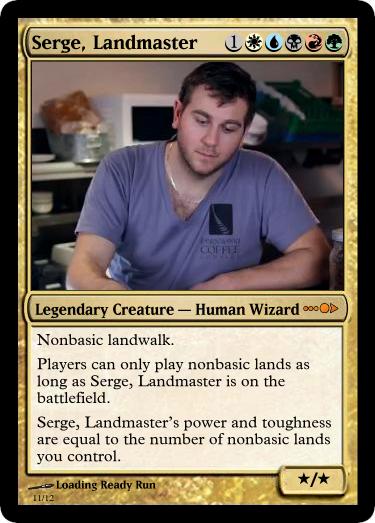 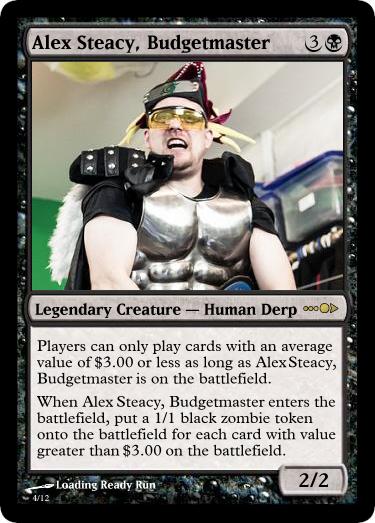 While I was making these I found out that nonbasic landwalk is actually a thing, but there's only one creature that has it. Dryad Sophisticate.

by Graham
Professor STAFF, I will do my best to get the Treefolk list online as soon as I can!

by Redd232
I really like Alex's Zombie deck. Only thing I'd try is adding in Kamahl, Fist of Krosa. I'd love to see what would happen with Kamahl and Plaguebearer together on the field. In theory one would be able to wipe out your opponents mana base.

by iamafish
good cast guys. I was glad the surge turned down the jargon though, i was getting lost!

I'd love for you guys to keep talking about different formats in TTCs. I'm especially interested in what the hell a cube actually is!

by Dominic Appleguard
A cube is a big box of cards you choose yourself. You can then shuffle it all up and draft with the cube as though it were a set of random boosters.

That cube can be anything you want. James has a "pauper cube" of fun commons. MTGO frequently runs cube events using crazy old cards (like the power nine, and other banlisted silliness).

by erjhunter
Actually, the Ripple cards from Coldsnap were specifically designed for limited play. Since it is a small set, you end up seeing a ton of the same cards over and over again (as anyone who has recently drafted triple DGM can attest, and Coldsnap is an even smaller set than DGM), and if you commit to it (and dont get cut) you can end up building a deck based around Surging Flame or Surging Sentinels (or even Surging Might). It's worth noting that when you Ripple into a card, that card's Ripple trigger also happens, so if you have enough of a specific Ripple card you can basically go through your entire deck.

Coldsnap has a ton of weird tricks like this to make a triple small set draft actually workable and not dumb and instantly solvable (ok, well, it turns out it was actually dumb anyway, but they TRIED to make it not dumb). The Ripple cards, the cards in the Rune Snag cycle, the Recover cards, and all the Snow matters stuff (when drafting Coldsnap you had to draft your Snow-Covered lands, much like Gates) allowed there to be at least a few more viable archetypes than there normally are in a triple small set draft.

All in Aurochs was actually a somewhat viable strategy, thanks to Aurochs herd.

by DarkAbyssKeeper
Another reason they didn't reprint Armadillo Cloak: It stacked with itself (and would stack with lifelink). Put two cloaks on a bear, swing for 6, gain 12.

by UNHchabo
On the zombie dogs: I'm pretty sure sled dogs react to the sound of the whip, not actually being whipped. Zombies in popular culture tend to have very sensitive hearing, and dogs have sensitive hearing, so to me it would only make sense that to a zombie dog, a whip-crack would be super loud.

Can't Wear Hats wrote:I know you didn't set a card challenge but I made some cards to go with this episode anyhow

I'm in on that, but just Serge. Alex already has a couple.

EDIT: Switched his effect from "beginning of upkeep" to "end of upkeep" to prevent from going off weird with the cumulative upkeep.

by tamaness
That seems... almost playable.

by Drecon
I really like that you can basically plop it down turn 2 and keep on adding counters to all your lands until you've doubled your mana turn 5 and play some really sick stuff...
Come to think of it, probably broken as heck.

by Utilitarian
To be fair "potentially or obviously broken" is kind of a point of entry for most of the cards we have designed.

Graham wrote:Professor STAFF, I will do my best to get the Treefolk list online as soon as I can!

Cool! I am looking forward to it.

by Aaron Patten
That whole thing about Ice Age block not having a third expansion is misinformation. Ice Age block was Ice Age, Homelands, and Alliances. There was no plan to have another set until over a decade later. When cold snap was released it was a re-visitation to Ice Age block. The plan to play Ice Age block as Ice Age, Alliances, Cold Snap was not proposed until the release of Cold Snap and there was no sign that this would ever happen until after Cold Snap was announced. Also, the concept of three sets per block was present at that time. For example The Dark and Fallen Empires were, at the time of their release, considered expansions of the Legends edition. Arabian Nights and Antiquities could be considered a part of "The Gathering" block though that was not the commonly held belief of the time. "The Gathering" was originally intended to be the name of the expansion of Magic that was Alpha, Beta and Unlimited. It was not decided until shortly before the release of Arabian Nights that it was important to have the back of the cards be uniform so that they can be played in the same deck. That decision was what made the name of the game "Magic: the Gathering" instead of just "Magic" with an expansion title of "The Gathering".

by Aaron Patten
Yes. The decision was made much much later though.

This video is great btw.

by mrverbal
The dark and fallen empires were absolutely never considered expansions of legends. Not in any way.

That aside: Interesting discussion. I'm heavily involved in the Australian highlander scene (talking about Victorian highlander was a tad confusing, as one of the two parts of Australia which plays the most highlander is Victoria. Damn colonial brits and their lazy naming).

Do you have a link to your points list? It would be interesting to read. (Although possibly confusing; I'm not sure I can understand a list which has wheel of fortune at half a point*)

Also, what was the reasoning behind going to 14 points? I'm assuming someone over there heard about the Australian one (as, to the best of my knowledge, it was an idea that Merlyn** and Chook had to fix their first attempt at highander which was sixty cards, no points***) so am curious.

* The unified Australian list is 7 points. Wheel of fortune is 2 points, so would be four on your list. (There are only 4 points options; 4, 3, 2, 1)
** Yes, there was an Australian magic player named Merlyn.
*** AKA decks that are horribly broken and mostly just the vintage restricted list.
All times are UTC-08:00
Page 1 of 1
Powered by phpBB® Forum Software © phpBB Limited
https://www.phpbb.com/