Mara Kalat wrote:Also, I'm pretty sure that, since the card has a colour identity already and is the thing turning into a creature it would already be considered green.
Like the old run of Veiled Enchantments, which as you'll notice also don't specify the colour in their oracle text.

Maybe? I don't know. Dryad Arbor certainly needed a color indicator, but maybe that was just because it didn't have a mana cost. Your Veiled series are turning from blue enchantments into blue creatures. The Treefolk would be turning from a colorless land (because all lands are colorless, unless they have a color indicator) into a creature. We might need a judge on this.

According to the Comprehensive Rules...

105.2 wrote:An object is the color or colors of the mana symbols in its mana cost, regardless of the color of its frame.

Even though the Treefolk is entering as a land, it still has a mana cost if the rules ask for it, such as for determining color.

As an example, one of the cards in the set is Unicorn Foal. It's a creature that costs W and has "If Unicorn Foal is a land, is has "{T}: Add W to your mana pool.""

Let's say that I play it as a land on my first turn and then cast Reward the Faithful, which costs W and reads "Any number of target players each gain life equal to the highest converted mana cost among permanents you control."

The result would be that any number of target players would gain 1 life.
Top

During the begining of your upkeep, you may pay GG. if you do, put a 0/1 Seedling Artifact creature token under your control

Seedlings you control have: Tap, Sacrifice this creature, add one mana of any color to your mana pool.

the idea kinda came from a discussion between me and my friends of how you couldn't have a creature that made lotus petals and make it balanced.
When all else fails.... use duck tape

If he died the petals would lose their ability
Top

jadamelio wrote:If he died the petals would lose their ability

EDIT: To clarify, the argument i'm trying to make is that in vorthos terms, since we no longer get lotus cards, Nikolus is litraly the only person who knows the secret to extracting the power of lotus petals from seedlings, as he dies, the secret dies with him.
Last edited by Spartan_N30 on 19 Jun 2015, 22:19, edited 1 time in total.
When all else fails.... use duck tape

One thing that bugs me slightly about the Essence mechanic is the memory issue, keeping track of which permanents are lands. It might help if playing the card as a land requires that you place a counter on it (the flavor of what kind of counter that is needs to be determined). The keyword could read as "As long as CARDNAME has an [essence] counter on it, it is a land". That might open up design space to play around with effects that remove the counter, because doing so will transform the card from a land into something else.
What do model railroading and Magic: The Gathering have in common?
I don't have enough time or money for either!
http://wpandp.com/Home/the-rest/borderlands-a-custom-mtg-set/eclipse-an-expansion-for-borderlands/
Top

WP&P wrote:One thing that bugs me slightly about the Essence mechanic is the memory issue, keeping track of which permanents are lands. It might help if playing the card as a land requires that you place a counter on it (the flavor of what kind of counter that is needs to be determined). The keyword could read as "As long as CARDNAME has an [essence] counter on it, it is a land". That might open up design space to play around with effects that remove the counter, because doing so will transform the card from a land into something else.

Actually, I tried that at first. The problem was that it made the card text longer by an entire line, which makes the font smaller, which results in commons that have extremely small text, and nobody wants that.

Asthanius wrote:It shouldn't be a problem as long as players keep their lands and creatures separate.

I understand. But the problem is that the game doesn't require players to separate lands and creatures in any particular way.

What if you just say that Essence means "You may play this card without paying its mana cost. If you do, CARDNAME enters the battlefield with an [essence] counter on it, and counts as a land played this turn."

In fact, the whole "As long as CARDNAME has an [essence] counter on it, it is a land with [ability]..." thing wouldn't NEED to be there; you might have some cards that just have a free alternate cost as a tradeoff for using up a land play. Maybe some creatures just get nerfed or buffed by having an essence counter, rather than turning into lands. Maybe that's venturing too far out, but they extra layer of abstraction afforded by the counter makes this rather versatile.

Another approach that can be taken would be to exile the card instead of just putting it into play, and instead create a token land with that ability. Sort of like how the Cipher cards worked, as psuedo-enchantments, you pull out a generic token land (print some up like they did for Morph creatures) and stack the essence card under it as a reminder of the land's actual ability.
What do model railroading and Magic: The Gathering have in common?
I don't have enough time or money for either!
http://wpandp.com/Home/the-rest/borderlands-a-custom-mtg-set/eclipse-an-expansion-for-borderlands/
Top

Regarding land tokens, see MaRo's response on the topic.

But I did re-word Essence and got it to fit on the same number of lines. Here's what it looks like now, with an example of something I'm trying out with the mechanic: 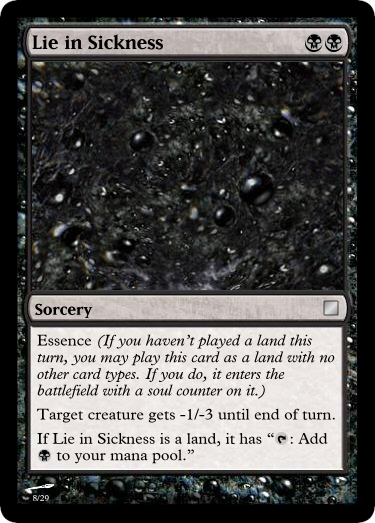 Oooh... just thought of something. With those soul counters, you could make a land that acts like a "land lord"!

The set already has something that functions similar to a land lord, and I like the way that it plays. 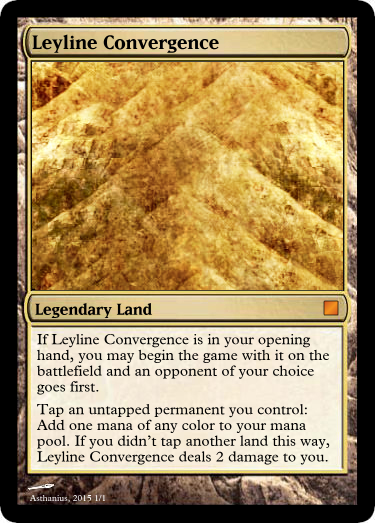 Rules question: what happens if you have two players with a Leyline of Convergence?
Top

I think since hands are drawn after turn order is decided, the APNP rule applies
Top

Basically. In a four-player game, let's say that Player 2 is going first. Everyone draws their hands, and it turns out that Player 2 and Player 3 both have a Leyline Convergence they're starting the game with. First, Player 2 chooses an opponent. Then Player 3 chooses. The "stack" now has Player 3's choice above Player 2's, so their choice "resolves" first. When Player 2's choice "resolves", that's the player who's going first.
Top

We actually need a judge call, this card has to take effect before play, so there is no active player
Top

Maybe the card should just be formatted like the conspiracy Power Play and have the starting player chosen at random between whomever is chosen.
Top

Or does he legend rule apply?
Top

There. That seems sufficiently wordy for a mythic land in a fan-made set. 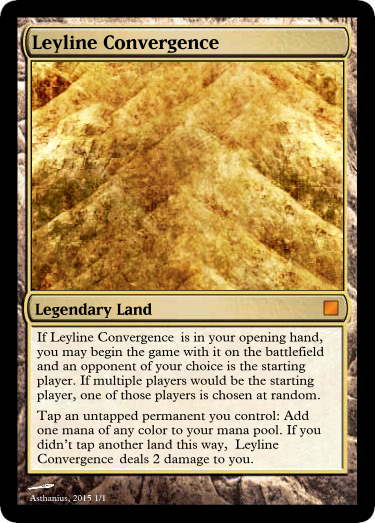 The legend rule won't apply because that's not how it works anymore.
Top

Hey, I've got a couple of cards I made for a color-shifty design challenge.

The first one is a color-shift of Relentless Assault. The second one isn't directly tied to a previously printed card, but more the general feel of a color. In this case, red. Meteoric Rise - (4)(R)(W)
Instant
Target attacking creature gains flying and indestructible until end of combat. When it loses flying this turn, sacrifice it. If you do, it deals damage equal to its toughness to each creature defending player controls.
When sufficient altitude is gained, the impact from the resulting fall can level nations.

I'm rather unsure about the costing on this one. It's a suicidal combat trick, or a removal spell that bypasses regeneration/existing indestructibility at the possible expense of nuking your own board. I also feel like it might need some wording adjustments. Thoughts?
Top

Yeah... the wording is a bit odd on that one.
For one it'll need to be sacrificed by the controller instead of just being sacrificed.
Beyond that I'm not sure about the destruction being reliant on Flying... perhaps just simplify it to something along the lines of "Target attacking creature's controller sacrifices it. If you do it deals damage equal to its toughness to each creature defending player controls"

I get where you're coming from flavour-wise with the Flying, but Fling (for example) doesn't have it either even though it goes for the same type of mechanic.

As for the cost... I'm not sure, depends a lot on the context and the format. 4RW does not look unreasonable to me though.

I'm not sure what the point of giving a creature indestructibility until end of combat is, if the creature will die (be sacrificed) at end of combat anyways. I suppose it gets past first strike damage, but how necessary is that?

It might actually be more fun if you have the challenge of keeping the creature alive through combat in order to be able to sac it for its impact effect. Lose the indestructo and the casting cost could be reduced, too.

Maybe give a +1/+0 boost, too. Then you have some tension about whether to play this aggressively or as a removal spell; to work as removal, you have to let the creature hit you for a bit more than it would otherwise.

The Flying and +1/+0 boost can be "until end of turn" effects, to avoid too much timing confusion with end of combat triggers. Just trigger the sacrifice then, and like Mara said make sure to word it that the creature's controller sacs it.
What do model railroading and Magic: The Gathering have in common?
I don't have enough time or money for either!
http://wpandp.com/Home/the-rest/borderlands-a-custom-mtg-set/eclipse-an-expansion-for-borderlands/
Top

0 untill end of turn, creatures you control have "Tap: Add one colorless mana to your mana pool"

Jorak seems really good for a two cost Planeswalker. Essentially on turn 3 you could have 6 mana at your disposal with a decent opening hand and potentially more if you have any 0 cost creatures. That's really potent I'd think.
The balance is that the 0 ability only produces colorless, but if you have all the colors of your mana base in your lands it probably doesn't matter.

I would probably cost it a bit higher maybe 1GW or 2GW, with 3 loyalty and have the 0 ability be a -1 ability instead. But it probably depends on the set. If this card is designed to have a higher costed set of cards that need the ramp it's probably fine. But this is just my opinion.