Well, those examples, with the exception of Scapeshift, show a sped up game flow not necessarily brokenness. Because they are all lands, they aren't restricted by color. Theoretically they could go into any deck and the decks that speed out threats are likely also facing sped up answers. You might get some swings in with hasty creatures, but they are just as likely to be met with resistance. The biggest problems I can think about is probably Landfall and the aforementioned Scapeshift (of course there could be more I am unaware of). I could probably add a line somewhere that prevents sacrifice and targeting from other spells or abilities on the Mirage lands. Landfall might be trickier as it could run rampant but I don't know the older landfall cards that well to be sure.
Top

I feel like this line of thinking is akin to saying, "It's okay if you have a Black Lotus, because everyone else gets to have a Black Lotus too." If you introduce fast mana like this into any format (even Standard), you're going to have very swingy games in which the person who plays more of these lands in the first few turns is able to ramp out bigger threats faster; the person who draws two of these lands will have a massive advantage over the person who draws only one. It'll also be difficult to play good aggressive or midrange decks, as having access to this fast mana makes it much easier for ramp decks to stabilize (what's Mono-Red supposed to do after T3 Dragonlord Atarka decimates its board or Abzan after T4 Ulamog exiles its Siege Rhino and Anafenza?) I think that this much ramp would be ultimately extremely format-warping. A fairer version would probably be a land that taps for {1}, enters tapped with one 0/1 Eldrazi Spawn or similar, which would at least allow your opponent to interact with cards like Twin Bolt or Radiant Flames and wouldn't ramp as fast.
Top

_Because_ they're any color, you now have ramp that goes in any deck, which my initial reaction is that it's pretty color pie breaking considering the low cost to put them in your deck. Maybe if you could sacrifice the land to create the two mirage tokens?

Adding land tokens is significant; it allows you to turn 3 Nissa and then have her flip. Or have Dragonmaster outcast up and running for your third upkeep.
Top

Okay, that's a fair assumption. I reason that you're saying to make a creature because land is more difficult to deal with even in token form? I could certainly retool it. Perhaps it only makes the additional land (probably going to just make one instead of two) if certain conditions are met? Like having lands of a particular type or something to do with not having any other mirages or something along those lines.
Top

I think Erebos would be proud, as well as my former philosophy lecturer: 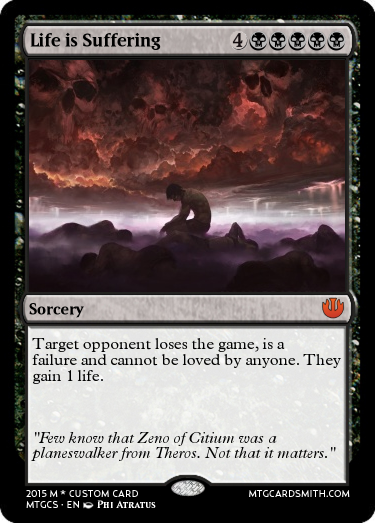 It is more balanced this way

Goddammit. So I got a weird idea in my brain. The idea is that this would be released in a Commander set, with art showing Fblthp staring shocked at the viewer while a mirage of planar images float behind him.

Edit note: Changed mana cost to 3UU from 3BB; while my original intention, absolutely a mistake.

+1 Draw two cards. Shuffle Fblthp of the Unknown Spark into his owner's library.
-2 Target creature gains Protection from Creatures until end of turn.
-5 Exile all permanents and shuffle them. Deal out one card for each player; you may choose which player gets which card. Repeat until all permanents have been dealt this way.

How would you cost this?

I agree that it sounds green, but I think it can be templated shorter in this way: "Each player may search his or her library for a legendary creature card and put it onto the battlefield. If a player does, they shuffle their library."
Stuff I do: Satan's God - A Webcomic | Fiend Wisps - My art | My photography
Top

JackSlack, 100% not happening in black border. You could have the start of an Un-walker though.

I don't see the Legendary tutor seeing print in any black border set. Just imagine this card in a Tron deck...

Being able to spend some amount of mana to put a creature from your library into play while your opponent doesn't (and let's face it, there will be a lot of times they won't have a legendary in their deck), is extremely powerful.

Another option is making it an enchantment that allows players to do so during their upkeep.

Or allow each player to search for a creature card. Put legendary creatures onto the battlefield, others into the hand.
Top

SixFootTurkey wrote:JackSlack, 100% not happening in black border. You could have the start of an Un-walker though.

Not even in a Commander precon? You've got a bit more scope for goofy silliness there and I don't think anything in there is truly broken; I'd consider 3BB for draw 2 to be overcosted by one. The second ability is very good, but I don't think it's ridiculous for 3BB. (It's a bit out of colour pie, I agree.) And the last one requires buildaround. Is it just the goofiness or is there abuse potential I'm missing?
Top

@JackSlack: You literally cannot activate the third ability without the use of another card like Clockspinning. That sounds like something that would never be printed in black border.
Top

1) Black doesn't get raw card draw; they must pay life (or creatures) to do so. Even supplemental products must obey the color pie.
2) Inability to ever use the -5 barring Proliferate, Doubling Season, a Stifle effect, or Teferi's ultimate combined with Chain Veil. This isn't going to happen.
3) Shuffling players cards together. The owner of a card is public information at all times. This makes shuffling them together problematic from more than a logistical standpoint (Player A not wanting their cards to get mixed in with Player B's).
4) While every color can get protection, it's primarily in white. White is also the color that typically (only?) grants protection. I could see this ability in any other color if it was super flavorful, but in black...

While supplemental products give a few extra options, they must still abide by general guidelines. 'Chaos' and 'Diplomacy' (multiplayer elements) are more things that commander products open up rather than 'silliness'.
Top

Fair enough. Bridge too far, I guess. (A pity, since it was exactly that idea that lead me to the design.) (Also: Proliferate, Doubling Season, many, many ways to activate it.)

Edit: Oh and SHOOT. Meant that to be 3UU, not 3BB. Duh. That at least deals with the draw thing.
Top

That definitely eliminates some of the issues.

There's definitely room to play with it, it just can't function as is.

For instance, the +1 ability, you could make it 'you may draw two cards, if you do..' and then have an ultimate that sits at -8 or so. This would give you a way to use the card as it stands, but also allow for build-around.
Top

The eternal question of 'feature or bug'?

To me, if the ultimate can go off without some cheating, it's not Fblthp. He's meant to be the deadly joke character; seemingly useless until you suddenly go, "OH. He can do THAT."

Edit: Note, this is me saying, "Yeah, probably not a workable concept, at least not in a way that would satisfy me". But my MtG is a very goofier place than most people's, so that's probably not too surprising.
Top I know this super broken with big auras like Eldrazi Conscription, but in a closed limited environment, I think it could be pretty damn fun.

I'd up the Aura Swap cost to something like 2B. Seems more fair, especially since Aura Swap happens at instant speed.

How about 1B or BB for the aura swap? Arcanum Wings costs 2 to cast and 3 to aura swap, and it doesn't debilitate the creature it's on.

BB Aura Swap cost sounds good to me.
I was already comparing it to Arcanum Wings, and noted that it's blue, where this is black. When blue and black grant the same types of effects to things, black typically pays more for them than blue does.

I was just thinking about someone sitting there and paying B, putting this on their creature, and then paying B again, swapping it for something like Consecrated by Blood. It is a fine card on its own and not broken, don't get me wrong, but paying BB instead of 2BB for that card seems a little broken.

Or... instead of a Common, you could make it Uncommon and bump the Aura Swap cost down from BB to 1B. I could see a B casting cost and a 1B Aura Swap cost on an Uncommon. But definitely not a B on both costs at Common.

It actually is uncommon, it's just difficult to see on the card render. Might try photoshopping that to be more clear. But thanks for the input!

Or, you could even reverse the costs. 1B for the card and just B for the Swap cost.

OK. This gets around most of SixFootTurkey's objections. It's in the right colour pie; running with draw and bounce. The last ability removes any reference to shuffling but the idea is made clear. (I hope.) It still feels like a frightened homunculus, running away, misdirecting, and then "WAIT WHAT" chaos inducing. Yes, I know, it still has a -5 that can't actually be used without some other trick, but as I said: I consider that the point.
Top
Post Reply
643 posts