Here's a version that swaps the first two abilities: 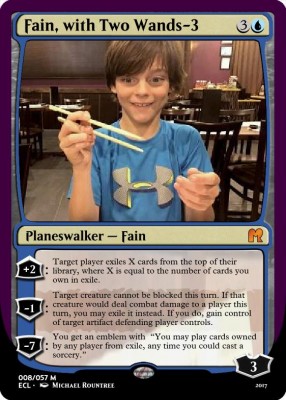 For some reason I dremt about this, but it stays in my head: a UB planeswalker with a -X ability that basically says "you may activate this ability as if it was a minus ability of any planeswalker on the battlefield, where X is the cost of that ability". How would you phrase such an ability?
Stuff I do: Satan's God - A Webcomic | Fiend Wisps - My art | My photography
Top

I would say that it needs to become a copy of the target planeswalker:
"-X: NAME becomes a copy of another target planeswalker until end of turn, except that its name remains NAME. You may activate a loyalty ability with a cost of -X without paying its loyalty cost as a second activation this turn."
What do model railroading and Magic: The Gathering have in common?
I don't have enough time or money for either!
http://wpandp.com/Home/the-rest/borderlands-a-custom-mtg-set/eclipse-an-expansion-for-borderlands/
Top

I like the combination of "can't attack alone" and a battalion trigger!

Flavor-wise I'm not sure I get why this is "raging", unless maybe it's in the sense of "raging hormones" that might be to blame for the goblin procreation. Maybe some other term would be appropriate, like "rallying" in the sense that their battle-lust draws more goblins to the fight.

I think it's too cheap as a 2-mana 2/2; I'd have this at least at 1RR. Alternately, make the token creation cost a mana to activate. In fact, that's exactly what I did on a card that is kinda similar - a 2 mana 2/1 that can spawn goblin tokens, in this case triggered by shuffling, to wit: 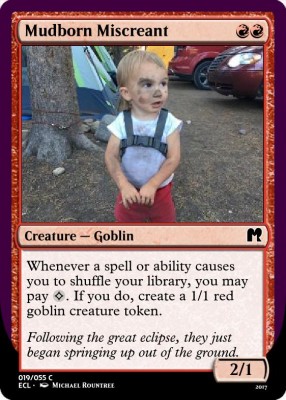 yep im not good at names or balance
Top

It's actually not that far off - I might make it's 'can't attack alone' into 'can only attack with 2+ other creatures' to make it fit.
Top

@WP&P To be clear, you are intending to use a colorless mana symbol in the cost? That means you can *only* use colorless mana, and not colored mana to pay for it.
Top

Yes, the card I showed was purposely using the colorless mana for activation, as there is a minor "waste" theme in the set this belongs to.

Basically, I went a bit overboard in giving mana fixing to enable 3-color decks, so I wanted to add a bit of challenge back in. For this card in particular, the "waste" theme is supposed to represent what is left over after The Great Eclipse happens (which changes things), so I only want the activation to be possible if "wastes" (colorless producers, not all are wastes) have been deployed.

HOWEVER - my first iteration of this card had no mana cost associated, just when you shuffle you get a goblin. I shared it because I came to believe that this was too good (especially for something that I wanted as a common).
What do model railroading and Magic: The Gathering have in common?
I don't have enough time or money for either!
http://wpandp.com/Home/the-rest/borderlands-a-custom-mtg-set/eclipse-an-expansion-for-borderlands/
Top

*Nod* makes sense. That said, it's a bit more complicated than your standard WotC common - they tend to like virtual vanillas or those with more limited use (triggers at a specific step, sorcery activations, etc).

I guess shuffling your library is (indirectly) a theme of the set?
Top

yeah, I *almost* gave it a named keyword; it just kinda grew organically into a sub-theme. I just wanted to call attention to shuffling, as it is a game action that feels a bit like what I want The Great Eclipse to feel like, an unpredictable randomizer. If you haven't guessed, this is a set designed around the August 21, 2017 eclipse, and the road trip that my sister's family and friends took to go see it out west. The set will be a Christmas gift.
What do model railroading and Magic: The Gathering have in common?
I don't have enough time or money for either!
http://wpandp.com/Home/the-rest/borderlands-a-custom-mtg-set/eclipse-an-expansion-for-borderlands/
Top

Also I am fully aware that I've been "pushing" complexity down into common slots for this, but that's because I want each card to be "playable" and interesting in its own way. I'm not developing a draft format with this. I'm purely going by the relatively small number of interesting photos that I could find from them, and designing both to the qualities of the image as well as to the established deck archetypes that these are meant to supplement. I'm paying no heed to New World Order, but rather just thinking of which cards do I want to print 3 of (uncommons), 2 of (rares), or 1 of (mythics). Commons will be printed 5 or 6 of in my collation. I'm actually going to bundle these as 9-card booster packs (9 because my printing method results in thicker cards, that's what fits into a salvaged wrapper).
What do model railroading and Magic: The Gathering have in common?
I don't have enough time or money for either!
http://wpandp.com/Home/the-rest/borderlands-a-custom-mtg-set/eclipse-an-expansion-for-borderlands/
Top

Ah, yeah if we *were* listening to NWO, my gut says use common for the enablers (things that allow you to shuffle), and uncommon for your build around rewards. Another option, would be to do a limited trigger ('at the beginning of your end step, if you've shuffled this turn') - that way there's less overall interaction, but still maintains the theme. (I mainly bring this up at all in case the idea might be useful for you if you haven't explored it yet.)
Top

This is a card that my nephew, who has an enormous collection of stuffed animals, specifically requested (i.e. "make a card with a picture of me in my stuffed animals storage bin"). You may recognize the Assemble The Legion genetics of it, however I'm doing a slightly different thing, for flavor.

At end of turn, you have to put your toys away... or at least make it look like you're doing so, by exiling one of your creatures. If you don't pick up your toys, you lose the privileges to play with them.

I altered the timing to trigger right before declaring attackers, so that you can get turn zero use out of this, and also be able to play it onto an empty board. This offsets the exile at end of turn, so ultimately it accumulates tokens at the same rate as Assemble, you just get the benefit of an extra attacker on your turn, so I guess it's like a half-turn ahead of Assemble. 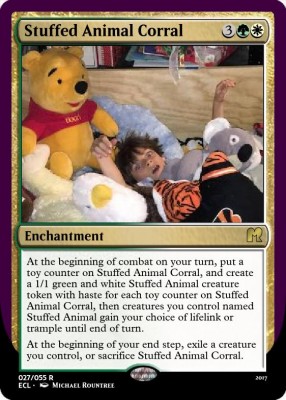 The icing on top - choosing lifelink or trample - was initially in there to offset the feel bad of having to exile, when it triggered on upkeep, because for the first turn you wouldn't have any token to exile and therefore had to give up something from your board. Now that I've got timing working on turn zero, you can just exile the first token. So, should I remove the icing? Or up the casting cost to 6 CMC?

It also occurs to me that Stuffed Animals maybe ought to be artifact-construct creatures, but that feels off for green white. Thing is, I really do want it to be green white, for its interactions with other deck archetypes (in the aforementioned gift card set). I could maybe add blue, but if I did it would probably need to be as a hybrid cost. Does being artifacts make the tokens even more powerful (such as with improvise) such that cost would need to be higher still?
What do model railroading and Magic: The Gathering have in common?
I don't have enough time or money for either!
http://wpandp.com/Home/the-rest/borderlands-a-custom-mtg-set/eclipse-an-expansion-for-borderlands/
Top

Ability redesign Rebound to Rebound N all cards with Rebound are now Rebound 1
Rebound N (when you cast this spell from your hand exile with N time counters and it gains suspend; at the beginning your upkeep remove a time counter. when the last time counter is removed you may cast it without paying its mana cost.)
Top

Interesting. From a purely mechanical sense I like the theory behind it, but I don't know how much it adds over the current iteration. Part of the problem with suspend was that its complexity could very easily overwhelm a less experienced player. This only uses half of suspend, but it's still effectively two abilities in one. Rebound on the other hand, has limited design space. This adds an arguably unreasonable amount of complexity for negligible design space improvement.

Basically, there's not much you can do with Rebound N that you can''t do with Rebound 1. Sure they will work differently, but you're unlikely to make 'Spell A' with Rebound 1 *and* the same spell with Rebound 2+. This means you end up with the same amount of cards available, and you're going to favor Rebound 1 anyway. Is it worth making the more common Rebound cards worse, in order to make a handful of Rebound 2+ cards - cards that aren't assuredly better than Rebound 1 versions of the same cards?

Often times less is more, simple is best, etc. I'm not seeing anything that makes me question whether or not this is one of those times.
Top

inspired by throne of eldraine for zendicar rising

Rally - whenever [card name] or another ally enters the battlefield under your control, create a Map.
(A Map token is an artifact with " 2, tap, sacrifice this artifact: search your library for a basic land card and put it in your hand, then shuffle your library.")