Also, you don't need the "instead of playing a land" phrase, esp. with my wording above. The limit on how many lands you can play will intrinsically apply to any card you play as a land.
What do model railroading and Magic: The Gathering have in common?
I don't have enough time or money for either!
http://wpandp.com/Home/the-rest/borderlands-a-custom-mtg-set/eclipse-an-expansion-for-borderlands/
Top 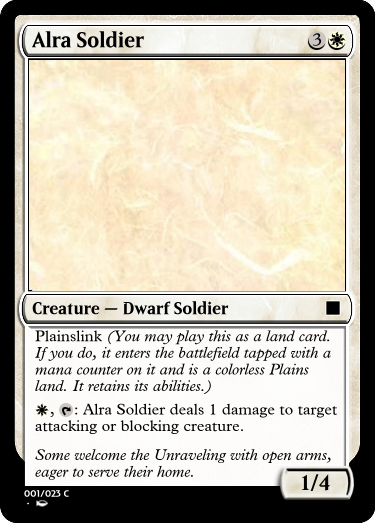 A silly card, loosely inspired by the absurd amount of freight my store receives every day:

Honestly? I really like that. You still have to pay the Equip cost once, but then you get a free instant-speed equip on something else. 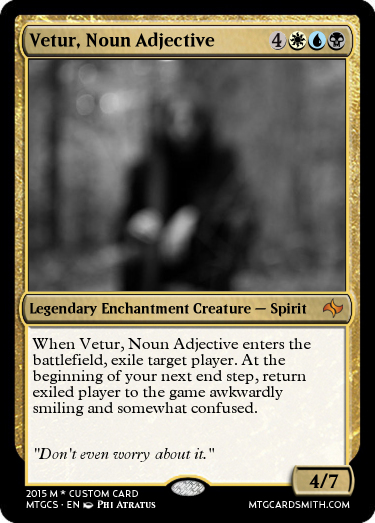 i thought about this design on my way to and from school... the entire idea is that the scavenger sub-type all have ways to get scavenge counters on them and they can each use the counters their buddies have.

This was originally meant to be mono-red but after looking at its ability, i realized its more of a green-red card.

Illusion of Choice (1)(U)
Instant
Look at the top five cards of your library. Exile one, then exile one face down, then put the rest on the bottom of your library in any order. An opponent choose one of the cards exiled this way. Put that card into your hand.
Top

I think 4 mana is a bit much. I'd make it 2 or even one, but make the counter creation into "Whenever a creature dies, you may tap Battlefield Scavenger. If you do, put a scavenege counter on Battlefield Scaveneger." (represents actually going to the corpse and scavenging)


I also really like Illusion of choice, it is very flavorful.
Top

Spell Scavenger BB
Creature - Human Scavenger
Whenever a instant or sorcery spell is put into the graveyard, you may tap Spell scavenger, if you do, put a scavenge counter on Spell Scavenger
(1)(T) Remove X scavenge counters from creatures you control: Target Instant or sorcery spell in your graveyard with converted mana cost of X or less gets Flashback untill end of turn (its flashback cost is its casting cost)
1/2

Another in the group of scavenger Tribe that i've been working on, this time though with a heavier drawback that doesn't make him too powerful if there is a counter war like there often is in vintage. In addition, I'm thinking that the scavengers can pool their resources to use to a common end, so Battlefield scavenger and spell scavenger could pool their resources together to fuel their abilities.
When all else fails.... use duck tape

On Pack Mule... instant speed equip without a cost is just insane. I realize you need to pay to equip it to the Mule, but there's no reason not to do so, then you get ridiculous threat of activation.

I think you could say 'Equipment attached to Pack Mule can have their Equip abilities activated whenever you could cast an instant' and it would still be very strong.

The anti-flavor bit, is that it's actually _equipped_ to the Pack Mule. Maybe exiling the equipment and having a linked ability that allows you to equip at instant speed? (I would still recommend a cost here - especially as exile would prevent interaction with the equipment until it's back in play.)

I'm not a fan of Illusion of Choice. It's aptly named, but a false choice is rarely something I want to see in a game, and it feels even worse in a game with a strategic focus. It creates too many decision trees with minimal gain.
Top

the 3rd Scavenger in the scavenger tribe, This guy helps ramp you into some BIG STUFF if you combine him with the rest of his tribe.
When all else fails.... use duck tape Let's take a not too ridiculous scenario. You somehow got two creature cards into your graveyard, and you have one creature as you start turn three. (Satyr Wayfinder comes to mind, as something that wasn't by any means broken in a recent standard format.)

You play out your third land, and then play Sinister Pathkeeper. You sacrifice the other creature (SW), adding 3xB to your mana pool. Spend 2xB to play two one drops and sacrifice them, and we have added 4xB and 5xB, leaving us at 10xB mana. Now cast a turn three Ulamog, exiling your opponents lands (all of them if you were on the play).

It doesn't matter that you are now at 7 life, because your opponent is now on a three turn clock - assuming they can get enough chump blockers out to keep Ulamog from ever hitting them. This is not a far fetched scenario, and while I used Ulamog and Satyr Wayfinder as example cards, this example was just to show how powerful 'free' mana is; the cards in question aren't unique, you just need a way of getting an initial creature or two into your bin and a high power card. Add a creature with a mana cost of 0 into the mix (Ornithopter), and you have an even easier time managing this.

TL;DR: The card's current power level is enough that it would be relevant or even format warping in Modern, likely in Legacy and Vintage as well. And that's saying something.
Top

Hmm, yea, that does seem like a bit too much power. Any suggestions on what I could do to nerf him a little? "Activate this ability only once each turn", maybe?

Why not just make the Pathkeeper tap?
Top

*cough* I forgot to mention that making it tap would definitely help...

I'm not sure where it would stand then, but it would definitely be within the realm of discussion.
Top

I have been thinking about cards recently.

Bone Reanimation (1BB)
Enchantment
Whenever a non-token creature dies, you may pay B.
If you do, put a 2/1 black skeleton creature token
with Haste onto the Battlefield, it has "BB, sacrifice
this creature and a Flesh-Golem creature you control:
Put a 3/3 black Zombie creature token onto the battlefield"

Flesh Reanimation (1BB)
Enchantment
Whenever a non-token creature dies, you may pay B.
If you do, put a 1/2 black Flesh-Golem creature token
onto the Battlefield tapped, it has "BB, sacrifice
this creature and a Skeleton creature you control:
Put a 3/3 black Zombie creature token onto the battlefield"
Top

Making him tap is probably not a bad way to go. Saves some space on the card as well. Thanks for the input!

Wait wait wait, how are we saving space? We were mentioning _adding_ a tap cost, not removing any of the existing functionality.

If you're removing sacrificing a creature, it's going to just get silly again. (It would also be a color break.) Even requiring a sacrifice, it's still repeatable ramp; I'd need to think about it, but it's probably at most a bend with 'T, sac:'.
Top

Sorry if I was being unclear. I meant compared to "Activate this ability only once each turn", a tap symbol doesn't use a whole line of text.

Okay, that makes sense. I just wanted to make sure there wasn't a misunderstanding. ^^
Top

For the "* Reanimation" cards I really enjoy the concept of "Voltron-assemble" cards. Parts becoming a stronger whole. That said, as they are now I don't know how readily I, myself, would want to play them. I believe that it might lie in their extra mana cost for the ability. I feel like "BB, sac two creatures: get a 3/3" is probably not an even trade. I think just B would be better, but only because you're already losing two creatures. Also, you might consider changing "...sacrifice a Skeleton creature you control..." to something more specific unless you want it interpreted as being able to sacrifice a "Skeleton" type creature (not the token) which would retrigger the two Reanimators and give you two more creatures. Still I like the idea, in fact, I think you could push the 3/3 zombie to a 4/4 and it still be not overpowered.

Something I was considering recently: Mirage Lands

So I'm concerned about power level on these. Does adding two additional one-time mana sources for 0 really screw up stuff? I don't think it does, but right now I have everything come in tapped so that it's more difficult to do shenanigans where you can use the bonus mana to play an additional land significantly earlier than normal and combine with other mirage lands to make _more_ instantly usable mana. Also unsettled on having a subtype on the cards because fetchlands but I don't know.
Top

So I'm concerned about power level on these. Does adding two additional one-time mana sources for 0 really screw up stuff? I don't think it does, but right now I have everything come in tapped so that it's more difficult to do shenanigans where you can use the bonus mana to play an additional land significantly earlier than normal and combine with other mirage lands to make _more_ instantly usable mana. Also unsettled on having a subtype on the cards because fetchlands but I don't know.

I tried making a little kappa dude from Kamigawa past. They were extinct when we last visited there, and all that remained for us to see was a shell.