Finally getting around to posting this.


Made a pretty good mess of the draft this week. I spent most of it fighting over the good Abzan cards with a lot of folks in my pod, instead of moving into something else. Thought I had gotten better at not forcing colours, but still need to work on that it appears.

I didn't do well this time. Draft went ok, but just didn't get there.

Started in B/W warriors, was short on creatures and had to pick a Mardu Hordechief over a Rush of Battle (so anyone who was playing around it, I didn't have it). I did get 3 Kill Shot (played 2) and a Ride Down. 3 Ponyback's put me in Red.

Don't think I had the critical mass of aggression for Mardu.
"Why does Sonic chill like dawgs?" - Graham
"Causation. Still a leading cause of correlation"" - Oglaf

Felt the deck was better than 1-2, but I had some mulligan issues. Good games from everyone!
Top

Really good games too. I don't think anyone really got screwed out of a win. In fact, I don't think I lost a game that draft did I?

Edit: Also got to use an Abzan charm to draw two cards. That was odd.
Top

I kept forcing the white for Abzan when I should have switched into blue.

You guys drafting this Saturday? I might join you as it should be an hour earlier due to daylight savings.
Top

YEs the plan is to draft at the "same time" as normal, but as you said Europe and Aus will be an hour earlier because of the change in the US daylight savings times.
Beware Bering Crystal Bears, Bearing Crystals. (Especially if the crystals they are bearing are, themselves, Bering Crystal Bears.) -Old, Stupid Proverb

So, since the "Spooky Sealed" is going for a limited time, should we do that, or stick with normal KTK? I'm wondering how many people would be interested.

Hosk should make the final decision, of course, as he's the go-to guy for the Fan Draft.

My deck/pool was awful for this sealed. Went 1-2.
Click to Expand

Potential synergy, sure, but too hard for it to go off, and easily countered.

Oh well, it was mostly a fun experience. Nice to play with some older cards.
Top

Went 3-0 in the Fan Spooky Sealed pod with this:

MVPs:
Battle Screech, as anyone who played Vintage Masters could tell you.

Ashen Firebeast allowed me to savagely wipe ACOwen's board in his upkeep after my werewolf flipped and before his did. Brutal.

Commander Eesha was also fun. A 2/4 Pro-creatures is amazing, as it turns out.

Blood Feud is also super sweet. Making two of your opponents' creatures fight and kill each other is fun.

Fiend Hunter is still as great as you'd expect.
Top

Looking ahead, I'm assuming no Fan Draft on November 15 due to Desert Bus. Just to verify?

Why couldn't we fan draft then? I mean it's not hard to have at least the audio streaming behind MTGO if you want to tune in, and any auctions/donation drives can still be participated in. However I am aware there are many people .gif ing and recording the stream for youtube/torrent purposes.
Top

I'm not saying we couldn't. I'm merely assuming most will be busy and that the turn-out will be lower than usual. If there's at least 8, we've got a pod, though.

I mean, you show up, you join a draft, and at the absolute worst, you're drafting, right?
Top 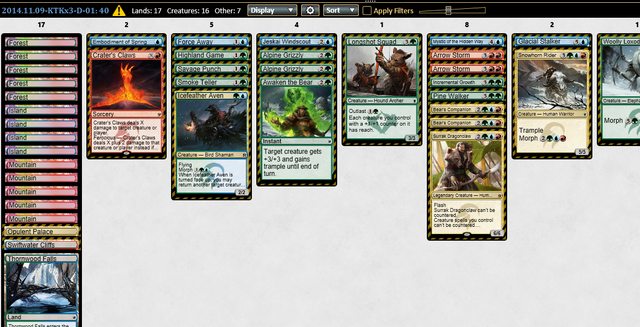 Weirdly I played two Temur mirror matches so there must have been loads going around.
Top

Wound up 1-2 this week, even though I felt better about this deck than in past weeks. Tried to stay fairly open during drafting, and waffled a bit between Jeskai and Temur before switching solidly to Temur towards the end of pack two.

Got run over by Wooglie, played a close game with Dix that almost ran to time (And lost game three by a sliver!), and then suddenly my deck worked and I won against Dougnap.


All told, enjoyed having a deck that I felt like I knew how to pilot, even if I did keep running into timely counterplay by my opponents. Thanks again for the games!
Top

As far as changing lands go, in deck building you can right click and save the deck before submitting. This will make it available in Freeform under the collection tab. You can then add whatever basic lands you have in your collection and then go back to deck building, right click and load the deck.
It didn't always work depending on the current update of the client, but I believe it's been working since KTK came out.
The foils I just found going cheap on a bot and I chose the ones I liked the look of that had enough of the same type.
Top

I was unable to deal with the disappointment that mtgo was dishing out to me with great decks and crushing draws, including a two land keep where I didnt draw another land for 10 turns, and game I had two juski assendency and three creatures down, my opponent was at 2 life with two creatures so any spell or any creature really would have won it for me, I drew 9 land in a row and lost so I opted out of the fan draft. I watched Dix.

When Dix was playing Maddrius, Maddrius cast dragongrip precombat, when he could have cast it with flash, if he would have flashed it in after blockers he likely could have saved big knucks and eaten dix creature. So after the game I popped over to let him know so he would remember next time.

If it helps, I promise not to mod you on my channel, Hosk.

It's OK, you've never had the sword in my eyes, Hosk. <3
While no one overhear you quickly tell me not cow cow.
but how about watch phone?
[he/him/his]
Top

(Seriously though, just let me know and like the lady in the lake, I shall take back the sword).


I do appreciate the feedback. I watched Dix's replay, and there were a number of things I could have done differently that game, so more notes for future games.

Although, judging by peoples reaction, I got more mileage out of that mindswipe play that I had expected, so overall I think things turned out ok.

@Wooglie: Cool, that's good to know. I liked seeing the different land, it just threw me a bit, especially since the mountains and forest weren't even from the same set.
Top

Week after next I'll be in Chicago, so unable to fandraft, and would like to know if anyone can do a minifandraft or other thing that friday (or earlier) so I don't miss out on my weekly magic.
Top

...and, I work this saturday :/. So the above applies to tomorrow as well.
Top

Any plans to do a Desert Bus fan draft today?
Top

I'm not in it, personally.