I would love to do a Fan Draft today, but I won't know until later if I can (Wife's Birthday). I know several people won't just because of DB (I mean that's fine

but I likes magic too)
Top

Went 1-2 this week with a deck I felt was pretty mediocre. Here it is. Could do some cool things, but mostly just got out-bigged too quickly.
Top

Went the ol' 1-2.
I think I got manascrewed a few too many times, but other than that I had some really good games.

And in round 3 I managed to beat a game with a 5 colour morph deck despite them having a Sarkhan and a Trail of Mystery out, which I consider a moral victory.

Anyhow this is my deck: http://i.imgur.com/WOm7qfF.jpg
I think it's pretty good.
Top

So I played Cube for the first time with 4 other fandrafters.

This was my deck:
http://i.imgur.com/pXycf4Y.jpg

Absolutely wrecked my opponents in round 1-2, but Hascow destroyed me in round 3. I made a lot of misplays. It was really really fun though, I encourage other fandrafters to try it.
Top

5 of us decided to cube after the fandraft. This was my deck. It was pretty silly. Went 3-0 and was super fun. I definitely think that we should do some fancubes, whether it's as our fandrafts, after, or some other time. Cube is great!
Top

Got in my second fan draft experience, and it was just as good as the first. I just need to be quicker on the trigger to get in that first queue.

Went 3-0 with this beauty. Would have loved a Secret Plans or Trail of Mystery to go with it. Only played one fan, as there were only three of us in the second queue. I found myself siding out a Scout the Borders in favor of a Temur Charm in every round.

I joined the gang for the post-KTK cube and picked these cards: http://imgur.com/VIL37ob

This deck went 2-1, losing to the aforementioned hascow. My deck was a little slow to handle the goblin assault, but beat a GB something deck and a mirror match. 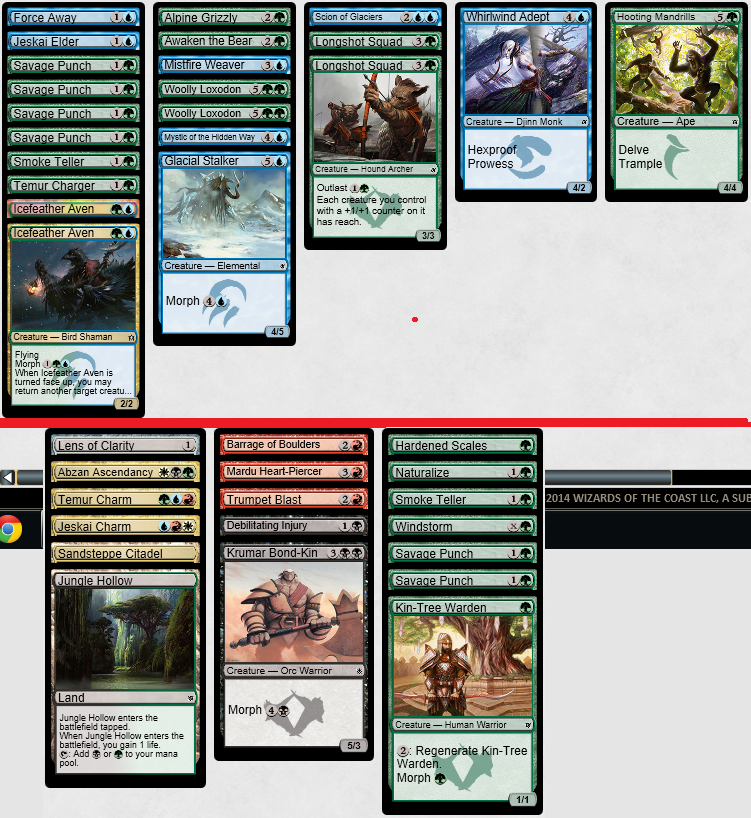 I haven't been able to play for a few weeks, so it felt really great to 3-0. My first few picks basically went Aven-Punch-Punch, so I got a bit lucky that Temur ended up super open. Most of the Snowhorn Riders came to me very late, and I didn't spend high picks on the Secret Plans, either.

I ended up siding out the Secret Plans in two of my matchups - Jeskai round one and Abzan round three offered much greater rewards for my more interactive cards (bounce was a blowout against prowess, outlast and combat tricks). I even sided in the Mardu Blazebringer against Jeakai since they seemed so creature-light. In the middle match against Sultai the Secret Plans were all-stars, however. I also found that the Embodiment and Banner went well with all the Mandrills.

Good times, all! Hope to be here next week!
Top

http://imgur.com/QtI6DGi
P1P1 Sorin, then Abzan Charm, thought I was going to be in Abzan, then pack 2 got passed Butcher followed my Mardu Roughrider. When I wasn't fighting my mana the deck played really well. The finals against Adi_pie was wild, barely managed to stay alive game 3, until I resolved every bomb in the deck and finally got there.
In this moment, I'm not a huge fan of whatthebus.
-Graham Stark
Top

My Mardu Warriors deck was in the zone of "Fun, but not strong enough to win"
I'm still going to claim I beat Adam, though.

I needed a bit more fixing (had to run the banner of all things), and the deck was inconsistent. No real removal made things tough, but I did get to turn three a Shambling attendant ...
Top

I don't have a photo from my deck on Saturday, but I went Sultai when Temur was open and did about as well as I could have expected to at 1-2. Picked up one piece of on-color fixing and opened two fetches so the mana was just busted all night.

How did the post-Khans cubing go?
Top

Had a nail biter of a match one, opponent went to less than a minute left I mulled to 4 game one and mulled to 3 game three.

Round two my opponent just plain got mana screwed.

It was pretty gross.
Top

Lost to Hascow in the finals with this deck. *grumblegrumbleSarkhangrumble*

We did a fun fancube after the Khans draft. I went 2-1 with this:

Reanimator/ramp/value is a fun deck, and Primeval Titan does some stupid things.
Top

Been awhile since I actually shared my FanDraft deck here. Almost exactly 3 months, in fact. Though, I've also only been in 4 or 5 FanDrafts since then.

I first picked Ghostfire Blade and tried to go for a morph theme. I think I mostly succeeded, though it didn't play out as well as I'd liked. Still went 2-1, so I can't really complain, but I only managed to use the blade for full effect a couple of times. Of course, then there was that time hascow stole it from me with that crazy morph creature. *Shakes fist* Darn kids stealing my invisible knives.
-Under Underscore Score (or just Underscore for short)

I... yeah. Somehow I punted a SICK mono-red gobbo burn deck to 1-2. I'm super salty after I had the win in hand R2G1 with opponent down at 2 and a Murderous Redcap in hand (for the shock and win) and I won game 2 so I technically should have been 2-0 at that point but I played the Chandra's Phoenix instead and... well.. yeah. I hosed myself. And then I ran into counter-burn in Round 3 and just tilted further as I just couldn't play anything. Oh well... it was super fun. 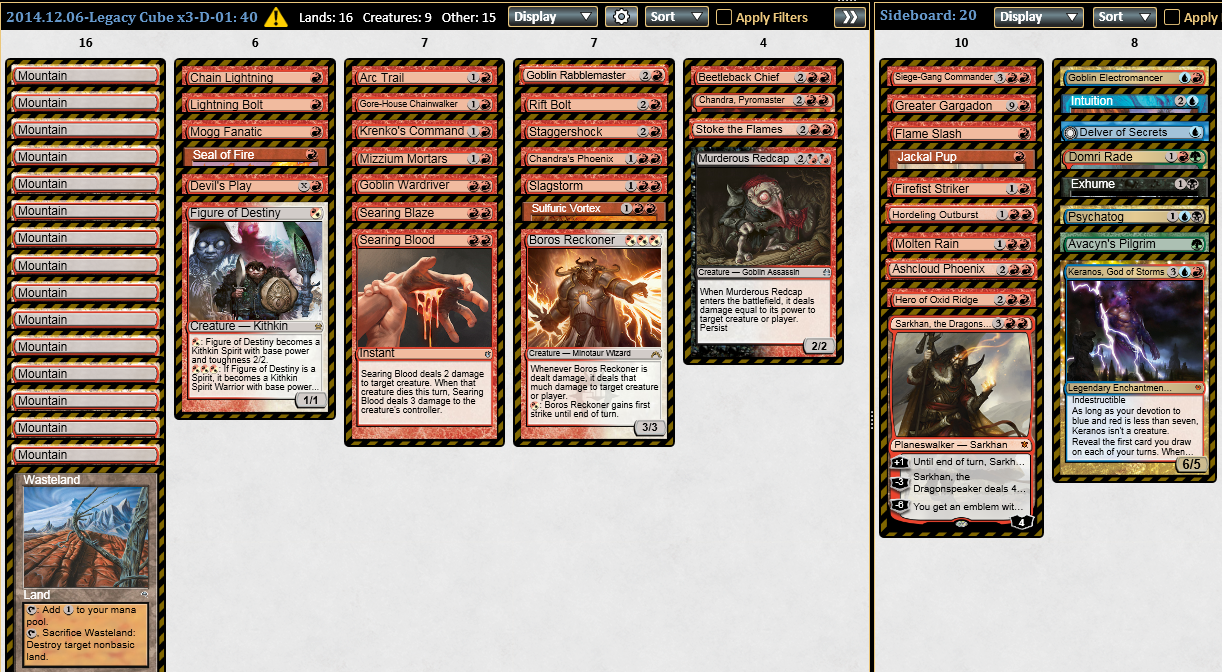 I also missed the fanpod in the draft and somehow ended up drafting Jeskai (AGAIN) and went 1-2. Ugh. I hate drafting Jeskai yet it keeps coming around to me. Go the bus away Jeskai. I don't like you anymore.
Desert Bus 1,2,3,4,5,6,and 9 Chat mod
Desert Bus 007 and 8 Onsite Chat Mod

I've just noticed that they've got replays working for drafts again, so I recorded a few games from the fan draft I won on the 9th November. 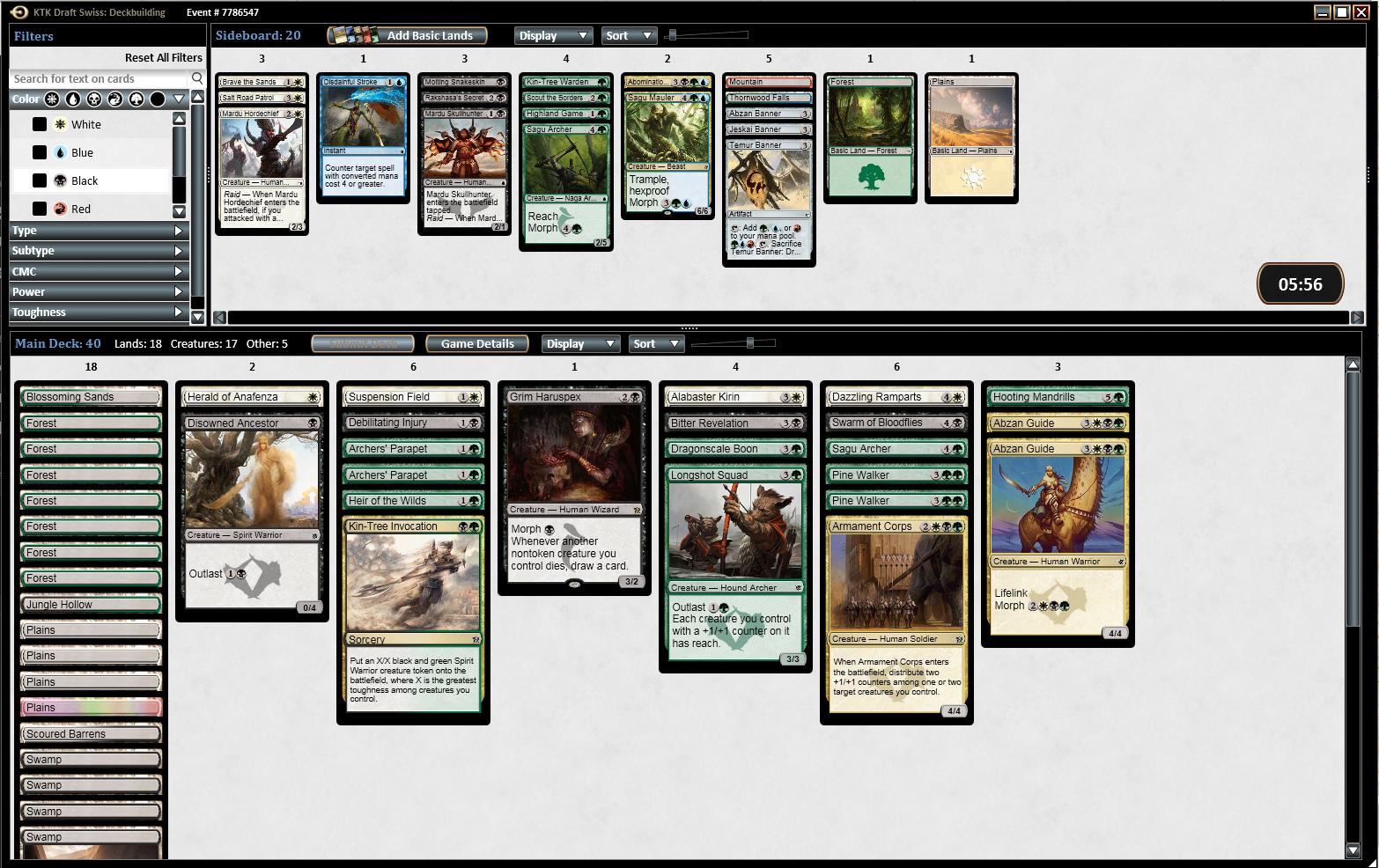 This deck was able to go in lots of different directions. It could grind it out with all the big butts, or it could hit an early kin-tree invocation off the big butts and then get silly.
Top


My Goblin-Mill Rush of Battle deck:

Wish I'd been recording/streaming this week, as all of my games were nail biters. Many thanks to my opponents for the great games! (Kidror, Notomtolose, Under_Score).

The deck was fun, but hard to pilot. Under_Score's bear force deck managed to out aggro me in games two and three of the finals.
Top

Here's my 3-0 deck from tonight. Had some pretty tough games, but managed to get through with some early damage, aggressive trading, and big creatures. After game one, I usually ended up siding in another island and my second Snowhorn Rider, since it was my only real evasion. It never seemed to be a bad decision, at any rate.
-Under Underscore Score (or just Underscore for short)

My daughter woke up crying and I was all distracted

OK the trouble with the FanDraft poll being started so early, having no "no-vote" option and being hyped so much is what you see here.

There are currently 60 votes. The largest gathering we have ever had was 22. Roughly 40 people have voted who wont be playing they either just picked something to see the results, or they picked what they want other people to play either way all these votes just throw the poll way off reality.
Beware Bering Crystal Bears, Bearing Crystals. (Especially if the crystals they are bearing are, themselves, Bering Crystal Bears.) -Old, Stupid Proverb