Maddrius I think your picks in pack two and three were fine (play style differences only) but Pack one, I would have loved to see you in White Black or Mardue it was wide open as you commented on a couple times. All in all welcome back.

:::::Everyone:::: We had 3 full pods plus 3 people that spilled over into a 4th pod, 27 people to play together and have fun, that was great!
Beware Bering Crystal Bears, Bearing Crystals. (Especially if the crystals they are bearing are, themselves, Bering Crystal Bears.) -Old, Stupid Proverb

My second round opponent had 4 Elite Scaleguards, which is even more surprising, since I also picked up one.

First time doing the fandraft last night and really quite enjoyed it, will hopefully be back next time! Went 2-1 with an okayish deck - feels like it needed more ways to win for sure. I'm impressed at how quickly we blitz getting all those pods together!

I also did a write-up of my draft here, that breaks down some of the matches. Includes me making my opponent drawing 9 cards. That is a thing that actually happened: https://sohnata.wordpress.com/2015/02/0 ... ic-online/
Top

I am SUPER hyped to fan draft tomorrow, but the crossing the streams fan drafts are always super light. Should we maybe do it tonight instead?
Top

Yes what is the schedule for the fan draft?
Top

I'd like to do a sealed today or tomorrow evening, to get my pool for the league. Is anyone else interested?
Top

I would love to do a sealed tomorrow, I will participate today if people are really into it but I prefer draft tonight for no other reason than to avoid confusion.
Beware Bering Crystal Bears, Bearing Crystals. (Especially if the crystals they are bearing are, themselves, Bering Crystal Bears.) -Old, Stupid Proverb

I'm happy to do it tomorrow and not pull people away from the fandraft. I'm just open to either day since I don't plan to do both a draft and sealed.

And yet with all that, I still managed to pull out the old 0-3. I shudder to think what would happen if this deck was wielded by someone competent.

At least the draft itself was easy - excellent R/W in pack one, Sarkhan in the second locked me into red beyond all doubt, and I managed to pick up some good black spells somewhere in the mix too.

Round 1 went pretty well, considering. Thanks again to Omnicrat for the entirely unnecessary (but much appreciated) concession of game 2, in which I drew 2 lands... in my opening hand. Didn't help much in the overall scheme of things though

I was constantly under the pump from Hascow's numerous critters for round 2, losing it straight 0-2. I did manage to whip out my sparkly new friend though... only to transform him, not bother attacking, and then swiftly got his face kicked in. Fun.

Round 3 (against someone I've now forgotten... I should *really* start writing these down. I'm so sorry) was slightly more drawn out, in that I managed an extremely cheap "death by arrow storm" to lock in a second game leveller. But justice was served in the 3rd, when I got out-Sarkhan'd

On the plus side, technically it didn't cost me anything thanks to a timely Ugin-ing last week. So, yeah.

Now the question remains: what to do with Mr. Dragonsm'n? He'd fetch a pretty penny on the open market, but unlike Ugin, I feel like I might eventually have a use for him in a potential dragon deck I've got brewing.

My deck for tonight is below (don't know why some of the cards are listed as not having them. It almost appears they became foil in my collection). First pick was arcbond, because I've heard it's a good card, but was having trouble understanding why. I went Mardu pretty early, solidified by getting Zurgo. Then I picked up flying crane technique and knew I had to splash for it. I streamed everything with my friends for fun, so I'll probably chop that up and post it tomorrow. Basically, Round 1 was won by arcbond, round two was lost due to some poor hands and a few misplays, and round 3 was won by flying crane technique.

http://imgur.com/a/9UlFn
-Under Underscore Score (or just Underscore for short)

Got my highlights from my stream last night sorted. It's a bit rough, and there's a lot I need to improve if I'm going to keep streaming. It's possible that it's just not worth streaming. I don't know if my computer will ever be able to do it without dropping all the frames. Anyways, just posting these here for people who can stomach them.

How is everyone likeing FKK so far?
Top

I like it a lot.
Though my decks have the nasty habit of never giving me my 1st pick rare in any actual game. So far, my experience has been, that jeskai may have gotten a whole lot stronger, but also a tad more finnicky.
Top

Blue in Kahns was a splash color In fate it is so strong that it reshapes the whole dynamic.

3-0 with this real sweet deck this week. Great finals with Adam, I just had the right answers at the right time.
Top

So I had a more in-depth run down of today's draft ready to go, but my computer had some sort of sidewalk slam brain freeze, and the word file got corrupted *shrug*. So this'll all be from shoddy memory 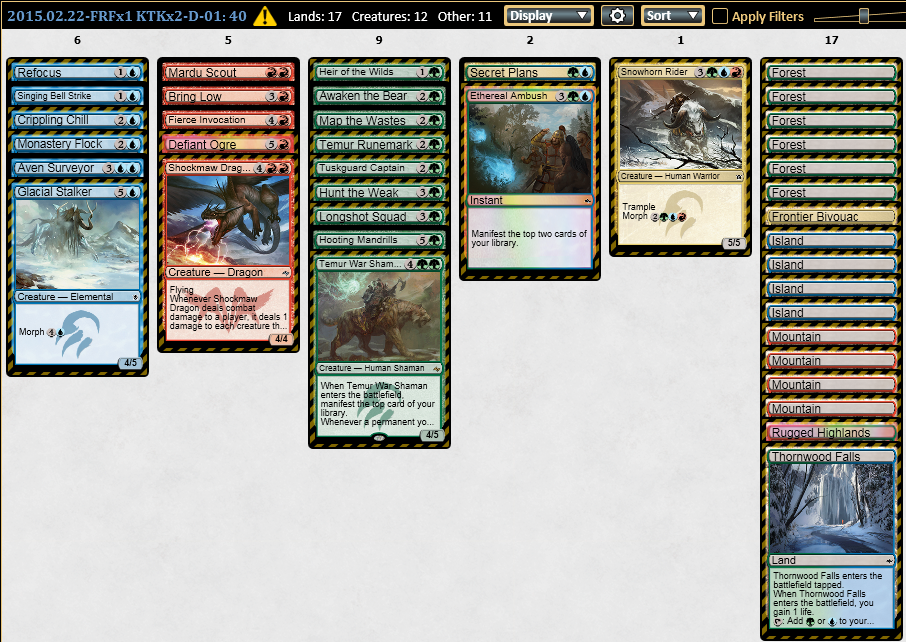 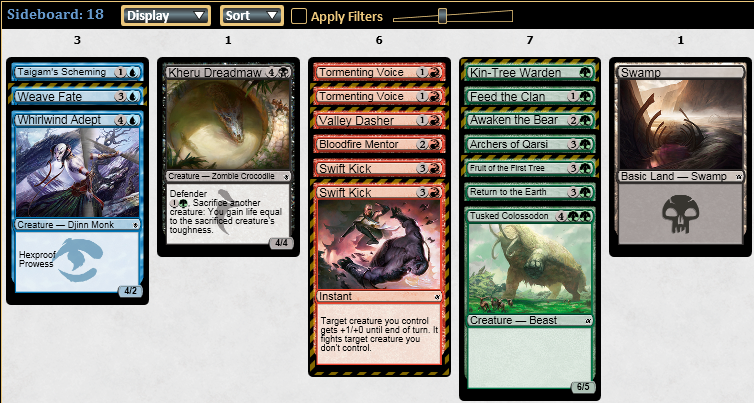 Drafting went super well for me - I started out with some strong green, and was able to back it up with decent R/U stuff in the KTK packs. I did pass a few "excellent" white and black cards in favour of merely "great" Temur cards though, so maybe not the best bet to focus so heavily. Oh well.

Round 1 against Hascow was over pretty quickly - I didn't draw much of anything playable in game 1, and while I put up a better fight in the second, I had no answer for the sustained aerial assault.

I did manage a first game victory over Wooglie in round 2, thanks to throwing pretty much all my chips in with glacial stalker, and a well timed "awaken the bear" to ensure the damage went through. But the next two games were much more one sided, and I ended up getting overrun with superior numbers.

To round things off, I got ground into a fine powder by Maddrius, who maintained a strong board in both our matches, ultimately outlasting my creatures for the wins.

I felt like I made some ok drafting decisions, but had to abandon my P1P1 colours towards the end of pack two, which made things awkward. Still, felt pretty ok about this deck:


Round one: Played two good, close games against Adam, before he pulled away and closed out a solid game two.

Round two: Got run over by Lord Hosk in game one. Kept a two lander in game two and never drew more land. Even if I had, his deck preformed pretty well.

Round three: Suddenly the deck sprang to life. Had a good back-and-forth with Omega in game one that I won, and after some exchanges in game two closed out with a bang. Good games though!
Top

Just to clarify, I want to know if I've gotten myself mixed up -- was the fan draft 30 minutes ago, or is it starting in 30 minutes? (Or neither?)
Top

Neither, it is in 2 hours 15 minutes from this post.


Its at 6pm Pacific time (moonbase time) which is I think 1 PM AEDT?

Oh, fair enough. I'm pleased that I asked then. Would it be possible for you to update the post in the front page with that information?

I also noticed while going through the thread that on the front page you said to meet in Twitch chat, but in another post AdmiralMemo said you meet in a special LRR_Fan_Draft room? Could you clarify please?
Top

I just did that I think. Can you confirm that I got the time zone thing right based on 6PM PST?

Oh yeah we gather in : http://www.twitch.tv/lrr_fan_draft/chat

it has just been coasting for so long now that I haven't updated anything.


Also a note to everyone, please log into MTGO more than 5 minutes ahead of time, and confirm that you have your entry dont just assume.

The past 4 weeks one person or another has logged in in the last couple minutes and said, Im here wait for me to log in, or oh I thought I had packs but I dont wait for me.