I wasnt really paying attention in the first pack and then tried to really force things pack two.

Pack three I was so pissed that I hadnt been paying attention that I didnt pat attention.

Pack one I could have had 3 Grim Guardians a Pharika's Chosen and two Nyx Infusions and still gotten all the good green I took.

Pack two I should have switched into black but I got that skyguard pick three and just double down on white even though it wasnt there. I picked those two trompers over two sword-wise which was a mistake curve wise and because if I get the Lord down the tropers dont tap, which happened.

I got HORRIBLY Mana screwed in one game in all three matches but I really put myself on the back foot with bad picks in the draft. Black was flowing pretty good in pack two and three and I would have had a chance at it had I been paying attention in the draft.

Passing the master of waves was never a question for me that pack was very strong and the two tickets I would pull from the card wasnt worth it if it was three months ago and it was still a 9 ticket card I would have had to think about it.
Beware Bering Crystal Bears, Bearing Crystals. (Especially if the crystals they are bearing are, themselves, Bering Crystal Bears.) -Old, Stupid Proverb 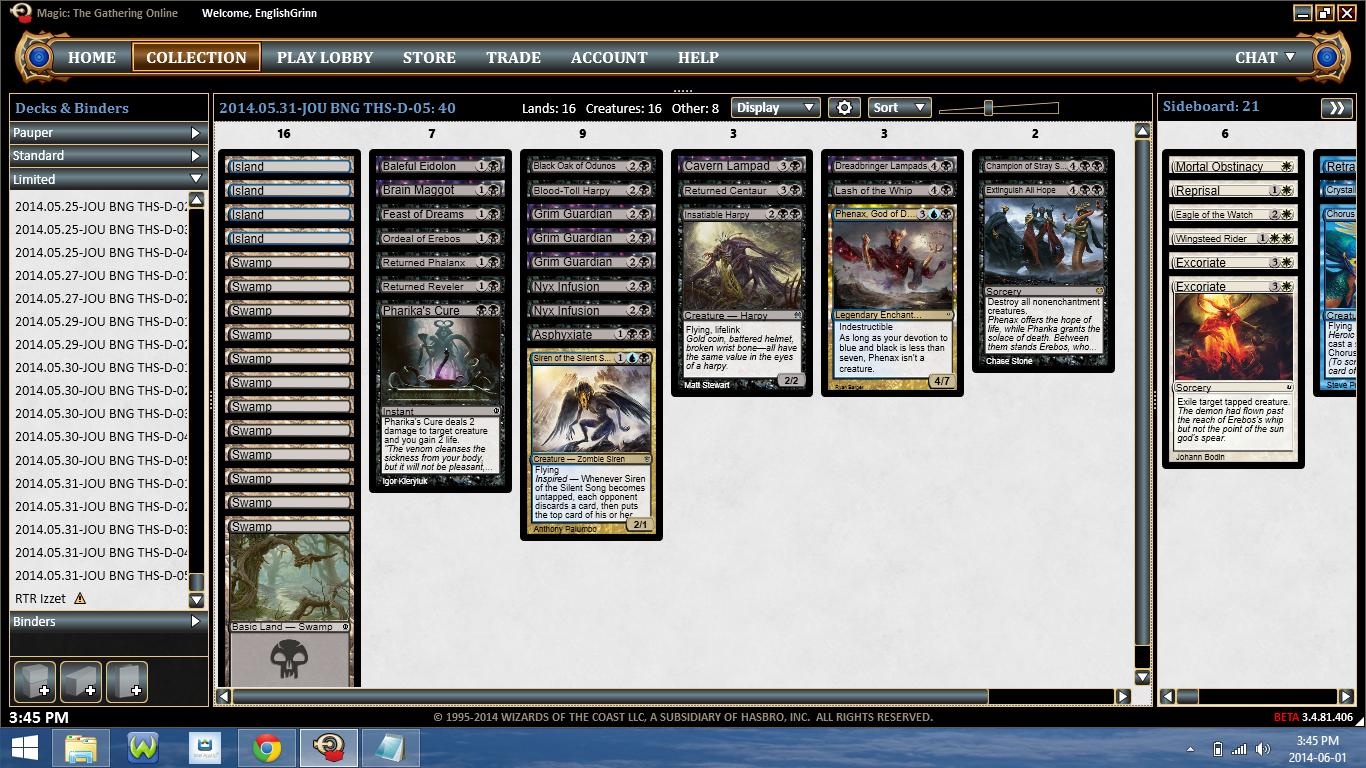 Since everyone else from my Pod was kind enough to give people a peek, I thought I'd do the same.

Basically I was monoblack constellation in Pack 1. I opened an Extinguish all hope and was continually passed Grim Guardians (the final deck had 3 I believe) so I figured I'd make my favourite deck archetype:
Attacking is for suckers.dek

The plan at the end of Pack 1 was to ping'em out with double or triple GG.

Now, someone will have to come forward, because my memory is hazy, but I swear I didn't open Phenax. I first picked Champion of Stray Souls I believe, with the "live the dream" of returning 3 Grim Guardians from my yard simultaneously. Phenax fit so well with the cards I had, I had to build around him. Pack 2 and 3 were spent building as defense a deck as I could muster.

Results, just 2 and 1, because Korvys basically steamrolled me in the finals. I had a lot of fun though and would love to do this again.
Top

Try this... its smaller

And will be streaming again, because that was fun!

My Geology exam?
Do a Pivot Table!

From the temple of LoadingReadyRun on the plain of moonbase, its Tap Tap Cast a bear!

We are sticking with:

If I get time on Saturday, in amongst all the Conspiracy events my LGS is running, then I'll look into whether it's feasible to do streaming from my computer (over my amazing Australian-quality Internet connection)... if it is, then I'll try streaming my draft on Sunday too. But no promises.
While no one overhear you quickly tell me not cow cow.
but how about watch phone?
[he/him/his]
Top

"Why does Sonic chill like dawgs?" - Graham
"Causation. Still a leading cause of correlation"" - Oglaf

At this point that is unavoidable. You have become my Nemesis that I am destined to fight. At least with Dix I feel I have a chance! :p

Will definitely be joining and streaming this again, had a lot of fun last time!

Goals for next stream:

Hey so... are we on? Or is everyone drafting Conspiracy at their LGS tonight? I myself am home sick, so I'm free...
Top

Hoping I can actually join this one, for real this time. Fingers crossed.
brb, assaulting children.
Top

So we had 20 people show up tonight, TWO pods fired in about 10 seconds, the 4 people left had to wait a couple minutes.

I didnt get in because of Mtgo silliness. Oh well, it sounded fun.

Well this deck looks amazing but did horrible! Got land screwed every single game! When it did work it worked amazingly well until I started drawing 7 or 8 lands in a row and lost.
Still had fun but wow! MTGO hates me for some reason! Went 1-2.
Click to Expand 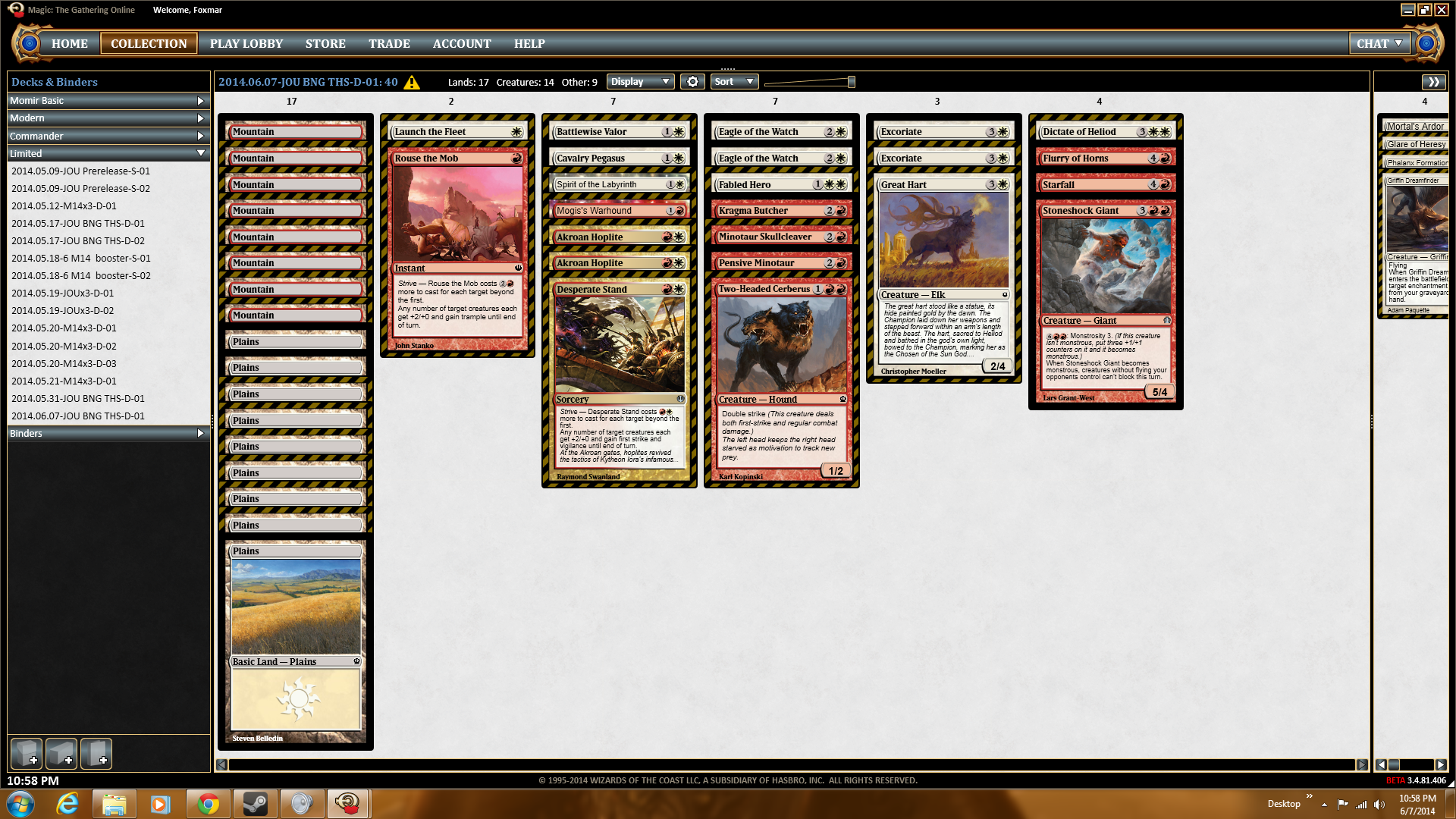 Woo made it to another fan draft

I see you like not running your P1P1 or your P2P1 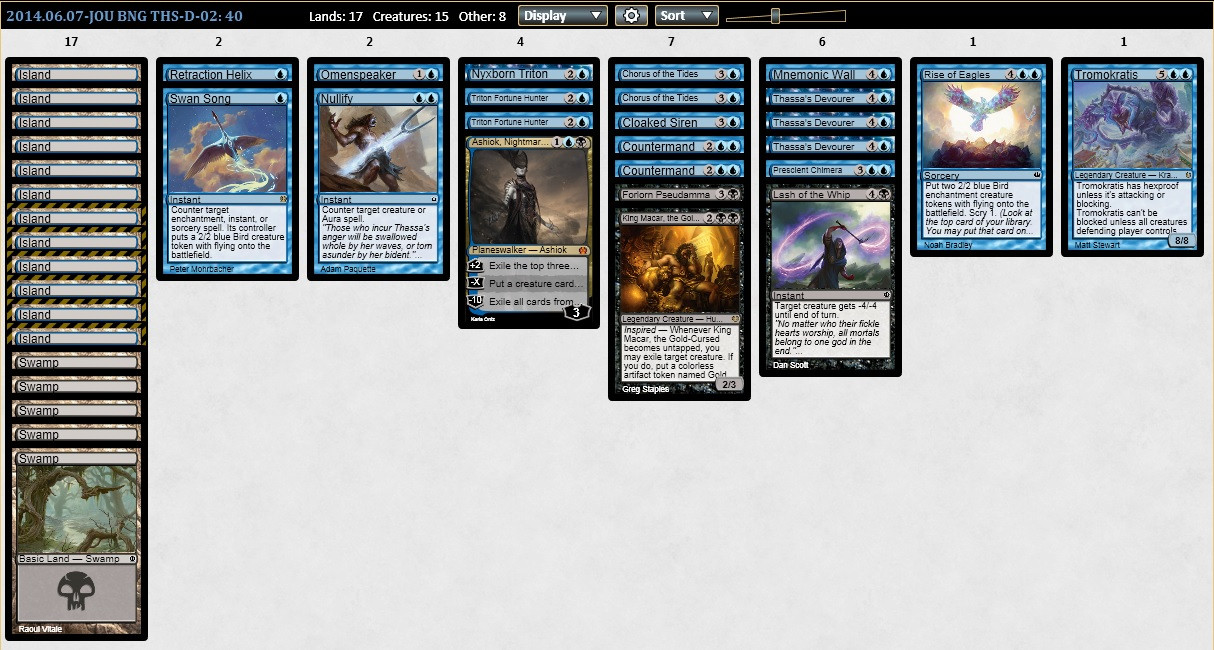 Suffice to say, I'm really suprised I piloted this as well as I did, 3-0 in my draft pod. Milled out Johnlocke once and mostly to Whatthebus. Some intense games. I had a blast!

Alright, went 2-1 with this stuff, losing in my first game against MowDownJoe. I resolved Perplexing Chimera once against CantWearHats, but never actually used its ability. Felt good though.
Click to Expand 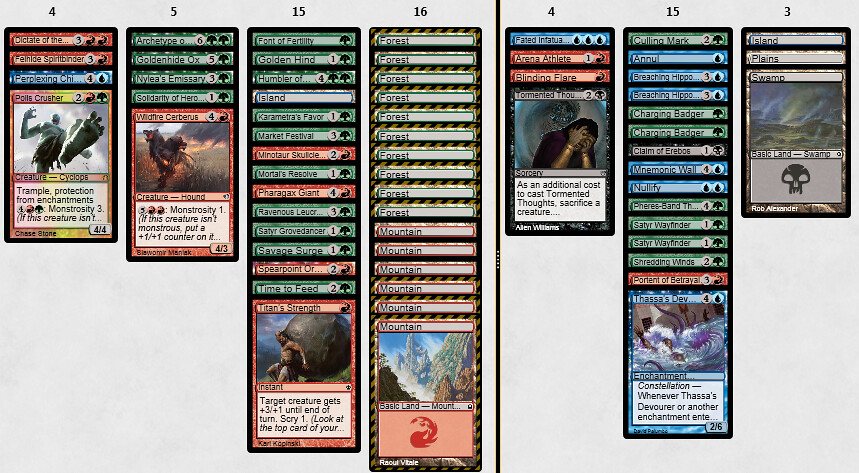 Do a Pivot Table!

Good lord at the pulls! O_O
After selling I made a grand total of 1 ticket off my deck.