Ok im officially updating the schedual. For the time being every week until things get rolling.

Ah well being in the middle sucks
All my current Commander Decks
I stream Magic http://www.twitch.tv/acowen Tune in for EDH Fun Times!

I'll be streaming my draft on my twitch channel this weekend: http://www.twitch.tv/dixonij

Edit that link, Dix. It's not correct.

Try this link for Dix on Twitch. http://www.twitch.tv/dixonij/profile

Will finally be able to join in on this tomorrow!


Dix, if you don't think it will distract, I may try to stream this as well. I can't promise to be entertaining, but it may give some more coverage of the action in the other pods.

(Figured I would ask first, as I don't want to be impolite. Still figuring this streaming thing out ...)
Top

It's gonna be a streaming throwdown!

I plan on ALSO streaming my shenanigans at my page over at http://www.twitch.tv/raymonong

Please don't ghost, although it probably wouldn't make too much difference with my amazing faildraft abilities!
Top

Accusations that I ghosted LRR have always amused me, as I've drafted maybe once where I had an internet connection good enough to draft and stream at the same time. That draft was a new player draft when I first started playing MTGO, I just so happened to do it at school.

So no worries about me ghosting, is what I'm trying to say.

Besides, what's the fun in that?
Do a Pivot Table!

Lord Hosk wrote:If you stream please remember to click the save stream button so we can all watch your victory later.

To be honest, you probably won't need to ghost my stream to defeat me. (As Karnasis notes, epic defeats are more likely).

But ghosting or not, please feel free to stop by and say hello! It will give me people to talk to between rounds. :- )


I will be streaming at:

See everyone in a few hours!
Top

I will also be streaming.

My deck this time: http://i.imgur.com/F5agiAj.jpg

Went 2-1. Was really weak to burn with all my 2 and 3-toughness guys.
Really should have grabbed more instant-speed pump spells but I didn't see many going around. Never got to cast Medomai, sadly

Went 1-2 and mainly lost due to everyone else having a million creatures with flying. Didn't draft removal highly enough I think. For some reason I didn't think I had enough creatures. Had some really good games though, happy with the deck overall.
Esper EDH deck w/ Oloro, Ageless Ascetic Ended up going G/W/r. My deck, for those interested. And the stream replay itself, for those curious in how I got to 3-0 my pod. (Edit: Or, if you prefer the YouTube truncated version, here you go.) Applause to my R2 and R3 opponents. You had really solid decks.
Last edited by MowDownJoe on 02 Jun 2014, 04:24, edited 2 times in total.

Well I went 2-1. Won round 1 to time out, lost round 2 to simply not drawing anything and won round 3 thanks to Daxos splash!

Half of the cards in my deck never showed up. Was really odd.

Foxmar, that was a great round three. Surprise Daxos did work!

Here's the replay from stream. Re-watching, turns out I made some questionable choices during draft ... oh well.


(AdmiralMemo: Thanks for stopping by in chat! Sorry I missed you).

Thanks again to Lord Hosk and Dixonij for organizing this ... will definitely be in for the next one!
Last edited by Maddrius on 31 May 2014, 22:12, edited 1 time in total.
Top

MTGO crashed for me right as the draft started, and I missed my first 4 picks. According to the guy to my left, I opened Athreos, which would have been nice... instead I auto-picked Triton Shorethief, then Hubris, Rollick of Abandon, and Akroan Mastiff.

Despite that shaky start, I end up in green-blue, the same colour combination I almost always end up in this block, and end up with a quite nice collection of cards, which takes me to 3-0.

So now I'm seeing if it's feasible to buy my paper Commander deck on mtgo so I can join in the after-party next time...
[edit] Nope, looks like my deck is pretty cheap for a commander deck (and half of that is the lands, and I could substitute cheaper lands), but still too expensive for me to justify buying a second copy of it online... Oh well.
While no one overhear you quickly tell me not cow cow.
but how about watch phone?
[he/him/his]
Top

Foxmar, that was a great round three. Surprise Daxos did work!

Here's the replay from stream. Re-watching, turns out I made some questionable choices during draft ... oh well.


(AdmiralMemo: Thanks for stopping by in chat! Sorry I missed you).

Thanks again to Lord Hosk and Dixonij for organizing this ... will definitely be in for the next one!

Round three was awesome!

Went 2-1 with my deck over all. Went primarily red heroic with a nice green splash and played against LRR fans.

Got second place in the after-draft Commander game. Think I punted that one, but I wasn't in the best situation even if I hadn't punted, so I guess that's ok.

I just ordered my irl Sphinx-eggedon Commander deck off of MtGO Academy (didn't order the dual-lands or the Sphinx's Revelation, so it's not going to be quite as powerful). Hope I can play some more Commander with LRRfans in future.
Do a Pivot Table!

Um yeah... so I went 1-2 on the backs of TWO timing outs. Yeaaaaah... Less about that said the better. For those that want to watch my terribad time skills you can go here for it: http://www.twitch.tv/dixonij/b/534204877

And here's my pretty decent (could use more removal) green/blue deck: 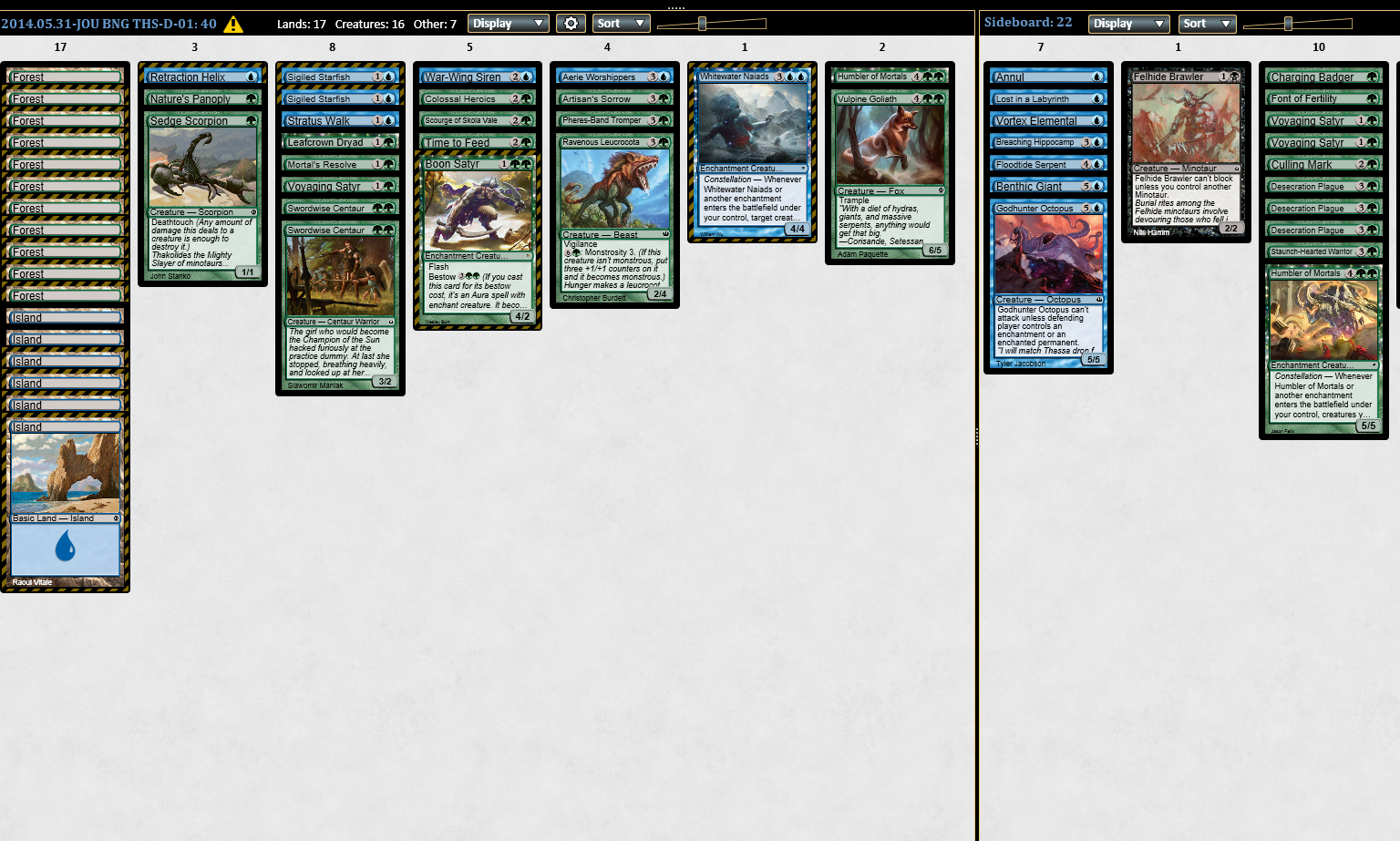 Got passed the Boon Satyr P3P3 which was a nice result from cutting off all green in pack 2.

I'm having a ton of fun playing with you all and drafting even if I was getting my sealegs streaming. (Note: doing your first ever stream draft WHILE drinking beers with ABV of 10.4% and 7% is not smart. Trust me on this.) Also I need to get my stops set up properly. Oh and not spam F2 so much. That said, I would have really liked to have seen what would have happened against Foxmar and Cantwearhats had I not timed out against them. I feel kinda guilty engaging 'THAT GUY' mode against Brolenar and pumpspelling two guys who were swinging in for lethal with no blockers anyway. I hope there's no hard feelings there as I was just in "aaw screw it... lets have some fun" mode there with it.

That said, my favorite play of the night came against cantwearhats. I had my War-Wing Siren swinging in for 1 and I played a Retraction Helix on it and CWH let it through thinking "okay... just triggering heroic I guess?" and right after that I throw Colossal Heroics on it to turn it from the 1/3 into a 5/7 that's untapped and after combat in 2nd main I use it to bounce his Skyspear Calvary back to his hand. Just the sequencing had me giggling. I also lucked out in game 2 against CWH to even get to game 3 to clock out against him. To be honest, in his position I might have made the same math error in assigning the blockers but still... such a fun few games of Magic.

Additional thoughts: Patrick Scryfish straight does WORK. If I am Ux I'm gonna snap up any of those I can in the JOU pack. Smoothed so many of my draws (though by the end I kept missing the scry on it...) it was perfect.

I really like red, though I've heard bad things about drafting it. You get some good stuff in pack 2, but not heaps in pack 3.

Lord Hosk passed me the Master of Waves, so I'm actually up on tickets after today.

Akroan Conscriptor didn't do that much directly, but things feel so much safer when you have one out and an instant trick in hand. There's almost no way for them to attack you well.

Oh, and Oracle's Insight wins games. It's like having Scryfish, but you drawing cards too, and it triggers heroic.
"Why does Sonic chill like dawgs?" - Graham
"Causation. Still a leading cause of correlation"" - Oglaf