Mill is so bad in my local EDH meta because everyone sticks an Eldrazi titan in their deck. Colorless, check. Big effect, check. Anti-mill, incidental check. I'm actually running a Stifle in my counterspell deck just to counter Eldrazi triggered abilities.
Formerly madAlric
All of the Crapshots in one place
Top 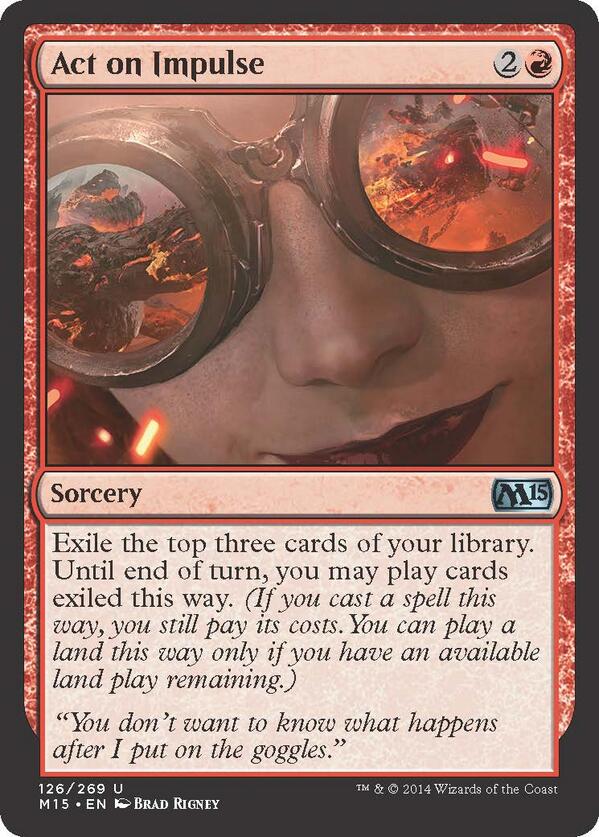 What is the purpose of the goggles?

(But seriously, this is pretty awesome. Modern Storm decks are probably creaming themselves.)

I guess they're welding goggles to help prevent her retinas from melting due to the close proximity with her own flames.
Top

Ooh, three mana draw 3. Granted, it's only ever draw three if you're being broken with it, like storm. In fair games, it's probsbly only ever a cantrip or draw 2. Although late game it looks like it can refuel fair red decks quite well, and losing extra lands isn't necessarily a bad thing, since that means you dug through that extra land.

Or you can play it turn 3 just to say that the goggles do nothing.
Top

Even if black doesn't have the most solid common/uncommon pool, I am still gonna roll black at one of the 3 prereleases I'm planning on going. I'm definitely gonna try for it with the first one at midnight prerelease before EVERYONE wises up on it (13th on signup list at my LGS) because I don't want it ending up like white was for Journey PR: White boxes are all gone by the 2nd and 3rd go around.
Desert Bus 1,2,3,4,5,6,and 9 Chat mod
Desert Bus 007 and 8 Onsite Chat Mod

Sure, go ahead. Make planeswalkers even better, like they weren't completely overpowered already :s (talking about The Chain Veil).
"I wouldn't call myself an evil genius. Simply genius will suffice."

Love the Chain Veil, super awesome marquee card, great flavor, feels like what it's been portrayed as. Very cool.
Top

I almost didn't notice Overwhelm - I thought it was Overrun at first. That one got pulled from my Thallid deck in favor of Overrun a loooong time ago. Adding Convoke is not nearly compensation for the loss of Trample, especially with the increased mana cost.
Top

The real problem with Overwhelm is every creature you tap is another one not attacking.
Look at the cards. LOOK AT THE CARDS!
The Saga of Ballchannels: My Dwarf Fortress Let's Play
Top

Mmmmm. That Kurkesh is automatically in my Bosh deck!

Just making sure, does activating The Chain Veil ability more than once allow an additional usage of planeswalker abilities like how additional land drops work? Or would a planeswalker using an activated ability fulfill the requirement of multiple resolved Veil abilities (or something like that), meaning you would need to activate the ability once between each planeswalker activation?

Though I guess with a new ability like this, I might as well wait for the release notes with the official ruling.
Top

As it's worded, The Chain Veil needs to be activated between each extra Planeswalker ability activation it grants. It doesn't add another activation that turn, it just resets whether or not the game says they've used an ability that turn.
Top

I just noticed that the tokens in the latest Arcana (http://magic.wizards.com/en/articles/archive/magic-2015-tokens-2014-07-02) now all have a "Token" supertype. That's... kind of interesting. I guess that'll be a new comp rules update.
Top

I'm guessing that's just to make it clear that these are tokens. Several cards called out tokens (Intangible Virtue, Illness in the Ranks).

They always were tokens, but now it says so explicitly on the token, which will help new players I expect.
"I wouldn't call myself an evil genius. Simply genius will suffice."

What I see not being said that should be is that the new token frame looks positively badass.
Formerly madAlric
All of the Crapshots in one place
Top

Hmm actually it's a super-type on the card as printed, isn't it? I'm loving the squid tokens, which I better be since I'm 100% making a Chasm Skulker deck
Look at the cards. LOOK AT THE CARDS!
The Saga of Ballchannels: My Dwarf Fortress Let's Play
Top

tamaness wrote:What I see not being said that should be is that the new token frame looks positively badass.

Utilitarian wrote:Hmm actually it's a super-type on the card as printed, isn't it? I'm loving the squid tokens, which I better be since I'm 100% making a Chasm Skulker deck

I don't think so. Not technically. Otherwise it seems like it'd be a copiable attribute of the card. And that shouldn't be true unless the rules are changing I believe.
Top

Ahh, I remember hearing something about how they were changing the template for when something is given various card stats, where in the case of LRR's spoiler card they actually spell out "base power and toughness" instead of just saying "is a 5/5" as usual. That gave me a smile.

Also I need that card and I want to make dumb decks with it so badly.
Top

I... This... and... the Scuttling Doom Engine and Chief Engineer already made me want to build some kind of Trading Post deck while it was legal in standard, and possibly try the Chief Engineer in Modern Tezzerator.

Damn. Maybe I'm being too impressed here, but I feel like this is easily the best card LRR has ever gotten as a spoiler. I mean... hell, Affinity wouldn't mind tossing this onto an ornithopter on turn 2 and swinging in for 5 with it either.

But that Darksteel Citadel interaction... wow.

With a turn one mana rock (in older formats) or some kind of fast mana in hand, you can even swing with it on turn 2, provided you played the Citadel turn 1. That's insane.

EDIT: And Ornithopter is in M15, thanks to the website leak of the clash pack (which has since been fixed, but I saw the lists)

So, we have multiple cheap artifacts that can be insane with this in standard. This card will definitely make the cut in standard, unless Khans has absolutely zero artifact support, and a bunch of hate. Honestly, I think it makes the cut in Modern, easily.
Top

Oh, my ever-growing ideas for my Memnarch EDH deck is growing more and more with every day that passes with M15.

I'm just imagining someone getting out something like a Blightsteel Colossus and then their opponent enchanting it with Ensoul Artifact.

For positive combos, Ensouling a Pillar of War seems like good plan.

I don't think enchanting equipment with Ensoul Artifact will allow the equipment to give itself whatever abilities it would normally grant, since it's not in any way equipping a creature. Indestructible and "creatures you control get _____" might be the best you can get with most non-creature artifacts if you're looking for stuff that's relevant for creatures.
Top

In limited. IN LIMITED. I see these both being pretty low picks in limited too, especially Citadel if you're not on the Ensoul plan. It'll be hard, if not impossible for most, for an opponent to recover from that in limited.

That'd still be pretty dumb. You used a card to make your opponent's Wurmcoil get -1/-1. The fact it still has deathtouch means it still trades with your stuff too. Blightsteel is better, but it still is a giant pain due to being indestructible with trample and infect. But it's a much more manageable pain.
Top
Post Reply
185 posts