A place to talk about standard, casual, limited and everything in between.
Post Reply
13 posts • Page 1 of 1

I have been very disappointed, not in the game itself which plays quite smoothly but I frequently lose connection to their servers which means I cant advance the story mode and also lose the progress I made.

Similar to LRR's experience playing the first Kideon quest over and over I have had to play his second quest twice, third twice and fourth three times because it was connected when I started the match but lost connection during it.
Beware Bering Crystal Bears, Bearing Crystals. (Especially if the crystals they are bearing are, themselves, Bering Crystal Bears.) -Old, Stupid Proverb

The disconnections only affected me once, but I get severe performance issues when I'm a match. As far as I know, I meet all the requirements, so I'm not sure what's going on. I do know, though, that it's very difficult to pause the timer (or according to my phone's autocorrect, praise the tiger) in time to do anything as a reaction.
Top

I've been able to find certain pockets of time that work for me, at least.

@Atifexe: Are you using the Steam version? Because if you are, I think the options let you bind "Stop Timer" to a key (I use spacebar).

BTW, has anybody else experienced the opponent randomly discarding a card at the end of their turn? It's happened to me every so often against opponents with nearly empty hands and without having any way of discarding (I checked the board and graveyard just to make sure).
Top

I am, and even using spacebar doesn't always register on the first try.
Top

The game lacks polish and the disconnections usually signal logoff time to me.
Still I'm more stoked about it than I was with 2015 upon launch. The menus are much less aggravating!
In Brightest day, In blackest night
No evil shall escape my sight
let those.... ah hell you know the rest
Top

So... this just happened during the last mission in Liliana's story mode: 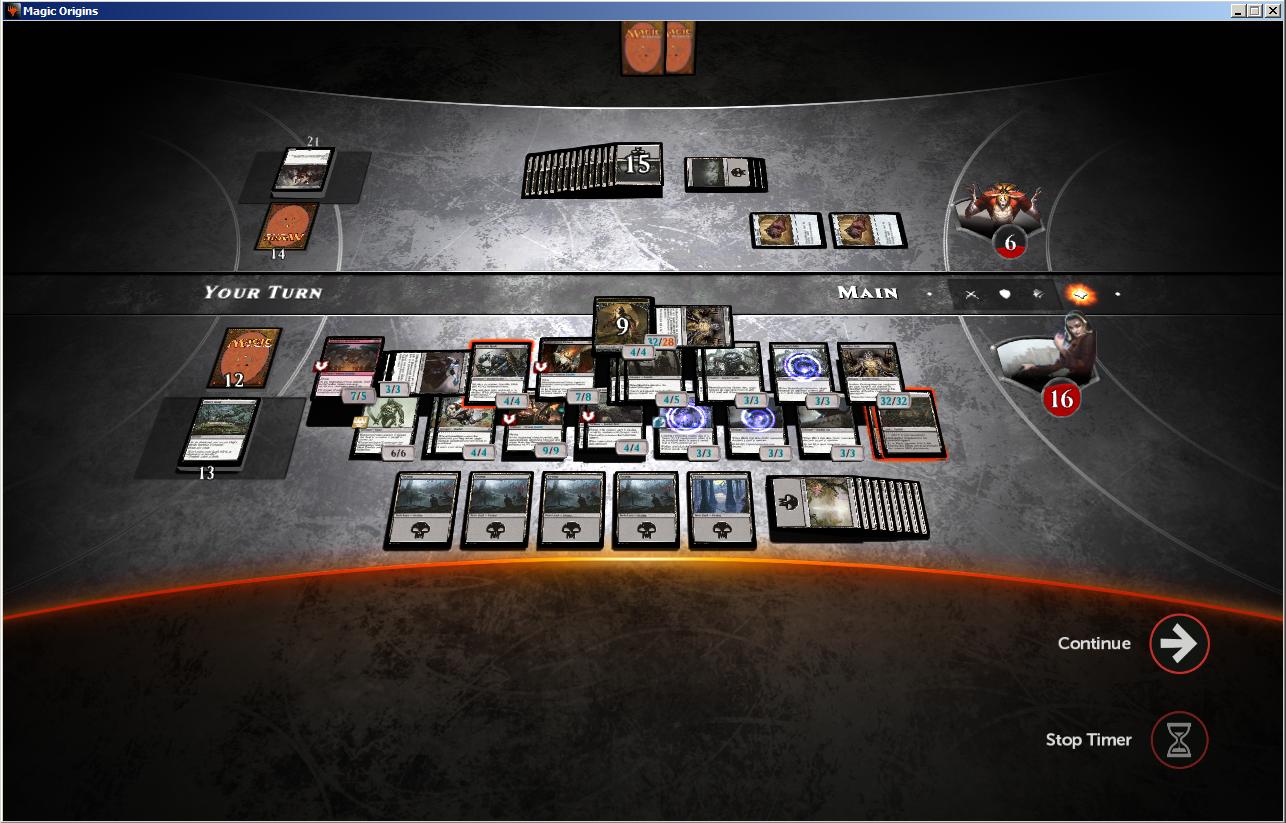 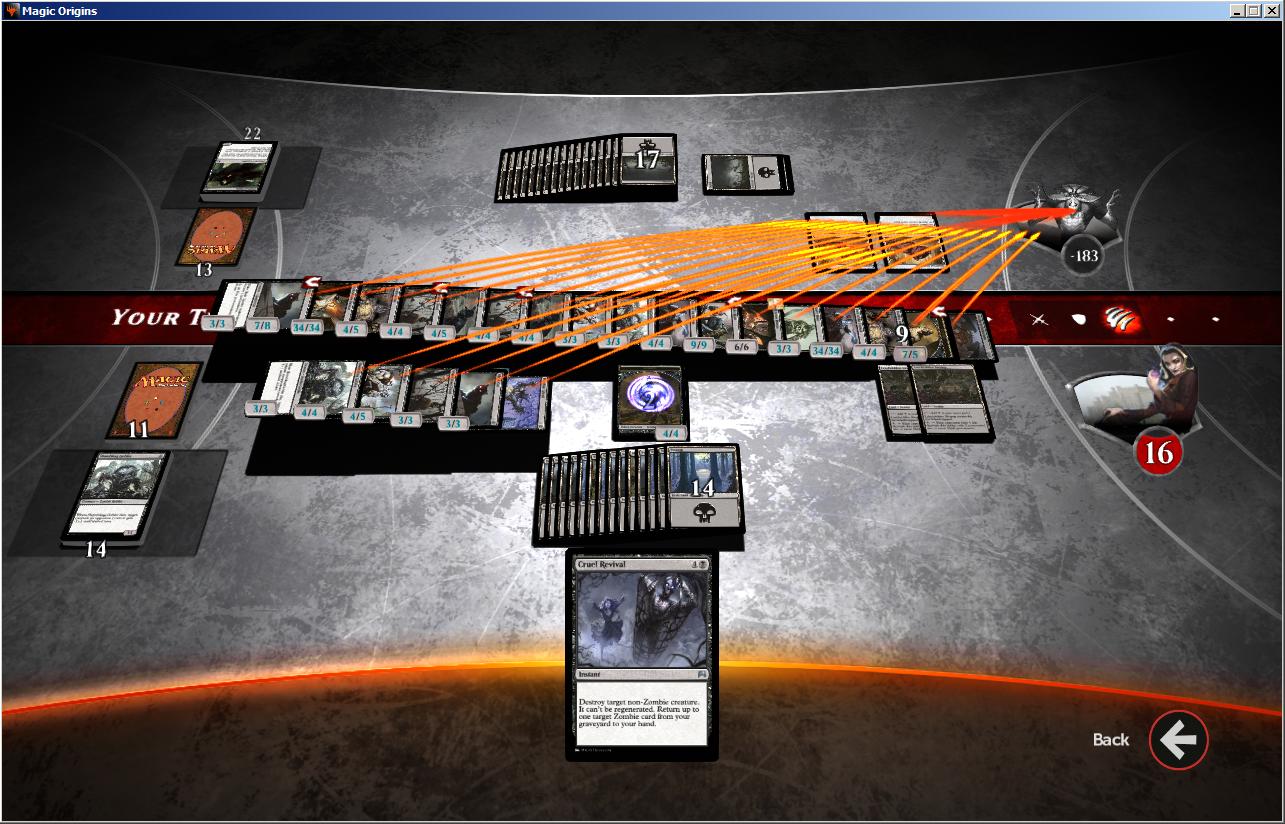 And it wasn't even *that* much damage, TBH... Had I bothered to dredge through the last dozen cards or so, that number coulda gone into the 200s, easy

I felt the Lilly missions got easier from start to finish. I failed the first one twice from bad draws, had a little trouble but won the second one, and then just rolled through three four and five.

Oh, absolutely. I mean, the game is supposed to give you "better" cards as the stories go on, but some of Gideon's and maybe Jace's deck changes were a mixed bag at best. Meanwhile, Liliana not only gets cards that are "very good" to "excellent" with very few downsides, but they all play into her utterly cuckoo bananas graveyard combo-ing.

The raven man keapt kicking my arse.
Liliana's campaign is subject to variance a lot of the time. You either SUPER WIN or you never stand a chance. Even Versus Grizzlebrand he just sometimes Crushes me or I steamroll him. There is never an in-between.

Nothing compares to Nissa's deck. I don't know the decklist but it has to be lacking lands. I feel like I am always mana screwed.... in a green deck...
In Brightest day, In blackest night
No evil shall escape my sight
let those.... ah hell you know the rest
Top

This is the first time I've played one of the duels, and I have to say I'm enjoying it. I'm not having as much of a problem with connectivity as everyone else so I managed to beat the story in a few hours spaced over Thursday and Friday. The one gripe about it I have so far is that once you beat story mode, you don't get the cards you've just played with. It feels pointless not to. It means you don't get to play with nowhere near as many cool stuff once you're building your own decks.

I'd also say, G/B Elves seems pretty strong. I've one most of the games I've played with them accept for when the AI pulls out 3 mythics in one deck (Kideon, Jace and Archangel of Tithes, which the Ai is very fond of). I've also had some fortunate early pulls (Woodland Bellower, Nissa and Kothophed), which makes playing against the AI a bit better dued to a lack of cheap creatures in green, as well as ramp actually. I wish there was a bigger starting pool that what you get, but oh well.
Top

I am still stuck with Gideon's story, since the game refuses to recognize that I beat Erebos's Titan and let me move on to the next story. It's a rather poor launch, but it's free and I am patient.
Stuff I do: Satan's God - A Webcomic | Fiend Wisps - My art | My photography
Top

Phi wrote:I am still stuck with Gideon's story, since the game refuses to recognize that I beat Erebos's Titan and let me move on to the next story. It's a rather poor launch, but it's free and I am patient.

Phi wrote:I am still stuck with Gideon's story, since the game refuses to recognize that I beat Erebos's Titan and let me move on to the next story. It's a rather poor launch, but it's free and I am patient.

As well as open packs, build a deck, and play through an AI match.

Honestly, I downloaded it today. Beat story mode. Deleted it. Playing through was really annoying at first, as there wasn't any real way (that I saw) to skip the tutorial. I was lucky enough to not run into any disconnect issue.

But I felt like the game really was more 'does the AI allow you to win?' The games I lost felt like they were impossible for me to win, often due to flood over being overwhelmed early on. The games I won were often just slaughters. Even on levels that I'd had trouble with my first attempt.

The 'evolving deck' idea was kind of neat. Though how well the decks improved was very hit or miss. Lili felt like she got a bunch of good stuff. Jace felt like they tried to force him into mill (really shown by the last mission). Jace overall just felt like his deck was poorly matched against his opponents. The first mission was the hardest, because the opponent would normally just out-aggro me before I could actually do anything.

Overall, I found it disappointing. Between the weird coin system, the lack of 'puzzle' mode, and that kind of thing... well, you get what you pay for, I suppose. I'd still say it's worth playing, given it's free.
Top
Post Reply
13 posts • Page 1 of 1