I was bored, so I made a thing: 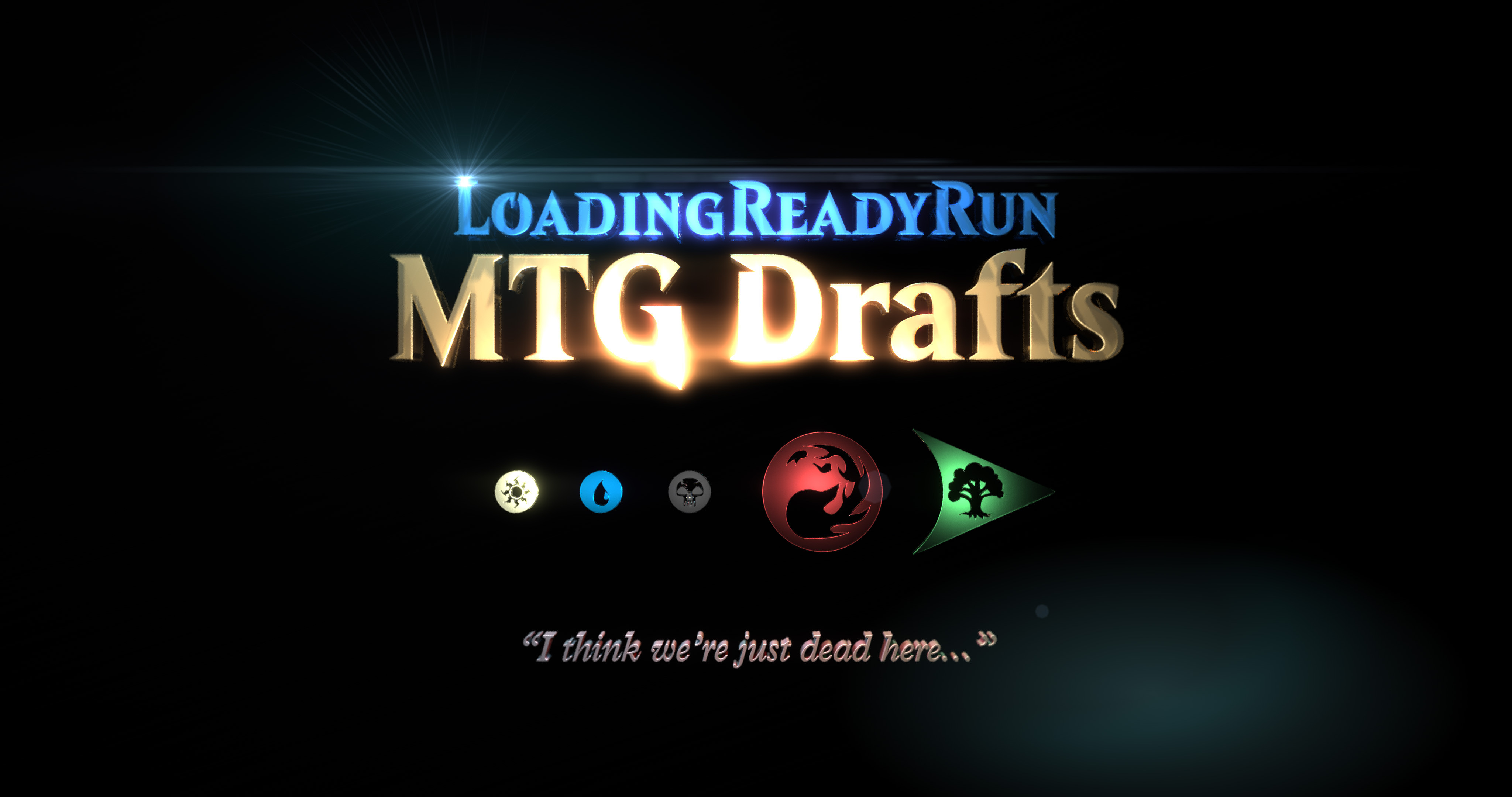 The use of the LRR logo there is pretty excellent. Great job!
Top

I made this back when they were using the old UI and their normal background disappeared.


Anyway, we need a Beej draft. I propose Graham and James allow Beej to draft the cards without any assistance. Then they come back for deck building and try not to cry.

My Tumblr - My LRR Gifs
Top

Well there certainly were a glut of giffable moments from last night's bonus LRRMtG that I missed because I was sleeping! I think it even gave me my new favourite LRRMtG gif:

(Or the more general version)

I made some things, thought I'd post them here.

I think one the highlights of Cam's draft last night was a pack coming to the last card and "They took the land and left the Fugitive Wizard." Such bile in that statement.
I'm not insane. I just have an overly vivid imagination!
Top

"Ok, so we need a one drop creature in blue for the core set."
"Cloudfin Raptor was good."
"We aren't bringing back Evolve for M15."
"How about that neosliver that gives flying?"
"Gotta be common."
"Alright, well we could reprint a 1/1 flier. Cloud Sprite can only block creatures with flying, which is a decent power level for a core set common."
"I like where your head's at. But can we make it shittier?"
"Uh...Fugitive Wizard is a vanilla 1/1."
"Ok. Just as long as we don't include any cards that interact with the Wizard subtype, we should be good."
Top

You guys could consider LPing Duels of the Planeswalkers some time to mix it up / surprise us.
Top

I have a challenge for a LRRMTG or a MTGO Academy video once KTK has been around for a couple weeks: The mono-color challenge. Pick one color at the start, force it, no gold allowed. There are enough mono-color cards to make it possible, but it'll be weird. Heck, it might actually be good because you won't have to worry about fixing and worry much less about mana screw.
When the upkeep takes longer than the main phase, I know I've done my job well.
Top

That seems really tough to do there are only 25 cards in each color and 5 are rare 1 mythic realistically leaving only 19 per "solid" color. They could do only single color cards but I dont think you could make a mono color.
Beware Bering Crystal Bears, Bearing Crystals. (Especially if the crystals they are bearing are, themselves, Bering Crystal Bears.) -Old, Stupid Proverb

It's only a little bit completely and utterly broken...
While no one overhear you quickly tell me not cow cow.
but how about watch phone?
[he/him/his]
Top

Typically a Sword would do something for each colour. This one seems to do 2 white things (makes a "soldier" and Silence).
"Why does Sonic chill like dawgs?" - Graham
"Causation. Still a leading cause of correlation"" - Oglaf

Can anyone watch the replay from last night? Seems a bit broken

Wooglie wrote:Can anyone watch the replay from last night? Seems a bit broken

Nope, once again Twitch broke the past recording for the stream, similar thing happened on James's recording last week. Hopefully someone will be able to find the correct URL for the stream so those that missed it can watch it.
Top

This seems to work. For those who didn't know, LRRbot keeps chat logs so you can watch the replays as if you were there.

Would you like to play along with last night's draft? Well, I was 3 seats over from Graham & James in that 8-4, so I can give you an opportunity to play along from my perspective. Woukd you have done the same as me? http://www.raredraft.com/watch?d=kdy39

For future ref, a quick guide for pronouncing Brisbane and Melbourne:

You will now no longer offend Aussies watching the stream. It's a really easy way to notice a tourist, because they try to pronounce things how they are spelt.
Top

Have visited Aussie-land when my sister studied abroad there. Can confirm that pronunciation guide.

Personally, I actually find it weird when someone who normally has a rhotic accent starts dropping Rs in placenames just because that's how the locals say it... so, like, even though I say it /mɛlbən/, I kinda expect someone with a rhotic accent to leave the R in, pronounce it /mɛlbərn/ (or possibly /mɛlbɚn/). To do otherwise feels less like you're copying the pronunciation and more like you're copying the accent.

Which isn't to say I find it, like, mocking, or anything... it just sounds a bit odd. I have no idea whether that's universal or just me.

That said, /mɛlbɔrn/ is right out.
While no one overhear you quickly tell me not cow cow.
but how about watch phone?
[he/him/his]
Top

In case you didn't know LRRMTG is happening tonight/this afternoon with the Legendary Cube Streamer Showdown. Not sure how this is working with DB prep going on, but it's listed on the streaming schedule. 1pm Pacific according to WotC.
http://magic.wizards.com/en/MTGO/articl ... 2015#item3
Top

I suppose PPR feedback ought to go here.

Been thinking about the matter of rules enforcement used in the PPR, and we're seeing a bit of conflict in thinking regarding how things should be enforced: the streamers are inclined to go super-casual, because hey, funsies and all, first time with the cards... and then every time someone makes a rules violation, chat (at least the newcomers we get in just for the PPR) screams, HOLLERS for a judge. Clearly, they'd like some level of enforcement, or at least, higher than was originally intended.

I don't imagine it's an entirely unreasonable request, actually. It may be a casual game, and it may be the first time with the cards outside of WotC... but *because* they're new cards being used in a game for the first time, it is probably a good idea to give an early indication of what you can and cannot do with a particular card. Like, 'here are some mistakes you might make when playing this card; don't be a dumbs like us'.

Obviously, no game loss penalties or anything. This is casual, after all. But given that people want to see what the cards can do in action, and given that everyone at the PPR table is going to be very experienced in playing Magic and can handle a talking-to from Serge, I think we can stand to let Serge be fairly active in stepping in and making clear what a card does and does not permit. There doesn't need to be any penalty more severe than just rolling back a play and doing it again properly when someone overplays a card, but knowing that they don't need to call JUDGE because Serge is probably already on it should go a long way to making the visiting chatters happier. (When someone underplays a card and doesn't take full advantage of it, that's just on them, but Serge could make a note of it after the game.)
Top

I'm not entirely sure what you think they should do differently, mtvcdm. It sounds like what you're describing is exactly what happens. If someone notices something is wrong (either chat, a player, or table fiend), then a judge comes over and fixes it as best he can. Chat freaking out is never not going to happen when a mistake is made. It's not like they've let things happen that shouldn't just because of the 'REL.' And despite being experienced players, people miss stuff.

The judge calls were handled fairly and well in my opinion, and Serge seemed to step in when he noticed something was wrong. Anything that was allowed (like the missed flip) was due to time being passed, and would likely have been the same at an actual prerelease event depending on the judge. I don't think there was any rulings that should have been different in a real event.

The only thing that could really 'improve' that would be to have Serge right there the entire time. And that seems like a bad idea to me. It means Serge is always just kind of sitting there doing nothing. He can't really be table fiend due to needing to focus on judging and not chatting/filling the air. And it'd give new players who might be watching an unrealistic expectation on what to expect. It's not often that you have a judge sitting there watching you play (though it does happen). Not to mention it'd likely be rough on Serge. Sitting there, focusing on the game, for 6+ hours, would be draining. As for underplaying a card, I could see that. Though I think that's more on the players mentioning than the judge himself.

Of course, if I misunderstood what you meant or there's another solution I'm missing, I apologize. I'm just not sure how they can really change it that much.


As for my own feedback, I thought everything went great. It was a huge improvement on the first one. Two pools built on screen was really nice. Having the deck techs and other player builds done the night before was a great way to help fill times between rounds. Same with having Serge's rules chat prerecorded. Plus, it felt like everyone was less on the spot, which was nice. The extra space, laid out deck, and deck lists were also really good. The only downside of decklists and the prerecorded aspect is if someone decides to change up their deck between matches. Which they can simply mention before the video shows if it's a big deal.
Top

Well, yeah, that's how things turned out. It just seemed to me watching it that all involved would rather have let things be more lax than they ended up being. Deck tech videos saying 'the stakes have never been lower', Serge stressing how casual the games were going to get called, just every impression that they didn't want to call for anything short of shooting a booster deck out of a potato gun at someone's head. But I recall chat being SO much in an uproar over one of the early misplays for SO long that Serge was pretty much forced to step in- the one where he had to roll things back a play or two- and then after that the calls came quicker and Serge was hovering more. I got the impression that the players had intended to just let it go, but they needed to call Serge just to get chat back on track and then went 'welp, guess this is how we're doing things now'.

How things ended up on the table is more or less how they ought to have ended up. We should probably just make that a little more explicit at the start of the day is all.
Top
Post Reply
56 posts