empath wrote:Now see, I'm of the opposite view - I have a sneaking suspicion (despite the axiom "Never attribute to malice what can adequately be explained by incompetence") that Air Control was DELIBERATELY LIKE THAT...maybe a 'parody' of buggy, poorly-thought out game design, or just a frickin' troll. In other words, it is SUPPOSED to be laughed at. There was a point - discovering all the wacky, 'broken', insane and genuinely 'wtf' things in the game.

On the other hand, The Hat Man was functional with regards to graphics and controls and u/i...but BARREN OF GAMEPLAY/STORY/etc. There was no POINT.

And the thing was, alex seemed to hate that MUCH MORE than Air Control - I guess in his view it's better to tell a story badly, then speak eloquently and have nothing to say

(*) Which is the first video that comes up when you search for prayer warriors on YouTube!
Top

(*) Which is the first video that comes up when you search for prayer warriors on YouTube!

Man, I thought everyone had seen that by now. Still the best thing to come out of the LRL streaming...a noble sacrifice by G, A & C.

I wonder if Prayer Warriors is the first result for everyone, or if that was just search personalization for people that watch LRR stuff already.
Top

I actually used Prayer Warriors to introduce a colleague to LRR.

I would like to say that I thought that the pairing of Graham and Alex as the hosts of this show worked really well together. I only saw the first two games as it was hella late here, but I thought that both fulfilled their annoyance quota in their own way to set Alex off on his hilarious meltdowns

The schedule is actually inaccurate - this week is going to be a Serge and Alex Let's Nope, I think Condemned is the game? Graham needs a little time to build up his library of awful games, would be my guess.
When the upkeep takes longer than the main phase, I know I've done my job well.
Top

I realise I've been lax in my post-stream forum GIF reports lately, so enjoy these at your pleasure!

New Watch + Play tonight! I am unreasonably excited to see what G and/or the combined traumas of the LRR fanbase have come up with.
When the upkeep takes longer than the main phase, I know I've done my job well.
Top

Please post all those great gifs and screenshots here.
Top

Fixed that for you.
Top

Well that was probably the best Watch and Play since the inaugural Prayer Warriors, totally worth staying up until stupid o'clock in the middle of a thunderstorm for.

Graham wrote:Please post all those great gifs and screenshots here.

That was more than I was expecting!

And the much requested "Citizen Graham"

...wait. If that's the case, then it would be possible for Alex to eventually tilt out to something that's 'petashit' or 'exashit' or 'zettashit'...or, dare I say it, 'YOTTASHIT'.

*begins to have hope for the future again*

ok, the first game was bad, just looked like it was a freshman game school project.

The second game made me want to puke while inside, then you went outside and I wanted to pee myself.

The third game made me want to find the creator and shake them... and say NO! THATS NOT HOW LIFE WORKS! NO NO NO! YOU ARE A BAD PERSON!
Beware Bering Crystal Bears, Bearing Crystals. (Especially if the crystals they are bearing are, themselves, Bering Crystal Bears.) -Old, Stupid Proverb

That first game reminded me of how far we've come in game design from the '2d side-scroller' (and let's be honest; Pitfall back in its 8-bit limitations was STILL better.


The second game had hints of promise; tiny glints of potential...buried under a hoard of clipping issues, mob generation mistakes, and an absolute absence of story or purpose. Remembering that this game seems to still be in Alpha development, there's a tiny bit of h-

nope; almost made it.

But let's be honest, none of those 'behind the scenes ' glitches (why the bleep is there all that extraneous map outside? Why the health pick-ups in an area that CANNOT be reached?) nor any of the modelling NIGHTMARES (dying mobs become sheets, and The Spider Faucet

) will ever be properly fixed. And as for the story? Remember that drivel Graham was quoting from the failed KS blurbs? Yeah, at BEST we'll have Yet Another Steve McGenericson cutting a swath through an endless horde of meaningless hostile things in order to avenge someone or something.

As I said, I had a tiny moment of hope in it: it seems that not only are mobs and weapon pickups static through respawn, but you seem to leave corpses behind from your previous deaths - that NBC+orange armor dude Alex found on the ground in a couple of occasions.

But that's not nearly enough to save it - hell, I've got a great sense of direction, but even *I* got almost instantly lost in that effing basement that was the first level!

This one had a fascinating story concept...but it completely failed to deliver on that. The game mechanics were - unlike the two previous games - completely functional, and the art direction, while rather drab and uninspiring, was serviceable.

But...this was an idea that easily could've fleshed out into a feature-length movie; sufficient exposition, more actual characterization, a real denouement and resolution instead of 'leaving us standing on the roof'...

I actually want to see the original idea by Bojan Brbora, which was probably JUST HIM ALONE; it likely was BETTER THAN THIS 'too many cooks make the broth really bland' (seriously, that 'conference room shot' of all the people grinning blandly at the camera really set off how much they watered everything down)...

No wonder the models looked dated!

Holy SHIT, WHY IS THIS BEING SOLD?!?


Come ON; I've disliked Jim Sterling (his 'public persona' has softened a lot over the years, thankfully) but I strongly agree with his review. I'm a little more forgiving than he is because of the value 4PM has...as a learning experience for the dev.

This is something that should be offered for free download and FEEDBACK, not SALE!!!

If it was free, and admitted to be the experiment it is, great - but as Jim's first commenter points out (and sadly Mr. Stirling himself failed to bring it up) the fact it's being SOLD creates an expectation that this project COMPLETELY FAILS TO FULFIL.


Okay, so instead of 'the good, the bad and the ugly' we've got "the silly, the horrific and the blah-yet-enraging"

I dunno, I thought it was entertaining in its own, particular way...

Drop the stupid Purple Prose back-story fluff, tune up the models a bit, and rebrand it as 'Invasion of the Taffy People'. ;P
LoadingReadyLIVE! on TV Tropes

Two pictures we all need to see:

The moment in which Alex has achieved Nirvana 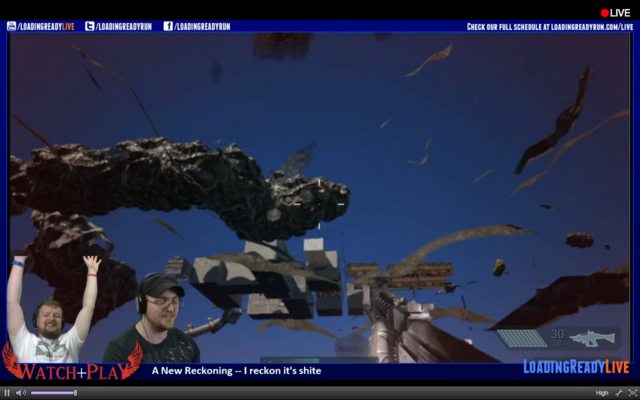 and a fuck of spiders 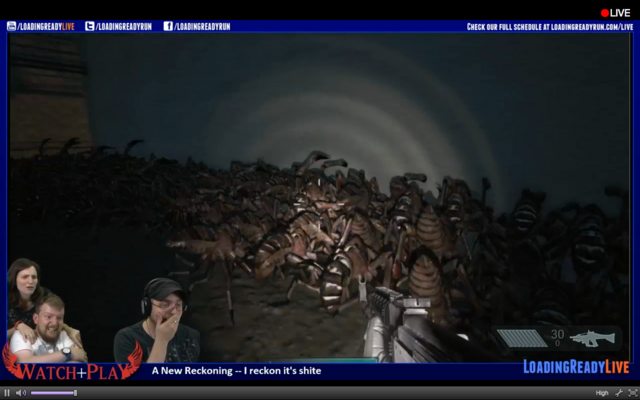 If the taffy-corpse effect had been intended I would've loved it. It would be a legitimately unsettling way for corpses to behave. But it so clearly wasn't...

Also, apparently A New Reckoning's serviceable parts were all taken directly from the engine's sample game, which explains why the maps were so bizarre: They took the sample maps and tried to put walls on them to block off parts, but didn't do it quite right.

Plus, yeah, that backstory. Unexplained terms all over the place, bizarre sentence construction, verbs running free from all rules of grammar...it was the sort of thing I dreamed up when I was 12. Not to say that villains who can move through time is a bad idea, but you need to do that right, which...yeah, nope.


As for 4PM...no. You don't get to have 9/10ths of the game be entirely plot-free and then finish it with an exposition dump. We don't know anyone involved, we've had no meaningful hints as to the truth, there's been nothing there to get us interested. No buildup, no character development, nothing. It's ridiculous. It's a shame, too, because the first minute or so was actually not at all bad. Then it just became terrible-horrible.
May those who accept their fate find happiness; Those who defy it, glory!
Top

Also, what kind of person repeatedly hooks up with someone when they are so black-out drunk they can't remember you?

Yeah, in the vein of "Gone Home" and other story games the idea of making Alcoholic Simulator is actually really solid. I think they could have saved it if either:

a) the plotline with James was telegraphed or explored before his massive infodump at the end. Drop some little hints in there, then explain what was going on right at the end. If necessary, add a flashback ("Would you kindly...")

b) you had the opportunity to be slightly less of a shitshow and get your act together, and that became the game. I suppose being compelled to drink works well for the plot, but you can make that compulsion something the player experiences instead of being "but thou must get pissed or the plot cannot continue."
Top

I think it comes down to the fact that if you want a plot or character arc, it needs to actually be an arc. You can't just have us meander through the game, then get to your meaningful conclusion. Because without the arc, it isn't meaningful. It's just badly written.
Top

And the whole "you killed your father in a car accident" thing. How would he even known about that?

Master Gunner wrote:Also, what kind of person repeatedly hooks up with someone when they are so black-out drunk they can't remember you?

I like to think that's the reason James' wife is divorcing him - not that he's been cheating on her, but he's been cheating on her WITH A LUSH THAT CAN'T EVEN REMEMBER HIM. Oh, and he's technically been raping Caroline since she's so far gone that her brain can't even assemble long-term memories - something tells me the courts would say that's "incapable of giving consent"...and HE'S BEEN DOING THIS FOR MONTHS

Master Gunner wrote:And the whole "you killed your father in a car accident" thing. How would he even known about that?

Well, there ARE the weird, vague 'driving' flashbacks, but nothing implies anything happening, nor that anyone else is present in the car, even.

Of course, if they'd plotted this out a little longer than 22 minutes, maybe they could foreshadow more than just the tip of Caroline's nose?