Hippocampal reminds me of some of those really surreal bits from near the end of 2001, except without all the characterization that made it actually meaningful.
It's all over but the crying. And the taxes.

"Perfectionism might look good in his shiny shoes, but he's kind of an asshole and no one invites him to their pool parties."
Top 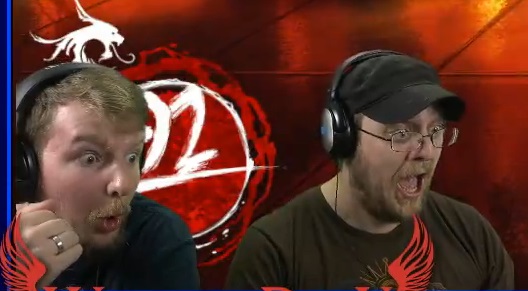 The moment they realized that yes, it's a fuppin' sweet katana.
Top

Sorry guys, I think I goofed a bit on submitting Unearthed to Watch n Play - I guess things I'd heard about it were a little exaggerated. I still think it was a pretty great watch though. Hopefully chat and A&G felt the same!

Also - if it were called Graham & Alex's Watch and Play, the acronym could be GAWP. Just saying.
Top

SohNata wrote:Sorry guys, I think I goofed a bit on submitting Unearthed to Watch n Play - I guess things I'd heard about it were a little exaggerated. I still think it was a pretty great watch though. Hopefully chat and A&G felt the same!

Also - if it were called Graham & Alex's Watch and Play, the acronym could be GAWP. Just saying.

I feel the game redeemed itself with the looping driving section near the end. That part was REALLY BAD

Is there a list somewhere of games that the LRR crew has for W&P purposes? Sending them something they already have is not a good plan.
Top

Well, all I can think of is to check this list before sending.

Or send an email to the WatchAndPlay email before gifting the game to ask.

SohNata wrote:Sorry guys, I think I goofed a bit on submitting Unearthed to Watch n Play - I guess things I'd heard about it were a little exaggerated. I still think it was a pretty great watch though. Hopefully chat and A&G felt the same!

Also - if it were called Graham & Alex's Watch and Play, the acronym could be GAWP. Just saying.


Also, I like the title-change suggestion, because often enough they DO gawp at the games they're playing.

empath wrote:...was a refreshing pick-me-up after the prolonged "WAT?" of that other game (whose name I forget, and DON'T WANT to remember.

empath wrote: so Unearthed (episode I) was a refreshing pick-me-up after the prolonged "WAT?" of that other game (whose name I forget, and DON'T WANT to remember.

I think pick-me-up games work best when the game itself is goofy, like Shadow Warrior or Goat Simulator. Unearthed felt more like it was actually just something Alex would play on his show normally. That said... the looping area and sudden end made up for that for me too. I don't think the looping would have been that bad if the driving section hadn't been needlessly long.
Top

Unearthed had... some flaws, but it was surprisingly competent. Like, it was clear they had some decent ideas and talent behind it for a tiny little studio, even if the final product isn't as mind-blowing as they had hoped. A lot of love went into that project, I'd say.

Hippocampal, though... okay, if I'm understanding that Gameplay screen right (which is a big "if"), I can see the concept. Or at least the genesis of it. Somebody must've been really, seriously annoyed at the more "arty" sorts of games ("contemplative", as they put it) that've come out in the past years, and they felt the need to lash out. Only they didn't quite get the idea of satire. Or holding interest. Or design. As in, I could see myself back in junior high thinking something like that was edgy, insulting, and stick-it-to-the-mannish, assuming I were angry enough at "contemplative" games horning in on "my" turf.

Which makes me glad it wasn't as easy to get into game development back when I was in junior high, but hey.

Of course, like I said, it was a big "if". If I didn't understand it right, well, then I don't have any damn clue.
Top

Well, the one problem with "Hippocampal" (glares unwelcomely at Dominic Appleguard) and it's claim of satirizing 'contempative' games, falls to ol' Poe's law:

Without a blatant display of humor, it is impossible to create a parody of extremism or fundamentalism that someone won't mistake for the real thing.

And as blatant as it was, it was STILL not sufficient to distinguish itself from GENUINE surrealist art.

Unearthed is a very interesting example of cultural reapropiation or something like that. This is a group of arabs, taking an occidental product (in which arabs tend to be the bad guys, btw) and making their own version. It has flaws of course, and it might not even be that good at giving a different point of view on the genre, but it's still at least a valuable effort.
Top

A small note to Alex & Graham - lost in the madness that was 'Zoo Race', I have to say 'The You Testament' was also hilarious. The guy has made a ton of other games, with incredible descriptions like this:

Having redefined genres for the past 5 years, the concept king turns his magic touch to soccer - and delivers the most character-driven interpretation of the sport seen yet! Leave the professional experience on the bench, and rediscover your roots playing real people with real stories. Create your own sporting saviour from scratch and embark on a campaign for world domination - sampling the culture of each continent and challenging their heroes. Match after match, you'll gain loyal followers and confront bitter rivals as you shimmy your way through a political minefield. But once that dream team has been formed, all that remains is to hit the pitch for the most dramatic sporting action on the planet! When you get back to basics and passion is all that matters, will your roots be strong enough?

In a bleak future where there are more criminals than citizens, one prison hopes to redress the balance with short doses of HARD time! Take your punishment like a man and try to endure the grueling regime of Southtown Correctional Facility. Create your own inmate from scratch and rub shoulders with up to 100 fellow convicts throughout the sprawling prison complex. With each passing day, every action taken and every word spoken will sculpt your own unique identity - as you attempt to juggle the physical and mental demands of prison life. You'll soon find that "reputation" is the only currency that matters in this world! Having one keeps you alive, but avoiding one keeps you sane. Which side of the fence will you fall on?

The last one was reviewed by Richard Cobbett here, for more info: http://www.pcgamer.com/saturday-crapshoot-hard-time/

(Incidentally, while the 'Saturday Crapshoot' series that's from wasn't always horrible games, if you're ever looking for W&P games, there's a rich vein to be mined there.)
Top

I want to say that I enjoyed the Let's Nope this past Friday, despite lack of spookiness or "horror" in my opinion.

So, on an unrelated note: maybe Graham and Alex could hide the games they use for Watch & Play after playing them. Y'know... for safety's sake.

MowDownJoe wrote:So, on an unrelated note: maybe Graham and Alex could hide the games they use for Watch & Play after playing them. Y'know... for safety's sake.

That poor man.
I'm not insane. I just have an overly vivid imagination!
Top

I guess that we'd throw "Alone in the Dark (2008)" in HERE for the closest match under Alex's streams...

...but a good point was raised; the game wasn't "so bad it was funny" (although it's kludges and sloppy controls and obtuse game mechanics seemed to hit Alex's sweet spot), it was more "playable, and promising at points, but bad enough for Kathleen and Alex to riff off it"

...which sounds a lot like another 'show' with other hosts...

But YEAH, that was bad enough to be funny, and the game itself has plenty of interesting ideas and potential...some of which ARE delivered on...

I would like to see them continue the game. It can only get better right?

Well, NO; it can ALWAYS get worse.

But yeah, this...this was actually pretty enjoyable; Kathleen and Alex work well together! And the game seemed to entertain (and give ideas to) both of them, so... *hope*

Just gonna go ahead and leave this thing here. I threw it together during tonight's Let's Nope. I find it amusing; I hope you do, too.

The illusion is flawless, Arclight.
Top

So i found this a while back and i know it isnt a game but it's a small video that i wish for alex to see so perhaps at the end of the stream or maybe inbetween games alex could watch this. i tried at desert bus but the challenges kept getting dumped before he could watch