You know, it took me until the constant time-skips with messing up the warehouse section to realize it, but either Ryo consistently cuts his face in the same spot shaving every single day, or that bandage is over some sort of horrifying unhealing sore.
He habitually wears an expression as if he had determined to drive his head through a brick wall, and was about to do it (Description of U.S. Grant) 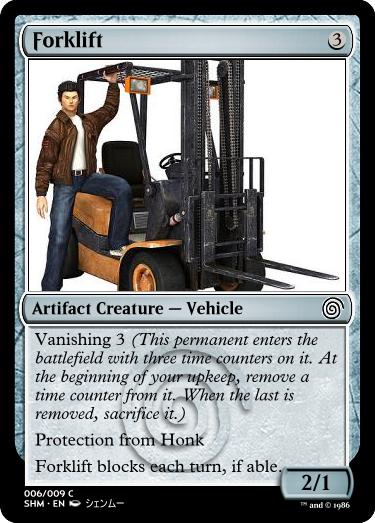 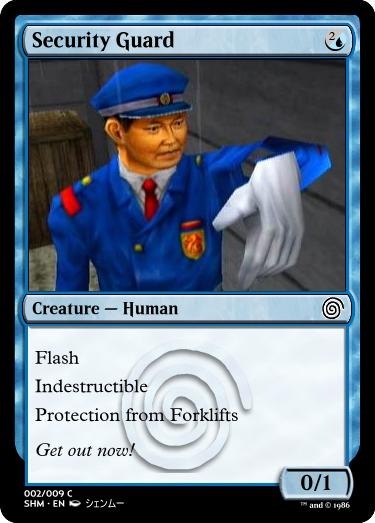 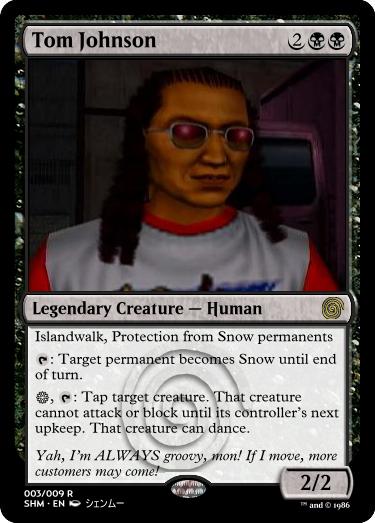 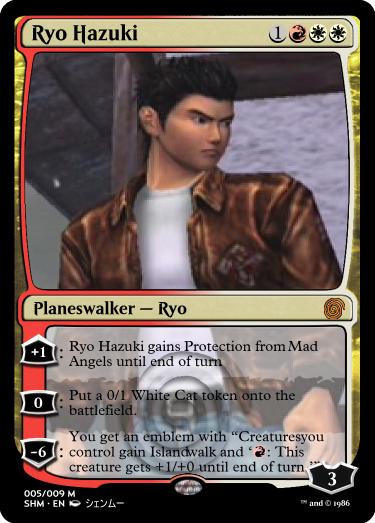 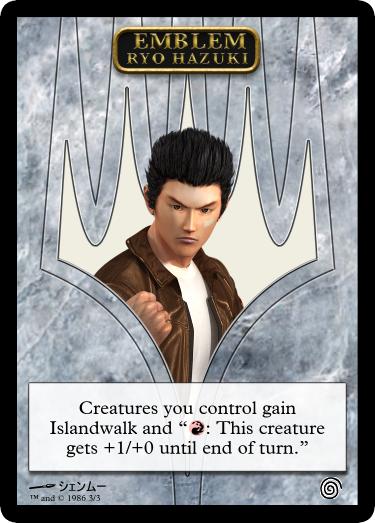 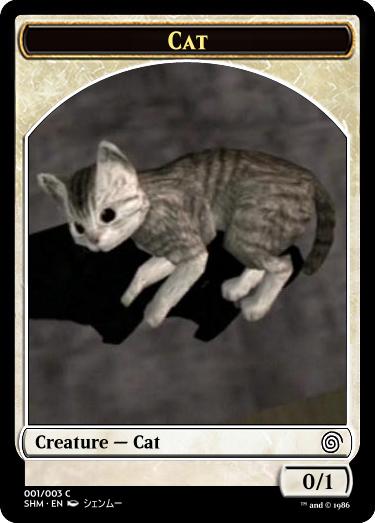 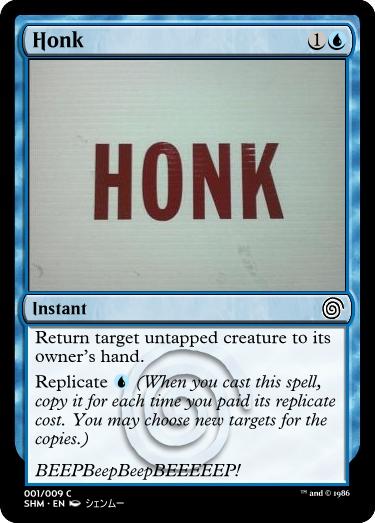 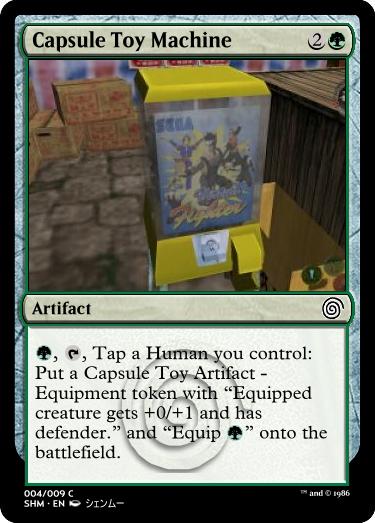 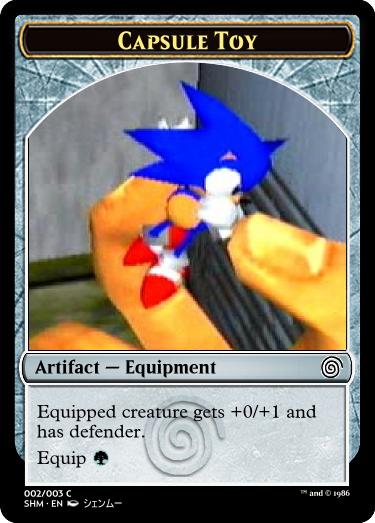 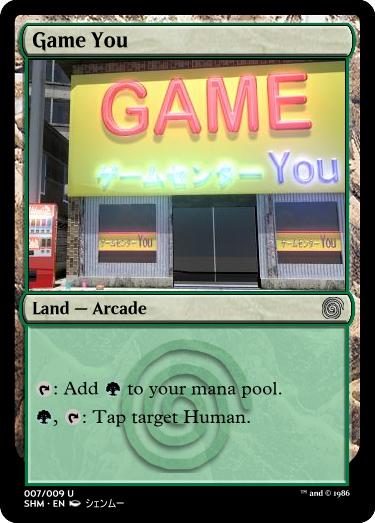 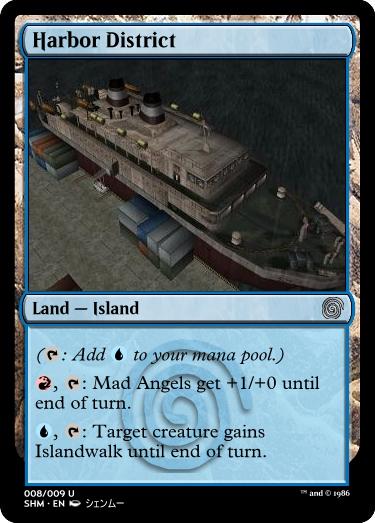 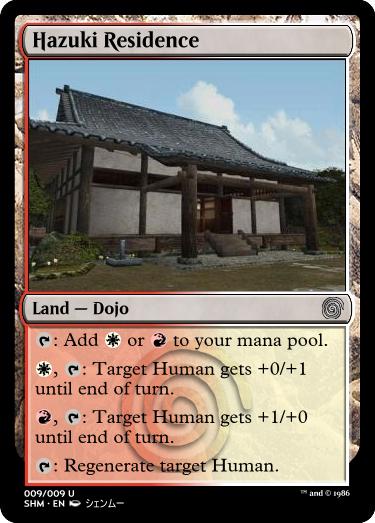 I put in a few little neat details, like the date, the artist, the set name, and the set symbol.

I'm just going to put this here in case Ian goes looking for it. It strikes me funny. 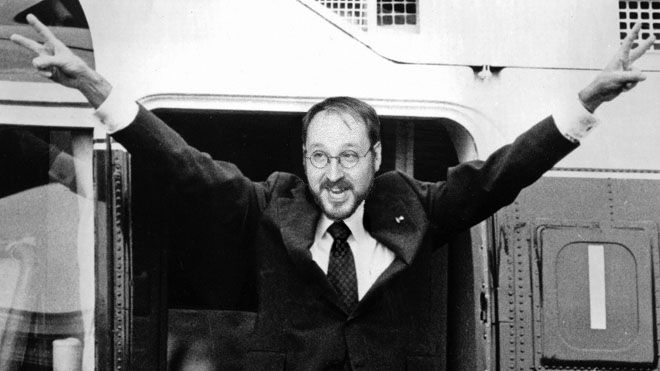 So, given Ian's penchant for odd rhythm games, do you think there's any chance we could get a Gitaroo Man stream? I suppose it would depend on if they have a way to stream PS Vita/PSP games (and if Ian even wants to play it).
Top

Moussefilledkitten wrote:So, given Ian's penchant for odd rhythm games, do you think there's any chance we could get a Gitaroo Man stream? I suppose it would depend on if they have a way to stream PS Vita/PSP games (and if Ian even wants to play it).

I second this request. Gitaroo Man is my second favourite rhythm game after SC5.

Also, it was a PS2 game originally, which should be a little bit easier for them to stream - but then we would miss out on Ian and Heather/Cori/??? playing duet mode, assuming they had a way of getting two PSPs on screen at the same time?
Top

7SecondsLeft wrote: Also, it was a PS2 game originally, which should be a little bit easier for them to stream

Yeah, but Jer removed the PS2 from the streaming office, sadly, so they would also need to get another of those.
Top

Are PS3 and PS4 not backwards-compatible with PS2?

Early model PS3s were backwards compatible with PS2 games, but later models took out that capability, as I recall. I imagine the PS4 doesn't have the ability either.

That said, you could probably pick up a second-hand PS2 for pretty cheap.

Yea, one model of PS3 that was only released at launch had PS2 support. I don't think PS4 added it in. The most support you'll get in terms of backwards playing is PS1 games on PS3.
Top

According to this, the 20GB and 60GB NTSC Models of the Original PS3 has full backwards compatibility, while the 60GB PAL and some 80GB NTSC models are partially compatible via Software Emulation.

Heck, if there was an easy (ie cheap) was of getting it from NZ to Canada, I'd give them my PS2!
Top

I think they secured another PS2 for Adam, but it wasn't working last Saturday.
Top

Or they could use ps tv? It has an hdmi cable so gitaroo man should work (theoretically) as it's a psp game that one can download for vita.
Top

We do in fact have another PS2 in the streaming office so it is possible.
I'm going to look into Gitaroo Man as an addition for the next Rhythm Tuesday!
Top

Ian, after watching you play chroma squad several times I really want to point out several bits of strategy that you are really missing.

2. Prioritize your targets. If there are enemies who heal, enemies who can do multiattacks or enemies with special attacks they should be your first targets.

3. Use your special attacks effectivelySeveral of your personal weapons can kill an enemy with a single attack but frequently you use them on enemies that are already wounded. The sword attack can do 150 points of damage, if you use it on a enemy with 20 HP left you are wasting 130 damage.

4. Special Mecha attacks In the mecha battles each enemy has three health bars, green yellow and red damage from attacks on each bar do not carry over. In each battle you punched a enemy down to less than 3000 health on a bar then used your sword, bazooka or chest cannon, the sword and bazooka do 10,000-12,0000 damage and the chest cannon does over 20,000. Similar to the special attacks you are just throwing away damage.

5. Listen to Cori Cori keeps giving you amazing tips such as "your gun has a range of 4" and you reply "ok right" then move Kathleen 5 spaces away and say "OH NO im not in range"

6. Most importantly plan ahead a little Your show is super funny and I love the style of it but it hurts to see you lose battles because of basic strategy missteps. You have 5 fighters and you often miss out on attacks by having someone attack a close enemy when they should be attacking a far enemy.

Out of interest as I'm way behind and using the YT replays (The show is too late for me to watch live in the UK), did Ian end up finishing Shenmue, or did he just go back to it later to a point the replays aren't at?
Top

Ian thought he was done with the Forklifts. I don't think he could have called Shenmue 3. (For serious, Shenmue 3 is getting a kickstarter to be made.)
Top

Denizens of the Internet! It s now time to help me pick the next game that we will play on i, Horner.

Go, register your vote, and make your voice heard.

I've added it to LRRbot, set to end when your show starts.

You might want to revise your poll a bit. Indigo Prophecy is Fahrenheit, and according to Twitch's banned list (http://help.twitch.tv/customer/portal/articles/1992676-list-of-prohibited-games) the Director's Cut edition of this is there, so you may run the risk of getting accidentally banned by the content bots and have to wait several weeks while your appeal gets reviewed.
Top

So there's a new Humble Bundle and it's all Japanese games. This includes Supercharged Robot VULKAISER (and Hyperdimension Neptunia). I don't know if you have any interest in shmup games but it looks entertainingly 70's and if Ian wants to try it I have a gift link that I can send to LRR.
Trippzen or Scy
Battle.net: Scy#1617
WoW: Scy (US-Proudmoore)
Top

As per my voice on stream, here's the poll for y'all to decide whether or not I grind FFT on stream or at home.

Here's a short list of games I'd classify as "Ian games" that I could think of off the top of my head:

Front Mission. Another Square Enix turn based SRPG, but with mechs. Front Mission 1 and 4 (on DS and PS2 respectively) are my personal favorites, but I know 3 is a fan favorite.

Gundam Battle Assault 2. (PS1) 2D sprite-based fighter, story modes might be a good way to do a bit of a stream.

Dynasty Warriors Gundam: Reborn (PS3) Some story mode content may be good for a bit of a stream, can get a bit repetitive to watch though.

Super Robot Wars. Pretty much any one on PS3 or SNES / Super Famicom would be the best choice. Another SRPG, but featuring mecha from various anime. All in Japanese though, so not sure how much language comprehension would be necessary.

Alternatively, for the next Rhythm Tuesday:

Rez HD or Child of Eden on the Xbox 360. Would recommend Rez first since CoE is essentially a sequel. You could play them in either order though.
Top
Post Reply
51 posts