Talk about the latest LRR video or discuss your past favorites.
Post Reply
143 posts

Also: at the end of the T shirt add you can hear someone (paul?) say cut.

I think I heard a laugh.
Top

I think the music tied together the whole video quite nicely. And were both of James characters supposed to be the same guy/ Or am I retarded and thats not James in the line.

Great video. I too dislike those who over-tweet and constantly update their status.

Have to compliment Graham on the ending. Prostate exam: always funny.
I
HATE
BIG
SIGNATURES
knife to meet you, I am a SPY
Top

Evidently this was my 33 seconds of StLRRdom.

Twas fun to film, all I knew was to stand in a line and look like I was bored waiting for the concert. In the baking heat my first inclination was to pull out my phone and start pretending to play Tetris

Most LRR videos I quite enjoy. However, I haven't laughed so hard at an LRR video since "Wyy" and "PSA:Uwe Bowle". I have started using Twitter but I try to avoid overuse on it but can relate to the goings on in the video. Good work guys!

I'm not always a fan (at least the first time around) of your 'silent' movies (that aren't x ways to y) but this one had me smiling the whole time, with a few laughs sprinkled for flavor.

Point of note: In the credits, Lying's name is spelled "Maugan" thus lacking a vital "h." You might want to fix that :>.
I can put my hands in my head, and I can laugh it in the face.
Top

Man. Lyinginbedmon is so small, you could just pick him up and throw him!
Wil Wheaton says "Game over, Moonpie."
Top

Splunge wrote:Who here managed to identify Matt in the Darth Vader costume before Jer called him by name?

I did! It was just something in his finger pointing...or perhaps it was the nasal qualities of his voice that shone through even from underneath the Vader-y voice effects!
Top

I swore it was Brad too.

So much in fact, I quickly glanced down searching for his name in the credits.
I can put my hands in my head, and I can laugh it in the face.
Top

I think that was Graham starting to laugh at the end of the ad.


And xahldera, the more links to us you post on Twitter the better. Go nuts! (Well, don't annoy all your friends, though. That could be bad.)
Special People: Superhero-with-a-twist web fiction, updating twice weekly.
Losing Freight: A sci-fi serial where readers vote on daily polls to shape the future of the story!
Top

Cake wrote:Man. Lyinginbedmon is so small, you could just pick him up and throw him!

Only Bill would really have that ability, but either way, harsh man!

You're 5'1" right? Even by my normal-Canadian(not giant LRR team) standard, that's small.
I can put my hands in my head, and I can laugh it in the face.
Top

There are not enough street musicians in the world who play bass. I would actually consider giving a bass playing street musician money just for the novelty.
Top

Trisha Lynn wrote:Um, which one was Lying again?

The shorter person in line for PV.

The one next to James? If so... I thought that person was a girl.

He wears a ponytail (as his pic alludes)

I think you can be forgiven. At least by me, who thought the same the first time round...

and glad to see that Morgan is Finally Back.
Last edited by Mr. Silent18 on 15 Sep 2009, 15:21, edited 1 time in total.
If loving Canada's finest sketch comedy group is wrong, I don't want to be right!
Matt: Glittery Douchebags(lol)
Top

Trisha Lynn wrote:The one next to James? If so... I thought that person was a girl.

And look closer, those are fingerless gloves

If I was any kind of female, the strap from my laptop bag would be making it fairly obvious.
Top

The crabcore bit made me chuckle.

I'm sure some of these jokes went a ways over my head, but it was overall quite entertaining.
Top

I only just realized that in the ad, Jer is dressed like Han Solo. That's totally Morgan's gig, you guys!

Addendum: Also, Morgan now looks like a cross between Bret McKenzie from Flight of the Conchords and Gaspard Augé from Justice. This is awesome.

Addendum 2: For the imaginatively impaired... 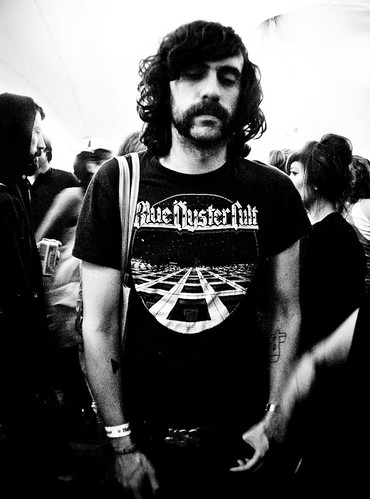 Dominic Appleguard wrote:I guess what I'm saying is that it would have been better if some reason were provided for why these random people read his tweets.

That's why he tagged his note about the nurse #royalhospital. Theoretically the nurse reads posts about his hospital.

As for the others, a lot of mobile devices, like the iPhone, have Twitter clients with a "Nearby" feature that just shows you people posting nearby.

I did think about this.

Oh, I had assumed that they were all coincidentally following him, and he hadn't yet realized the downside to his popularity.
Top

Awesome. I didn't really laugh too much, but it was very well done. I plan to experiment with motion tracking in my next film, as well.