Drop by and talk about anything you want. This is where all cheese-related discussions should go
Post Reply
93 posts

/stops being a musical pedant

I agree with Mimm.

Jazz in terms of voice with accompaniment, big band or dance music from the mid-20th century are usually good. There's so much freedom in Jazz, just because I like Ella Fitzgerald's version doesn't mean I'll like anyone else singing the same song.
Top

This to me is a pretty much perfect album. It uses a great mix of musical styles and themes, along with the astonishingly versatile voice of the singer, Adam Turla. There are pirate shanties, straight up rockers, haunting tales of men trapped in a mine, homages to Johnny Cash and a simultaneously depressing and uplifting album closer. Fantastic album.

Also, same band, Like The Exorcist But More Breakdancing

The band's first album, and you wouldn't be able to tell it's the same people. It's largely very ethereal indie type stuff. I mainly include it here for the two breathtaking instrumentals, Those Who Stayed and Those Who Left, which are two of my favourite pieces of music.

Also, did I mention they have a hot cello player? 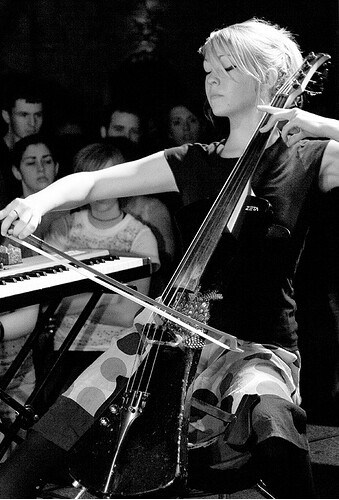 I'd agree in general with liking tracks more than entire albums when it comes to Jazz. I think the Very Best of John Coltrane is a great starter album, though not the version they have on iTunes. Miles Davis is another good choice, like Matt said, Django Reinhardt, Thelonius Monk, Duke Ellington are good starting points. I'll bring up some other stuff later on about more modern and multiple genre groups.

this album is perfect. musically and emotionally beautiful. i would go as far to say this is the single greatest record ever made.
we sometimes catch a window, a glimpse of what's beyond
http://www.underaglassmoon.wordpress.com
Top

Thanks all. I'm basically treating this as all new listening material.
A pap-nerv'd softling!
Top

this album is perfect. musically and emotionally beautiful. i would go as far to say this is the single greatest record ever made next to Kid A.

fixed that for you. :p

I'm going to go ahead and be a stereotypical little shit and say Pink Floyd's Dark Side of the Moon. First album I've ever listened to where all the songs became a piece of a story (aside from albums written expressly to communicate a narrative - The Wall for instance). By the album's end, everying just seemed to make sense. And I wasn't even high.
Top

Say what you want, but; Big Shiny Tunes 2.

My soundtrack to being 15. Stay strong, friends, stay strong.
*
Top

on the strength of your recommendation i acquired this album.

First impressions: It's really good from the 6th song onwards! first 5 are terrible, but it's stunning from Tiny Vessels through to the end.
Thoughts From a Fish Bowl<------ my blog...

on the strength of your recommendation i acquired this album.

First impressions: It's really good from the 6th song onwards! first 5 are terrible, but it's stunning from Tiny Vessels through to the end.

I disagree with you almost completely. New year is great, and the sound of settling, while obviously single-fodder is a great song lyrically. Tite&reg, expo 86, and lightness are forgettable perhaps, but I think terrible is a little strong. Besides, I have to admit I like the silly metaphor of title&reg to much to really have a problem there. It's got an akward charm that fits with the theme of the album. (and upon a quick relisten, I actually really like expo, it's just not a stand-out track.)

edit: I do however agree that the second half is drastically better.

Elvor, I would argue that the cellist in question is merely wearing eye-liner rather than being more attractive than the average person.

It's a surprisingly common mistake to make. It goes back millenia, came into fashion with the Egyptians and Mesopotamians, never really went out.

Overlooked album that is awesome: "you i lov///" by sub.bionic (2001) on Extasy Records. This was my high-school soundtrack, and stands out to me as an example of some of the good to come from Napster's original business model. I found this band from the sponsored ads on Napster.

I recommend that everyone try and give them a listen. It's similar in some respects to Radiohead, but I can't really place any of the other influences.

As for what I'm listening to right now, because I'm not even going to try and say what exemplifies what I like best about music, I'll have to point to "Hello Mom!" by Modeselektor. I'm really digging the drum and bass influences, and the flow of the tracks, but I really don't get to hear it at its best all that often. This album works best when it's loud enough that you can hear all of the subtleties, and not so loud that distortion destroys the whole thing.

I've been trying to listen to new music recently, and I shall take into consideration everything I've read in this thread. And Kid A is pretty dang awesome.
Formerly madAlric
All of the Crapshots in one place
Top

That's because it obscures part of your face.

Jazz Records Everyone Should Own:

I wouldn't recommend getting just any Miles Davis album, because he experimented a lot and some of his stuff is less accessible and/or less good and/or less conventionally jazzy.
Last edited by ThrashJazzAssassin on 21 May 2010, 11:29, edited 1 time in total.
Twitter
Google+
Sketch Comedy
Top

That's because it obscures part of your face.

I almost didn't, because it was just so easy, but, well....
Twitter
Google+
Sketch Comedy
Top

this album is perfect. musically and emotionally beautiful. i would go as far to say this is the single greatest record ever made next to Kid A.

fixed that for you. :p

Kid A is also one of my favorite albums, but ok computer still comes out on top for me. Probably because the album is more focused and concept oriented, while Kid A is all over the place.
we sometimes catch a window, a glimpse of what's beyond
http://www.underaglassmoon.wordpress.com
Top

ThrashJazzAssassin wrote:I almost didn't, because it was just so easy, but, well....

Yeah, well...I hope you get eaten by a lion!
A pap-nerv'd softling!
Top

Esbjörn Svensson Trio. Viaticum is my favorite album, Strange Place for Snow is a strong second. But really, try to find the live stuff thats all over the internet. EST is so much better live. The live albums will do too, they actually are some of the best live material out there.

On a more known note, they only album Hip Hop gave that I really never want to lose: Aesop Rock - None shall pass.

ThrashJazzAssassin wrote:I almost didn't, because it was just so easy, but, well....

Yeah, well...I hope you get eaten by a lion!

THat's how flat you just fell.

Another album that means a lot to me- Shania Twain "Come on Over". Soudns of my childhood.

That was a stage fall, dearie.
A pap-nerv'd softling!
Top

Oh, ten pounds of this. It's their best album, imo. Though as for an individual track I'd be between "Brothers on a Hotel Bed" and "Amputations".

As for albums that changed my life, I'm going to have to go with:

XO - Elliot Smith: Yes, I know, cry moar. But this album, above all others, got me into rock music. I was given it when I was twelve and though I know it sounds really cheesy it was something I could relate to, as I was quite emotional at that age. Now, this could have come and gone, but even now when I listen to it, it's still very striking to me musically.

Kid A - Radiohead: I don't think I'd be as big a fan of them as I am if I hadn't heard this album all the way through. I wouldn't say there's a single track from it that I necessarily would old up and say "This is the best example of a Radiohead song ever," because most of the songs sound incomplete imo, but taken as an entire album it's not so much music as it as an experience. I certainly don't mean that in a bad way. It's definitely their most atmospheric and beautiful album.

Best Track: "Morning Bell" (as much as I like Amnesiac, this version is just better. It sounds so much creepier)
Longwood: Location of Harvard Medical School where evil mad scientists and Jews create transgenic monsters.
Top

Hearing "everything in it's right place" in the middle of a two hour long set in an open air concert venue, with the most incredible light rig I've ever seen, in a torrential rain was possdibly the most surreal and gratifying musical experience I've ever had.

I usually don't buy or listen to whole albums, so I don't really think of artists album to album, but song to song.