Valkyrie-Lemons wrote:I thought it was a little too cheesey, but then again, most Doctor Who episodes are these days.

Doctor Who has always been quite cheesy. That's one of the endearing things about it.
~I'm probably not serious~
Oh and you can just call me Dave.
No need for the whole screen name.
Top

I hope the new companion is nothing like Rose/Amy. For a start it'll be annoyingly awkward when River meets Oswin.

"Yes Oswin, this is my wife. Please kindly stop acting like a female character written by a male writer. It's very stereotypical".

It would make me happy if now the only living organism to advance sexually onto the Doctor is River because snogging can get cliche'd. I want sexual tension out of my Fantasy series please. The Doctor is married. I don't want awkward 'unfaithful' scenes.
My website: http://www.stephenwillisart.co.uk
My Link.tree: https://linktr.ee/stephen.willis.art
Top

Yes. I always call the the sultanas so I forget their actual name.

Dave-O_Boy wrote:Doctor Who has always been quite cheesy. That's one of the endearing things about it.

I know, but I think the ending was too much of a "Oh come on!" type of cliché cheesy ending. And then the connection with previous episodes was just so stupid. I mean I'm a great fan of stories/series that try and interweave plots, stories and themes throughout a whole series(es), but this just had me rolling my eyes and saying "Really? That's what we're going to be doing here?".

Also, sorry for being vague, but I don't want to spoil the ending for those who haven't seen it yet. But I assume you know what I'm talking about.

I seen that ending and was kinda like "Really, that's what they're going with? Well ok then."

I preferred her more in the Dalek episode, but I still would very much like to see her in Jack Harkness in the same room. Talk about making the Doctor blush.

To be clear, I think we would all just prefer Jack to be back *at all* regardless of who he's on screen with.

Liked the episode- Served it's purpose to show the emotional effects of TATM and to start the second half of series 7. All the while giving a traditional Doctor Who experience.

New companion- Interesting that the doctor finds the Oswin/Clara/yosaffbridge mystery more interesting than the companion themself. Perhaps in a way to avoid tension/dealing with River?

New Tardis- New on the inside, old on the outside. Interesting that symbolism, wonder if it'll come into play in back half of S7.
Top

So, for real... any idea what is up with Clara? Cause I have no clue - I thought it was just going to be a fake-out death, and then they'd go out on an adventure and she ended up inside the Dalek at a later point in their friendship. But clearly that is not the case. Clone?

(Also, I really liked the episode a lot. I thought it was a much better special than the past two years, and also would have been that much better if she hadn't kissed The Doctor. SIIIIIIIIIGH. I really hate that. Martha's crush on The Doctor made her uninteresting, and Amy kissing him made me not like her for a long time.)
Team Cybershark

Yes but this is during the female-suppressed Victorian era. So her initiating the kiss shows us she is a strong character who defies social conventions.... yeah, I really hated it myself. There are better ways to show that element of the character without snogging the Doctor.
My website: http://www.stephenwillisart.co.uk
My Link.tree: https://linktr.ee/stephen.willis.art
Top

I think you're all over-analyzing a kiss, and it was probably done as a quick easy way, in addition to THE ENTIRE REST OF HER SCREEN TIME to emphasize how much she is like the Doctor. Remember, we know that the Doctor is hella-old and we tend to not think of him in that way, but Clara/Oswin/yosaffbridge *doesn't*. The Doctor is interested in finding out her mystery because she is a lot like him.
Top

The new TARDIS control room seemed a lot smaller than recent ones, much more old style.

The Great Intelligence was apparently a reference to former adventures (specifically the tube map reference) as opposed to setting up future adventures.

Nice to see these callbacks. I think they're really going to have fun with the 50th year things. I'm still hoping for a multi-doctor episode to celebrate the anniversary though...
Keab42: Keeb-forty-two Deal with it. @Keab42 | | +Keab42 | | Tumblr
Top

Re: The Great Intelligence and the London Underground:

The Abominable Snowmen
The Web Of Fear

I have to admit I really enjoyed this episode.

The theme tune re-arrangement was pretty cool, though I have to admit I do enjoy the more orchestral versions from earlier in the new series. The visuals from the opening titles were ok, and I really liked the return of the face.

The episode itself, I thought was pretty good. I thought the kiss was a bit unnecessary but didn't have too much of a problem with it.

Seems interesting with the hints of the Old Ones appearing (the GI) and Omega(Omega II) so far.
My website: http://www.stephenwillisart.co.uk
My Link.tree: https://linktr.ee/stephen.willis.art
Top

Time to actually slog through the audio files of The Abominable Snowman and The Web of Fear, I guess. I think there are some reconstructions around, so I'll try to find those. I watched Downtime recently, so at least I have that behind me.

What's the "Omega II" theory, MM? Does it tie into the whole "Doctor Who?" thing? I've kind of been assuming that that was a continuation of the Cartmel Master Plan.
Dale
Top

is the general gist of the Omega thing.

Well ish.
Trying to find the really good crack-pot theory that screen-captures every-single symbol in New Who which is of an Omega symbol with the Roman numerals II over it.
Last edited by Merrymaker_Mortalis on 26 Dec 2012, 13:57, edited 2 times in total.
My website: http://www.stephenwillisart.co.uk
My Link.tree: https://linktr.ee/stephen.willis.art
Top

These aren't spoilers. These are just screen-caps. 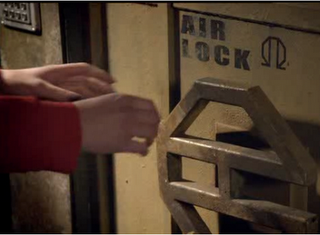 If it has nothing to do with Omega. It does mean that the Monks in Flesh and Stone 2 parter are affiliated with The Silence. Or the other way round. The link cannot be coincidence.
My website: http://www.stephenwillisart.co.uk
My Link.tree: https://linktr.ee/stephen.willis.art
Top Funny how Clara twice mentions running before death, as did Riversong.
same people?
My website: http://www.stephenwillisart.co.uk
My Link.tree: https://linktr.ee/stephen.willis.art
Top

I enjoyed the episode, I agree the kiss seemed unnecessary to either the story or the character, but it's not a big gripe.

I'm not sold on the new opening titles, they're very different to the evolution we've seen with them since nuWho started, but I suspect it'll grow on me.

I think combined with Dinosaurs on a Spaceship, I quite like the more Doctor + scooby gang storylines. I don't think they should necessarily become the norm, but I'd be in favour of a return to 2-3 regular travelling companions (although without the "couple" angle linking any of them for a change [in nuWho at least]).

As for the ending and what it means for the remainder of the series (remember this is just a Christmas themed mid-series episode rather than a stand-alone like most previous specials), I'm suitably intrigued by the mystery.
I do wonder though if the Moffat era is going to end up being remembered solely for ALL the companions having more complex time-lines than the Doctor - even Brian williams ended up with a grandson older than him.


Also, trailer for the 2nd half of the series!!! - with another appearance of Vastra, Jenny & Strax, plus a new Cybermen design that I much prefer to the current one.

When you said "Jenny" I thought you meant a different Jenny and I got let down. Aww man. Still looks fun though.
~I'm probably not serious~
Oh and you can just call me Dave.
No need for the whole screen name.
Top

although I guess technically the doctors daughter/clone should be spelt Genny seeing as her name is short for "generated anomaly".

Clara is a regeneration of Genny?

Both deal with children, in less I mis-understood Junior Entertainment Manager. I'm guessing junior in this case is the same as a junior minister, as in to do with seniority with position. Not junior in relation to children.

Unless it's meant to be vague and could be read both ways, but I presume if they meant children they'd have called her a "Children's Entertainment Manager"

I'm trying this 'Twitter' thing, if you just want to send a message/question/joke, please send it to: @Valkyrie_Lemons , thanks!
Top
Post Reply
3779 posts