Drop by and talk about anything you want. This is where all cheese-related discussions should go
Post Reply
255 posts

I guess in the coming weeks I'll decide that for myself.

"Explanations exist; they have existed for all time; there is always a well-known solution to every human problem — neat, plausible, and wrong." - H.L. Mencken
Top

Watched it, not vey sold.

As has been pointed out, on a web-site that has Zero Punctuation, Extra Credits and MovieBob, another guy with a show where he talks about games feels unnecessary, especially when they're talking about things that have already been talked about, and making similar points, only without the colourful drawings.
Visit my shinny new bloggy thing: Vaguely Philosophical. Updating every Tuesday! This week a short story!
Top

It seems to me he is trying to mix Extra credits and yahtzee together while not succeeding at it. And yea subjects been covered better by EC moviebob and yahtzee before
Top

As someone who would watch this on Destructoid, it's nice to see it on the Escapist, but... it does kinda feel like these grounds have been tread by other Escapist shows. Funny angry British guy? Yahtzee. Insightful commentary on the industry? Extra Credits. I do like the show, but I'm really unsure it'll find its niche on the Escapist. I guess Jim only signed on for the money? When Destructoid's main podcast was winding down, he was pretty much begging for stuff.

Had problems with many aspects of the show; though weirdly not with his accent as several people on The Escapist were complaining about. Probably won't follow it.

Sod's law and the vagaries of hindsight dictate that the show will inexplicably improve over time and I will eventually look back on this post and cringe. Or perhaps not.
"In the neighbourhood of infinity; it was the time of the giant moths..."
Top

I don't get the point of adding this to their 'programming'. I don't have a problem with the accent but just the content. I don't know that I really want to watch another rant program especially since there are better ones out there. The constant 'uhms', the over use of the word fuck, the lack of any visual variety (there's a very good reason the other videos have cartoons or images instead of people talking), and the poorly prepared arguments are the major reasons I didn't enjoy this video.

If I want to see thoughtful analysis of the game's industry I'll watch Extra Credits. If I want a sardonic deconstruction of geek culture, I'll watch Bob. If I want irate video game opinion, I'll watch Yahtzee. If I want to watch a fat British man swear a lot for 5 minutes I'll... well now I know where to go if I ever need that.
Join The War Against Pants
http://twitter.com/aeric90
Top

I'm in the "could only watch for X minutes before turning it off" club. So far not sold, maybe the show will improve. I used to not like Lisa Foiles Top 5, now I kinda like it. We'll see how it goes with this one.

Bananafish wrote:No, you see, he's being sexist ironically so it's cool,

There's a meme in that somewhere...Sexist Hipster? 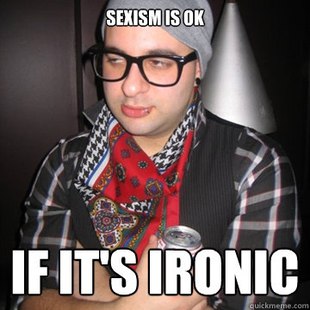 If you feel that he's delivering his message in a destructive way, then the only sensible thing to do is to try to have a reasonable discussion (one that doesn't start with gay fanfics, for example). Writing someone off because you don't like the way they communicate is fine if you're deciding what to watch, but don't kid yourself into thinking it's somehow a feminist action.

But, as I said before, show kinda sucks, so you don't really need an excuse not to watch it.
Top

Not to split hairs, but the problem isn't with the way he's delivering his message, but with the message itself.

I find the sentiments he conveys absolutely foul, but they would still be foul whether they were delivered in a polite letter or in a sweary twitter fight.
A pap-nerv'd softling!
Top

There's a difference though, Theremin.

Sheer disagreement isn't enough to malign someone. There are people in the world who hold entirely polar opposite views and values than your own. But if they are polite and inoffensive about them, what right do you have to condemn them?

Now, this guy's message is iffy. But it's not so much that he holds these particular views themselves, as much as it is that he doesn't have any good basis for holding them.

If he had some sort of rational argument to stand on, short of being able to demonstrate clear logical fallacy, we'd have to admit that his rational interpretations were just as valid as our own.

Now, (un?)fortunately, he has no such basis. He's just a troll.

I disagree with your first point. Some views deserve to be condemned regardless of how nicely expressed they are.
A pap-nerv'd softling!
Top

Can I interest you in some cannibalism today sir?

Theremin wrote:Not to split hairs, but the problem isn't with the way he's delivering his message, but with the message itself.

So, the point of the whole thing is that he's talking about things that are totally normal in the games industry. Like, can you really name one of Mai Shiranui's character traits? No, she's pretty much just the tits. And he writes as someone who is TOTALLY OKAY WITH THAT, like it's not fucked up at all, when of course it's super fucked up. The hope, I'd imagine, is that giving such an extreme example that nobody could possibly agree with it will get people who haven't noticed to say, "wow Jim, that's pretty fucked up!" and actually think about how horribly misogynistic much of gamer culture is.

Is it crass and immature? Absolutely. Is it an obviously heinous thing to want to convey? Not really.

That, and, pretending that super messed up stuff is totally normal can actually be funny if executed correctly (hopefully this is obvious, given what forum this is). Given his popularity, I'd say that whether or not Jim does this is a matter of taste.

Regarding "feminazis," I do think Jim is somewhat misguided. Those sorts of people do exist, but they're so rare it's not worth talking about, and anybody on the internet who appears to be one is definitely trolling. But by the same token, attacking Jim because you feel his language is destructive actually is a really crappy way to practice feminism.
Top

So you're saying he's saying misogynistic things ironically in order to highlight the misogynistic culture that surrounds gaming?
A pap-nerv'd softling!
Top

I could be completely full of shit, but either way he definitely doesn't believe that crap.
Top

I agree with you, in a way.

I acknowledge that he is a writer, and that in his work, he often uses an exaggerated form of the rhetoric associated with sexism for comic effect.

However, I think that saying he uses it to highlight an ill of the gaming industry rather than simply for a few ironic belly laughs is rather giving him too much credit.

I think this because of the stuff we see him saying in that twitter exhange. Now, I understand that it was an argument, but even in an argument, I would never even think to pull out phrases like 'attention-seeking little bitch' or 'feminazi slut'. That goes double for something like 'Just make sure to ask your husband before you use the computer next time'.

Had he called her a retard, or an asshole, or a fatfuck fuckface, and we probably wouldn't be having this discussion. But he deliberately chose gendered insults like slut, cunt, and bitch, and then deliberately made reference to a sexist stereotype when nothing involving misogyny or sexism had even been brought up. That kind of specificity and intensity of slur doesn't come from nowhere.

So, in short, I think he is a sexist and a misogynist, but that it can be hard to see as plays a cartoonishly exaggerated version of himself in his work.
A pap-nerv'd softling!
Top

... I just don't get that feeling of comedy and passion that I look for in a comical video game video host and series.

He feels like a guy who thinks that he can rant and make it funny, which also means that it can't have the redeeming feature of it simply being a rant for him to vent.

The camera is boring, wearing his sunglasses was an extremely bad idea ...

I just can't find any redeeming feature to save, at least, this video. It's not horrible, but it's really uninteresting and I kept getting distratced while trying to watch it.

EDIT: And when I saw his add earlier, the picture around and behind any videos that you watch on the Escapist, when I was watching some LRR videos earlier today I thought that he was one of those cheap commercials that I've heard so many speak about. He seriously looked and looks like a sleezy cars salesman to me.
Hurp-De-Durp!
Top

I've not yet watched the Jimquisition. I've heard a bit about Jim Stirling before, but after seeing the ads for his Escapist show I was sceptical.
And after reading the almost unanimous disapproval I doubt I ever will give it a chance.

That episode was not.

Jimquisition is pretty much just a Vlog that was picked up by E.
H̼̮̖͓̻ͮ̀ͬ̓e̟̦͉̾̔̀ͣ͆̄ ͚̤̈̉ͦ̎ͭ̚c̰̠͚̜̹ͪ̐̎̃ͅo̗͌͛ͥ͑m̍ͬͥ̚e͍̱̲̤͚̹͔͛s͚̱̤͚̲̭̗̃̎ͭ̚.̘̫̖̮̠͒̔.̝̹̟̳͚̂̆̋͌̐̚.̬͓̰̃̑
Top

Okay, I'm going to try to watch this. But may I say that when you put into the description bar for the first episode "Let gaming's biggest douchebag...", it's going to really screw you over.

00:56 - Okay, he is making a good point. Expecting two types of media to be synonymous with each other is unrealistic. Not bad so far.

01:44 - And he's completely missed the point of why developers are making games seem more cinematic, which is a point Extra Credits has covered a few times. Games are trying to become an art and a media that is legitimate and teaching people about the world around them.

02:22 - The terms "Hollywood production values" and "Film quality Narrative" piss him off? He seems to have forgotten that Hollywood is often the first place where production tech is invented. I mean look at the kinds of work and programming that Pixar does for their movies. For "Finding Nemo" the invented a whole freaking system to make the water textures realistic and multidimensional. Not to mention the fact that Movies had been around for a good 50 to 60 years before video games came about, which means that video games are trying to learn from Movies, TV, and other forms of media.

02:51 - Wait, he's saying that films are where we get narrative that has a beginning middle and end? No wonder he's not making any sense, he must have missed that whole section of schoolwork on LITERATURE. *facepalm*

04:16 - Games can't be accepted as a medium of art if it follows the same path as movies? Bull shiiiiiiiit. Games HAVE to follow the same path, because at the points where movies failed, games have the history books to look at to pre-determine how they will face the challenges and failures of movies. Those who ignore history are doomed to repeat it, as they say.

I think this is a concept that is done more maturely by Yahtzee, MovieBob, and Extra Credits. I sat through the whole thing and I can say without a doubt that this series is a failure.

To be fair, those two things don't describe Heavy Rain at all.
Top
Post Reply
255 posts