Just got my DB5 Shirt! [Picture]

Drop by and talk about anything you want. This is where all cheese-related discussions should go
Post Reply
55 posts

Just got my DB5 Shirt! [Picture]

Just got my DB 5 shirt and I must say, it's pretty friggen sweet.

Had no clue about the Papercraft Bus!! that was pretty cool.

We had no idea they were doing that papercraft bus. That's delightful!!
Top

That red is *awesome*. I don't even mind when I get the shirts now (ordered two Chrono Trigger themed ones as well) because that alone will be worth the wait!

I've seen certain limited edition games, like The Witcher 2, had papercraft stuff too! Fangamer is best at paper + crafts!

Tensen01 wrote:The bus even has both the Bigsplat and the Air Freshiner and says "Tucson"

Now that is dedication. <3 Fangamer.

Guess what came in the mail today? 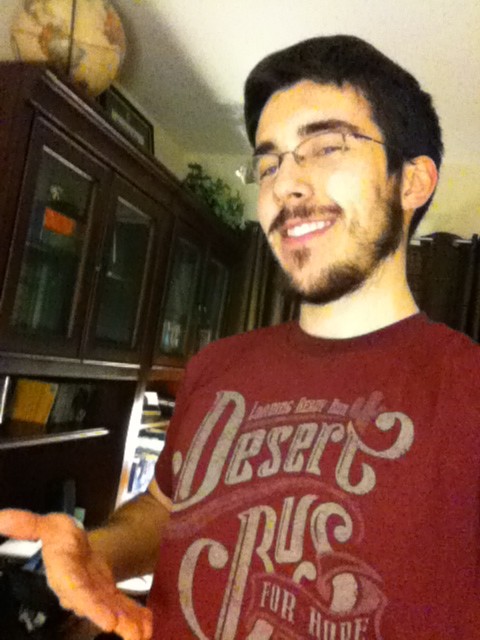 Exquisite. The color of this shirt is fantastic. I've never seen one like it. And the design! And the little papercrraft bus! (The license plate even says LRR-DB5!) Even the seal on the shirt bag was custom designed to fit the theme! Fangamer treats their customers like royalty.
Top

Huh, I didn't get a bus for my papercraft, I got an Octorok.

Then again, my shirt arrived, like, the day after Desert Bus ended, so the busses probably hadn't been printed yet.

Regardless, yes, Fangamer are bros.
An engine that both consumes and creates malice.
Top

Alexander... Yeah I almost didn't wanna open the shirt because I didn't want to break that seal.

Ottoman, it might be that I ordered the red one, which was strictly a preorder at the time.

Official 'Desert Bus for Hope' beard for next year, maybe?

You're silly. Beards can't come in the mail. It's obviously his glasses.
Check out my webcomic, The Meddlers! (Currently not updating)
Top

No no no no no, it was clearly his fabulous and not-at-all-fake looking toupee.

I beg to differ. http://www.etsy.com/search/handmade?search_submit=&q=knitted+beard&order=most_relevant&ship_to=US&view_type=gallery

I beg to differ. http://www.etsy.com/search/handmade?search_submit=&q=knitted+beard&order=most_relevant&ship_to=US&view_type=gallery

I did realise my mistake when a toupee was mentioned, but I don't regret it for one second considering it lead to this link.
Check out my webcomic, The Meddlers! (Currently not updating)
Top

Now I'm regretting the fact that I didn't get one
"Hi! I'm the Doctor! Do everything I tell you, don't ask stupid questions, and don't wander off!"
Top

Even my DB5 shirt arrived, and I live in Finland. So it should be arriving to anyone on the planet nowish.
Top

Damnit Tally! Now I have to spend MORE money!?

I wish I had known about these! I dig the red.
Walk in like DeNiro, and leave like Brando.

tak197 wrote:Damnit Tally! Now I have to spend MORE money!?

Just do what I did, buy $2 worth of yarn and make it yourself. It's ridiculously easy.
Walk in like DeNiro, and leave like Brando.

I received my Jer's Gloves recently as well, along with some DB4 wristbands and a DB5 patch, and a delightfully-written letter from the creator of the gloves, a Mr Alexander Ditto, which I will treasure for some time (due in part to including the washing instructions, I admit).

The gloves themselves have not been tested in scientific die-rolling situations as yet but they are certainly very effective at keeping my hands warm, very glad to have then.

Now I just have to be careful that my father never learns of how much I spent to get them...

Yeah, my parents are never finding out how much I spent on Ditto's scarf. Totally worth it, though.

No shirt yet for me, and I live in Canada even! (I did get a shipment notification, though.. will give them a few more days then I'll poke fangamer.)
Top

My brother (also in BC) just got his today, so I expect you'll get yours pretty soon.
"Jamfalcon's a super weird name" - Graham