Congratulations to the LRR couples on their engagements!

Drop by and talk about anything you want. This is where all cheese-related discussions should go
Post Reply
663 posts

Now I need to find some eggs and go benedict the FUCK out of them, according to wikipedia that sounds delicious

So the news is pretty shocking to you dawson, but now that you have had a second to think about it how do you feel? Lord Hosk wrote:So the news is pretty shocking to you dawson, but now that you have had a second to think about it how do you feel?

Oh mah gawd, that gif was mentioned when Van Der Beek was a guest on last week's Rove LA (Australian TV talk show that now also airs on TV Guide Network in the US)!
Last edited by MattAn on 26 Nov 2012, 15:50, edited 1 time in total.

I have no clue where this thread went but I like where its going!

It's going through a tunnel.
We put the brick on the accelerator.

Someday my phone will say "zzzark" and "fzzrkeeeurop" and it will be the best day any one person could dream of living.
We put the brick on the accelerator.

I'm drunk right now and what is this
<Witty Personal Message>

Graham wrote:We are also on Team Not-Talkin-Bout-Babies, for the record.

But you guys can talk about whatever you like.

Congratulations and thanks for picking that team, it is so much better than Team Won't-Stop-Talkin-Bout-Babies
Top

Thysane wrote:I'm drunk right now and what is this 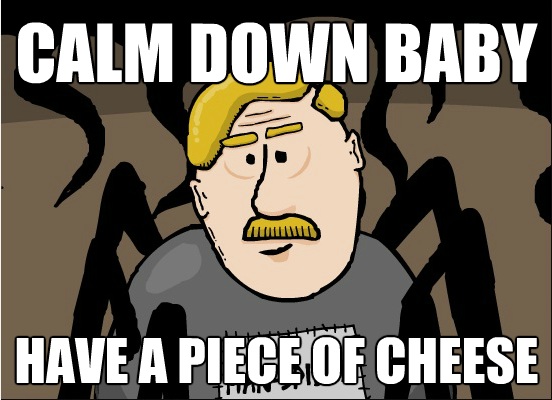 We put the brick on the accelerator.

MY PERFERRED METHOD OF COOKING EGGS IS MIXED WITH BACON! SCRAMBLED WITH THE GREASE FROM THE BACON THAT WAS JUST COOKED!
DELICIOUS BACON.
Did I do that right?
^( " )^
winner!
Top

Belated congratulations to Graham and Kathleen.
"In the neighbourhood of infinity; it was the time of the giant moths..."
Top

Man, all this talk about eggs in capital letters leaves me with just one thing to say.

You'll have to speak up, I'm wearing a towel!

Sieg Reyu wrote:I know a couple who got married recently and he changed his name. She really liked her name, they couldn't think of any good kid's names for it, and he wasn't a huge fan of his last name, so yeah. That happened. But with Stark, there is soooo much potential, so I don't see him changing his.

Those are some really good ideas for names.

Not to add anymore fuel to this, because, honestly, Graham and Kathleen having kids is something for them to decide.

But, BUT, you have ALL missed the prefect name should they decide, some time in their, to have or adopt a child, and it's male, IF they give them the last name of Stark.

Now let's go back to not talking about them having kids until/unless an announcement is made that is pro-baby having/getting.
Team Cybershark

So, this seemed like it would be less creepy for me to congratulate both Graham and Kathleen here... Rather than on Twitter, or on Facebook, or in chat... I miss chat.

I have briefly met each of you in passing, whether at PAX, or around Vancouver/Victoria. You are both excellent people, and I wish you all the best.

Congratulations!
Now, excuse me as I descend back into the shadows.
Watching since DB1!
Suffix in the Chat - all the Chats.
Top

Under_Score wrote:Man, all this talk about eggs in capital letters leaves me with just one thing to say.

Dawson says your gif is

I think you'll find that "Anthony" was suggested fairly frequently.

And start talking about

Man they have so much in common