Drop by and talk about anything you want. This is where all cheese-related discussions should go
Post Reply
28 posts

So this occurred to me when I realised that I was going all the way downstairs to the kitchen to fill a glass of water from the tap instead of using the bathroom tap in the next room. Am I the only person who does this?
Keab42: Keeb-forty-two Deal with it. @Keab42 | | +Keab42 | | Tumblr
Top

I voted other, since I have a well. The water isn't treated at all, so I fill water cooler jugs with water from the city and drink that.

But when I'm at other people's houses, I generally have no problem getting water from the bathroom tap.
"Jamfalcon's a super weird name" - Graham

I voted Kitchen.. But tempted to put "I refuse!"

I typically reuse water bottles (they're good to have around, but I don't like paying too often for them, plus waste, etc.), so I use the kitchen more often just because it's easier to fill them there, but I'll use the bathroom tap once in a while as well.
Top

It's not really a tap, it's the water dispenser on my fridge. Although I have been known to buy those big dispensers of drinking water to keep in my upstairs bathroom so I don't have to go downstairs for a drink.

I don't trust the water in my area. So I normally get bottled water if I need to or fill up a jug in town for like fifty cents.
Top

I use a Britat water purifying jug thingy. I only drink water from that.

I don't trust my tap water. Unless it's for making tea/coffee. Boiling it should take care of some of the unsavory bits.

My tap water tastes like chlorine, so I generally leave it sit out a few hours to evaporate and it's fine.
Formerly madAlric
All of the Crapshots in one place
Top

I voted "they're both the same you weirdo".
While I stand by that statement I always take kitchen water.
It's a matter of association basically. I associate bathroom water with toothpaste and kitchen water with foodstuffs.
So basically you are weird for doing this, but I am too, so we're equal.
"if it ain't shiny, rub it on your hiney"
Top

I always use water from our water filter, which lives in the kitchen. So I do go down to get water from the kitchen, but not from the tap. Well, not directly... 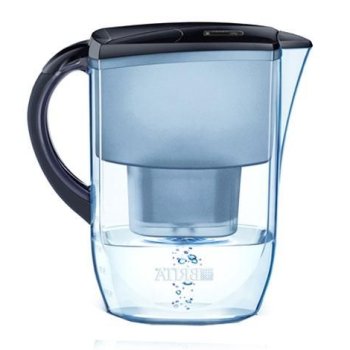 I gotta go upstairs and use the landlord's kitchen, so our bathroom tap is my main source. It SHOULD be the same, though.

Jimor - the plastic in those water bottles isn't meant for extended use - they're disposable for a reason. After a while, you'll start to have chemicals leech into the water you're putting back in the bottles.

If you don't trust your water supply, I suggest saving up to get a water filter and a handful of reusable steel water bottles (the latter really aren't that expensive) then switch over to that from your purchased bottled water.

(also, I love the trust everyone is willing to give the bottlers to ACTUALLY filter/clean the water they sell; how many people buy a big name with a reputation to lose like Perrier or Evian, and how many people just grab whatever cheap brand?

I have a water filter tap in the kitchen, so I use that. But I actually don't drink much water, I drink tea and once boiled and tea, and milk is added then it doesn't make much difference what water
you use.

empath wrote:Jimor - the plastic in those water bottles isn't meant for extended use - they're disposable for a reason. After a while, you'll start to have chemicals leech into the water you're putting back in the bottles.

I do re-use plastic water bottles, but I replace them weekly, regardless of how much use they've seen. I'm terrible at maintaining my stainless reusable bottles (mostly draining, cleaning, drying regularly), so re-using plastic ones is about the best balance I can strike between reusable and hygienic.
Formerly madAlric
All of the Crapshots in one place
Top

They should basically be the same, but I would expect that the distance between nozzle and sink basin would be greater in the kitchen, making it easier to fill a water bottle their than in the bathroom.
Top

I'll admit, I do have a bit of a hassle fitting some of my water bottles in the smaller bathroom sink, but I'm still more willing deal with that hassle (and keep my bottles on the counter next to the bathroom sink), rather than trudge all the way upstairs and across the house to the landlord's kitchen to fill them up.

@Jimor - *phew* Okay, yeah a week should be fine...I used to drink Gatorade fairly regularly, and would use those bottles washed out for water for months at a time...after reading reports about the BPA in them and switching to re-usable bottles, I *did* notice I was...less fatigued.

I swear the water from my bathroom tap tastes more stale and gross than my kitchen tap. I actually make a point of using the kitchen sink if possible. In general, Vancouver water is pretty good though (certainly no shortage of supply), so I don't bother filtering, but I drink a lot of cheap sparkling water because it's more fun.
*
Top

If what my parents told me as a kid is true, always go kitchen. Bathroom water comes, according to them, from/via a tank in the roof rather than a direct mains supply, and I was always discouraged from drinking it on the basis that 'there could be a dead pigeon in it'. A few years down the line, a few parts about that story don't make much sense (such as how the hell a dead pigeon is meant to get inside a sealed tank), but I next to never drink bathroom water as a result.

Although to be honest, I rarely drink water. Or much else, for that matter.
"Let us think the unthinkable, let us do the undoable, let us prepare to grapple with the ineffable itself, and see if we may not

Well, Ix, that would depend on how you house's plumbing is set up. It'd be vastly simpler for the plumber to just have all taps...er 'tapping' off the main intake from your municipality/etc, but water pressure issues could have them drawing off a holding tank, and again, easier to plumb ALL of them the same way. But then again, not EVERY single dwelling is ALWAYS set up in the most convenient way.

Which brings up an interesting point which MIGHT give Met's observation some credibility: length of plumbing within a house and differences in that (or even use of specific pipes) for one tap versus another.

Here's a case of what happened around this part of town a few years back: I've probably vented about water pipes leaking in our basement apartment's ceiling a while ago - it turned out to be the copper pipe was...substandard, and was prone to eroding away relatively quickly (like 10-15 years or so).

But the fun thing is, it didn't just happen to my landlord; a few months later, his neighbour had his copper plumbing leaking...and then a year later, my folks' place a couple of blocks away had leaks, and a couple of their neighbours...

In the end, it turned out that much of the copper piping used in home renovations and new home construction around St. John's in the late '80s came from the same defective supply (one of the benefits of living in a relatively remote, out-of-the-way place.

So there MIGHT be an issue with your plumbing that goes from your water supply to the bathroom tap, Met...or between the branch where the supply splits between the bathroom and the kitchen, at least. I know most plumbing is hidden inside walls/floor/ceilings, but you might wanna take a peek around...and a cheap, simple thing to try might be to check the screen on the end of your bathroom faucet; if it's clogged or dirty, it's easy to clean or even replace.

Except I live in a pretty tall (20 stories) apartment building, so my observation makes no sense, but I still believe it, dammit.
*
Top

Still, can't hurt to check the faucet out (and look under the counter - if you see green copper pipes (corrosion on the outside), or heaven forbid *mold* growing on/near them, let your superintendent know!

You'd be surprised how fallible something most of us take for granted - like clean drinking water - can actually be. That 'dead animal in the holding tank' is pretty unlikely...but it's not IMPOSSIBLE.

Happened in my elementary school.

Last time I had my building manager fix plumbing, they reversed the threading on my cold tap, which drove me insane until I figured it out.
*
Top

I went for they are both the same. Though the taps in bathrooms seem to add a different flavor... Might be the pipes.

Also when I'm back home in Te Anau and out on a boat I drink straight from the lake or waterfalls. Bottled water be dammed.
Top
Post Reply
28 posts