Drop by and talk about anything you want. This is where all cheese-related discussions should go
Post Reply
284 posts

I mean, I understand why it's a thing in Quebec. I just think it's wrong and, as you say, shameful.

Here's the thing: it's not Quebec thing. It's a rural Canada (including rural Quebec) thing. It's just more visible in Quebec because rural Canada already votes overwhelmingly Conservative so there are no votes to grab there.

Also, that niqab mess isn't going to win the election. Sure, there's a segment of the population (usually one that has no interaction with Muslims whatsoever) for whom the sheer existence of the niqab is worth bitching about. But when they have to chose between slightly annoying some people they'll never meet and actually getting the government they want, they tend to vote for the side that will actually get them something. See also: last Quebec elections, where Charter of Values + the possibility of Yet Another Referendum was crushed by the No-Charter/no-Referendum option.

(and even if it did have the potential to swing some votes, that particular issue peaked way too early.)
Top

Oh ho. The Liberals have just released their Platform (PDF).

I've not had a chance to review it yet, but here it is.

You're right that there's a divide on the niqab between rural and urban areas, both inside and outside Quebec. But I do think there is also a divide between Quebec and the rest of Canada. This isn't the first time there's been controversy about religious accommodation (turbans in the RCMP, kirpans, the construction of sukkahs). While there's been opposition and support all across the country (usually along rural/urban lines), these issues have always been particularly heated in Quebec, because they interact in explosive ways with Quebec nationalism.

I'm not saying controversy over accommodation is particular to Quebec; I'm saying it's more pronounced for cultural and historical reasons.

I mean... the niqab is polling as the number one election issue in Quebec right now. That's not the case in any other part of the country. There's something particular to Quebec going on.
Top

If you cannot vote on Election Day (October 19th) you can vote at advance polls, starting today. Check your voter registration card for times and locations.

If you do not have a voter registration card, you can check your riding, your polling place, and the times and locations for advance polls by entering your postal code here.

Advance polls are open noon to 8:00 PM on the following dates:

You must bring valid identification to the polling place to be able to vote.

Voter registration cards are not acceptable pieces of identification. You must have a valid form of ID to vote.

You can check if you are registered to vote here.

I haven't done one of these for a while, and with voting starting today, it seems like a good opportunity.

So... yeah. The NDP has collapsed, and the Grits and Tories are essentially tied. Currently the Grits are ahead with a slim minority. But, really, it's too close to tell - that's probably within the margin of error.

Of course, the story is going to be different at the local level, so I'll repost this for all your strategic voting needs.
Top

Which means all three of the major parties have now released their platforms, as has the Green Party. As far as I can tell, the Bloc has not released a full platform document.

You can read the parties' platforms (and, in the case of the Bloc, their policies) here:

I voted! It was actually super easy with the campus polling stations, even out of province. Well done Elections Canada.

I'm glad it was easy, too - I was worried that changes to Elections Canada under the Fair Elections Act might have interfered with on-campus voting.
Top

I have to admit I will not be voting in this election. This is mostly due to the bother of registering to vote overseas. Also, the fact that my home riding of Victoria is a mostly a NDP-Green race does not make me feel too bad about not voting.

Well, I can understand that. The rules surrounding expat voting are atrocious. They need to be changed; I want all citizens to be able to vote. Easily.

Still... it is a shame you won't be voting.
Top

I'm feeling kind of left out living somewhere where I cannot vote in election season. I've never done that before. I quite enjoy voting.

And Lord Chrusher, you should be able to vote in (some?) UK elections as a Commonwealth citizen - so don't feel too bad about not voting in Canada. I guess you just missed the most important election, but there are plenty coming up. Sadly Canada doesn't offer the same to fellow Commonwealth citizens.
I'm also QuintonDreaming. Stupid username availability prevents me from always being an Icelandic volcano.
Top

As far as Canada is concerned, Commonwealth citizenship does not exist.
Top

If you cannot vote on Election Day (October 19th) you can vote at advance polls, starting today. Check your voter registration card for times and locations.

If you do not have a voter registration card, you can check your riding, your polling place, and the times and locations for advance polls by entering your postal code here.

Advance polls are open noon to 8:00 PM on the following dates:

You must bring valid identification to the polling place to be able to vote.

Voter registration cards are not acceptable pieces of identification. You must have a valid form of ID to vote.

You can check if you are registered to vote here.

Should be noted, you can also go to your Elections Canada Office at any time and vote there.

I did a silly thing... I read some comments on an article about the niqab.

Well, look at it like this: the 'face covering' issue isn't an issue for Elections Canada - as long as you present ID, they're happy with you voting if you're showing up in a niqab, or even as a mummer.

Went out and voted at the advanced polls today. Really long lineups, it took me an hour to get through, and the line wasn't any shorter when I got out.

I voted today in the advance polls. My maid of honour didn't think we would have enough time to vote. We had so much time, we were 30 minutes early for the wedding. 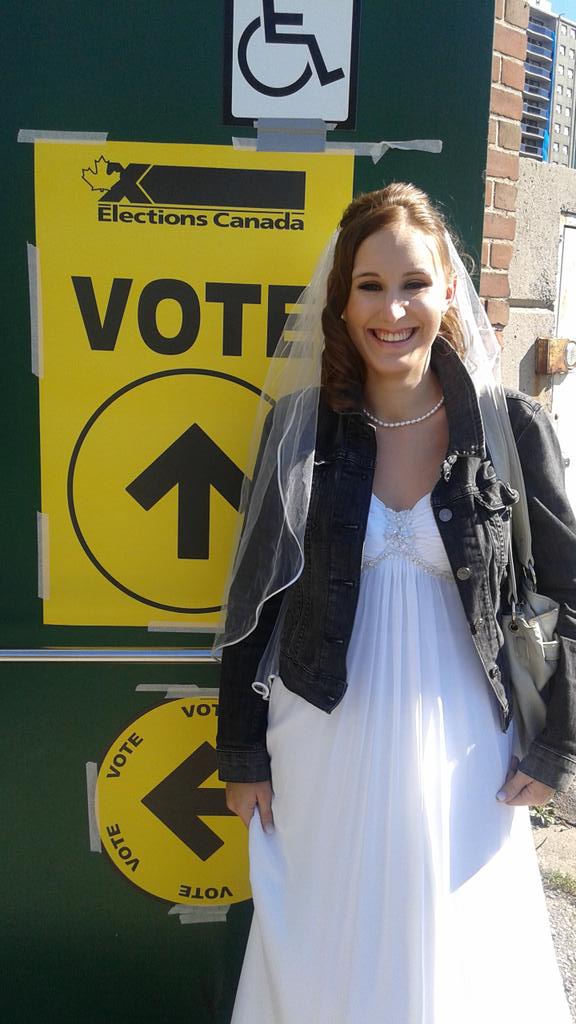 Note: we weren't allowed to take pictures inside, so we snapped photos outside once I had voted.
No trees were killed to send this message, but a large number of electrons were terribly inconvenienced
Top

I VOTED AND SO'S MY WIFE!
Top

If you haven't seen last night's CBC At Issue, you should definitely consider watching it.

I missed this when it first happened. The organization Up For Debate wanted to put on a federal leaders' debate solely about women's issues. It didn't happen, because of all the nonsense surrounding the debates this election.

What did happen, though, was that the organization sat down for in-depth interviews with the federal party leaders... except for Stephen Harper. He declined to participate. You can watch the interviews here.

(I haven't watched them yet; I'm currently slogging through the platforms. I'll get to them, though.)

Edit: Also, MinniChi? That is profoundly cool of you.

Okay, I know im pissing off fanboys by saying this but here.
Stephen Harper: NO. NO NO NO NO NO NO NO. YOUR ATTACK ADS SUCK AND THE BIGGEST COMPLAINT AGAINST LIBERALS IS THE LEGALIZATION OF WEED??? GTFO!
Justin Trudeau: The only reason im siding with him is because he took a pic of him next to a half naked girl at a gay pride parade. That... is the "we the people are together" kind of thing Im fine with.
Thomas Mulcair: Seems good on paper... problem is, so did the concervatives.
Elizabeth May: Sorry, after your stint where your handler had to take you off stage like a shamed parent picking up their drunk kid after the prom, I cant take you seriously.

Arclight_Dynamo wrote:What did happen, though, was that the organization sat down for in-depth interviews with the federal party leaders... except for Stephen Harper. He declined to participate. You can watch the interviews here.

Only had time to skim through Trudeau and Mulcair's, but I was surprised and happy to see Trudeau specifically mention GamerGate as something "we need people to stand clearly against." Not crazy about the way he put some blame for misogyny on "certain types of music," though.

And it bugs me that the camera keeps going a little out of focus.

Other than that, both of them seemed more or less reasonable, and given all the stuff that's happened in these spheres of the internet recently, nice to see them both adamantly insist that they're feminists. Trudeau sure comes off a lot more casual and honest though, where Mulcair feels like he's using more memorized stats and speaking points.

All in all, while I'm still planning to vote NDP because they're the far better strategic choice in my riding, I'm feeling more okay with the prospect of a Liberal victory than I was at the start of the election (Not solely as a result of these videos).
"Jamfalcon's a super weird name" - Graham

Meanwhile in my home riding of Vancouver-Granville there's been a whole kafuffle about the strategic voting site Leadnow.ca. Basically they made a recommendation that flies in the face of current polling and projections. And I didn't think my riding would matter...
Top

I must admit, I'm curious - what was this recommendation?
Top

Is Victoria still basically a race between the NDP and the Greens? If so I feel better about not voting.

So I'm watching the Up For Debate interviews, and I'm about halfway through M. Duceppe's interview.

Frankly, he's a disaster. Needlessly combative, not answering questions, being dismissive of concerns raised by the interviewer... basically acting like he's got a huge chip on his shoulder. Just come across as annoyed by the whole thing.

And now he's talking about Hitler. How... how did we get here, in an interview about women's rights?
Top
Post Reply
284 posts