Drop by and talk about anything you want. This is where all cheese-related discussions should go
Post Reply
9 posts • Page 1 of 1

With the influx of PC builds on the LRR team I thought we could get into the hype and show off new builds, old builds, awesome builds, crappy builds, or planned builds we have as a LRR community.

During the past months I have been checking materials for my new build as my old one was a goodie but very oldie
(Core2Quad/GTX650/DDR2) and was in need for an upgrade.
Ugly mess:
Click to Expand 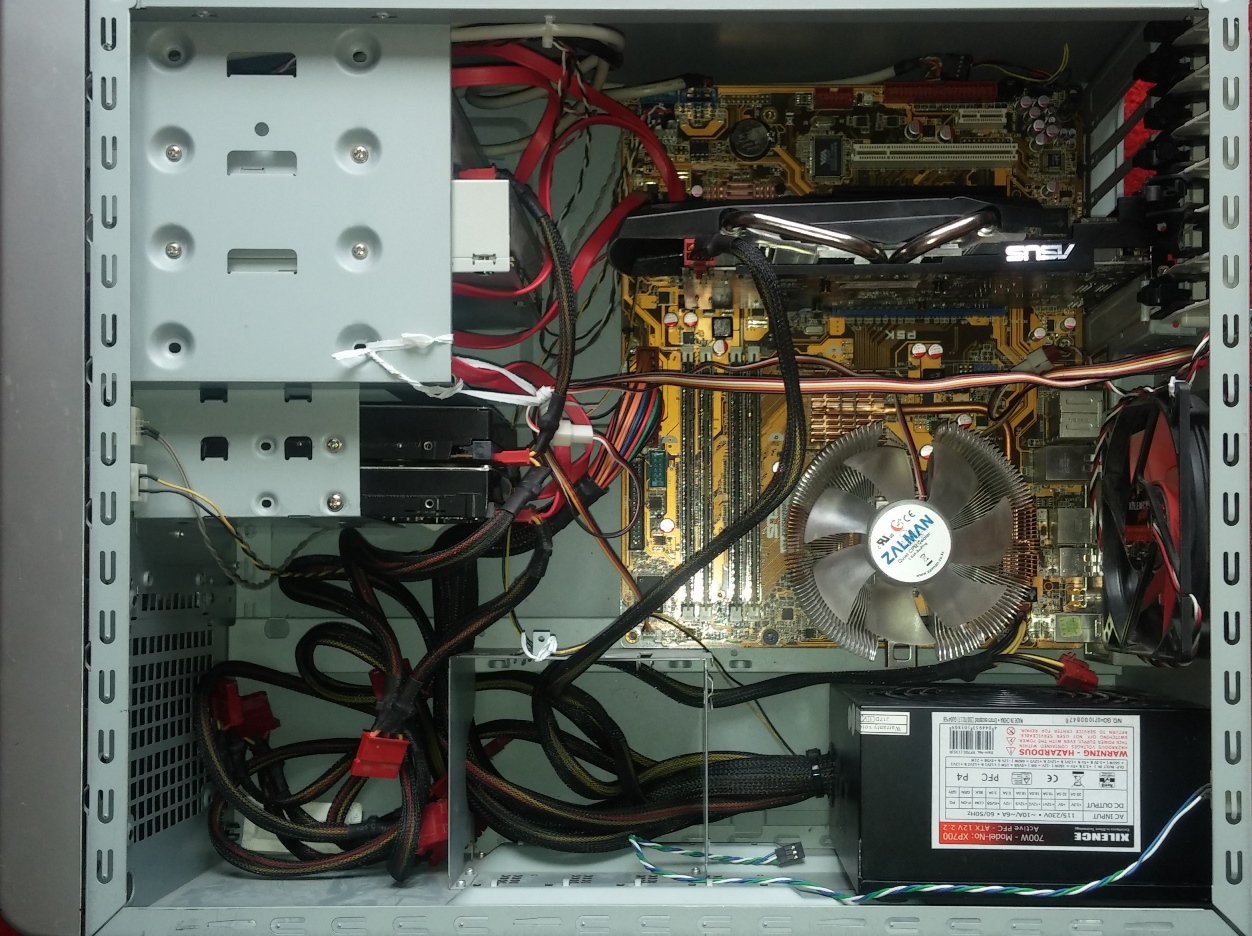 After a long search and some astonishingly good deals on my GPU and CPU I bought these components:
https://pcpartpicker.com/list/hKwv2R
and put them toghether (pics inside)
Click to Expand 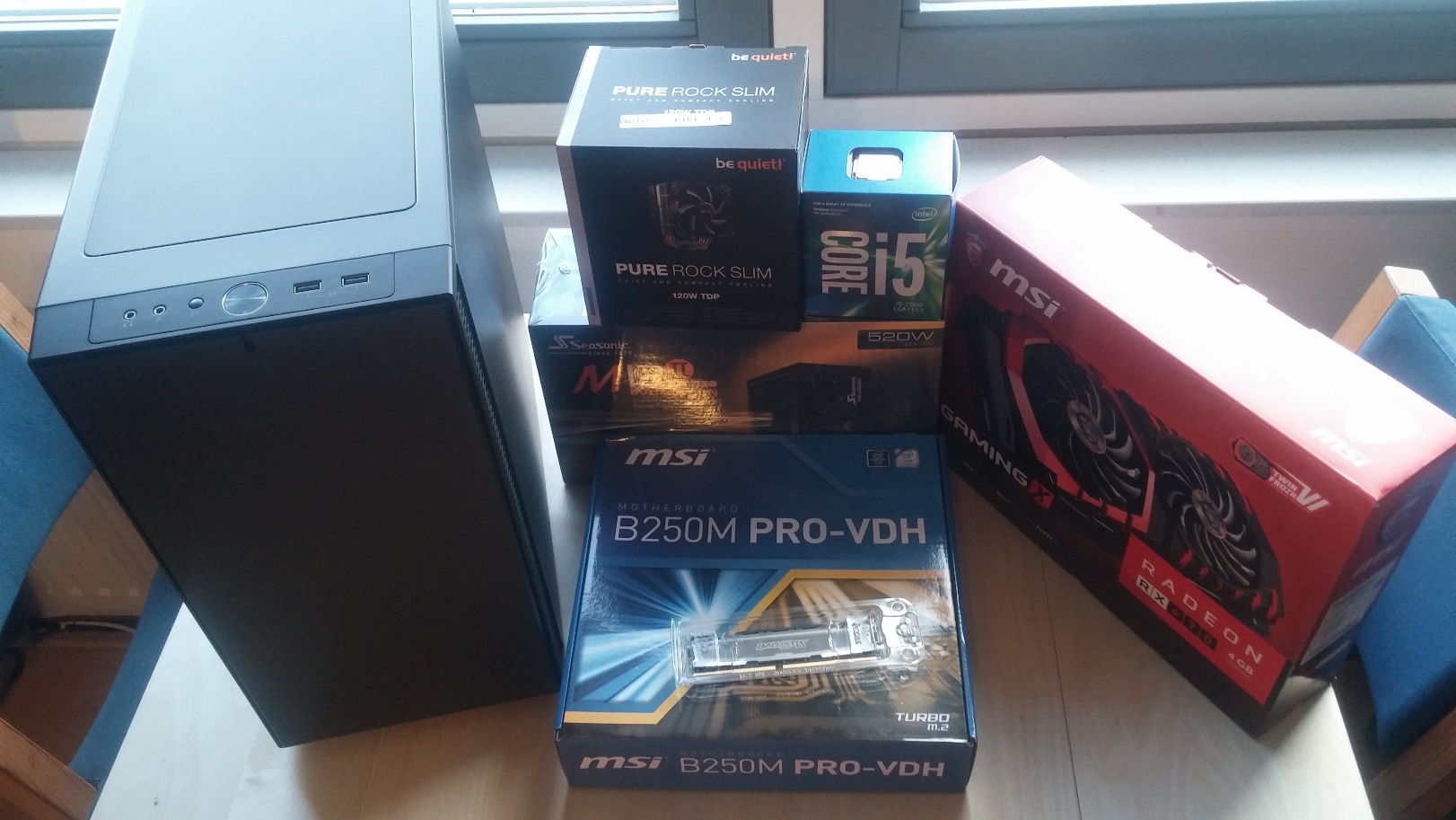 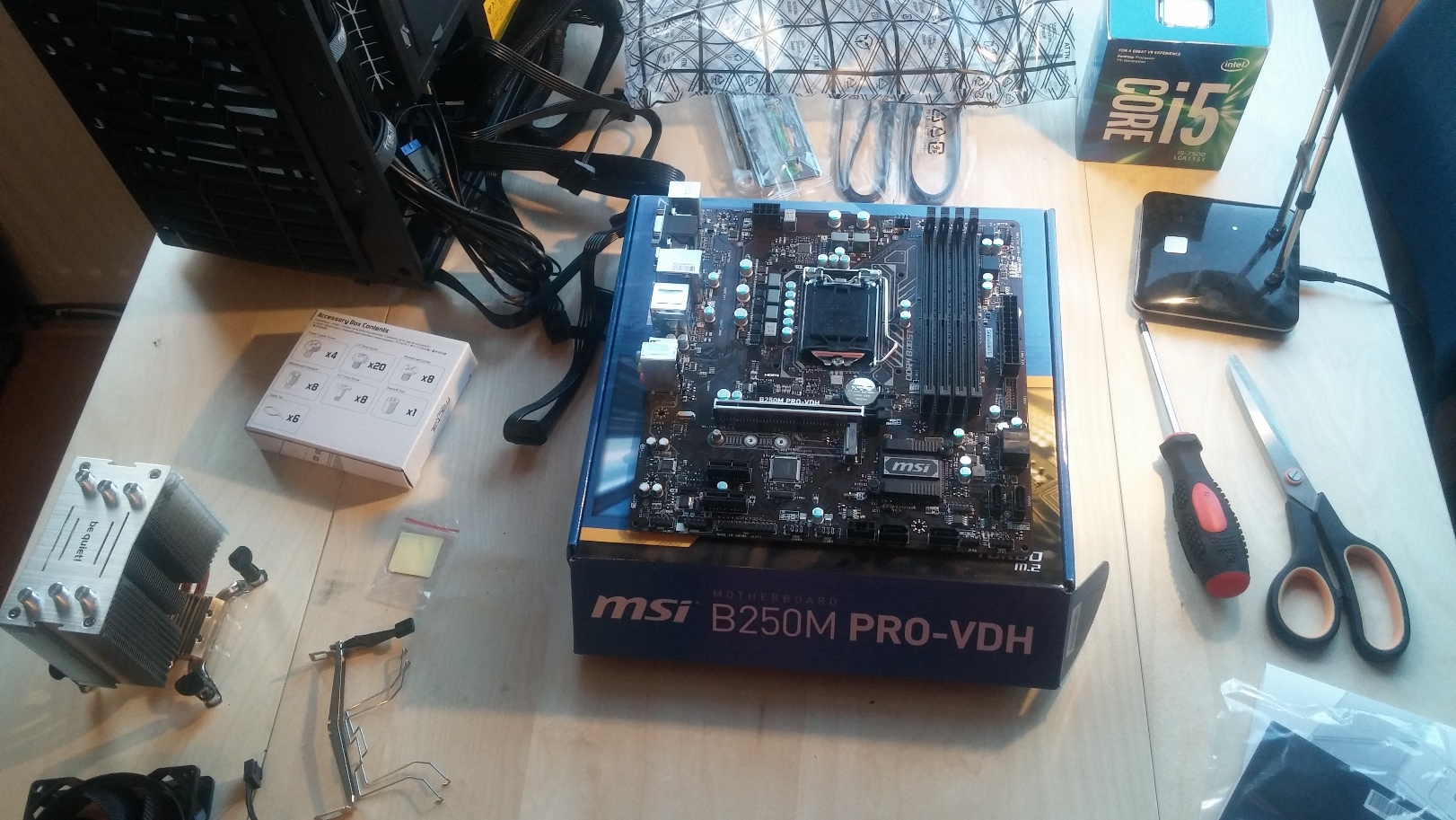 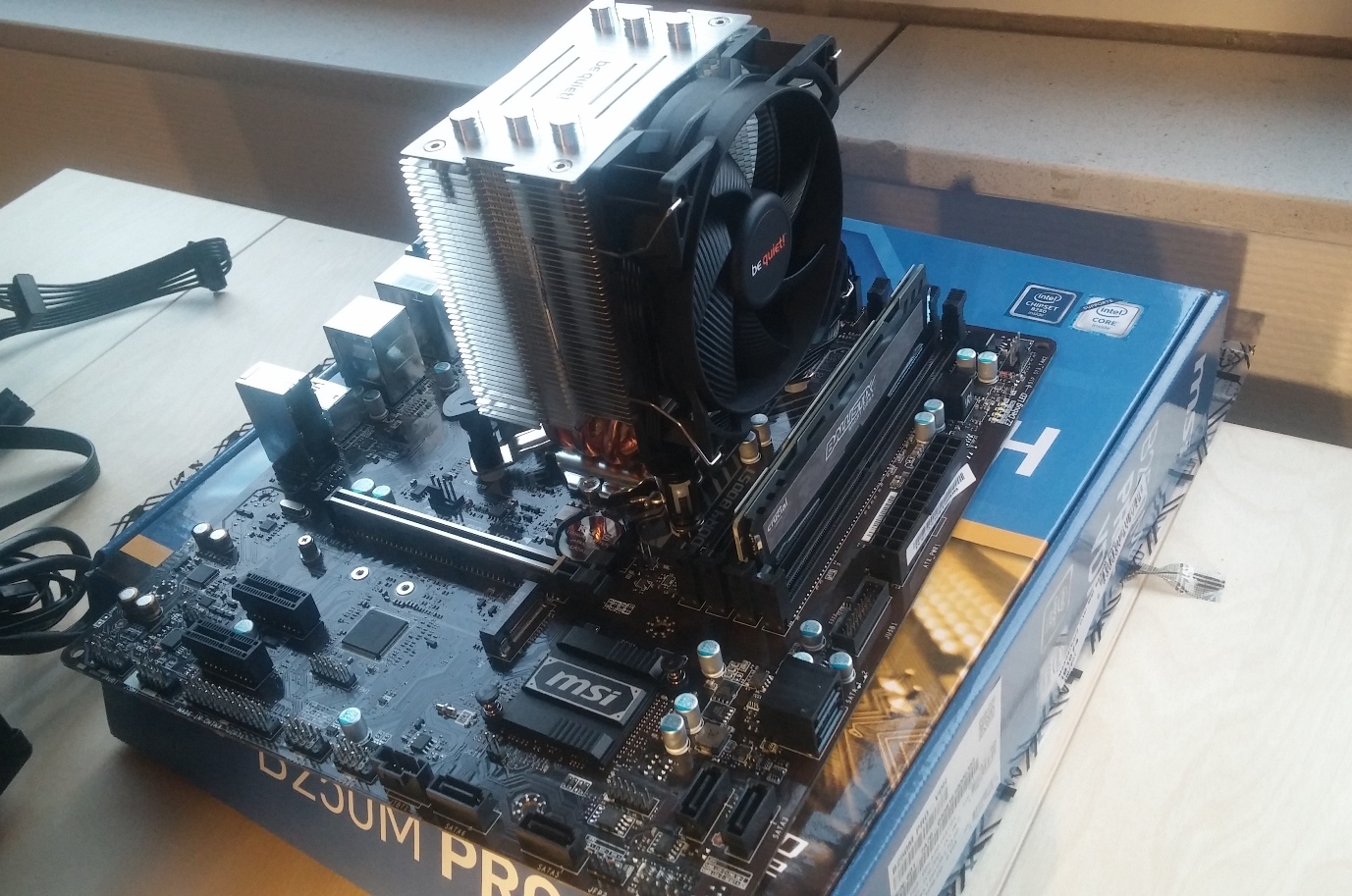 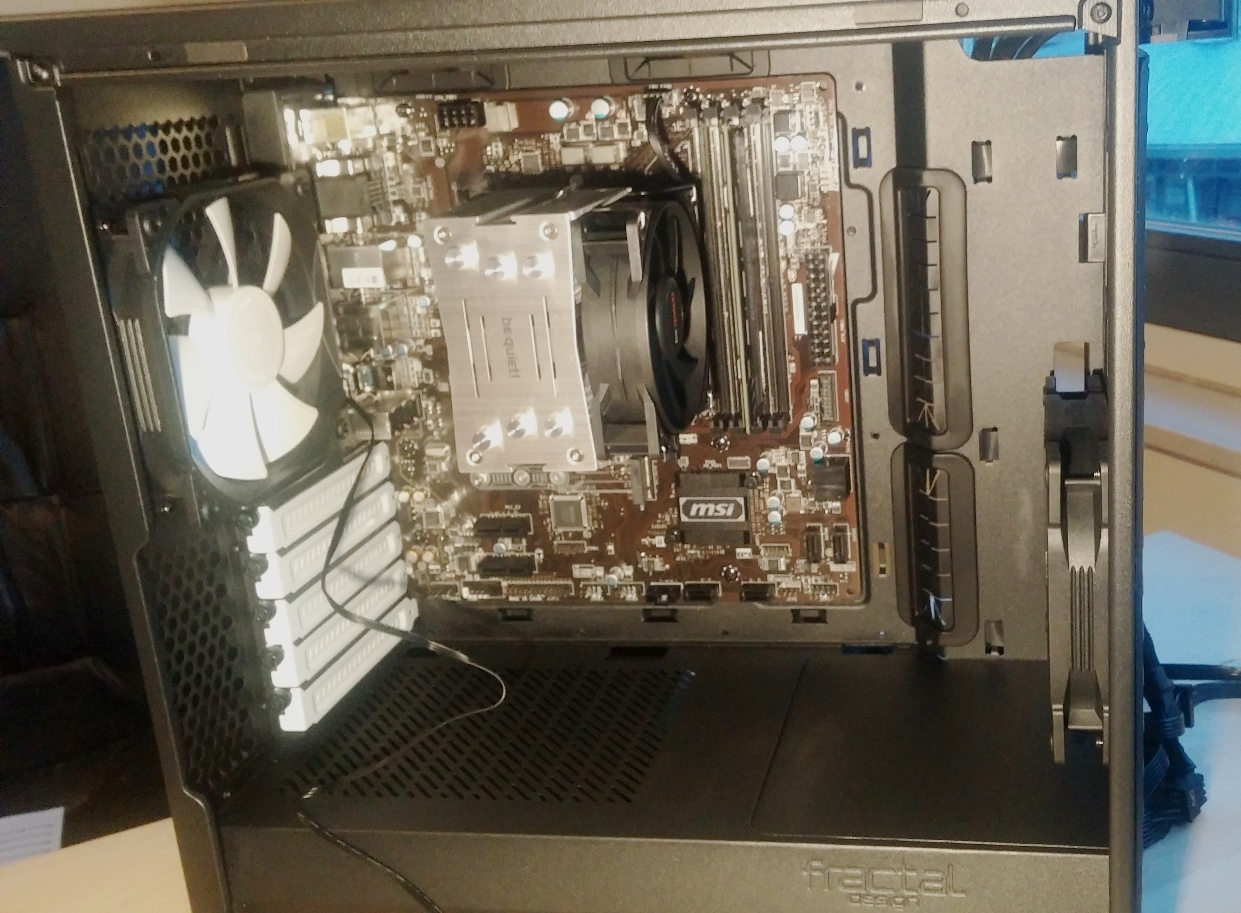 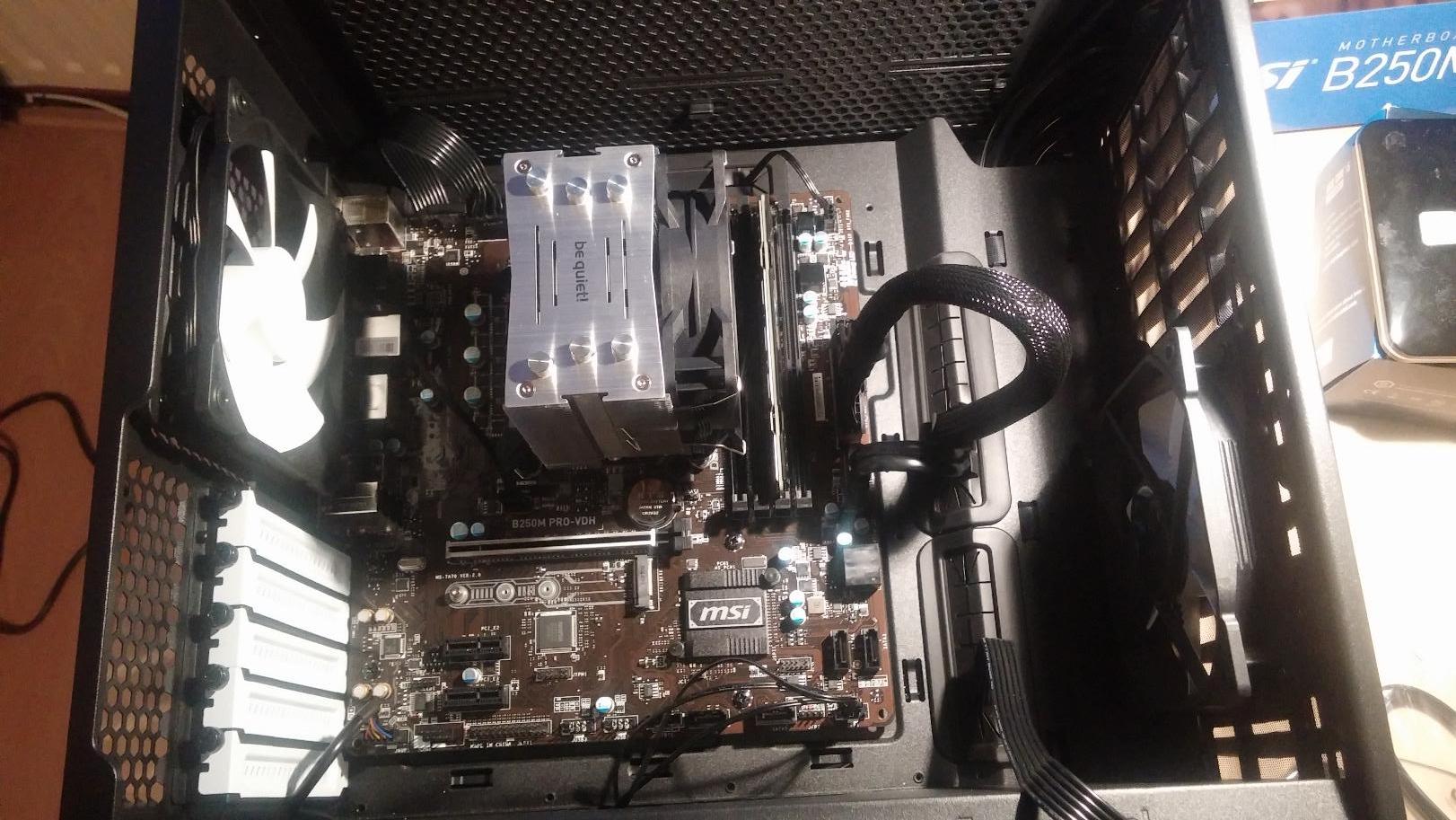 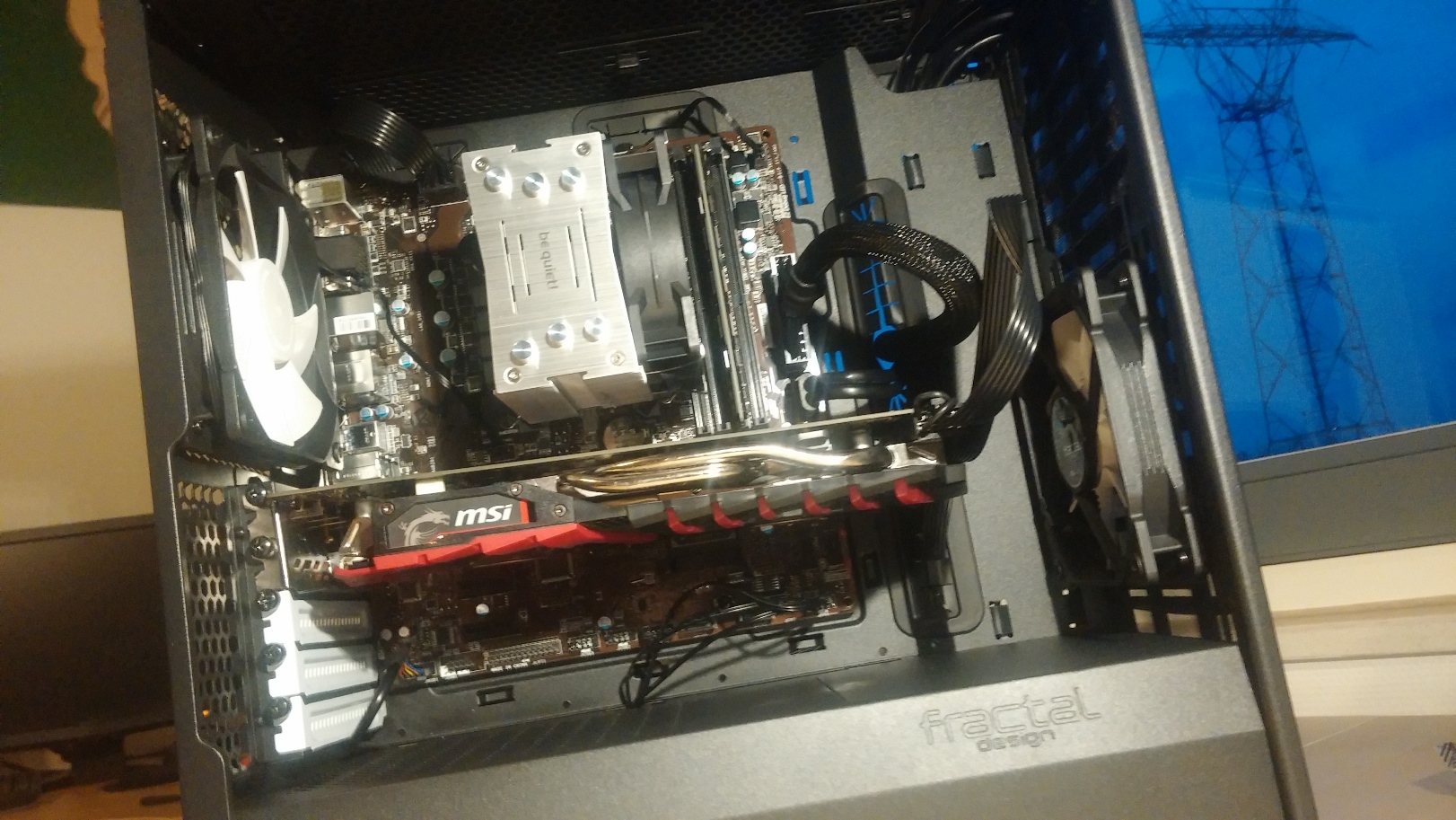 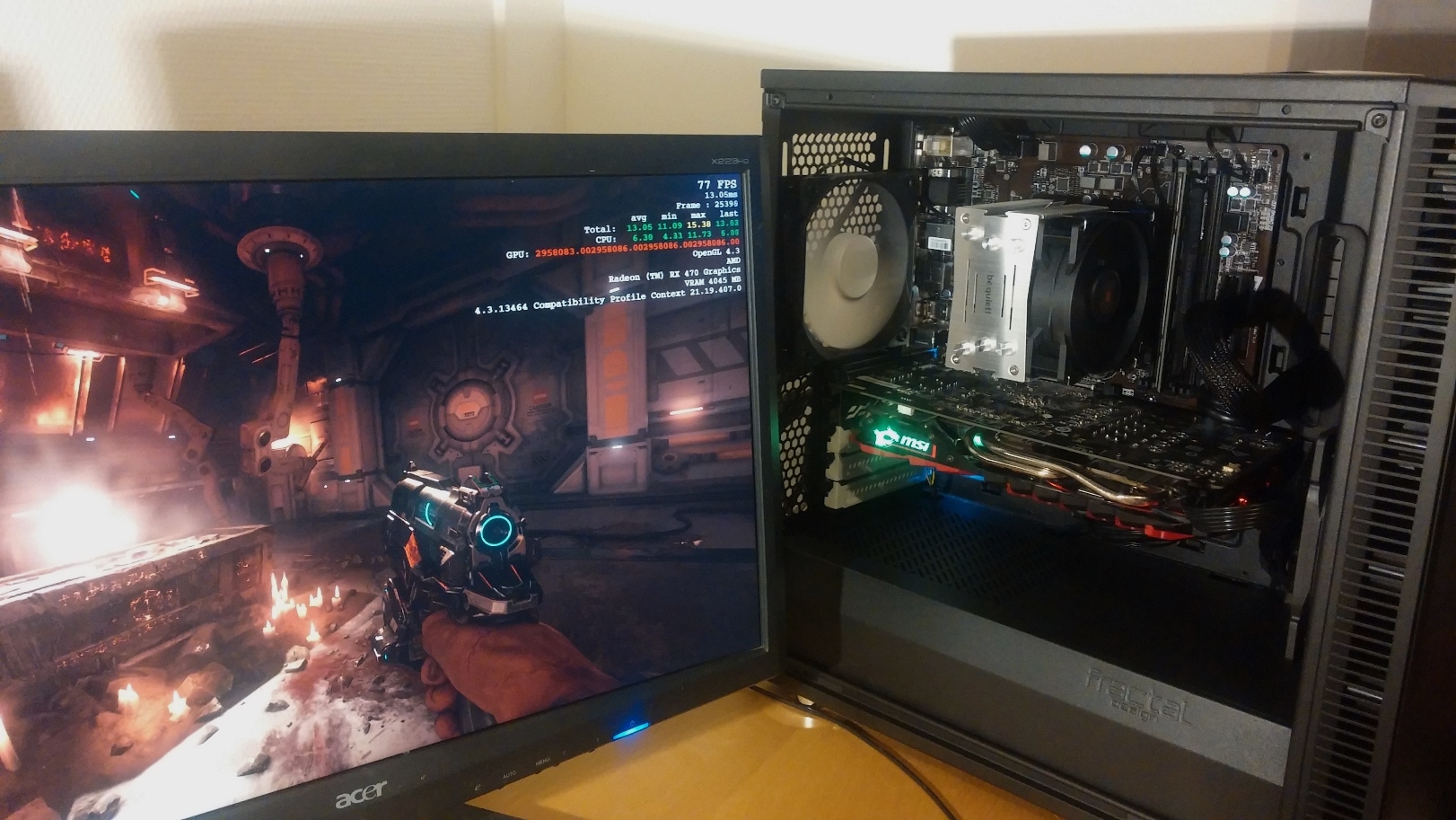 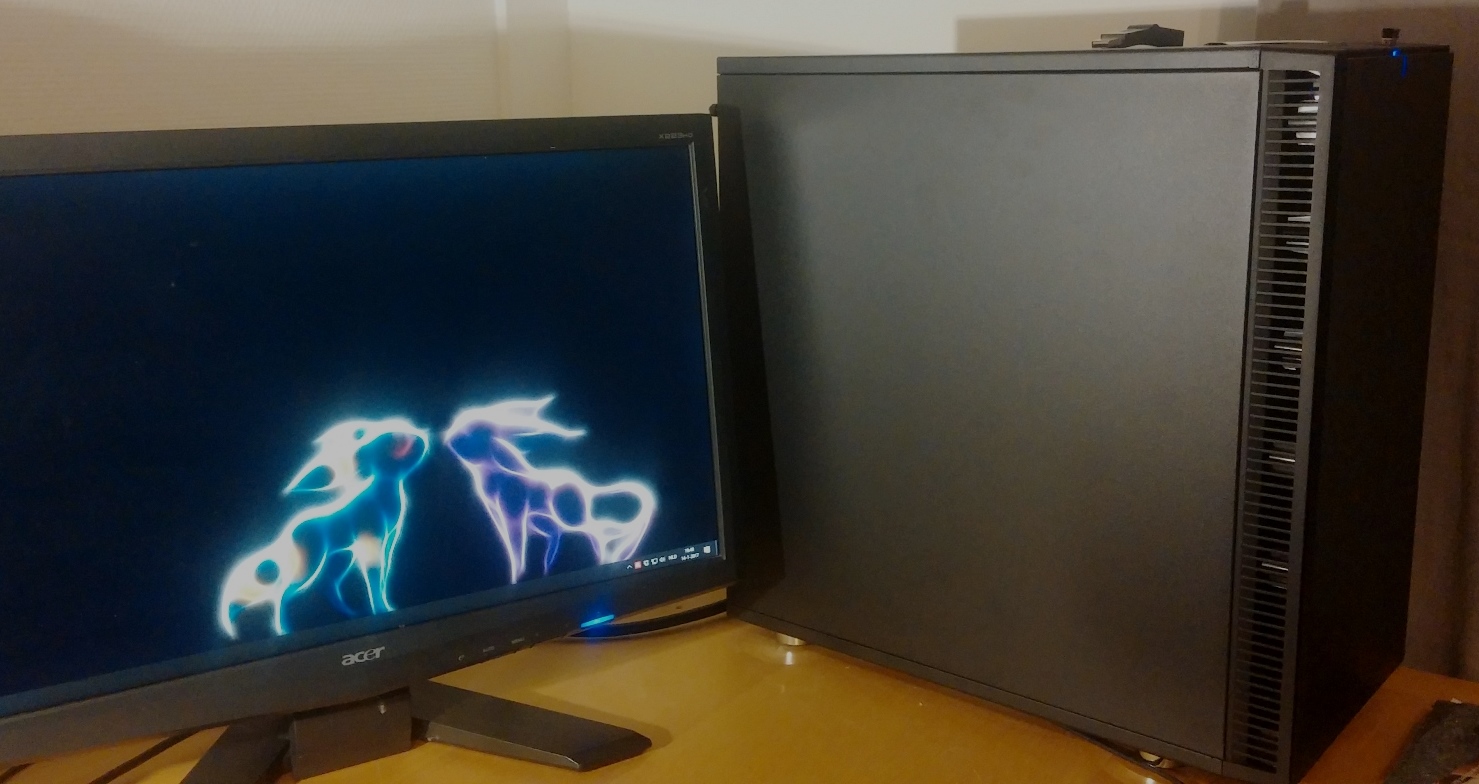 I loved the design of the case and while it is very small, I have so much room inside now and ready to join the master race once again

So, I would Invite you to share your builds and have a good discussion on them, maybe some helpfull advice might even be given

This is a good idea. I'm hoping to build myself a new PC in the coming months, but I know very little about how to pick the parts one would need.
No trees were killed to send this message, but a large number of electrons were terribly inconvenienced
Top

MinniChi wrote:This is a good idea. I'm hoping to build myself a new PC in the coming months, but I know very little about how to pick the parts one would need.

Go for the expensive, well-respected brands for your RAM and power supply. I suggest Corsair for both.
For Graphics and CPU, AMD is usually best, although if you're going really high-end, you'll want to compare the equivalent Nvidia and AMD graphics cards to see which is cheaper.
Chances are you'll want an aftermarket CPU cooler, as the ones they ship with can be pretty bad, but you'll have to Google around to confirm if the one that ships with yours will be good. They're usually okay, but it's worth checking(Mine ran at 60c idle. With my new cooler, it runs at 30c under load). If you go for an aftermarket one, I suggest the Cooler Master Hyper 212 Evo, although installing that can be tricky, and it's pretty big.

For monitors, you can probably get a cheap TV that'll work, just make sure its video latency is under 5ms.

YouTube and Google are your friends when building a PC. If you aren't sure about how to do something, there is always a YouTube video explaining in depth how to do it.

Chances are your PC will have something wrong with it when you first build it. My brother has built like 5, and he still always forgets a connector, doesn't screw something in quite right, or the graphics card decides it doesn't like the particular angle it's at. Whatever's wrong with it, you'll learn a lot in the process of solving it.

Anyway, I built the PC I'm using right now. I'll probably talk about it at length another day. Not right now though, I have a thing.
"If we hit that bullseye, the rest of the dominoes should fall like a house of cards. Checkmate."
Top

Anyone looking at building a computer should definitely wait until after AMD's new CPU and Graphics lines are released (Ryzen and Vega). There are no announced release dates yet, but they are expected to be out by the spring.

Intel and Nvidia have generally been dominating the mid-to-high end space for CPU and graphics cards for the last few years, but AMD's new lineup is supposed to be directly competitive against them once again - and bring along with it some much improved budget options.

This is what I put together in November:

Well I am finally on 4K gaming.

But damn, my speakers bring some loving. 120 watts of glory. I had 10 watt speakers for the longest time. Always thought "No point replacing them. They're not broken." 15 years later, they did. I honestly wish I made the upgrade sooner.

Now that I'm on 4k, I don't see the hype. Articles I follow show "Here's how THIS game looks on 4K!" It's nice but it's nothing to write articles about. I'd rather hear about the game itself.

For EU, and especially UK, Id recommend Ebuyer.com for ordering components. They always served me well.
---
oh, and while I normally go for nvidia,its worth noting if you want to keep your drivers upto date these days they force you to login so they can monitor your game usage. To provide a "better user experience" they claim.
You can still wait for a windows update to bundle the drivers, but it certainly piss's me off.

Imho, HDR makes vastly more visual difference. 4K to me is more noticeable for reading/still images then games or movies. I think just because your eye might be super-res at its center, but your brain still can only take in so much detail per frame.
http://www.fanficmaker.com <-- Tells some truly terrible tales.
--
Last update; Mice,Plumbers,Animatronics and Airbenders. We also have the socials; Facebook & G+. Give us a like if you can, it all helps.
Top

From what I understand, 4K only really makes a big difference when you can do the full HDR on an OLED monitor. (A lot of the time, LED simply means LCD with an LED backlight, it needs to be OLED for it to be a proper LED monitor)

I might very well be wrong, but that's the way I understand it.

In any case, I personally would probably more readily grab a 120 or 144Hz monitor than a 4K one. But damn are those things expensive.
"If we hit that bullseye, the rest of the dominoes should fall like a house of cards. Checkmate."
Top

Yeah, the thing about 4k is that even a 1080TI is only pushing 80ish frames on something like DOOM ultra settings. 4k 144 or 160hz monitors aren't really giving what they are rated for any they cost upwards of $1200 a pop. Yikes! Plus Windows disables HDR in many circumstances, especially games, which typically don't use the right color gamut to support it, and without proper software support leaving it on would be like staring into the sun.

I build my PCs with the aim of keeping them relevant for as long as possible, because mein gott the $$. My old desktop finally bit it (RIP Desky, Summer 2009-Summer 2017

So now I built a new desky. Pics when I get the chance! The collapsed sections are my thoughts on the different components after having spend dozens of hours researching this garbage and boring all of my friends senseless. They are sweary, because tech manufacturers are mostly being dicks.

Tbh I wish I could have waited for the AMD Threadripper 1900x, with similar core/thread performance but 128gb RAM supported vs 64gb, 64 PCI-E lanes vs an artificially handicapped 28 PCI-E lanes (fuck you Intel) for GPU/nVME SSDs (only SOME of the M.2 "gumstick" SSD's are nVME, others are still SATA3 which limits throughput to 6GB/s vs a PCI-E nVME connection which can hit 32 GB/s), but the AMD still $549 and probably has slightly worse single threading for games. Plus, Intel is charging an unlocking fee for nVME SSD raid. Eat Shit, Intel. (The ACLU brief for John Oliver makes me think this is legally OK to say)

AsRock Taichi X299 Mobo, Newegg, $290, came with a 2.5" 128GB HP SSD, which is not the boot drive but provides decent mid-speed storage
Click to Expand
3 M.2 x 32GB/s slots, 4 GPU slots, all PWM fan connectors, built in high quality (not quite bleeding edge but close) AC dual band wifi. $289, came with a free $128GB HP SSD that I'm using for extra moderate-speed storage. What more do you want for $289! Even with 28 PCI-E lanes on the CPU potentially reducing lanes for nVME raid SSD, as long as I stay with 1 GPU I should be able to raid 1, 0, or even 5 or 10 on nVME SSD's without cutting down on that sweet 32GB/s M.2 Ultra connection speed. Except I have to pay Intel an unknown amount sometime in the future for that privilege being unlocked. Eat shit, Intel.

2x16GB 2666 mHz Mushkin Redline, Newegg, $234. RAM prices are out of control!!
Click to Expand
My friends who had built a PC in the past few years paid under $150 for 32 GB. The reason is a 3d vNAND shortage from Samsung and Micron, i.e Sun-Micron, (which is apparently still a thing! I thought they Blockbuster'd); the shortage supposedly resulted from both companies new 18 and 17 nm manufacturing processes having poor yeilds and the increased demand for smartphones, which now have 6 and 8gb of DDR4 based on the same chips. Except those two same companies + Sky-Hyinx (this would be #2 of the big 3 vNAND producers) have been taken to court multiple times for collusion, and were actually convicted of creating an artifical shortage following a fire in 2009 and a flood in 2011. Multiple large South Korean companies including Samsung were implicated in the corruption scandals of impeached South Korean president Park Geun-hye, who is now in jail for influence peddling, bribery, corruption, etc., and I suspect Sky-Hyinx is not above this shite as well. More importantly, these companies are posting record profits as RAM prices are soaring, which means that extra cost is just extra profit. So Intel doesn't get to eat all the shit, Samsung and Micron can eat some too.

Phanteks Enthoo Pro Series, Titanium Green, Newegg $70. Came with a Phanteks 200mm & 140mm fan in front and rear. I am utterly thrilled with this case.
Click to Expand
Rubber grommeted openings on the Mobo plate and velcro straps behind the motherboard plate for perfect cable management, out of sight. Mmmmmm. And that's just the start. Air filters all across the front, top, and rear. Given that I live with 5 people and 5 pets, this is a must! Included fans are decent, PSU cover looks nice and manages heat, has 4 out-of-the-way 2.5" SSD mounting spots plus 6 completely removable 3.5 bays. 7-fan PWM fan control hub hides fan cables, compensates for short fan cables, and provides better RPM modulation for 3-pin non-PWM fans. Comes with 50+ extra screws in a neat plastic organizer, which I LOVE. Green is almost black except in the direct sun, which is sweet. MID-tower description seems ridiculous, this thing feels huge

Boot drive, scavenged 128 Toshiba m.2 nVME SSD, which a friend replaced in their laptop. Seems fine until something like a Samsung 960 EVO 1 TB doesn't cost $450.

Overall system cost: ~$1614 plus $28 rush shipping, boo Express PCs trying to sell things that aren't in stock Maybe closer to $2000 if we include the value of the monitor, speakers, mech keyboard, mouse, webcam, etc, but those were all transfers from old Desky.

Infinitely curious what a streamer/video producer heavily involved in the tech side, possibly Graham and definitely Paul, think of the new Threadripper 1950x CPU at $1000, and computers built around it. It crushes Intel's $1700 i9 1950x in any multi-load, comes in a MUCH cheaper overall package across mobo+processor+4k monitor, can simultaneously stream, play and render 4k (with enough GPUs) according to what I've seen. Seems like a slam dunk to reduce cost on a single system, reduce the number of systems saving space and money, and also reduce cabling & networking.
Top
Post Reply
9 posts • Page 1 of 1