Sorry for the late thread, we've been struggling with some connection issues.
Top

although it does raise one or two questions which i think have to be addressed by the appropriate people:

1. is there a thread or place where we can submit our own stories for feed dump (such as my favourite story about bristol county council's zombie outbreak information guide)?

2. does a wig count as a hat, and if so will this skew the hatistics for the episode?

3. dead graham. is this a new theme which will require its own statistical analysis?
Twitter|Google+|Tumblr|Facebook|Steam|Skype: gmbridges

Unless drugged food in the oh-nines is a joke I'm not getting.

In other gnus, good episode!

In other news, a Russian expat in Montreal started the viral parody campaign "I Would Shed My Clothes For Poutine," in which the Quebequois are urged to walk nude to their local eateries and demand free servings of the French-Canadian delicacy.

I love this show, but after analyzing it with a team of engineers, they quickly came to a consensus on increasing its quality in the future. Their report went as follows:

Alex had me rolling in industrial laughter, top form indeed!

Kathleen definitely needs to work on her pronounciation of Russian names, they sound nothing like that

Hello, everyone, and welcome to the Hatistics Report. I’d like to personally apologize for the delay in our report. We were delayed by a lion. Yes, an escaped lion. That’s my story and I’m sticking to it.

And with that out of the way, let’s look at the hatistics. After last week’s … wonderful James force, happily the market responded more to the familiar Alex and Kathleen forces this week, although Alex’s refusual to honor past treaties remains a weight upon the hat market, which dropped to 15%. (Not 14% as some early predictions called for; Alex, you sneaky bastard. Field reporter Duckay caught your stealth hat in the final minutes before market close, and we will not be made monkeys of here at Action 9 News.) 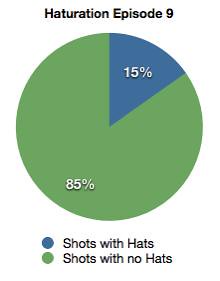 This has some investors delighted, with the prospect of hattrition or haturation both firmly squared away. Others, mostly hat investors, are dismayed by the drop. But they’re the kind of people who’d have rejoiced that James was there, so to hell with them. They want to know what a drop feels like, they can talk to me. So they’re not happy, and I don’t care.

You know who else isn’t happy? The Church of HatlessHatSpectacles who just last week had built an ark. Yes, an ark. Like Noah’s. Never mind their own theology claims the world will explode in a fireball caused by the logical contradiction of hats and no hats, and for some reason prescription eyewear. But as we can see from the following chart, the awaited confluence of elements failed to occur. 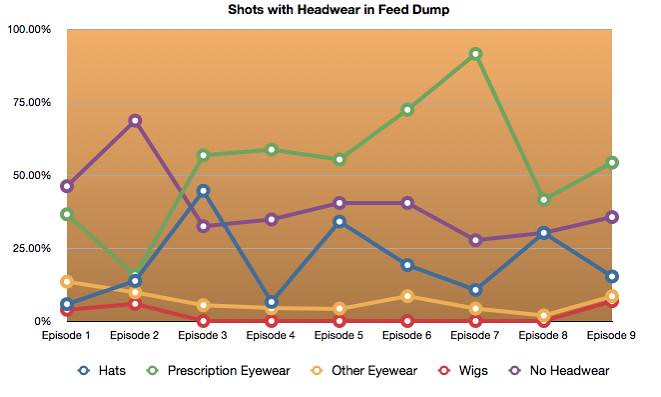 Instead, we seem perilously close to a confluence of hats, wigs, and non-prescription eye-wear, which will bring about the dreaded nobody cares about it. As far as I know, no religious group claims such a confluence will do jack or shit. Wait a moment... Hey, Iamafish? I’m right on that, right? No church worries about that? Yeah. I bet by the end of the week, one’s sprung up.

Also, good work you wigs and NPEW investors. Your market is so volatile that a Wayne’s World reference can send your shares soaring to never before seen heights. You are braver men than I.

Until next week, when we will have a special report with new graphing info, I’m JackSlack for Action 9 news.
Top

Hell yes, those Wigs shares were so cheap and I was so happy to be able to sell them for a massive profit today.

I think the russians really dropped the ball on this one. I'm sure "shed your clothes for Putin" lost some charm in translation, but I doubt it was as catchy as Poontang for Putin.

A return to the wig phenomena of episodes one and two!

And Alex's stealthy hat. I'm onto you!

Geoff_B wrote:2. does a wig count as a hat, and if so will this skew the hatistics for the episode?

Wigs are their own category and have been since episode 3 when this whole silliness began.

3. dead graham. is this a new theme which will require its own statistical analysis?

Nope. Graham being dead is not in fact a form of headwear, and is thus not a hat market.

That said, I seriously considered starting a costume and prop index, but for now I'm sticking with hats, glasses and wigs.

Although, for the curious? Kathleen's piggie ears counted as a hat.
Top

well as far as i'm aware this is the fourth time alex has killed graham by breaking his neck. There may be more that i haven't come across yet.
Twitter|Google+|Tumblr|Facebook|Steam|Skype: gmbridges

Are we counting Crapshots? I think those lie outside the mainstream continuity of such.

Did anyone else watch the Tear Your Clothes Off for Putin video? I don't speak Russian, so if I had seen it with no context, I wouldn't have assumed it was a political ad because it was clearly a commercial for Apple.
Top

"Carl Sagan of Butts" is my Flock of Seagulls cover band.
Top

I have to say, I'm loving Feed Dump more and more. Is there any chance of seeing Kate get involved?

Also, how many forumites bought that Doctor Hoo t-shirt Graham's wearing? I know I got one for me and one for my other half, I think Cuppa got one, anyone else?

If/when Kate appears, it will likely cause an explosion in the non-prescription eyewear market.

Master Gunner wrote:If/when Kate appears, it will likely cause an explosion in the non-prescription eyewear market.

We here at Action 9 news consider the likelihood of a Kate force in the market to be minimal, but it did occur in Phailhaus simulations and it is agreed it would be likely to be catastrophic.
Top

On another note, the actual episode itself was pretty fantastic. I'm really happy to see the return of Kathleen's PFotW. Maybe we should talk about that a bit instead?

As if there are people who don't eat it that way.
Top

you're right of course. silly of me.

Wait... you say headwear... what about earrings and/or other facial paraphernalia?
*
Top

Once again, an awesome episode. Next time you need a word to replace news, how about "Some Hues". And things get all colourful and stuff.
Deviantart: Psycat-Aurora
Instagram: @psycataurora
Tumblr: Psycat Aurora
Twitter: @Psycat_Aurora
Top
Post Reply
47 posts