Talk about this week's LRRcast and what you'd like to see in future ones.
Post Reply
58 posts

Here you go. Its up!
Top

10 minutes after I posted. I love you.
Wil Wheaton says "Game over, Moonpie."
Top

I can hear you!
And the traffic is audible but not overwhelming.
Top

I vote that future podcasts be restricted to four people at most.
I require a dance of intellect. Put on your thinking shoes!

Graham, no job? Are you on scholarship right now?

Podcast shouldn't be restricted to four people, but a system of talking could be put in place so we don't hear all of you at the same time.

I asked that question when I didn't know. Also, you're lucky Kathleen doesn't listen, but now she should, because she missed out.

Thanks for moving the mic, Matt might have hurt my ears.

James, I think you meant FORMERLY not FORMALLY in your sig.

Great podcast, little lame that I was the one who asked the game franchise question and I was not named, but I'll forgive you for great answers.
--OmegaZultan--
When the world ends, Bill begins.
Top

Well seeing as there was a whole Celebrity Look-alike thread before (see here), this may not be too hard, but for acting abilities and personalities, it gets harder.

I'd like to correct what was said in the podcast in that what NecroVale and I said was that we've tried the ice cube suppository, it does not work.

The description you guys gave during the podcast was spot-on accurate, though, down to the last... everything. So now, if you've heard the podcast, you can imagine exactly what it's like to shove an ice cube up your bum.

To get any real effect, though, you do still need 2 or 3.

matt wrote:I'm fairly sure Morgan will have sex with the tailpipe at some time.

So Morgan's going to join the ranks of the people who have sex with cars?

Oh, now I see how it could work with women!
Deemed too hazardous for human contact.
Top 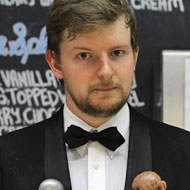 Both have boyish good looks (so I hear) and are capable of being serious and strong (shirt guy/Bourne) but are also capable of playing the goof up (Oceans 11). 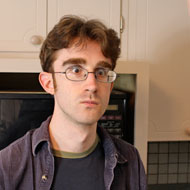 While always on the forefront of a video or movie, they excel at keeping the mood light and setting up others with their dry attitude. 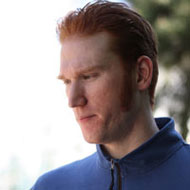 Aside from the obvious red hair and height, both men are able to suffer personal pain if it results in a good laugh for us, while maintaining great style and poise. 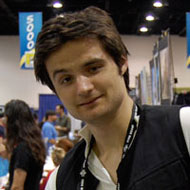 They know that if something is not funny, then they must make it funny, by sacrificing themselves in any demeaning and embarrassing way (Underpantaloons/ Deuce Bigalo) 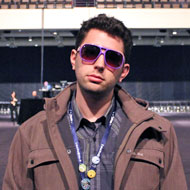 Both are capable of being very funny on their own, but really shine when backing up others with quick jokes. 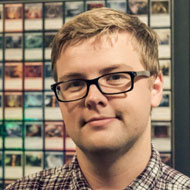 Always in the background, improving every scene with amusing statements and one liners, and always doing a great job of acting a myriad of different roles.

Serious roles, with a light hearted edge. They create believable characters who do not crack jokes, but who create amusing scenes for us to enjoy. 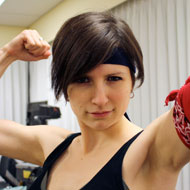 Strong women who do not fear speaking or doing whatever they feel, and this appears in their comedic roles where the jokes come quick with excellent timing and charm.

Alex: ?
Still working on figuring someone for you... I'll sleep on it.
Top

DO A BARREL ROLL, MORGAN

Graham: John Cleese
Both of them are the progenitors of great comedy groups. Both have directored and starred in their own films, and have unique comedy styles that are very hard to reproduce.

Paul: Randall Munroe
Although Munroe is not an actor, his comedy stylings of www.xkcd.com just remind me of smart and witty things that Paul probably thinks about and keeps to himself.

Morgan: Sarah Silverman
Although of the opposite gender, Silverman captures Morgan's manly essence and utilizes it in female form. If Travolta can pull of an overweight lady, Silverman can pull off an overhorny man.

Matt: Josh Peck
Sadly, I like Josh Peck. I think he's a great slapstick comedian and is often the butt end of jokes in roles that he plays, which is very similar to Matt. Jer: Steve Carell
Both of them are funny because of their body language as well as their literal senses of humor. I think Carell could pull of a pretty good Jer.

Kathleen: Jeneane Garofalo
Both are straight talking women who speak what's on their mind, and have a great sense of humor.

Alex: Vin Diesel
Alex brought DnD to the LRR Forums, and his IRC game that I played once was pretty fun, which caused me to play it with my current roleplay group in real life, so I credit him to bringing me into DND. Vin Diesel has played DnD for over 20 years, so that's a big similarity right there. Both are big into roleplaying, and I'm sure Diesel could do Alex justice.

Alright, I know you guys want us to participate in the contests, but damn. This one took a lot of effort.

Edited once for aesthetic enjoyment.
Edited twice for Leary's inclusion.
Last edited by CyberTractor on 19 Jul 2007, 21:08, edited 1 time in total.
I can't think of a signature.
Top

Morgan: sperm do indeed pass through the prostate. :c(
I require a dance of intellect. Put on your thinking shoes!

but i saw this guy in arrested development

I was going to do conan for bill, but ryan looks more similar.
i dont know what's happening anymore
Top

Don't be so jealous of Jer... as stated, it has been uber hot here in Colorado.

Paul: Randall Munroe
Although Munroe is not an actor, his comedy stylings of www.xkcd.com just remind me of smart and witty things that Paul probably thinks about and keeps to himself.

And he teaches us to fear velociraptors. I love that webcomic. And here. And here.
Wil Wheaton says "Game over, Moonpie."
Top

Hey, hey, how about Do not mess with the kid who is taking thermodynamics right now.

so wait, I got Opie's balding younger brother...?

One played a king on the silver screen, the other is king of the computer screen. But can YOU tell the difference?

For a long time, I just couldn't think of who would be the best Paul for the LRR movie. Then Steve popped into my head and I thought that it was a pretty good match. Especially when Steve acts like Michael Scott with the voice and energy of Hammy.

The tall funny guys of the moment. I feel like Titus and Watt can deliver the same results from their respective experiences.

Though CyberTractor has already made this selection, I have to admit that I too feel that Sarah and Morgan are very similar in style and humor. They practically connect at the brain. As you see in the picture, she also feels so well-rounded.

They both look quite a bit alike in certain pictures, and everyone loves James as they love Raymond.

They are both short big-boned comedians with a dorkish quality to them that makes them both endearing and off-putting. I don't really know why I chose Hugh for Jer. It just seemed right to pair them together.

Both funny feminine ladies with major talent in acting, DeVere and Tilly both have stunning looks and are ready to take on any interesting role, from Tilly's bisexual mobster wife in the Wachowsky brothers' BOUND to DeVere's furry-pimping entrepreneur in NUNTASTIC. Fun Fact: According to imdb.com, Tilly is a graduate of Belmont High School in Victoria, BC.

Because Alex is a big part of LRR, though he may be the foreign correspondant, he is like Christopher Walken's cowbell: we just want more.
Last edited by tak197 on 19 Jul 2007, 21:10, edited 1 time in total.