Well yes, I believe that's a good solution in the short term, but I still think some building up around there should probably be done. Especially since completely fresh players that still have the Guest tag can't even defend themselves if they go wandering around. So yes, I'm volunteering to help out developing spawn some more, if DarkMorford and the rest of you are ok with that? Especially since apart from the good work being done in the spawn house, and a couple of portals, not much has been happening there.
Top

Tsunami84 wrote:Ok, I don't know how to say this but the ender lily farm got hit by a creeper and needs attention, rcarddz just walk out of spawn and got hit by said creeper.

That rcraddz guy is a right pain in the rear.

If we could somehow tether them to an area, maybe some iron golems too.

We would also use Jiyuulia plants (from Botania) if we can automate some mana generation.
Top

How do people feel about building a second wall around the spawn area, to enclose all the new structures? How big do you think we should go?
Top

Well Bower laid out a sample size of what we where thinking, we're happy to put in the work on it too.
Top

I just thought I'd let those of you who were kind enough to refrain from sleeping while I was on, I am no longer a vampire so sleep away.
Top

Does anyone mind if I kill the ender dragon, as I need its heart, I have a way of resurrecting it, as I like anyone useing draconic evolution will need many hearts
Top

And the server is down again...
Top

I think the slaying of the Ender Dragon should be an event for the server to do together.

As a temporary measure, I've fenced in and lit up the area we've built in so far. It's just a basic cobblestone fence, so it's easy to knock down as we expand, but hopefully it'll prevent creeper griefing for now.

AdmiralMemo wrote:I think the slaying of the Ender Dragon should be an event for the server to do together.

Ok and I understand the reasons for that, it's just my progress, will basically grind to a halt without the hearts.

*Edit: Also a thought occurs, with everyone being from all over the world how would we coordinate that.
P.S. This is for the Infinity Evolved server.
Top

Mercano wrote:As a temporary measure, I've fenced in and lit up the area we've built in so far. It's just a basic cobblestone fence, so it's easy to knock down as we expand, but hopefully it'll prevent creeper griefing for now.

I was also thinking of flattening the area inside the boundaries to make further construction of spawn buildings easier, I've mostly been holding off just in case someone gets annoyed at me for doing so

Bowerbird7 wrote:I was also thinking of flattening the area inside the boundaries to make further construction of spawn buildings easier, I've mostly been holding off just in case someone gets annoyed at me for doing so

If we do plan on doing a fancy wall where the cobble line is now, can we leave this outcropping? I think it would be cool if the wall ran through it. 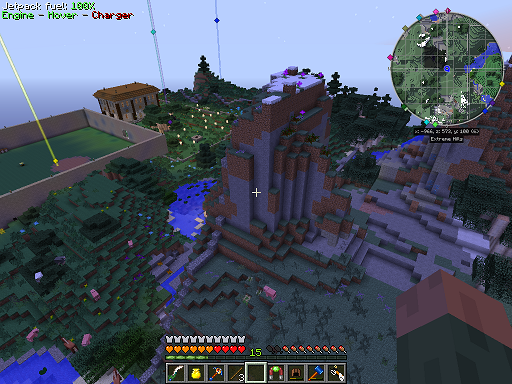 Hey everyone, how exactly do I download the mods needed to get on the new server?
Top

Sky_rider19 wrote:Hey everyone, how exactly do I download the mods needed to get on the new server?

You need to google and download the Feed the Beast launcher, should be easy enough to find, launch it, it'll have a selection of modpacks, you want Infinity Evolved version 2.3.5 (Currently). Once that's installed and launched you'll need to exit out again, hit the button labelled "Edit Mods" and enable Chicken Chunks (Which should be the only available option), that should work.

Now, onto something important for DarkMorford's attention, the server's been having near daily crashes and brief rollbacks (deleting anything being recently used or built), which has already cost me my high-tier Thaumcraft wand, one of my late-tier items I had just finished making, and Tsunami84 two fully constructed Tesseracts. I can only speak for myself and to a lesser extent Tsunami, but this is incredibly frustrating, to randomly just lose a not-insignificant amount of work and resources. All I can really do is make you aware of the issues in the hope that they're being looked at, and potentially request some help in getting said items back? So far we've lost 2x Tesseracts, an Eldritch Eye, and my Void-Capped Infernal Wand with a Focus of Nine Hells...
Top

Add to that, a silk touch ender quarry upgrade, though that's not hard to replace, and for those counting that was the second crash in less then 24 hours.
Top

So, about that ender dragon on the ftb server ...
As Tsunami84 posted the ender dragon has a crafting reagent for Draconic Evolution. It is also resurrectable. The more a player resurrects the dragon the more difficult it gets. For these reasons I propose the following:
* You can kill the dragon if/ whenever you want
* If you kill the dragon you have to setup a ritual of draconic resurrection, but not activate it. (http://www.tolkiencraft.com/draconic-ev ... urrection/)
That way people doing their first dragon kill still get a simple dragon fight.

On the point of doing the dragon fight together: In modded minecraft the dragon fight is far from epic (you can two shot it with the right gear ...). As such I don't think it makes sense to make it a group event.
Top

Oh... If the dragon is resurrectable... then there should be no issue. I was thinking that it's like vanilla and is one-time only.

Any plans for the Vanilla server to come back online soon in time for 1.9?
Top

Is LRRMC offline as well, now?

It went offline about a month ago, for reasons unspecified. Hosk asked about it on the last page:

Lord Hosk wrote:Does anyone know what is wrong with the vanilla server?

No idea what's going on, and nothing has been said in this thread.
Top

After the CtS, I'm wondering if we maybe want to have a hostile map somewhere for the LRR community to play?

Although, given the talent here (no, not me), it might get crushed too quickly.

Regarding the FTB server, the restarts lately have been a result of the server running out of RAM and getting killed by the operating system. Fortunately, CreeperHost has an auto-starter in place when out-of-memory errors occur, so the server is usually back up within 5 minutes, but I understand the frustration.

I've upgraded the server to have 4.5 GiB of RAM, which appears to help, but it does not solve the problem. I'm working with some of our more knowledgeable players to try and locate the issue, but there are a few other things that can be done.

The obvious (if naive) solution is to simply throw more memory at it. However, the latest upgrade has put me at the limit of what I can afford on my own, so any further improvements on this front would need to be supported by donations. I hate asking for money, but that's where I'm at.

Secondly, I'd like to prune the number of Mystcraft/RFTools dimensions that we have, as those are notorious for using a lot of memory. Please let me know if you have any dimensions that you're okay with deleting, and I'll get those cleaned up. In the same vein, it would be helpful to reduce the number of loaded chunks, so please limit your chunk loader and world anchor use to only what's necessary. PortalGun portals also force chunks to load, so I'd appreciate it if you could clear up portals that you're not using.

Another option that I've been thinking about is making a custom modpack just for this server. This would allow us to include mods that the players want (I personally would like to see Morph and PneumaticCraft in there) and remove the ones that are boring and/or laggy. There's a lot of fun that could be had with this, as well—we could define our own recipes and progression similar to Infinity Evolved's Expert mode, or set up an HQM book with LRR-themed quests. Perhaps the coders in the group could even make a LRR mod; the possibilities are endless. This isn't something that I'd implement right away, as it requires testing for balance and such, but it's something I'd like to get people's thoughts on.
Last edited by DarkMorford on 22 Feb 2016, 19:15, edited 1 time in total.
http://www.twitter.com/DarkMorford

I miss the vanilla server...