Talk about what you are playing now or join in with one of our forum games.
Post Reply
237 posts

What I'm most excited about is the sub-assembly function. Mainly because it makes Project Space Bus for Hope a lot more feasible. 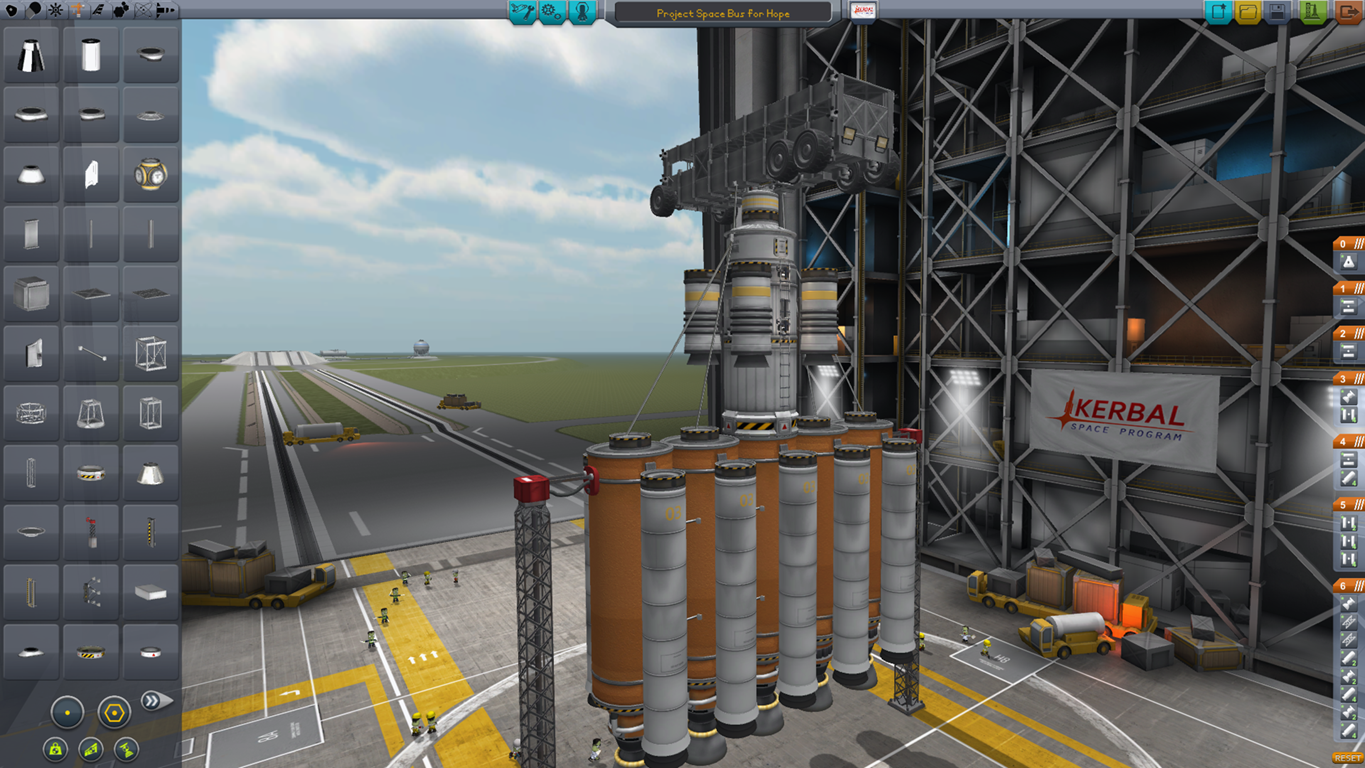 I've got a video on the Career mode coming out tomorrow, hoping to keep it as an occasional series of "build rocket, fire rocket, learn science, build bigger rocket" videos and just sort of see where it ends up.

So far it looks really smooth, I'm enjoying how straight-forward and easily-integrated to standard gameplay it is. And being forced to use all the parts by virtue of few alternatives is delightfully refreshing since I'm having to risk lives that I usually try to keep out of harm's way using robotic probes.

And yeah, I've been having fun with this mode as well. Kind of "relaxing" actually, since I'm not trying to build multi-orange-tanked monstrosities to huck my space station parts into orbit!

And a challenge: on the very first mission with a bare capsule on the launchpad, beat my score of 29.9 science.

This week on the continuing adventures of Project Space Bus for Hope: Crashing Falling with style. 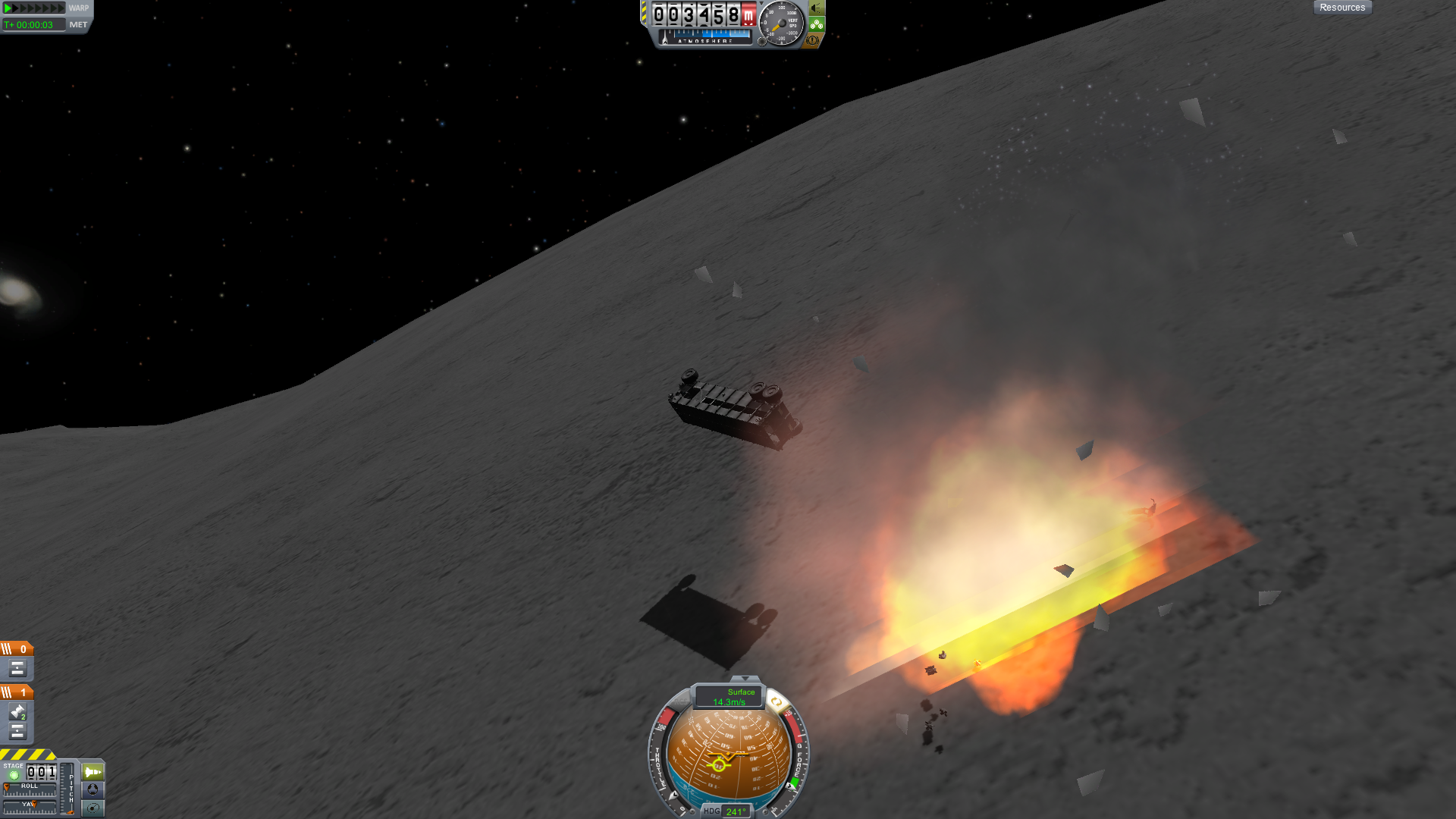 Stuck the landing though, even though the lander stage ran out of fuel, blew up and killed everyone. 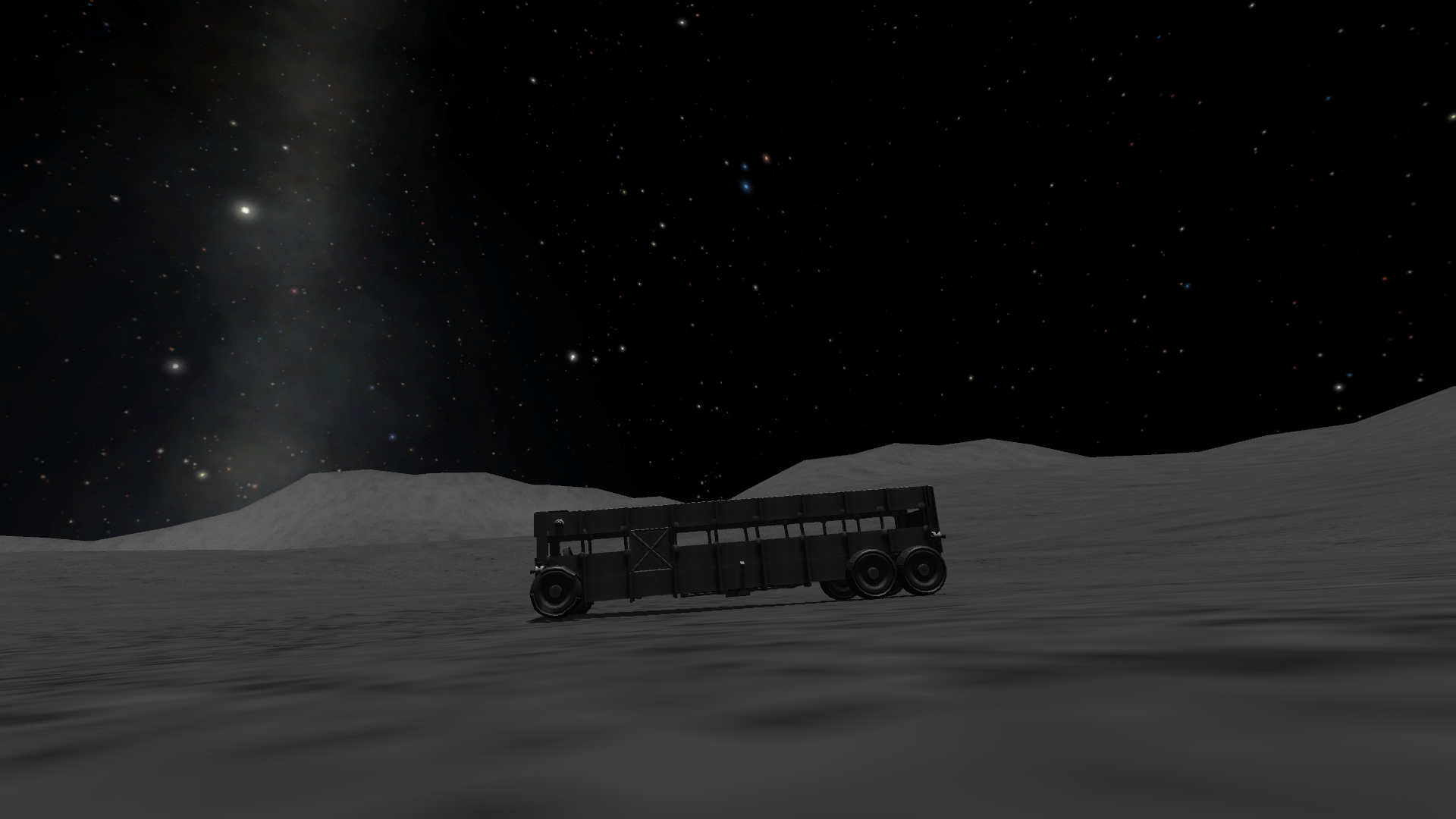 Still, that's what I get for letting Matt Kerman drive.
"We're not on this asteroid for very long, let's be nice to one another." - Alex Steacy

You should land on one of the lakes on Minmus instead; easier to land and it helps simulate the lack of terrain in DB.

Unless you land it in the desert on Kerbin.
Deviantart: http://warran.deviantart.com/
Tumblr (Not NSFW anymore): http://thesmeggyone.tumblr.com/
Top

You're not wrong, thanks for the suggestion! Houston, the Bus has landed: 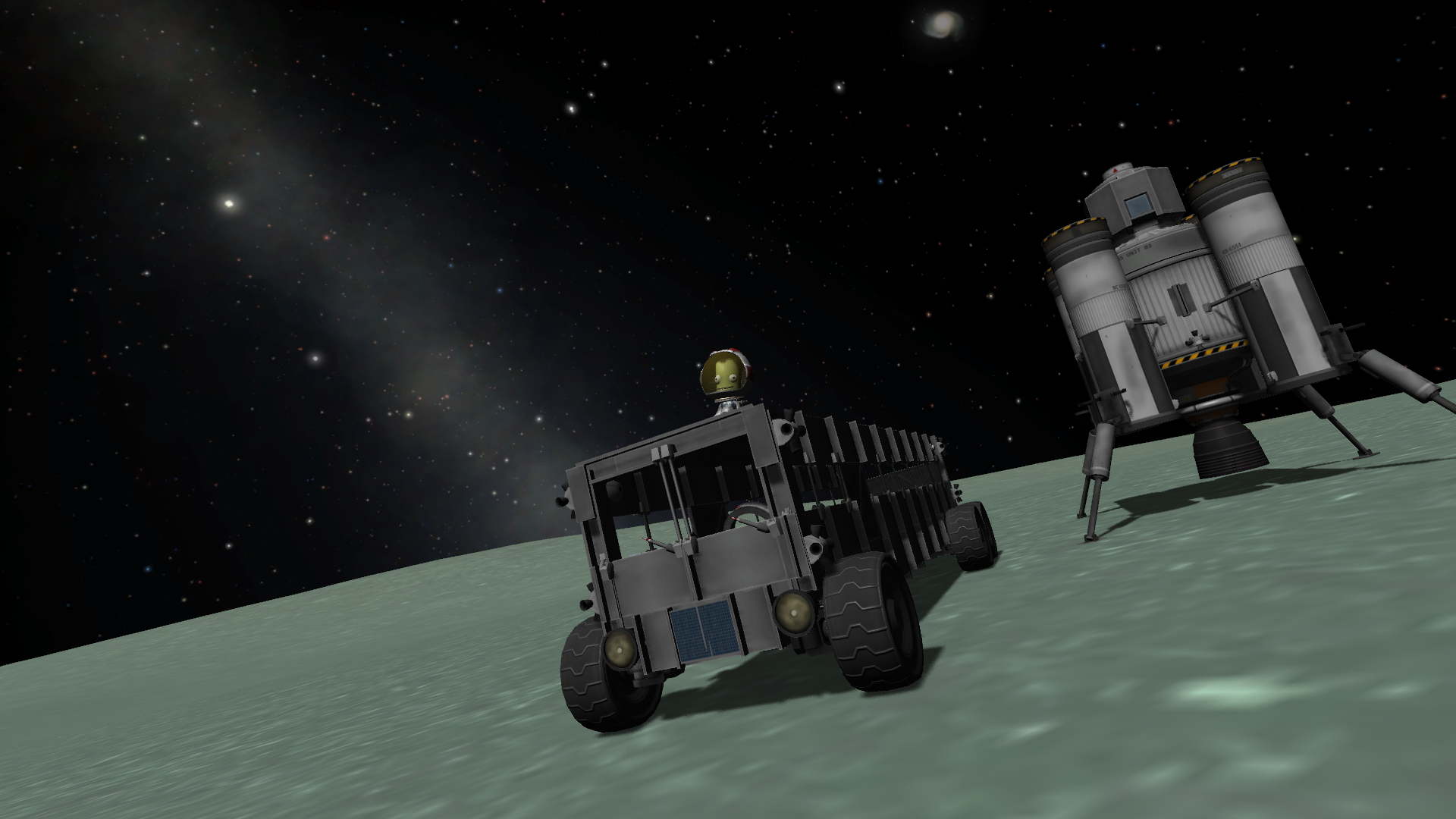 Today your driver is: Heldon Kerman 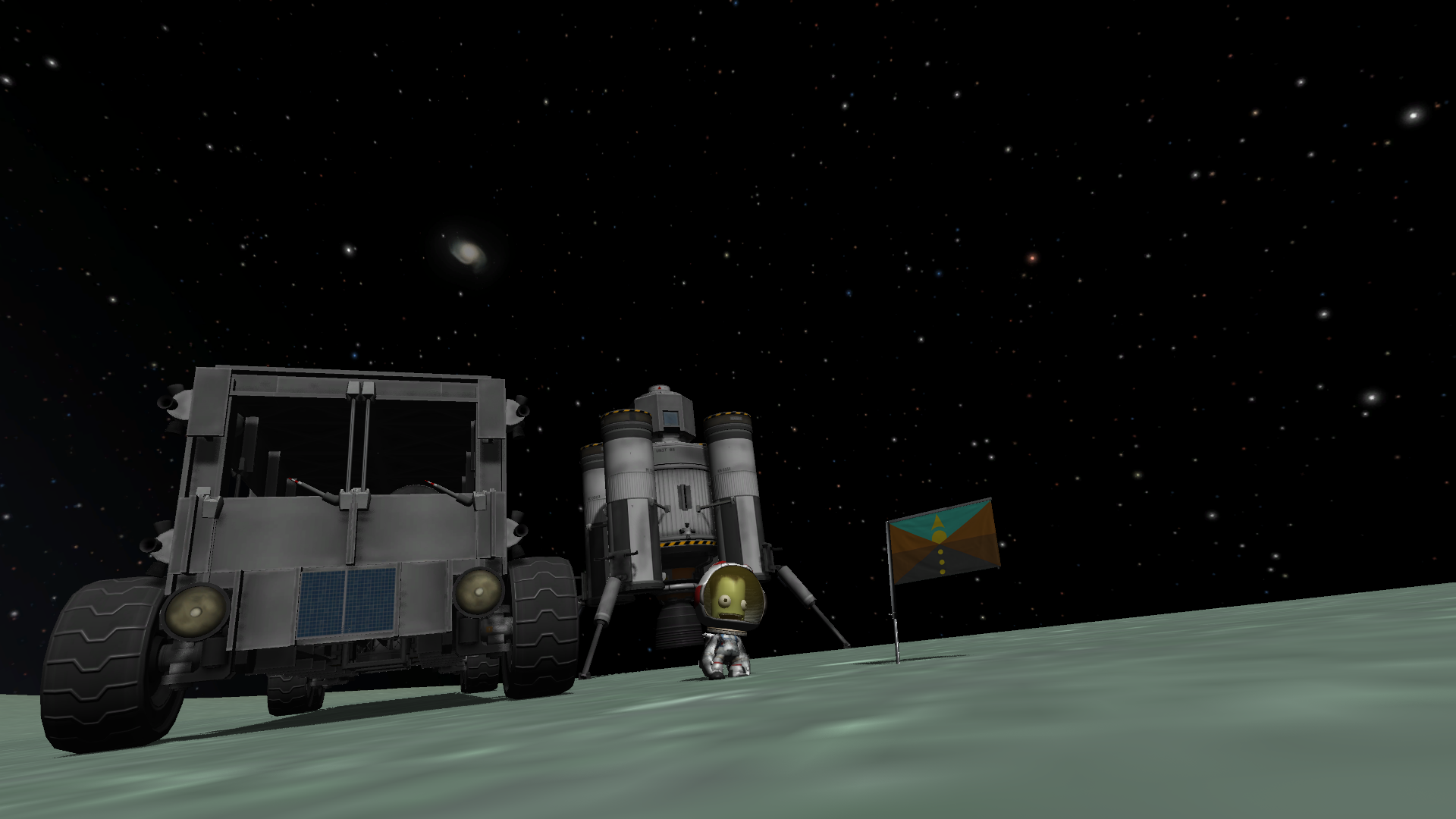 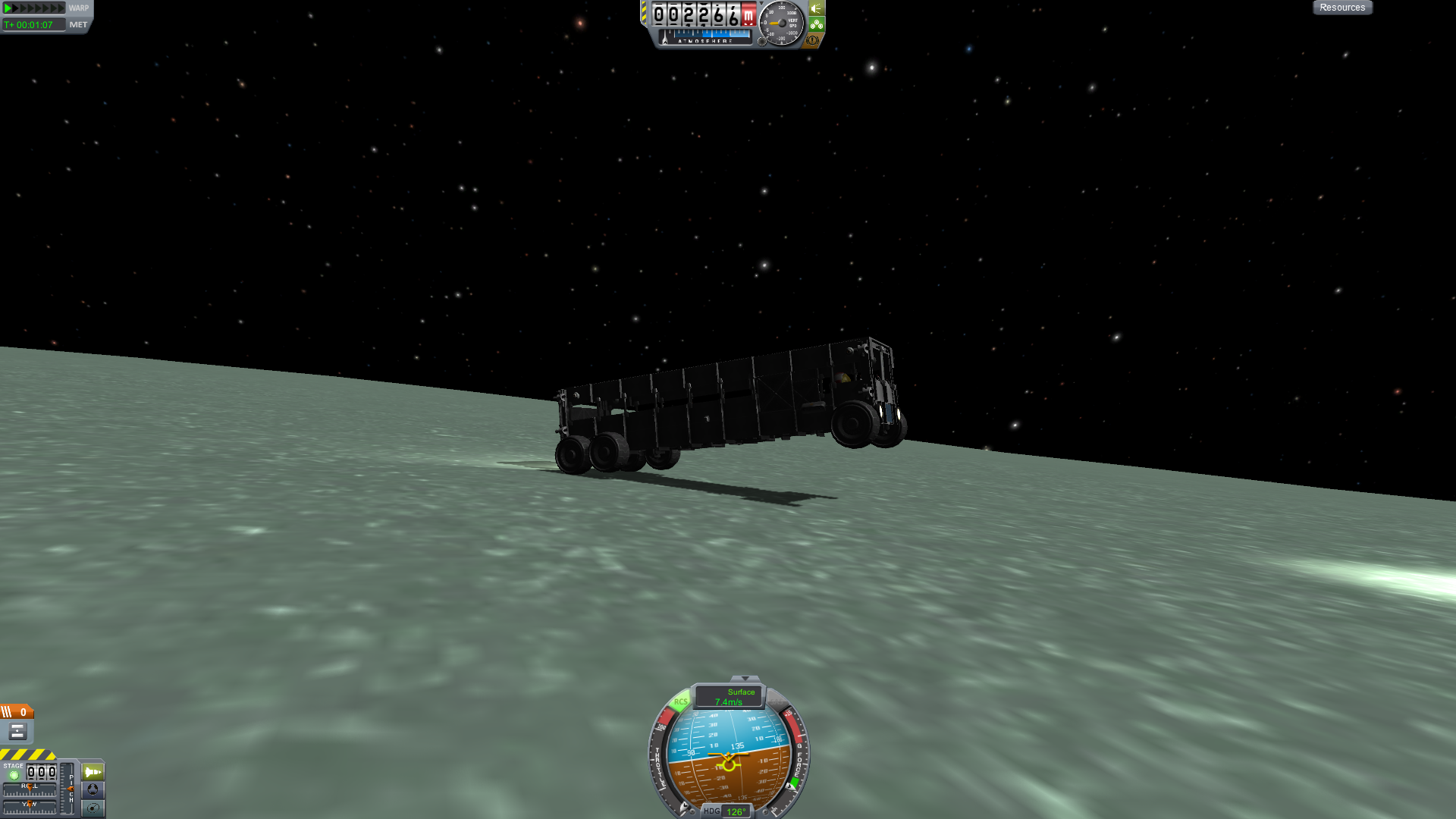 Next stop: The Mun, for real this time.
"We're not on this asteroid for very long, let's be nice to one another." - Alex Steacy

I have to admit, career mode is a lot more addicting than I thought!

Don't suppose you're willing to share the .craft file for that bus, Hats?

There is now a multiplayer mod. It was just released so there is some heavy development going on right now, but there are a few servers set up already. I'm working on a server list website right now.

Master Gunner wrote:Don't suppose you're willing to share the .craft file for that bus, Hats?

Sure thing! The Bus itself goes in the SPH rather than the VAB, but you can use it as a sub-assembly since there's a connection point on the base.

The launch vehicle isn't perfect, I've still not been able to land on the Mun even though Minmus is no problem, so let me know if you improve it or come up with something else! I'm determined to get that Mun landing.

As a bonus, here are some LRR/DB flags that I've been using: 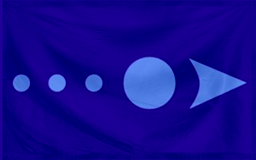 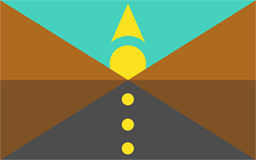 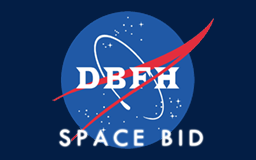 Is there an attachment point on the top as well? For landing the thing, I imagine a skycrane system would be much easier to handle.
THE DUTCH!! THE DUTCH AGAIN!!!!!

Dutch guy wrote:Is there an attachment point on the top as well? For landing the thing, I imagine a skycrane system would be much easier to handle.

Not at the moment, but that's something I've thought of doing. Problem is, due to the way KSP handles structures in general and sub-assemblies in particular it was easier to build the bus from the bottom up, meaning the attachment point for the sub-assembly is on the bottom. What I might do is build a skycrane system with the Bus in it in the SPH and save that as a sub-assembly.

Probably should have done that first, but then doing things the easy way is clearly not how I play KSP. 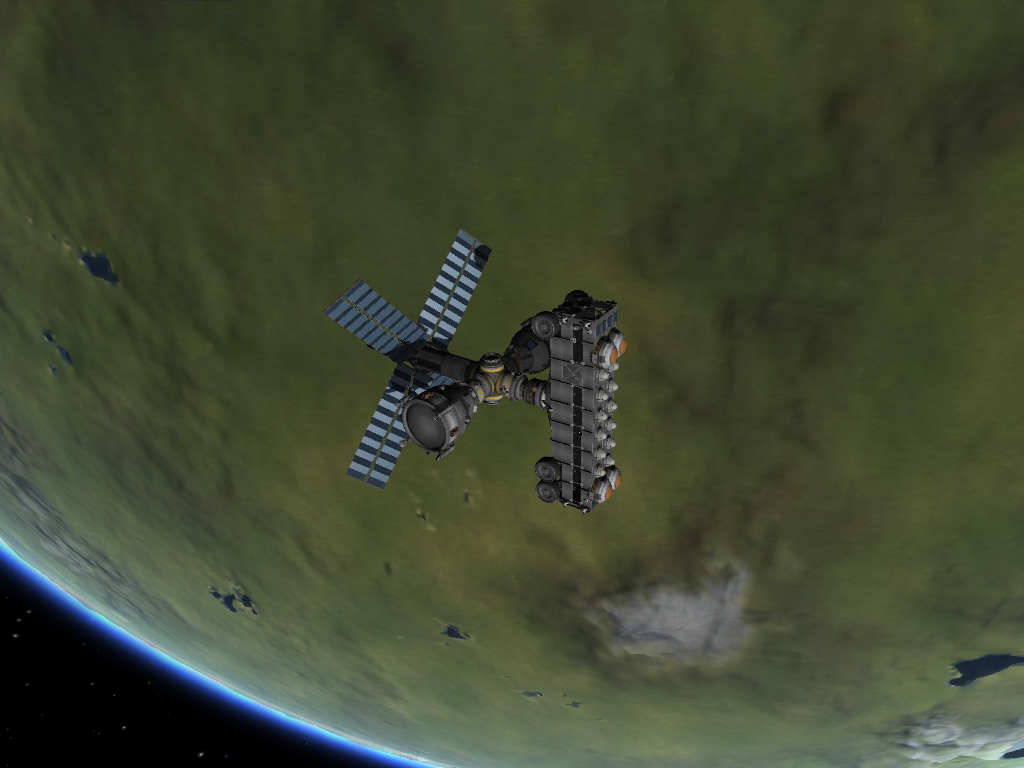 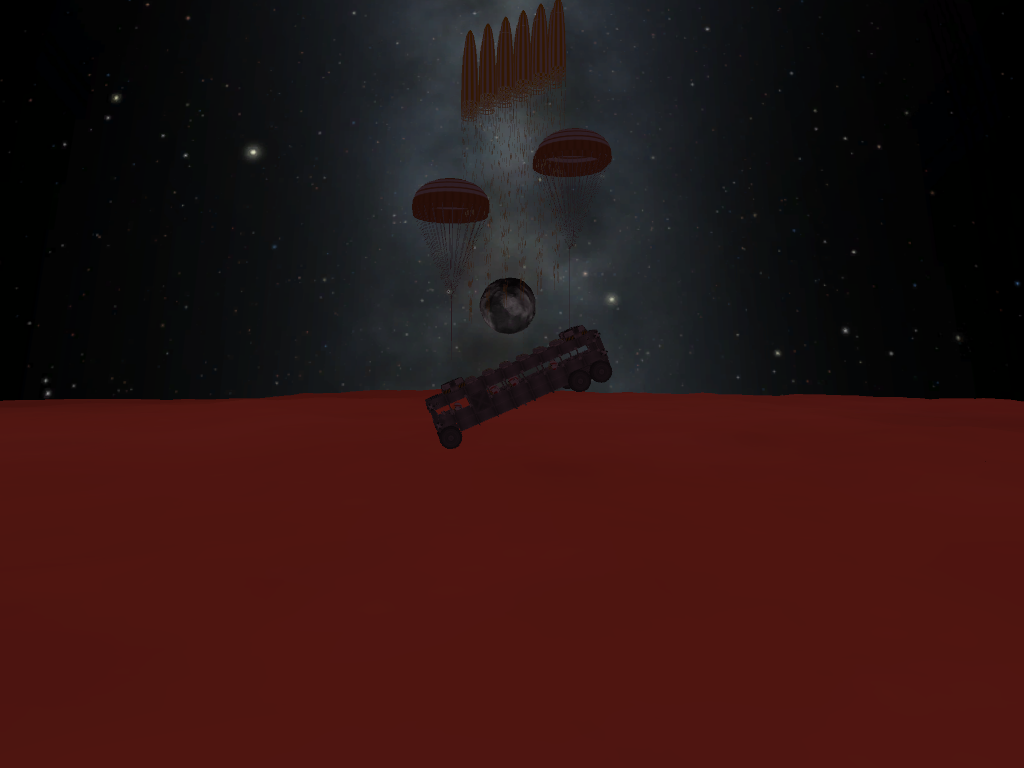 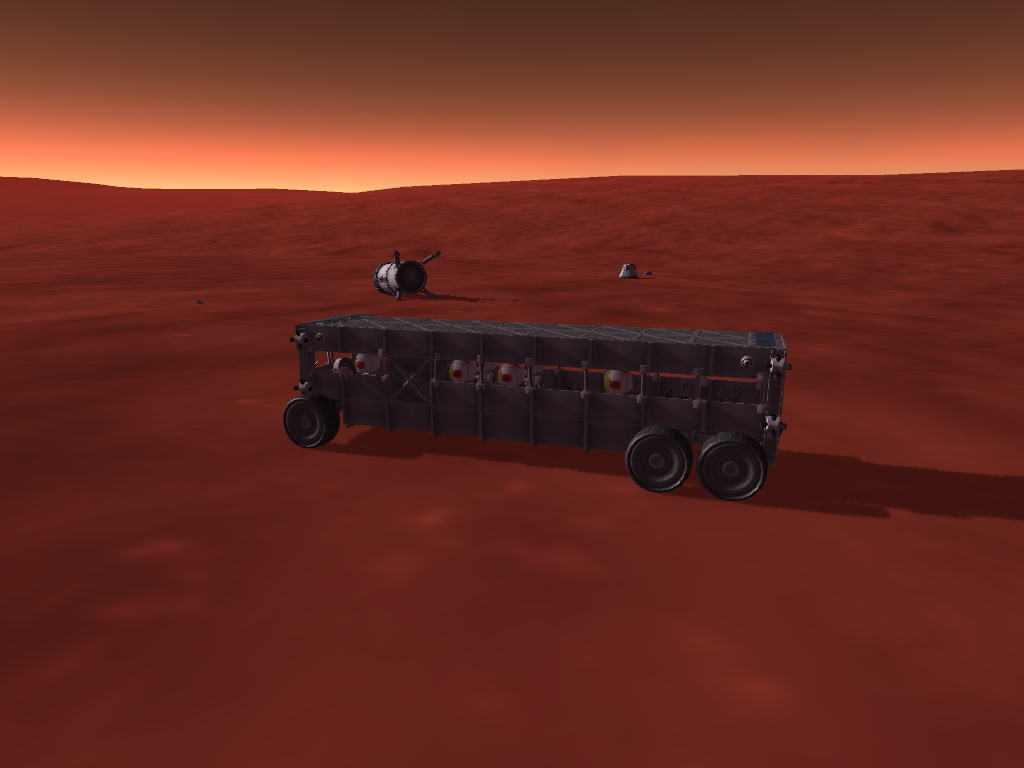 This mission did not turn out quite as simple as I'd planned, as evidenced by the rescue craft in the background of the last shot. It started out fine...then went very Kerbal.

The bus is great though.

I was just thinking, if we actually get multiplayer, maybe we should start a multiplayer LRR server. We could for instance organise a "race to Mün" or to minmus.

For added awesome, we could try inviting Mohawk Guy at DB!
THE DUTCH!! THE DUTCH AGAIN!!!!!

I await the inevitable moment that a 'race to Duna' incorporates weapons systems as everyone tries to bump the other off
"Let us think the unthinkable, let us do the undoable, let us prepare to grapple with the ineffable itself, and see if we may not

YESSSSSSSSSSSSSSSSSS
"We're not on this asteroid for very long, let's be nice to one another." - Alex Steacy

As for landing the damn thing on Mun, I've present, the Mark3 BusLander Ultralift!

I haven't actually lifted it into orbit, but it can lift the bus on Kerbin without trouble. (actually, lob it straight up 600 meters, then bring it to a gentle landing, with about a quarter fuel remaining)

I decided on the "how to land it" bit first. I realised having anything on the bottom of the bus when landing it is going to be a problem, so there are 4 masts connected with a stack separator. Once the wheels touch the ground, release the stack separators and the whole crane just flies away. Plus I can now connect whatever I want to the bottom!
THE DUTCH!! THE DUTCH AGAIN!!!!!

Why the hell didn't I think of using stack separators. That's genius.
"We're not on this asteroid for very long, let's be nice to one another." - Alex Steacy

Added to previous: I won't be attempting to actually launch the thing to the mun. My system can BARELY manage the bus with lifter on a semi controllable framerate. Added a launch stack to the thing would make it completely uncontrollable.


BTW, as a bonus, the lifter doesn't need RCS for control. It's got plenty of power reserve and reaction wheel torque for control. As the LV-T45 engines used now are way overpowered (quarter power is enough for liftoff on kerbin) they could probably be replaced with much lighter, more fuel efficient engines for landing on the mun)\

I'll try that out shortly.

Getting the bus to Duna isn't that difficult, I was able to fairly quickly get a good transfer window - the problem was just having a wholly underpowered transfer stage (and lots of wobble). A quick way to eyeball a direct transfer window is to draw a line from the Sun to the lower planet, and from the lower planet to the higher planet. When the lines meet at a 90-degree angle, you're good to go. Or you could use a mod like Protractor and read off the exact angles, but I didn't have it installed yet.


EDIT: Didn't get the smoothest landing, but here I am on the Mun:
Click to Expand 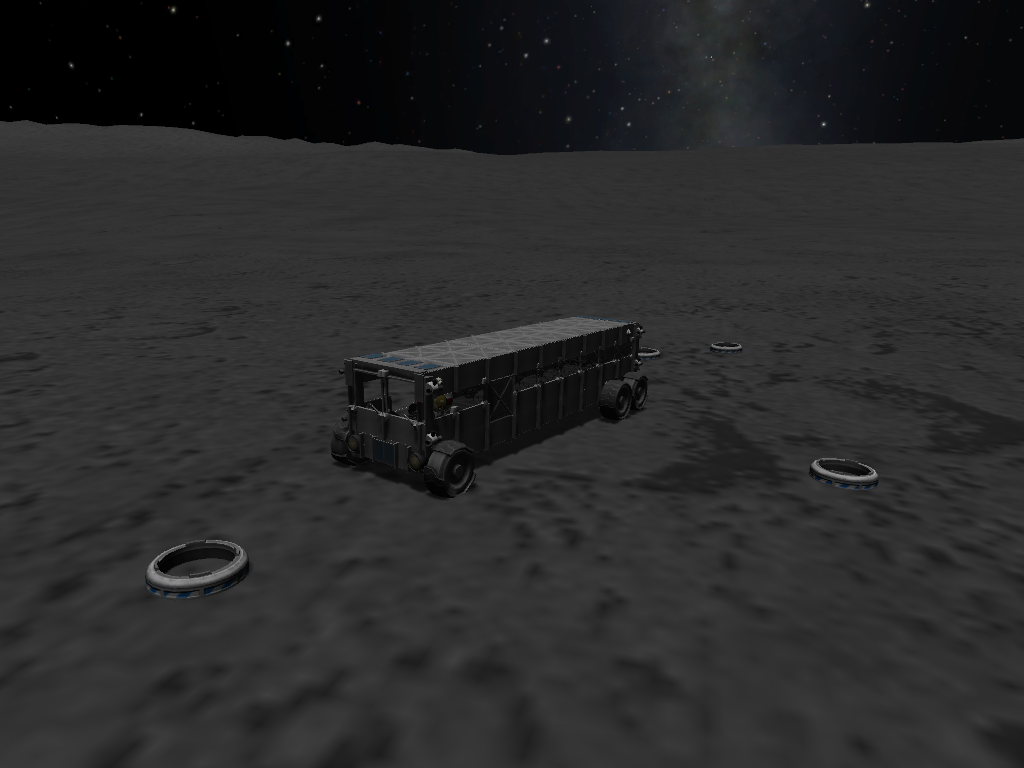 I replaced the LV-T45s with LV-909s - same thrust as T45s under quarter power, but you save a couple tons in weight (well, mass). I swapped to one of the cranes after I separated them, and it got a half-million kilometers of altitude before it ran out of fuel. Had I done a more efficient landing instead of wandering around looking for a smooth spot to put down, it may well have achieved escape velocity.


EDIT2: Finally got around to installing Kerbal Engineer and started playing around with different engines, and it looks like the 909s are the way to go. Their low weight and high ISP give them the highest delta-v of any engine other than the NERVA, while keeping mass down (the nuclear engine adds another 7 tons at launch, compared to the 909s, though it will give you another ~700m/s of delta v, so you could probably use it as your transfer stage as well).
The small Rockomaxes will also work - a bit less delta-v than the 909s, but they cut the weight down a bit more too and still have enough of a TWR to do the job on the Mun.

While CantWearHats was Space Bussing, I took the Bus to Lathe (moon of Jool).

I ran out of fuel before entering the atmosphere, so I didn't manage to hit land. And I didn't add quite enough parachutes, so I took some damage on the landing. 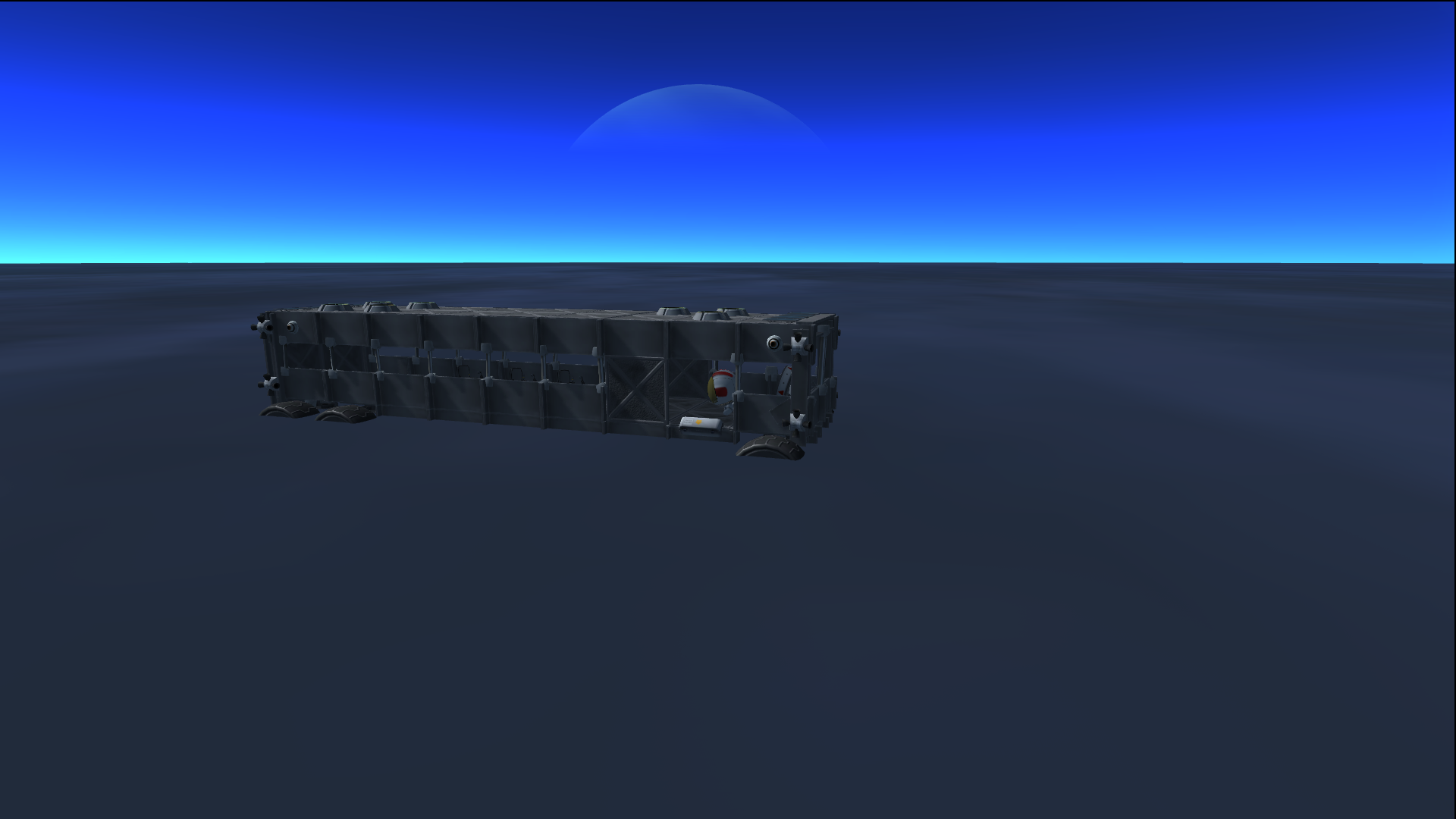 eikimekim, as I said the other day, that's AWESOME! 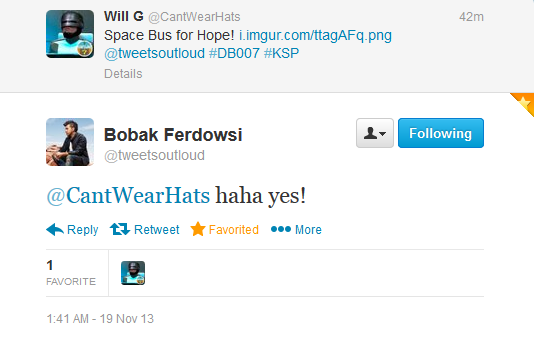 And I should have said this before, but I did a livestream of me FINALLY landing the Space Bus on the Mun with the DB007 chat in tow in a sort of impromptu Desert Bus pre-show - you can find it on my Twitch channel www.twitch.tv/cantwearhats

At long last, here's the Bus landed safely on the Mun: 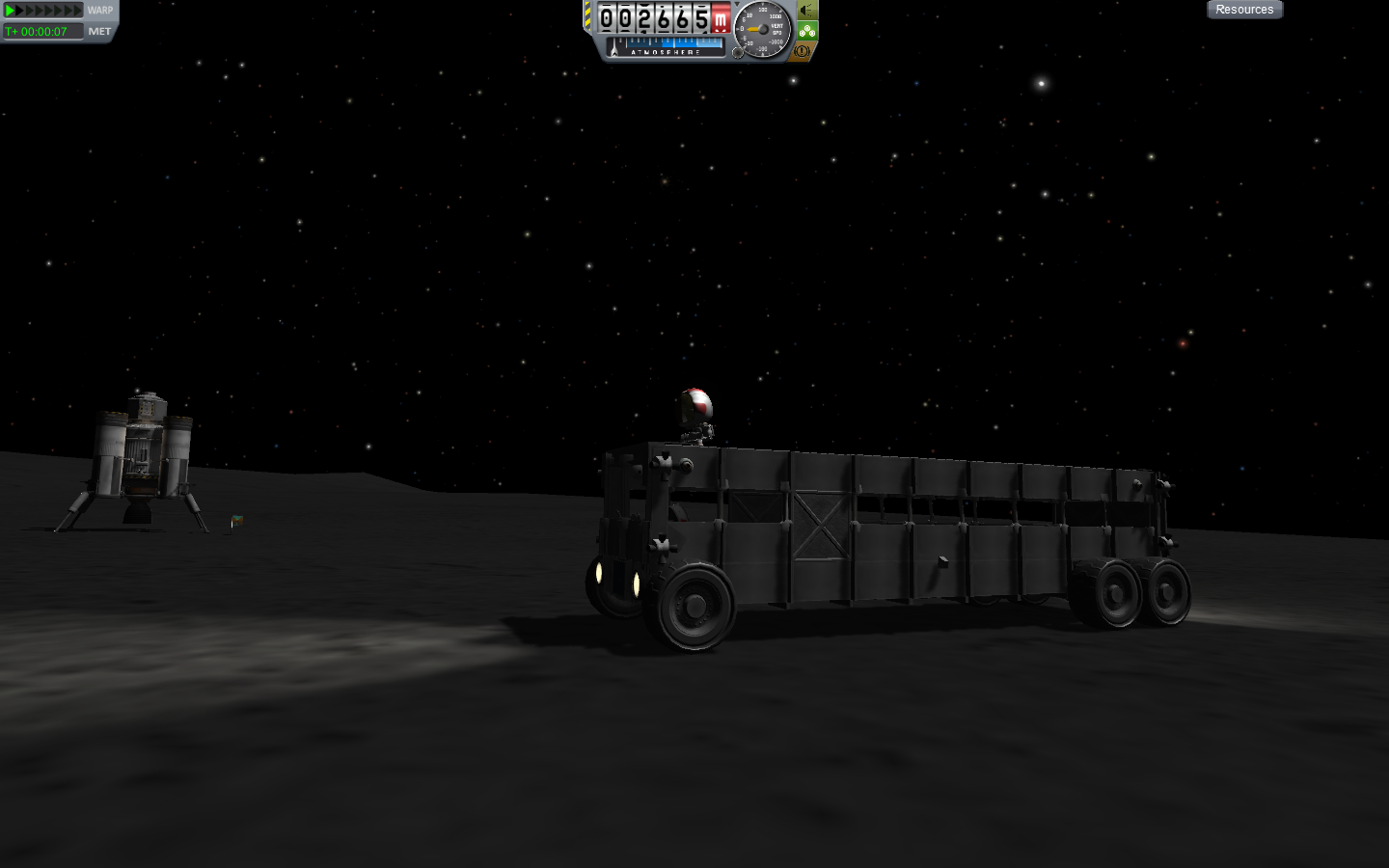 So the idea of a LRRbal Space Program server if they add multiplayer sounds good. Not sure how the multiplayer is likely to work with accelerated time amongst other things, but if they figure that out, could be decent.

I'm really into building space stations in career mode at the moment, have two in orbit over Kerbin (one at ~102km, one at ~153km), the second of which is the first stage in a manned Duna mission (Orbital station w/ lander and return-to-orbit capsule rocket, and a disposable docked rocket motor to get it there, and return/re-fuel it).

If that becomes a possibility, I'd like to volunteer to act as the Kerbin Transfer Orbit (KTO) pilot for launching stuff into orbit for orbital assembly or space-station transfer missions.

There is a mod that introduces multiplayer. although all I've seen of it proves that it s VERY EARLY build. as it is barely functional
Deviantart: http://warran.deviantart.com/
Tumblr (Not NSFW anymore): http://thesmeggyone.tumblr.com/
Top
Post Reply
237 posts