68 cards with three legendary creatures, all tricolours - a R/W/U, a U/B/R and a B/R/G. I think a commander deck could be put together out of mostly those cards
Thoughts From a Fish Bowl<------ my blog...

Yellowjacket Comics
Legenday Land - FLGS
T: Play another land this turn from a unopened pack of Magic™ cards. Each use of this ability must use a pack from a different expansion of Magic™.
"Kathleen, some Urza's Destiny, perhaps?" - Dan

The art skills, I have none, but I like this. It's pretty much broken...as long as you have the money for new packs.

And here's my card for Yellowjacket: 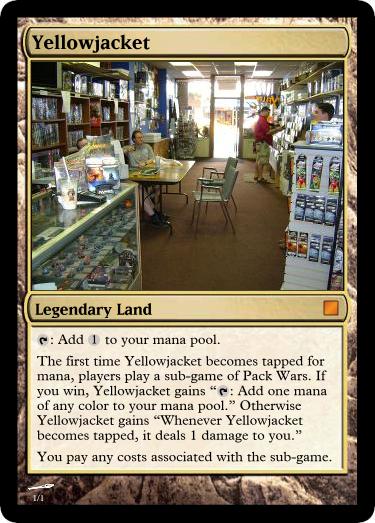 Cumulative upkeep 5 -(At the beginning of your upkeep, put an age counter on this permanent, then deal X damage to Yellow Jacket's controller unless you pay its upkeep cost for each age counter on it.) The upkeep cost may be paid by sacrificing X non-land permanents, discarding X cards from your hands, putting X cards from the top of your library into you graveyard, with X nonspecific Mana.

tap : for W,U,B,G,R, This mana may only be used to pay for cards or abilities from the L.R.R. Block

"You are certainly welcome to try and only buy one. However, when you find that impossible, we do take all major payment types Cash, Credit, Debt and Kidneys, but no refunds on store credit."
Top 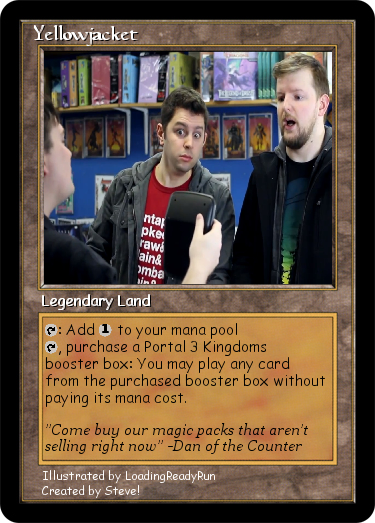 Man,I am mostly bummed this card design is not very art focused. Any one have some ideas for something to draw/ make this more arty?
Top

Kaboom242 wrote:Man,I am mostly bummed this card design is not very art focused. Any one have some ideas for something to draw/ make this more arty?

my art fu is weak

Here's my design. I didn't have any ideas for the art. I didn't want it to bring in cards from outside the game, so I stuck with the idea of trading.

Basically, you can gain control of an opponent's card, but they can gain control of one of yours of their choice. The wording could probably be better, but I wanted to make sure that it wasn't "You now control my creature, so I'll take control back" plays. It kinda has a similar flavour to conjured currency.

Been a while since I last made a Magic card. This was fun!

The way Conjured Currency does it is the difference between controller and owner, but doing it that way means no-one can gain control of any card that was originally theirs
Top

Graham, dude, the Sapling of Colfenor is a lady.
Captain Technicality, away!!!
*makes whooshing noises with mouth*
Top

Wow, some really nice designs in this thread. Love it.
"if it ain't shiny, rub it on your hiney"
Top

Finally saw this episode. One of my commander decks heavily reviled and thoroughly enjoyed. The commander can tell you why. My commander is Heartless Hidegetsu. My strategy makes my friends laugh everytime but there are people who just get really angry when I use it. My two main decks are just all the cards that are unplayable in 60-card magic. My commanders just are designed to stretch rules. I have two commanders that let me clone cards and their backups are a dragon that lets me play an extra card from the top of my deck for only 3 mana and a card that lets me see my top three cards and pick one to draw and the others go to the bottom of my deck. I have seven decks right now. I am trying to build an eighth. I provide all the gear for my school game club so I am constantly building another deck.

Self wrote: I lost my humanity back in 2013 BC ahhhh the good old days. 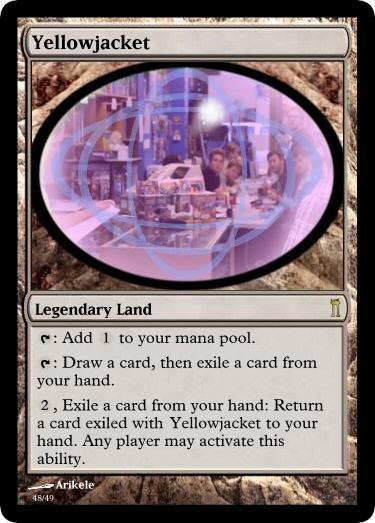 I felt Bane-Alley Broker's ability was ideal for Yellowjacket as it literally stores cards.
Top

I don't play MTG, but I do lurk here mostly for anthropological reasons

That being said, maybe other "Land" locations beyond Yellow Jacket should include common LRR locations too:

Yellowjacket
Legendary Land
1 tap: Search your library for a basic land card and put it onto the battlefield tapped. Any opponent may discard a card. If a player does, they gain control of the land that came into play this way and you draw a card.

With Yellowjacket, you obtain product (lands) from your supplier (library) and sell them for profit (cards). I thought about doing one that eats up resources for future benefit, like how Yellowjacket lets LRR take up store space for free advertising and customer loyalty. Something like:

Yellowjacket Comics
Land
Yellowjacket Comics untaps during your opponent's untap phase.
Tap: Add (1) to your mana pool.
Tap: Shuffle your library. Draw fifteen cards, putting one of these cards on top your library and the remaining fourteen at the bottom of your library. End your turn. Target opponent takes an extra turn after their next turn.
"I know there's an Aurelia in here somewhere and I need to find it before Matt does!" -- James Turner.

Yellowjacket Comics
Land
Tap: Add (1) to your mana pool.
Tap (X), Sacrifice Yellowjacket Comics: Put X 1/1 green Wasp creature tokens with haste into play. Exile them at the end of the turn.
"You have had to get way more creative with your Matt-torment." -- Graham Stark.
Top

Inspired as much by booster tutor as anything, but with the advantage of supporting your LGS. Hopefully almost balanced. You should always hit at least one land in modern boosters, but perhaps more. 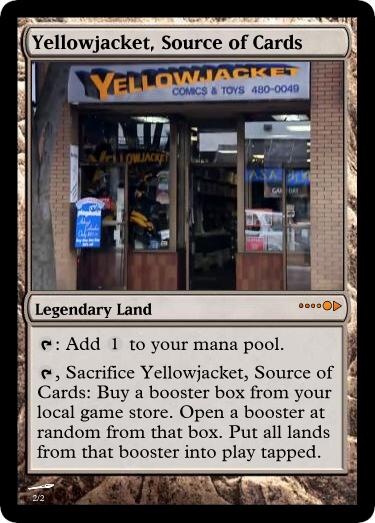 Icelight wrote:Inspired as much by booster tutor as anything, but with the advantage of supporting your LGS. Hopefully almost balanced. You should always hit at least one land in modern boosters, but perhaps more. Always two in Dragon's Maze!

There would only ever be two lands in a Dragon's Maze pack if one is foil. The set has no basic lands.
Top

WOTC Legendary Land
Tap to put a card from any non-current expansion into play at no mana cost.

"No problem. I have ten boxes of that in the Warehouse."
Top

WOTC Legendary Land
Tap to put a card from any non-current expansion into play at no mana cost.

"No problem. I have ten boxes of that in the Warehouse."

No, they'd be a creature. 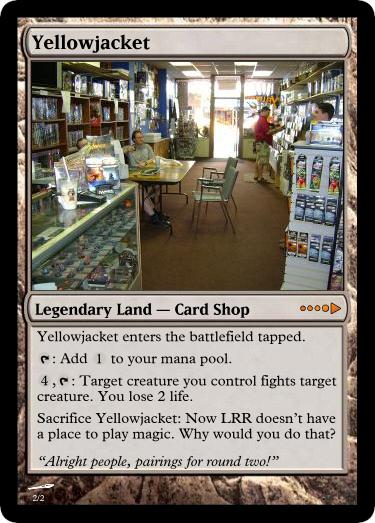 I wanted a card that was one part funny and one part functional. I also wants its mechanics to reflect the shop in some way. I liked the idea of making creatures fight since people getting paired off happens all the time at FNMs.

*edit* Slight change to make it not quite as broken.

*edit* the 2 life represents your buy in for the standard tourney -_^
Last edited by Utilitarian on 30 Mar 2013, 23:43, edited 1 time in total.
Look at the cards. LOOK AT THE CARDS!
The Saga of Ballchannels: My Dwarf Fortress Let's Play
Top
Post Reply
84 posts