Our friends Alex and Serge return to tell us more stories about their favourite 100-card singleton format.
Top

The blue draw cards combo were: Reach Through Mists, Peer Though Depths, Sift through Sands, You had to play the first two (in any order) before Sift, and then if you did you get to search your library for The Unspeakable a 6/7 flying, trample creature that when it does combat damage to a player you get an arcane card from your graveyard back to your hand. I had built a terrible deck based on it. Half the time I would draw The Unspeakable when combing off though but when it worked... glorious.
Top

Sorry, I just had to make this. 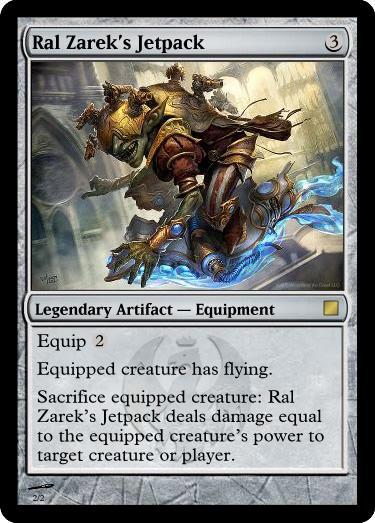 It's all over but the crying. And the taxes.

"Perfectionism might look good in his shiny shoes, but he's kind of an asshole and no one invites him to their pool parties."
Top

Slight corrections: Commander damage is only combat damage, otherwise certain legendary creatures would be quite overpowered. So Nekusar, while annoying, will not kill you after X draw steps.

I actually run a similar deck to the "evil deck" in Commander. It's R/B with Kaervek, the Merciless at the helm (though this may change to Mogis). Here's an older version of the list. It's sorta budget so it typically never wins, but it makes sure that games progress very quickly because everyone is only top decking! I end up preferring red as the secondary colour because it gives you access to Sire of Insanity (who would be the commander were he legendary), Sulfuric Vortex, Rain of Gore, Shivan Gorge, other lifegain prevention. Much of the manabase is artifact-based to simultaneously ramp and protect yourself from your Pox effects.
Last edited by curbee on 15 Jan 2014, 14:08, edited 1 time in total.

Mogg Cannon seems to fit the flying fling mechanic fairly well. Or at least in a very goblin way.
Top

Equip reminder text reads "attach to target creature you control. Equip only as a sorcery." This means you are allowed use the ability targeting a creature on which it is already equipped. All you need is shuko and cephalid illusionist.

In regards to Fun Police, I would love to see the list. Also, where can I see the points list?
Top

I waited til the end of the episode to see if you corrected yourselves, and you didn't, so...

I love the name "Fun Police".
Looking for an older video? Try this wiki page. (Current through the end of 2008)
Top

Cephalid Breakfast is one of those names that evolved to a point completely unrelated to it's origin.

There was a period of naming decks after breakfast foods (Trix, Fruity Pebbles (and Cocoa Pebbles)), leading to a tool-box reanimator combo deck based on Volrath's Shapeshifter, called Full English Breakfast.

Cephalid Illusionist took the place of Survival of the Fittest as the combo enabler, (also, the payload has changed) and turned it into Cephalid Breakfast.

Same sort of evolution as Draw-Go -> Caw-Go -> Caw-Blade, as parodied in a Friday Nights episode.
"Why does Sonic chill like dawgs?" - Graham
"Causation. Still a leading cause of correlation"" - Oglaf

Guys... Graham, Paul, Alex, Surge!! Anyone!! I NEED that group hug mill decklist!!! Mill is my jam, and I've been looking for a way to do a Mill Commander deck. That setup sounds even more twisted than my plan for Mirko Vosk, Fireshrieker, Resonator. If someone could post that decklist or get it to me that would be GREATLY appreciated!!
Top

I just remembered most this while eating lunch. Thanks for fleshing out my memory.

Man, what a stupid broken combo Trix was.

The best part about Trix was that it was just a 2 card instant win combo basically, that used 2 cards that were, at first glance, bad cards.

Also, on the new spoiled burn spell that hits Planeswalkers (obviously its been confirmed as doing that by now): There has never been any restriction on doing damage to or targeting a Planeswalker directly, its just that because none of the cards pre-Lorwyn referenced Planeswalkers they had to retrofit the "redirect" rule onto existing burn spells to keep the card type from being disgustingly overpowered and to keep from having to errata every direct damage effect ever. There was also a period of time after Planeswalkers existed where they were a little shy about actually using the word in card rules text, because they wanted them to feel more special (in fact, there are no cards printed before New Phyrexia that reference Planeswalkers in their rules text, despite the card type having existed for about 4 years at that point), and so they didn't make any Planeswalker specific burn spells. Now it seems that after Despise, Dreadbore, Hero's Downfall, Magmaquake etc etc they are more willing to just spell out that Planeswalkers are objects in the game, and so they finally just brought out a burn spell that directly targets them.

Edit: OH I almost forgot! If you ever need evidence that creatures in Magic have gotten WAY WAY better than in the past, just know that at one time Mike Flores famously won a CONSTRUCTED PTQ with 4 copies of Gnarled Mass in his deck. It wasn't a piece of technology that was widely adopted, but the reasoning behind it in his deck actually made sense. As LSV once put it "I love Kamigawa block. Turn 2 play a bear, turn 3 play a bear, turn 4 play a bear..." A vanilla 3/3 was surprisingly effective at stalling those decks out.
Top

Forgive me if I am wrong but wasn't Tallowisp in the original Ghost Dad deck?

The Mindrazer deck is generally called painful wheel as it runs cards like wheel of fortune, its is rampant online at the moment to the extent that I used to run a Prosbloom deck a lot but I have had to put it on the back burner
All my current Commander Decks
I stream Magic http://www.twitch.tv/acowen Tune in for EDH Fun Times!

There's a weird jump cut at 1:06:47...intentional or unintentional?
Top

deathjavu wrote:There's a weird jump cut at 1:06:47...intentional or unintentional?

Intentional. Serge had to go move his car.
Top

deathjavu wrote:There's a weird jump cut at 1:06:47...intentional or unintentional?

Intentional. Serge had to go move his car.

That wasn't an editing cut, Serge can just bend space and time at will. So that was all one shot.
Top

Is there a reason you're no longer showing the cards when you open a pack?
Top

the computer they were using for lookup and card display got moved to the streaming office. They'll be getting a new computer for the 'casts soon. (see TTC: Catching Up; it was discussed in that episode.)
Formerly madAlric
All of the Crapshots in one place
Top

where do we go for the "Stump the Judge" questions?
Top

Is there a link to an explanation somewhere of the differences between EDH, Commander, and whichever of the two it is that you folks play in Victoria?
Top

EDH stands for Elder Dragon Highlander, which was the format's original name, but when Wizards made it an official thing, they changed it to Commander to avoid copyright issues with using the Highlander name (which refers to the movie, and the idea that there "can only be one" of any given card. Elder Dragon is because originally the Elder Dragon cards were the only generals used.) So there's no difference between Commander and EDH, and they're often used interchangeably.

Highlander without the Elder Dragon part is what they're mostly talking about this episode. Still 100 card decks with no duplicates, but there's no general, life counts start at 20, and it's more focused on one on one play than multiplayer.

The previous TTC with Serge and Alex has a bit more of an explanation about what Highlander is, if you want more information.
"Jamfalcon's a super weird name" - Graham

Jamfalcon wrote:Highlander without the Elder Dragon part is what they're mostly talking about this episode. Still 100 card decks with no duplicates, but there's no general, life counts start at 20, and it's more focused on one on one play than multiplayer.

Ok, it's the presence/lack of the general that was confusing me. Also that I guess I've never seen anyone play either of these formats IRL.

Is it reasonable for a new player to try and construct a Highlander deck out of a fairly disparate collection of cards for casual play, or would I be better served trying to slowly hone my skills in Duels of the Planeswalkers and the occasional FNM draft?

Jamfalcon wrote:The previous TTC with Serge and Alex has a bit more of an explanation about what Highlander is, if you want more information.

That TTC was my first introduction to either format, and what made me want to get back into playing MtG after a 20yr hiatus... That didn't really work out.
Top

NoTrueSpaceman wrote:Is it reasonable for a new player to try and construct a Highlander deck out of a fairly disparate collection of cards for casual play, or would I be better served trying to slowly hone my skills in Duels of the Planeswalkers and the occasional FNM draft?

Totally depends on who you're playing with. It's my understanding (purely from these podcasts) that Highlander is usually quite competitive, so that might not work out too well, but Commander is a much more casual (and popular) format, so you'd certainly stand a chance with those.

For myself, I'd rather practice with Commander and only draft once I'm better at the game, but really once you understand the mechanics (which you might already, if you're a returning player) the two formats are so disparate that only so much will carry over. My personal suggestion, as someone who plays Magic on the extremely casual end of the spectrum, would be to play Duels until you're comfortable, then move onto Commander. It's less pressure than a draft, and there's usually no prizes at stake.

But you can ignore all that depending on who you're playing with. If it's a group of friends that aren't taking it too seriously, Highlander is probably a fine starting point, and if you're brave playing at a store might not be an issue for you. These are just my understanding of the formats in a very general sense.
"Jamfalcon's a super weird name" - Graham

Highlander is pretty much just Vintage with a 100-card deck in which (as Jamfalcon mentioned) there can be only one of each card (aside from basic land, and the two cards that say differently). Because it's not an official format, different playgroups will have different banlists, or deckbuilding restrictions (like the point system mentioned in the podcast) but that's the main thing.

EDH was based on Highlander, adding the general and the colour-identity restrictions. It was so named because at first the general had to be one of the five Elder Dragons, since the playgroup where this all started had 5 players. This is also the reason the "commander damage" rule specifies 21 points of damage... that's 3 hits from a 7/7 flying dragon. The format turned pretty quickly into allowing any legendary creature as the general, but they kept name.

WotC renamed "Highlander" as the imaginative "100-card Singleton" on MtGO, and "EDH" as "Commander", to avoid trademark problems.
While no one overhear you quickly tell me not cow cow.
but how about watch phone?
[he/him/his]
Top

I built a deck with 'Forced Fruition' in it. I called it "Screwed Coming and Going" and it was built around 'Underworld Dreams' and 'Megrim'
Top

That sounds like about half of the EDH meta around me. I'm getting a good idea of where I need to use my spot removal, and when.
Formerly madAlric
All of the Crapshots in one place
Top
Post Reply
27 posts