Discuss our latest podcast about Magic: The Gathering.
Post Reply
19 posts • Page 1 of 1

The crew talks about their favourite cards from the upcoming Commander 2014.
Top

Oh fun! I'm starting the video now. I wonder if you guys are of the opinion that the blue deck is unplayable.

————
Edit after the video ended
On Nahiri
Did anyone get the feeling they told Nahiri's artist "like stoneforge mystic" and got "exactly stoneforged mystic" and thought "Eh, good enough."?

I don't think the art goes back to the creative team for a second look.

On Raving Dead
Why would I want to ally with someone that put Raving Dead in their deck? I would only give them a pass on this if he or she is playing an unaltered preconstructed Sworn to Darkness.
Last edited by Psithief on 06 Nov 2014, 04:16, edited 2 times in total.
I sure enjoy watching LRR!

I wouldn't want to meet them though. I'm very allergic to cats and fun.
Top

We adhere pretty strictly to "the rules" at the venue I play Commander at (with the sole exception of the one guy the shop owner lets use the Nephilim as generals), so there will be no non-sanctioned planeswalker commanders round these here parts. Thank goodness.
Some of the Commander Decks I have: Not Creature? THEN DIE!, For Whom the Wolf Howls, A Growth Market, Samurai Local #42, Better Homes and Bargains.
Top

"If you're not gonna respect colour identity, you may as well not be playing commander."

Anyway, I'm not really happy with the planeswalker commanders. They're incoherent from a flavour perspective, I dislike references to Commander rules artifacts (Commander is just one of many casual variants. If you like playing, say, Emperor why don't you get references to your rules stuff?) and I dislike the soft effect these sorts of things can have on the Commander rules.

Normally if the Commander Rules Committee sees a legendary creature that they think takes the game in a bad direction they ban it. If they ban things like these that would have a serious effect on the profits of Commander products which is endangers the active support of Commander. Which of course they don't want to do. Obviously they don't want that, so there's a tendency to be more lax with flashy Commander product cards. Which is bad if WoTC actually wants Commander to be a fan defined format rather than something they control.

Personally I'm with Kathleen on Raving Dead WRT politics. If you put cards like this in a deck, you shouldn't get to have real alliances. People are irrational so in practice you'll be able to reduce the heat with the "but it's random" excuse even if that doesn't make sense though.
Top

Dulcet Sirens have morph because there is an Ixadron in the deck
http://gatherer.wizards.com/Pages/Card/ ... me=Ixidron
Top

Just got up to the point where they are discussing the Earthblighter. I don't quite get why there's such fervent hate against targeted land-destruction in EDH. Mass land-destruction, yes of course, nobody enjoys not being able to cast anything for several turns. But there's so many (spell-)lands that just require an answer (Academy Ruins, Alchemist's Refuge, Cradle, Vault of the Archangel, etc etc) that blindly giving the player who does run some land-destruction all of the table's hate seems kind of unreasonable. I guess that, as usual with EDH, it comes down to discretion. It's just that at the mention of land-destruction in EDH everybody going 'burn'em, burn the witch/walker!' reflexively doesn't sit so well with me.

Curious what you are going to say about the green card that destroys all non-basic and replaces with basic. (At Nahiri right now

Awesome TTC guys, those Commander decks sound great. Thinking of introducing my playgroup to the format with this release. Maybe even play a bit of Commander Star, see if that could be a thing. Hoping to scoop up Freyalise for my first game.
Top

I think the big payoff with these Planeswalker Commanders is how their ultimates really feed back into their other abilities (except for green). I'm not a big mono-red player, but I want to live the dream with Daretti's emblem on the field and just pop an artifact to return one from the graveyard, with the emblem bringing the sacrificed one back at the end step. Attack with Wurmcoil Engine, sac it, get two 3/3s and Wormcoil returns untapped.

And I'm with Cam on Well of Ideas. That's definitely going into my Nekusar deck. Live the dream with Niv-Mizzet, Jace's Archivist, and Price of Knowledge.
I'm not insane. I just have an overly vivid imagination!
Top

Not sure if you realized but none of the planeswalkers die to their uultimates. Just saying... great episode.
Top

Me and my friends are saving up to buy 1 of each commander deck. These decks are just SRSLY busted(c). Eventually these will all trickle down into other commander decks for me, but one of my friends is buying two of each deck because he's working on a False God superfriends deck that has all the gods from Theros block with all the planeswalkers he can cram in, especially because of Teferi.

So me and my friends play some pretty competative commander at my lcg. So everything I'm about to say is through that lens.

But I do not like the "commander planeswalkers" I think it really doesn't make sense. It doesn't go with the rules.

Commander damage is a fairly important safety valve on the game since you can always kill someone via commander damage, even if they have a billion life.

The power balance here also seems off among the planeswalkers.
The black one is ok the red and white one are bananas, the blue one is fine and I honestly couldn't remember the green one off the top of my head. From everything I've seen online all of these pws are just going in decks they aren't really forming decks around them.

I dunno again we are pretty competative so these just seem "cute" (I mean we regularly play with infinite combos, board locks, land destruction, animar, etc.)

Again the precons are great for kitchen table... But I tried that for a few years and it just wasn't my cup of tea.

All those draw effects Cam was talking about? Notion Thief would like a word.

Shadowwarl wrote:Not sure if you realized but none of the planeswalkers die to their uultimates. Just saying... great episode.

Teferi does, if you activate it on curve.
Top

There's a bit of land hate for specifically nonbasic lands in the preconstructed decks, which I think is as it should be - a basic land isn't harming anyone, but sometimes you just want to kill someone's ... hm ... whatever a relevant nonbasic is.

I played the white deck (forged in stone) tonight in a five-player game with one of each colour of preconstructed decks, it was a lot of fun. I tossed up between playing white or green, in the end I think I'm pretty happy being white.

From what was going on around the table, the red deck (as everyone predicted) is insane. The red player was drawing more cards than the blue player, eventually he actually milled himself out (intentionally, because the game ran rather long). It seemed like a lot of fun.

Dubious_wolf, I think it's fair to say that Commander (as a product through the WotC preconstructed decks, as a culture through the Rules Committee) is "tuned" for a lower level of competitiveness than you and your friends play at. The planeswalker commanders in particular seem designed for the long game - unlike regular planeswalkers, getting one to ultimate won't hand you the game on a platter. So yeah, the commanders and the preconstructed decks are underpowered by your standards ... but by regular commander standards, you and your friends are so overpowered it wouldn't even be fun to play.
It's fish in a tin!
Top

I mean the idea is you have access to basically every card. Why would you not want to play with the most powah? That's just how we approach it, and at the end of the day if someone just wants to play super casually we grab another less broken deck or don't play extremely competitively. But everyone has the ability to ramp up the power when someone is being a dick and playing unsportsmanlike, (given the context of course)
^( " )^
winner!
Top

I can't find which TTC episode you guys mentioned Storm Herd in, so I'll just post this here.
You guys inspired me to do this: 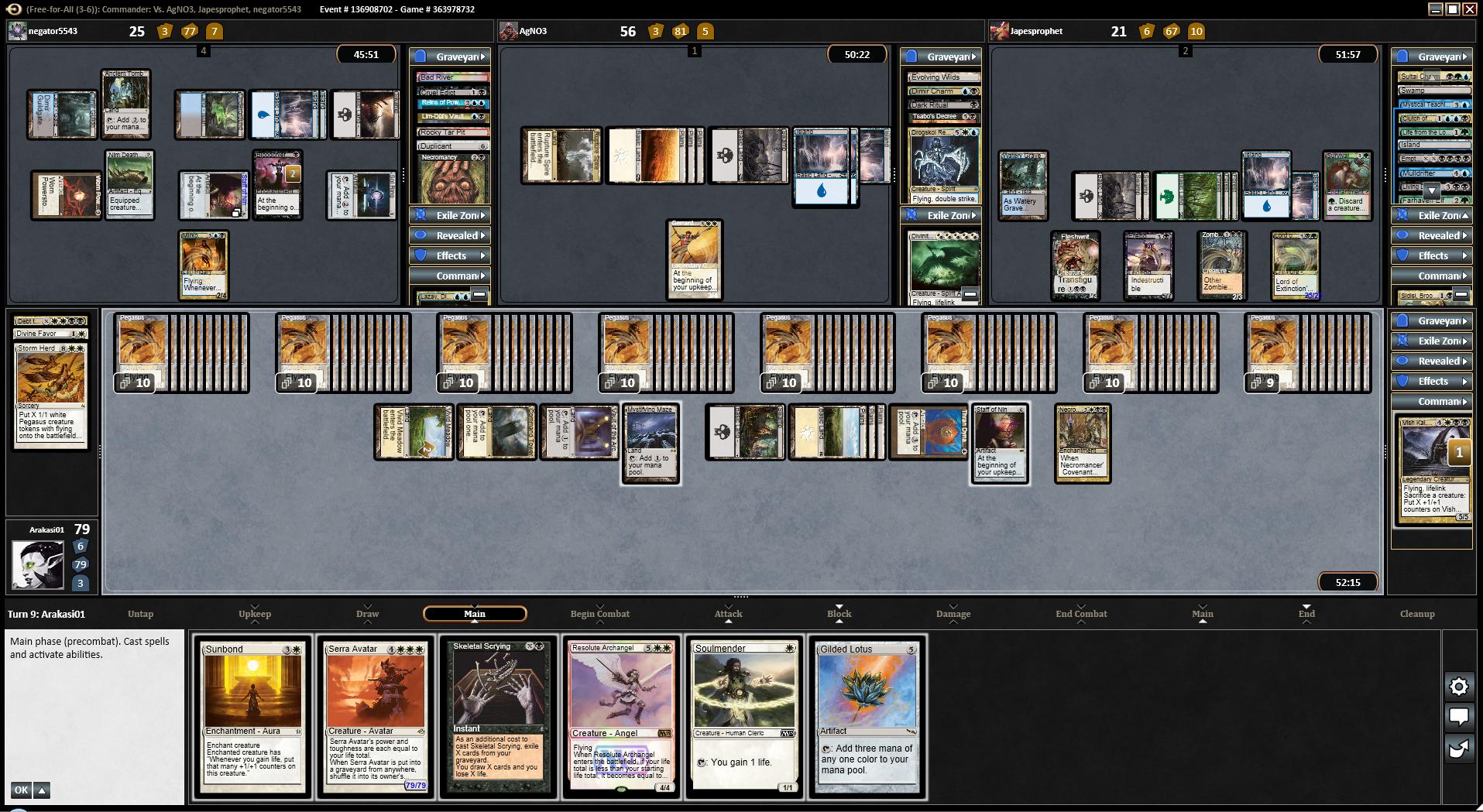 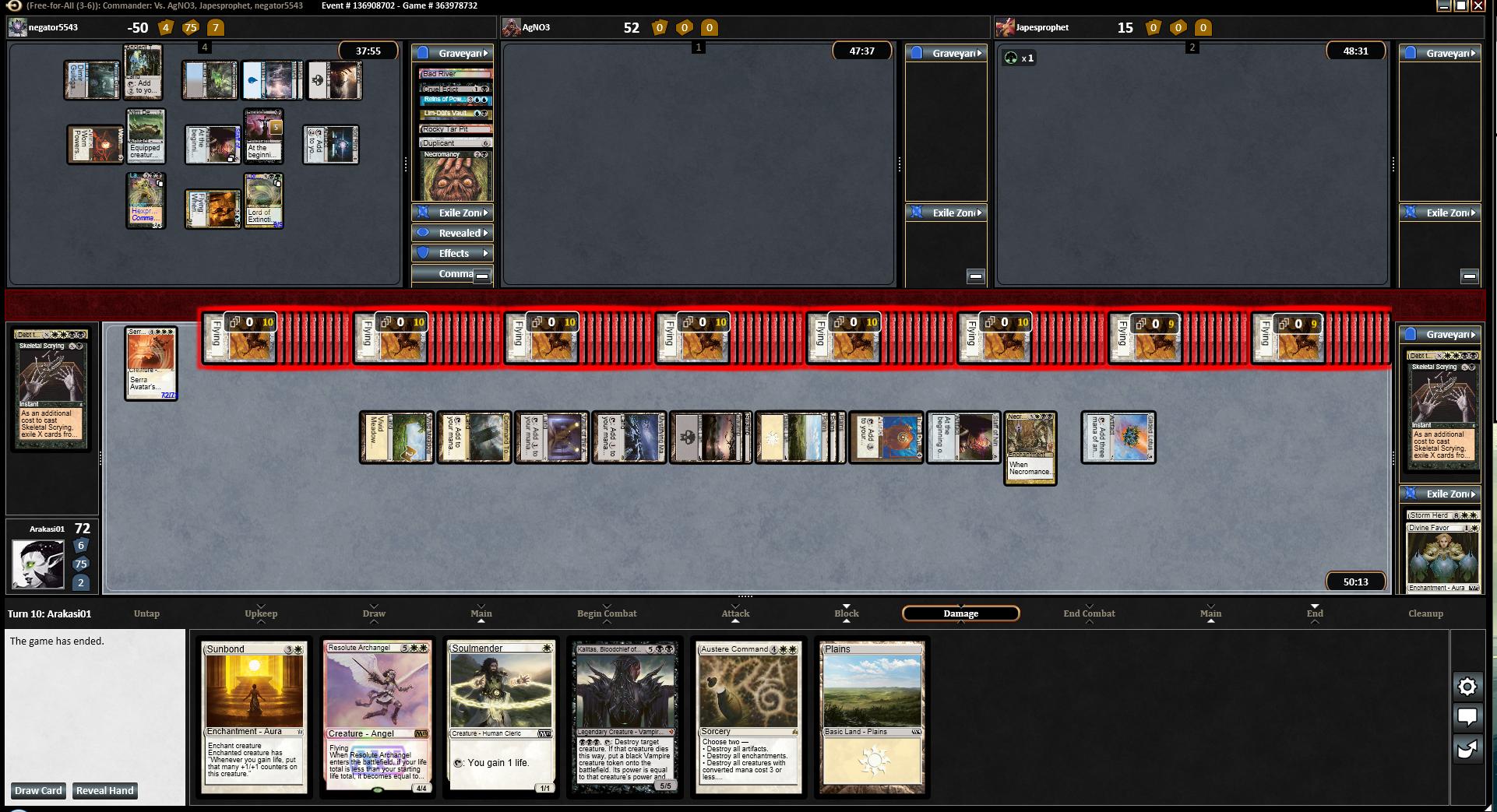 Also, I'm fine with the planeswlkers-as-commanders thing only if it's a special, one-time thing. If they do it again, or if they try to make all planeswalkers work as commanders, I'll hate it.
Captain Technicality, away!!!
*makes whooshing noises with mouth*
Top

Arakasi wrote:I can't find which TTC episode you guys mentioned Storm Herd in, so I'll just post this here.
You guys inspired me to do this:

You monster!
I'm not insane. I just have an overly vivid imagination!
Top

Arakasi wrote:I can't find which TTC episode you guys mentioned Storm Herd in, so I'll just post this here.
You guys inspired me to do this:

Ahh. It gets better.
I did this:
Click to Expand 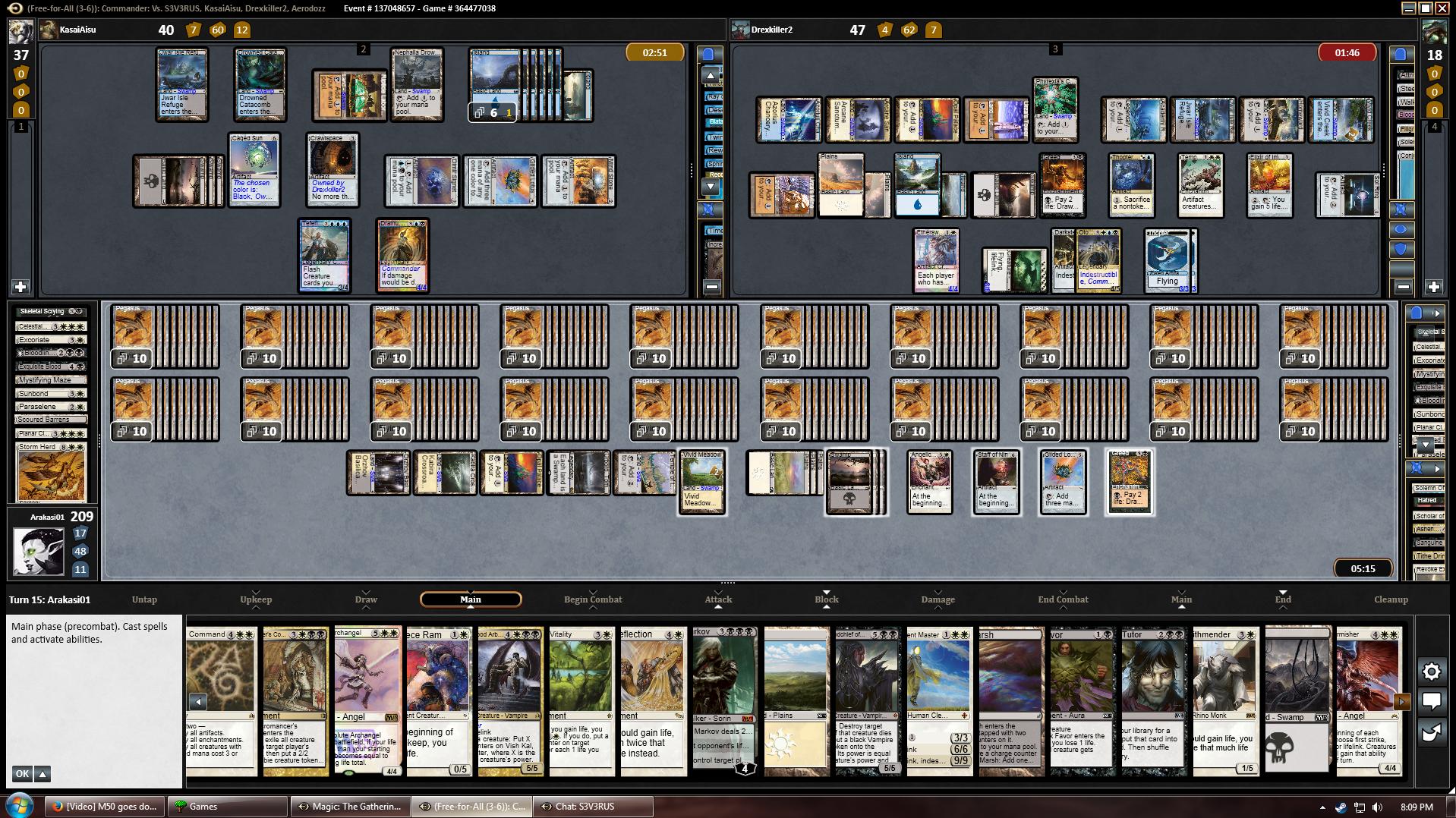 I sent a message to support asking why I only got 200 tokens instead of 209, they said that I hit the hard-coded limit.
Top

Good thing for that hard-coded limit for you then, otherwise Stronghold Discipline would have made you cry (more).
We'll wack the wack before the wack can wack back.
Top
Post Reply
19 posts • Page 1 of 1