Sure, other streams dabble with handheld gaming from time to time, but to Heather a mobile console is serious business. Join her as she introduces you (and co-host Kathleen) to some of her handheld favourites, new and old.
Top

I wake up sick 45 minutes into the "game"... which is apparently more along the lines of a Watch & Play "game"...
It appears to be less of a "game" than watching some stupid anime set in Paris.
Not a promising start to this show...

Much in the vein of GPLP, making fun of the game has been very enjoyable so far.

I guess I'm the oddball, then. With two exceptions, I watch LRL for the games. The first exception is Alex's streams. He seems to override "bad and/or boring" game in my brain somehow. The second is Graham. He doesn't do it as consistently, but there have been times. Cam, Beej, Heather, and Kathleen, as great and funny as they are, have failed to do so, so far at least.

Only got to see the last hour of the show (will go back and watch the replay later) but what I saw I enjoyed. Looking forward to seeing more.
Top

I'm sure you don't need me to tell you, but you don't *have* to watch every show, Memo. In fact, given the new schedule, it would be more than a full time job, with overtime, to do so.

You're not going to like everything, and life's too short to subject yourself to stuff you don't like.

I mostly watch the ones with Graham, with Cam, or with Paul, and some of Alex's. The others only if they're a game I like. I'll have to check this one out, when I get a chance.
"Why does Sonic chill like dawgs?" - Graham
"Causation. Still a leading cause of correlation"" - Oglaf

I made this Layton puzzle for you to work out: I had a lot of fun hearing H&K make fun of the awful game and helping them out with the rest of chat. That being said, I hope they have better luck next game, because mono-bad games wouldn't be fun, really.

I think this is going to be one of the streams where I prefer it when the game is not too engaging. I think I liked Beej's show when he was playing Paper Mario, since that lead to more conversations with Heather and with chat about whatever, as opposed to Shadowrun where they're more focused on the game itself.
Top

korvys wrote:I'm sure you don't need me to tell you, but you don't *have* to watch every show, Memo. In fact, given the new schedule, it would be more than a full time job, with overtime, to do so.

I know, I know, but LRL is the only socialization I usually ever get, and everyone's telling me to be more sociable, especially in the Depression thread.

Also, it might not bother me as much if Chat didn't endlessly make reference jokes. If I don't understand the reference, it's just confusing and frustrating and I get angry. Like, it took me 5 months to find time to watch Zoo Race. That's 5 months of anger at nigh-endless "RACE ME, HANNAH!" jokes that I had no clue why it was supposed to be funny. (A similar thing happened on a smaller time-scale regarding the ridiculous amount of "Pudding!" jokes from Hatoful Boyfriend.)

So, it's either catch the funny thing at the time it happens or get locked out of the "cool kids clique" that is Chat.

I felt the same with some Desert Bus memes, but ultimately, there's enough memes to go around. Don't know why Alex says "I'm a horse now"? That's ok, in 2 minutes the chat will be talking about "Stopping Powar!" or whatever.

Nobody can be everywhere.

Except CantWearHats.
Waiting.
Watching.
Gifing.
"Why does Sonic chill like dawgs?" - Graham
"Causation. Still a leading cause of correlation"" - Oglaf

I replied in the general thread, since this got a bit off-topic.

That game was so bad. I am sorry I was a bit loud in chat, I was just really frustrated about all the wasted art and music. that writing *shudders*

The streamers were great though, Heather and Kathleen make a great team. Can't wait to see what they can do with a good game.
"I wouldn't call myself an evil genius. Simply genius will suffice."

I really hate to be making this post, mostly because a couple of days ago I listened to a Twitch streamer on a different channel get into a bit about Backseat Gaming. But considering my memories of this game being charming but simple (in comparison to that game that I keep harping on about that DreamRift made when they were all still EA employees, Henry Hatsworth & the Puzzling Adventure), and I'm surprised that Heather has been having difficulty... well, let me see if I can't drag some advice for this game out of my memories of it. (Although, honestly, I regret sending this game away on Goozex so long ago. I liked it, but less than Henry Hatsworth.)

I have to second Harry Hatsworth's Puzzling Adventure as it mashes up two games into one challenging combo: Standard Action / Adventure with Puzzle de Pon (aka Tetris Attack, Pokémon Puzzle League & Puzzle Planet League... last one being a DS title as well). Juggling between both screens will keep you on your toes.
~TStodden
(Going Text based as Photobucket is being a jerk)
Top

As good of a game Henry Hatsworth is, it's brutally hard, and the death counter would skyrocket in the second half of the game. And it might not be fun to watch the final boss just because of all the deaths. I mean... phase 1 is a literal joke boss, but phase 2... I'm pretty sure I spend at least 2 or 3 hours, maybe more, trying to beat him, mostly because of all the dying. (He isn't a huge meat shield, but he hits like a truck and has several instant death moves. Also, he doesn't leave himself too exposed too often, IIRC.)

Soo... this happened during today's stream 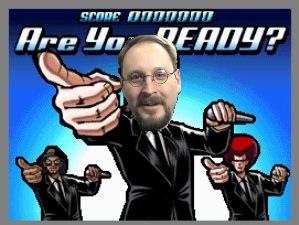 (I know, not exactly the right version, but you get the point)

They played Elite Beat Agents? I will have to go watch this now.
"Why does Sonic chill like dawgs?" - Graham
"Causation. Still a leading cause of correlation"" - Oglaf

They didn't play the US version. They played on the of the Japanese versions. But it was almost certainly the same line of games.
Top

Oh, Osu! Tatakae! Ouendan, then. Omega Lairon's image is from EBA. Either way, super cool.
"Why does Sonic chill like dawgs?" - Graham
"Causation. Still a leading cause of correlation"" - Oglaf

Yea, I think it was Osu! The image is why I mentioned it though, since I knew that was from the US version.

On a related note, more EBA games in the US please.
Top

it was Ouendan, yeah...I liked the 'dangerously stereotypical cultural silliness' that the game had; lighted my beleaguered mood... :J

What are we gonna play next?

If you want a quick game between larger games I suggest the Adventure Time one, It's only 4 hours long.
Top
Post Reply
71 posts