Drop by and talk about anything you want. This is where all cheese-related discussions should go
Post Reply
17 posts • Page 1 of 1

I'm sorry it took me so long, but I had to convert the whole thing three times until I found a way to get rid of the audio\video delay. But it's done!
Desert Bus 007 torrent!
76.7 GB, divided into Tech Tests, Preshow and main event, driver name noted in file name.
I'm seeding it pretty much 24/7, but upload speed here in Israel is a bit meh, so... patience?


Happy holidays, everyone. Here is the gift of 155 hours of video.

Is better compression the reason it is half the size of Desert Bus 6?

Lord Chrusher wrote:Is better compression the reason it is half the size of Desert Bus 6?

I have to be honest - I'm not sure. I have yet to find a difference in quality between the .flv I downloaded from twich and the .mp4 I converted it to, but the files are indeed smaller.

DB 6 was only transmuxed, not transcoded. That means it was still the exact same bytes transferred over the wire during streaming but with a different container. This prevents losing any of the original quality and avoiding wasting CPU time transcoding, but results in highly inefficient filesizes since the original encoding isn't the best it could be. Assuming boofinka transcoded (and not just transmuxed) the twitch files, it should be very easy to achieve smaller filesizes. Unsure what that'll do to the quality though.

Graham mentioned something about a torrent from the official files, but I wouldn't hold your breath.

This is awesome. Now i can complete my DB567 Collection.
Top

30 min max files for a grand total of 312 videos in the DB6 Torrent (Not that I'm complaining because I made a playlist with VLC for worry free viewing). And no fault of your own.I remember you bashing your head against the wall when trying to get all that stuff converted and torrented.

Fugiman wrote:Assuming boofinka transcoded (and not just transmuxed) the twitch files, it should be very easy to achieve smaller filesizes. Unsure what that'll do to the quality though.

Boofinka downloaded the twitch files and ran them through something called Video to Video, since all other convertion attempts ended up in lost sync and I have had enough of that with the DB6 files I tried converting, thankyouverymuch [:
Sadly, I don't know very much about transwhatever - we can't all be Fugimans, sadly - but looking at the files side-by-side, I can't say I see a difference in quality.

Dix wrote:Looks like this one clocks in at even more videos (322)

329, If you count tech tests and preshow.

Thanks for the upload! Very much appreciated!
Top

Can you all help me out, who are they, what did they do at desert bus, and what years have they participated? 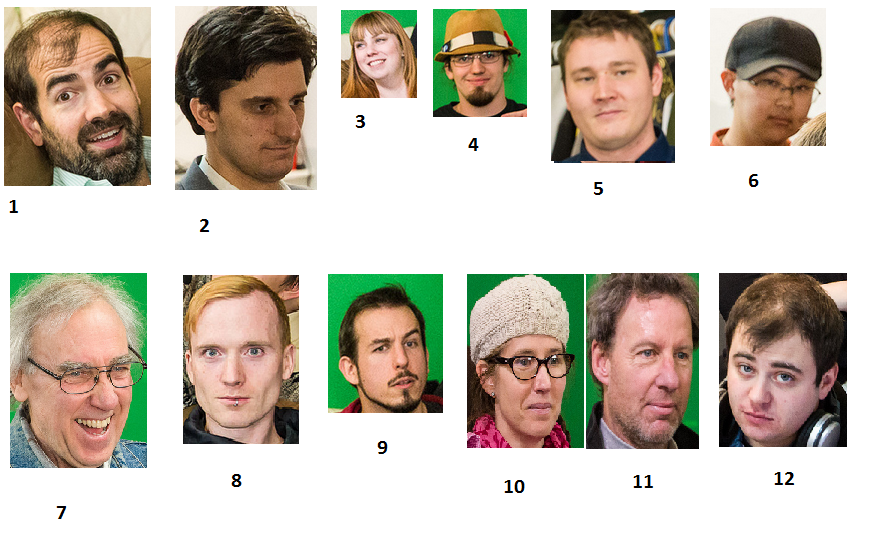 This page will probably be of help.

But from what I can see on there/remember:
1: Never did catch his name, sorry.
2: Mike Whitaker, communications team (he did a lot of the blogging.) This definitely wasn't his first Desert Bus, but I couldn't say how many he's been at before.
3: Note sure.
4: Andre Van Sylke, site volunteer. He's been around since at least DB4, I think.
5: Not sure. Was that Dan from Card Kingdom? I wasn't around for much of his visit.
6: Dan Wu, site volunteer. I think this might have been his first year.
7: Don't recall his name, but that's Bill's stepdad I believe.
8: Matthew Murray, communications team. I don't recall him being there previous years, but he was pretty quiet so it's possible he was.
9: Haven't the slightest idea.
10: She was the Al Jazeera producer, but I don't recall her name.
11: And he was the cameraman, but same thing.
12: Blake (no surname given), on engineering. Can't recall him from previous years.
"Jamfalcon's a super weird name" - Graham

1 is the boyfriend or significant other for one of the guests.

I will try and having the computer that I am seeding with running more often.

Absolutely nothing. Must be my end. Could be a firewall issue. I'll try my other computer, if/when I get a chance.